Alright folks, have some time on my hands so decided to make this guide.

We are going to be wiring 4x 3s lipo batteries to a smart Bluetooth LTT bms (available on https://www.lithiumbatterypcb.com/ ) in charge only to make a 12s lipo. The goal here is to be able to monitor individual cell voltages from a smartphone and charge the batteries from a charge port on the enclosure and not have to take them out every time.

This is the best solution I have come up with for flying with my board and takes about 10 minutes to disassemble/assemble once you have everything set up.

Before you begin, make sure all individual cells are at the same voltage. Verify with a multimeter or use a Lipo charger and charge them to storage voltage. All the images are high res 24 megapixels. Download them and zoom in if you have to.

I will add notes here as and when questions come in.

Take your lipos, and put them in front of you and label them right to left 1-2-3-etc etc like I have done here (top left of each battery). Make sure your balance leads are facing away from you and the positive balance cable on each lead is on the right. These are usually red but use a multimeter to verify. Label the leads as I have done here. 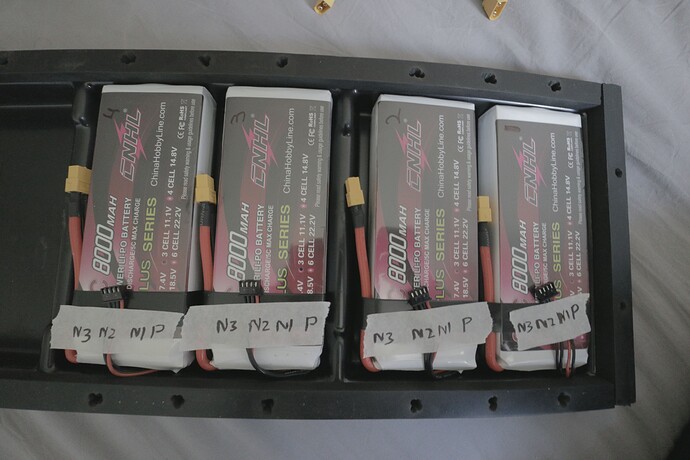 Now, we make a series harness for the main battery cables. This is the one that will connect all the 3s batteries and make a single 12s battery and plug into our vesc. Pictured here. The two shorter red wires sandwiched between the two short black wires should really be black but I ran out. 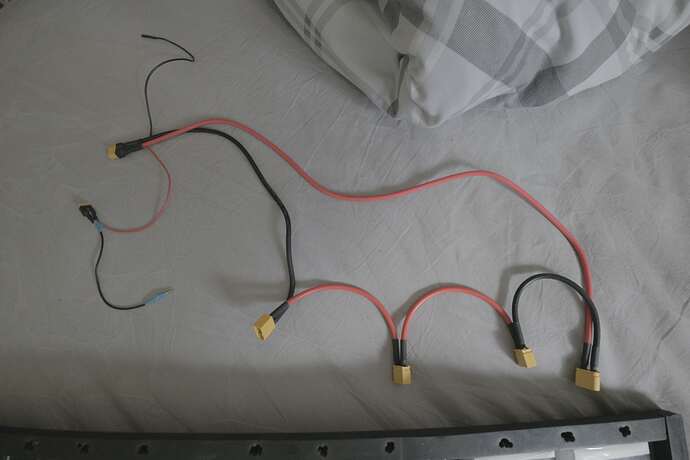 I have spliced 18 guage wires to both the positive and negative of the output end to connect to the BMS and charge port. More on this later. Here is how the harness is wired.

When I say main, I am talking about the thick cables on the battery, not the small thin balance cables. We will talk about them later. Once this is done, plug the wires in and test the total output voltage. It should read single cell voltage x s count. Here my cells are around 4.11v each so it reads 49.3 volts on the output.

Here we need to figure out our balance wires and this throws people off because there is an extra wire in each series connection. Let me explain

The LTT BMS has (s count +1) wires on its harness. Meaning a 12s BMS will have 13 wires, a 10s BMS will have 11 wires etc etc. The extra wire goes to the total battery negative and the other wires go to every single positive cell.

But in this example, we have 4 balance wires on each battery totaling 16 wires. But we only use 13 wires on the BMS. Where do the extra 3 wires go? The answer is that we have to ditch them.

Lets see how. Here, I have connected the series harness to the battery 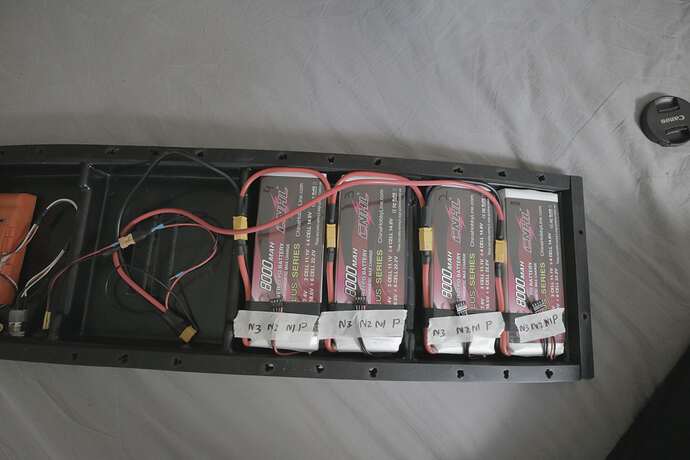 Now that the batteries are in series with a harness, the following wires have essentially become the same wire and we only need to connect to one of them. This is because of the main series harness linking them.

So now that we know three of the wires are redundant, we have lost 3 wires bringing us to the 13 total wires we need. I have decided to Skip the N3 on each battery EXCEPT the last battery losing the three extra wires in process. More Below

This is the most confusing part and I have tried to make it as simple as possible. First of all, I suggest you get balance wire extenders and not solder the battery balance wires directly to the BMS harness because otherwise, you will need to solder/desolder every time you want to disassemble/assemble. Remember, the goal here is to fly and explore the world with your board. 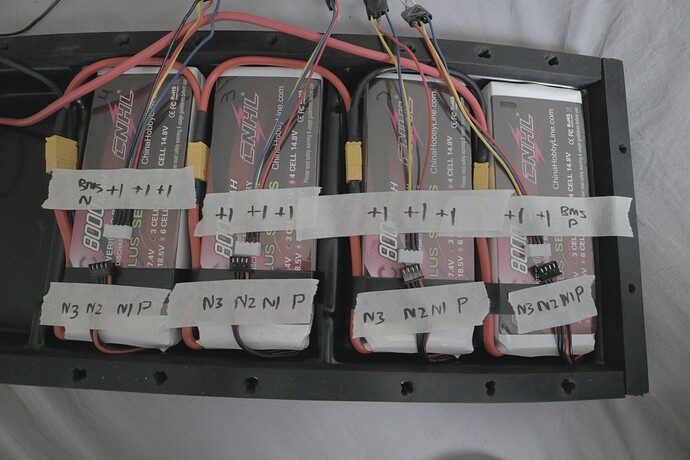 The LTT BMS harness usually has a red wire on one end and a black wire on the other. The red wire is positive and NEEDS to be connected to the P on battery 1. Disconnect the BMS harness from the BMS before moving forward.

Now we have to verify that the balance wires are connected properly. You need a multimeter for this. Disconnect the BMS harness from the BMS and plug the extenders into your Lipos 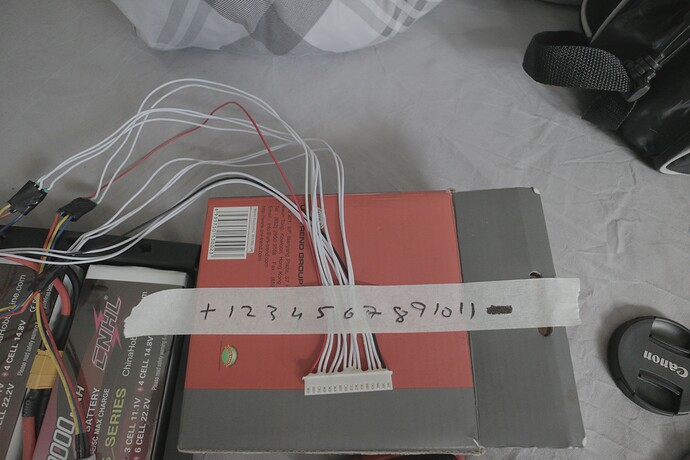 To double check everything with the labels on the harness, let’s say each cell is at 4v for easy maths.

Now we connect everything to the BMS. The general consensus is that battery negative should be connected to the BMS before the positive wires go in. So, before you plugin the BMS harness back into the BMS, we need to solder the B- and C- on the BMS. 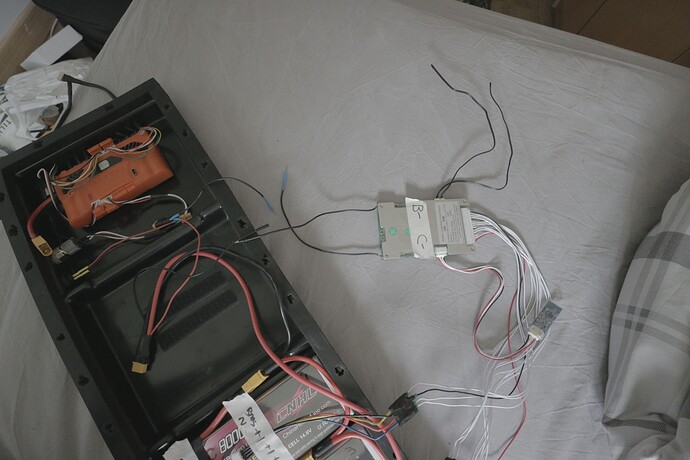 Solder two wires to the BMS on the C- and B- side and add 2mm bullet connectors to the end. Put different color heat shrink on each bullet as I have so you can easily disassemble/assemble them without a soldering iron. In my setup, the black 2mm bullet goes into the spliced negative wire in step 2 and the blue heatshrinked goes into the negative on xt30. 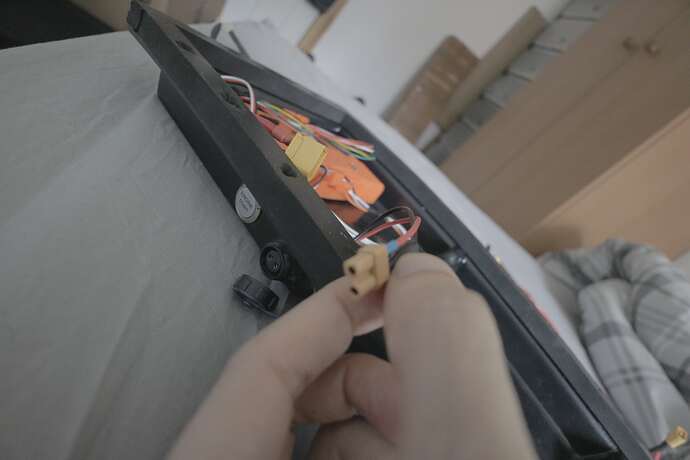 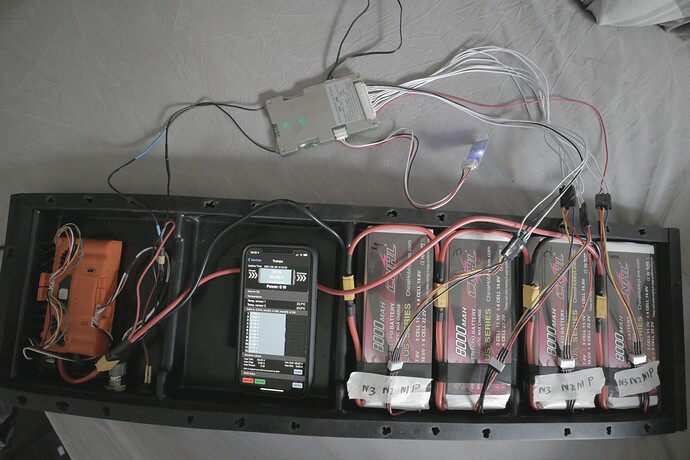 Here is it disassembled for travel. The lipos have velcro at the bottom to attach to the enclosure and I use foam on top of the batteries to avoid them bouncing around the enclosure. 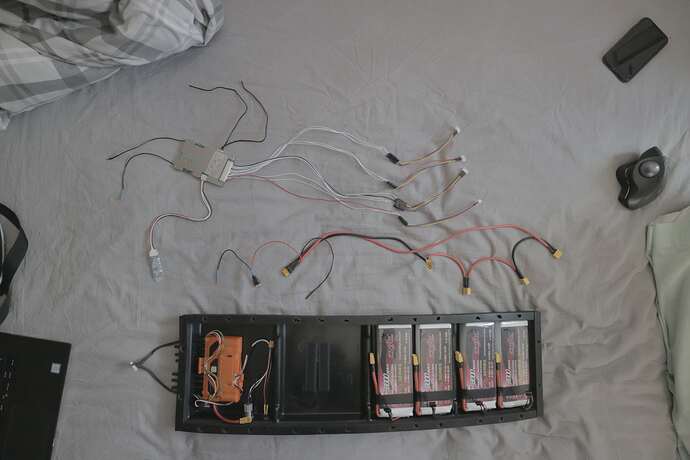 and a final pic to show how it all connects 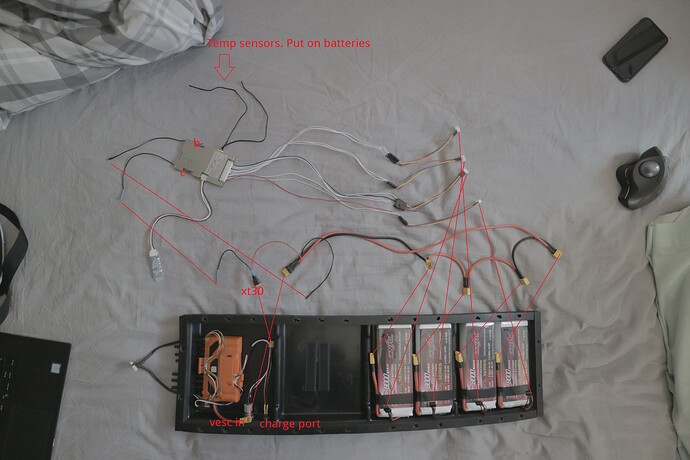 It is always good practice to connect the battery negative to the BMS first before you connect all the positive wires to the BMS. So, in the above photo when everything is disassembled, this is the order to connect them

Just reverse this order when you want to disassemble them.

Why did you call it discharge only? Don’t you also charge though the bms?

Good catch. Its charge only. My bad.

Ignore my last one sorry, I apparently can’t read

Thanks for the useful guide. Appreciated.

Very useful guide, well done.
I just found confusing how you count the groups, usually you start from minus and count from there, where the main positive is the last one (12th).

You can count from either side tbh. Any + between the cells is really a negative for the cell adjacent to it. So long as you test the voltages at the end, its all good.

Great guide and perfect timing, I just started experimenting with lipo and was thinking easier get 2 more b6 chargers than dig about for this info

Let me know if you need any more help. I think with the recent battery shortages, Lipos might make a comeback.

Got a question to ask. My ltt BMS is coming in, my charger charges at 2a, got two 5s batteries that I need to connect in series. My VESC is able to do 30A or 25 continuous, I’ve been told that fuses will be good to have on deck, I’m wondering how many I’ll need, where to put them and what kind should I get

you probably only need a fuse that goes to the charge port, since a fused main battery lead usually just leads to a pop under normal use as I’ve found

3-4A blade fuse or something may be all you need 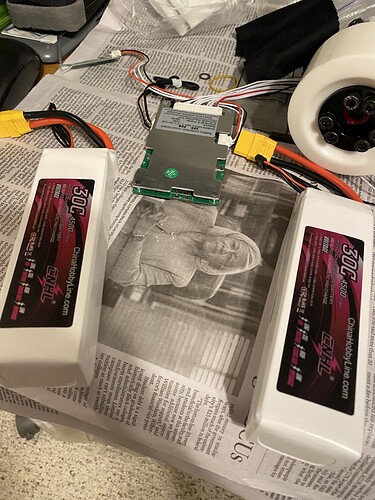 Can you lay out your batteries like this? Label them like I have here. Take a photo and I will tell you what wire goes where.

You want it where I have paper labeled on the batteries or just lay them out in the enclosure, the wires on the back

post a pic of the balance wires on your lipos. 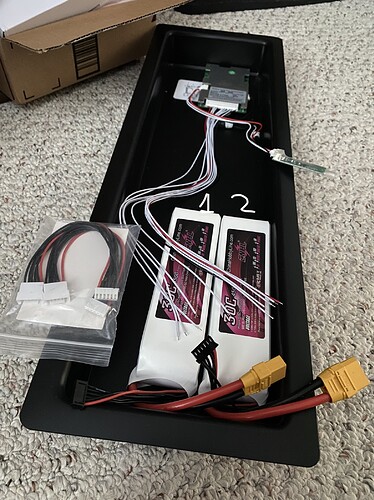 Alright cool. Now put labels on them. Like the pic i showed you. WIll make it easier to follow.