Well, it’s that time again. Another year gone, and another batch of the best esk8 builds on the planet have passed through the halls of our great forum. You know what comes next.

The rules for nominations this year are as follows:

On January 16th we will close nominations and open a voting thread. That’s right, just over two weeks to get your nominations in. Should be plenty of time, go get digging through the DIY Builds section ASAP!

The voting is going to work differently this year. Due to overwhelming popular demand, we are excited to be introducing categories to BOTY!

Here’s how that’s going to work:

The categories this year are:

We are reaching out to the awesome members of our community to secure some dope prizes for the BOTY winner and category winners. If you are a vendor (big or small), or just a private person, and you want to volunteer to donate some prizes in exchange for everlasting gratitude and good-will, please reach out

We will have a thread showcasing the prizes and thanking the lovely donors after the winners are announced, so be on the lookout for that so you can go show our generous donors some love!

This is a fun community event, so lets keep it light-hearted and good-spirited, and please keep it inside this community. All of the builds on this site are awesome, and I for one cant wait to see all the amazing things you beautiful people have made during this shit sandwich of a year

Y’all, to be clear, it’s the builder who decides the category they want to compete in, not the person nominating them.

[image] [PXL_20201231_070229856] About a year ago, Tesla unveiled the Cybertruck. I started and stayed firmly in the “it looks cool” team while everyone kept flip-flopping on what they thought of the first full stainless production vehicle since the Delorean. A month or two later I was bored and thought of how cool it would be to have an esk8 built like the Cybertruck. I was also inspired by @moestooge’s steel tube + “bucket” builds. [image] + [image] So I loaded up inventor and made th…

Hi everyone, This is my first esk8 build, and my first actual foray into skateboarding since I was a kid. The goal is to make a reasonably sporty street board that hits my range target, hopefully around the lower end of the esk8 weight range. Additionally, something I need to work around is the fact that I have tendon problems in my arms which mean that using a remote would mess me up after a few minutes. So, I’m going to use strain gauges and an Arduino to try and make a hands-free control sys…

this one fuckin slapped titties

EDIT:
@xsynatic to be clear; only one nomination per category, or can we nominate multiple? Lotts fuckin contenders man, hard to choose

Thanks!
I agree with the DIY categorization and I am honored to have slapped some fuckin titties

@Flyboy build, someone else already did but I wanted to acknowledge it as well.

I’ll have more later but I’m on my phone, will wait to look around on my laptop for the other notable ones.

In the last few day I’ve done following: Rope that I have ordered has finally arrived, so the remote is complete now [OutRun_4-2] [OutRun_4-3] Put all motor wires into purple/white sleeve: [OutRun_4-1] [OutRun_4-4] Painted enclosure gaske. [OutRun_4-5] [OutRun_4-6] Finished up all of the electronic inside, 3M Dual Lock + White Silicone everything [OutRun_4-7] It was time for a final layer of epoxy and glass frit. I stumbled upon some glitter a day before, so decided to add pur…

i guess this is not happening this year?

Righto Cocks (pretty sure that’s how this is supposed to start) This is going to be long, somewhat detailed, and rarer than hens teeth. I’ll most likely never do another build thread and I probably will keep the builds a little simpler moving forward. Bare with me. I am not known as a good writer and I am sure this will be a difficult read. I supplemented with a shit ton of pictures to make it up to you. This has been the worst build for me to date. There was nothing but road block after …

I like this idea so much I’m donating this Ender 3 Pro for the winner of this category. Just picked it up at microcenter right now (actually weeks ago) 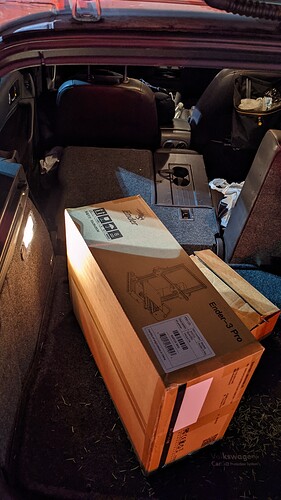 Ender 3 pro for the most DIY winner

How are you gonna gift yourself something?

Well done thread, guys! Should be dickloads of fun.

I nominate @NoWind ’s Psychoframe. I still can’t get over how cool that thing is.

Long time gone without an buildthread from mine, showing in details what ya working with sometimes inspires others to go the same route. Which is very nice as long you dont try to do this for living (-; But i´m missing something … this spirit thing… away from comercial fuck off…, just posting pictures on instagram is poorly shit compared to in deep threads coming back to good old days, showing what i passionated with, something new and innovating ! Worked on this since one year, i will not s…

Suddenly everyone has a “street build”.

[20210530_163003] Deck - Mov-E from @Lukas I remember following the development of this deck waaaayyy back in the builders days. To this day, it’s one of the only integrated decks that I just love the look of. When this popped up as a scratch and dent sale well after the rest of them had been sold, I had to have it

I nominate both the old and new nimblestiff, or is the new one called Frankendick? Idk @glyphiks pls clarify

Y’all, to be clear, it’s the builder who decides the category they want to compete in, not the person nominating them.

I agree with the DIY categorization

Thanks for putting this on the record

Ender 3 pro for the most DIY winner

Incredibly generous, thank you Jackson! We’ll be in touch regarding logistics soon

Suddenly everyone has a “street build”.

That’s definitely a possible outcome lol. I considered having builders send me their category decisions in a PM to avoid having people game out their decision based on the competition, but I decided I kinda like keeping everything public in this thread so y’all can game it out

@moddedlife for this crazy build:

this thing is so above and beyond, truly a work of art.