After the collapse of my first lightning powered murder machine, I’ve embraced the fact that Houston streets are basically an apocalyptic wasteland that require an all-terrain build. The goal here is to build a capable off-road mtb that I can both use in a minimum-weight configuration for launching off hills/curbs/ramps as well as on longer group rides. I’ve chosen most of these parts either for light weight (deck, drive, hubs) or because they’re interesting to play with (NESE, Davega).

To that end, I’d love feedback on where I’ve gone wrong with this modular jump build, before it’s complete.

The only novel aspect of this build is using two NESE battery packs. 1x 12s2p P42A ‘jump pack’ that is permanently installed and 1x 12s3p P42A ‘range pack’ that is added or subtracted as necessary.

At some point in the planning stage, I was convinced this was not the worst idea. Although I’m having second thoughts. Reference threads:

Adding another lipo pack in parallel?

The plan is to use 60 fresh P42A cells in NESE modules, and wire the two 12s packs in parallel to the ESC. No BMS onboard - Daly 12S BMS will be mounted to the 6A YZPower charger and the two packs will be charged individually. No charge port - everything will use XT90s connectors - must disconnect pack from ESC to charge, but that’s easy with the Nanuk case.

(Obviously, packs will only be plugged in together when both are charged to 100% on the same charger. The range pack would not be added on the fly)

Pack config like this, with ESC permanently mounted under the range pack, bolted to an aluminum enclosure floor plate, which is then mounted to the deck. Each pack has its own balance harness: 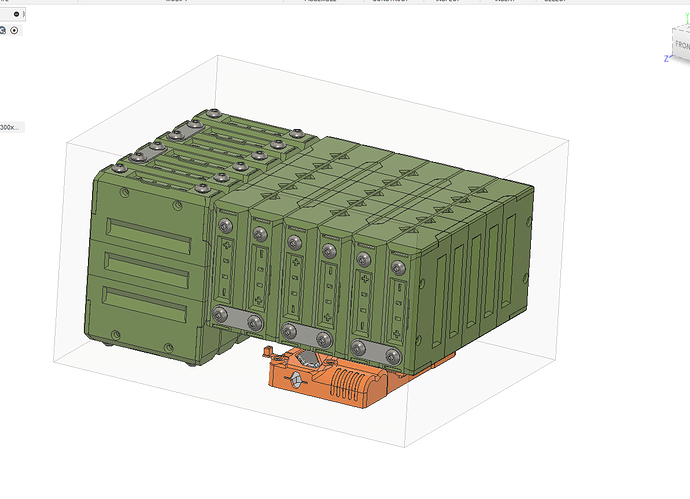 I’m loving all of it! You’re gonna have a fun board for sure. It’d be more work and annoying but that 10s4p could make a 12s3p too.

I think you will be in love soon

Very true. But without a spot welder, that seemed less feasible than chopping 6x 4p groups in half and soldering.

p.s. @Venom121212 you are definitely a main inspiration for this build! Appreciate the advice, photos, and guides

Have you ridden bindings before?
planning on going out with heel straps from the get go?

Personally, I would have 2 packs and make them easily swappable. 12s5/6p(or larger) for a cruising pack and use lipo’s for a jump pack. This would eliminate concerns over paralleling packs together.
Nice build dude, awesome artwork!

This is effectively what I did ^^

Personally, I would have 2 packs and make them easily swappable. 12s5/6p(or larger) for a cruising pack and use lipo’s for a jump pack

Definitely considered this, but I can only mentally/emotionally/financially afford so many esk8 purchases at a time. Modular batteries soothes my need to avoid waste. If I was a smarter man, I would’ve waited until someone (@Taraskasyanyuk) put up a used 12s5p battery for sale and snagged that. Or used lipos, etc etc.

But that also requires buying a lipo charger.

Now that the experts that be have given the go ahead, that this type of dual pack setup probably won’t do anything too funky electrically, I’ve started building for real:

The 2p NESE modules do not stay together very well naturally, since the bus bars are alternating top and bottom, and they’re the only thing attaching module to module. It wants to pop apart like an accordion without additional support. The modules have zip tie holes, but it’s not super easy to use these without really long zip ties, or a lot of them.

This case reduces the # of zip ties down to 2 and keeps everything locked in and aligned.

Also, the super important TPU screw caps! Without these, every bolt is electrically live and exposed. Scary stuff. I redesigned the caps to extend out over the tabs, since they did not cover everything and were super difficult to install (very tight fit).

Enclosure mounting hardware is ordered and on the way. 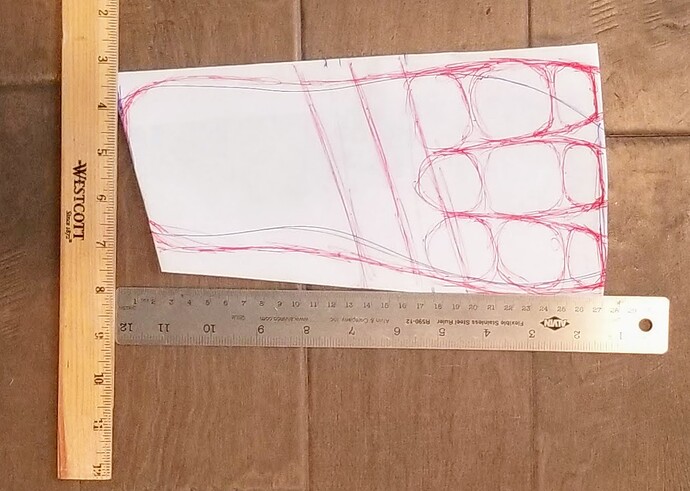 Edit:
Tried a few footprint designs. I couldn’t find one that didn’t look over the top. Went with a simple scale pattern. 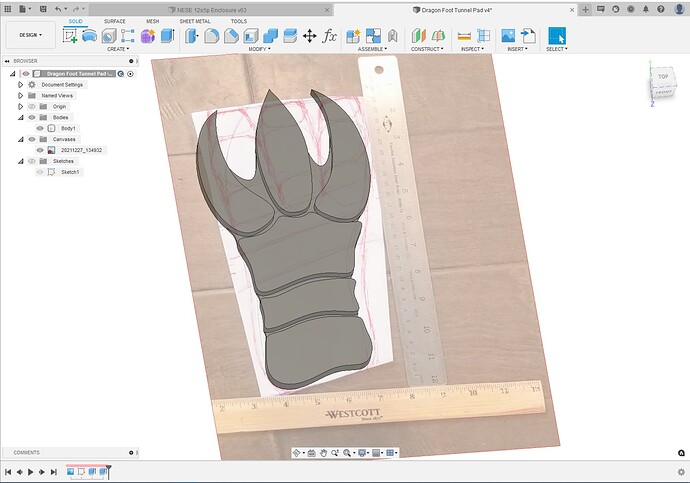 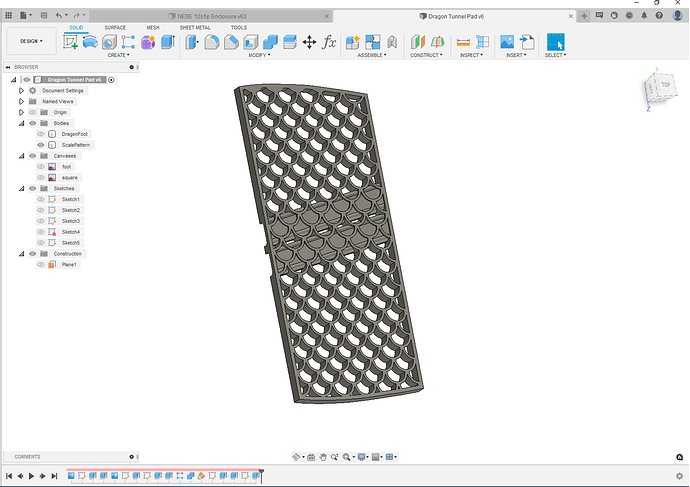 Not too bad. Got the deck edges spot on. For how large the scale holes are, it’s very supportive / not a ton of flex. TPU is awesome stuff. It’s very 2D right now - I could add some chamfers at the edges to improve the looks

Time to tackle mounting the enclosure…

I still use this trick, all the way from grade school art class. Rub a colored pencil over the edges to imprint the bottom of the enclosure onto a piece of paper. Throw the photo into CAD, calibrate, and boom, got ourselves a perfect fit design.

A couple iterations later and I’ve managed to nail down the variance in height between the Nanuk 905 feet and my mounting screws and the curve of the deck.

As I plunge my drill bit through the enclosure, rendering it’s waterproof qualities moot, a thought occurs:
What if this nub is not centered. maybe i should measure. it’s probably centered.

Shocker, it was not centered… Future-me will have to plug that hole somehow.

Drilled out the board and countersunk with an imperial bit - close enough. No idea where to get a 90deg countersink bit at a brick and mortar. No going back now.

The enclosure is now super stable and I love it. Getting close!
If that MakerX DV6 doesn’t staying cool enough inside the enclosure, I’ll replace this TPU spacer with an aluminum heatsink/mount plate and cut out the enclosure bottom.

That’s damn evil of them not to center that nub

I’m channeling you hard on this build brother. I put in two PG11 and one PG9 gland <chef’s kiss> perfect fit for the motor wires. Just barely enough thread on the back side of those to tighten the plastic nuts down.

Time to crimp the sensor wire pins. Using a 6 conductor cable is so much nicer than individual wires.

Run that motor detection before sealing everything up! I learned the hard way

That build is nasty!!! Great job.

Looking nice! Yeah I have a similar one on my build, same idea, different implementation

Nah, unfortunately there are 2 diameter sizes of pneumatic hubs we use:

If you need some 6" ones that fit mbs hubs, you’re looking for the metroboard 155 tires, mboard tires, etc 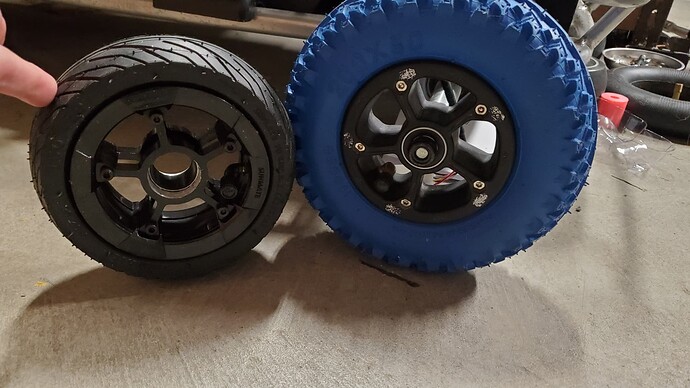 Man I hate supporting mboards, but they’ve got the right price. Where you do pickup your tubes with the perpendicular valve stem?

Edit: these are quite nice:

Man I hate supporting mboards, but they’ve got the right price

It was stupidly cheap on black Friday. $67 for a set of 4 tires and tubes was too nice to pass on