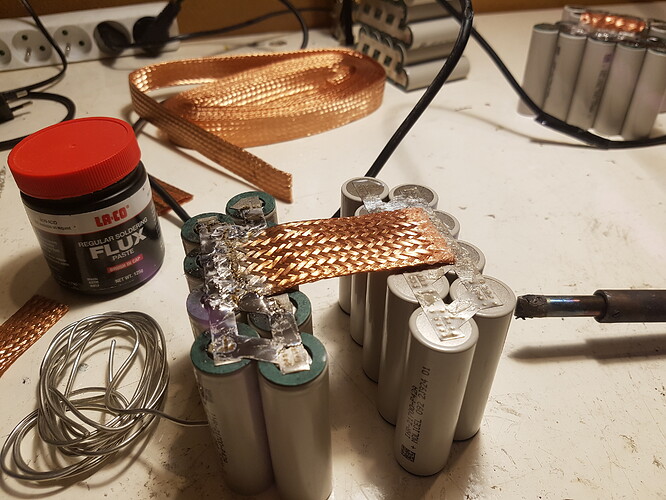 You cannot use 2 different types of cell in the same battery, it would have to be either all P42A or all 50E

I mean technically yes, you can put anything you want into a battery, including but not limited to a 11p comprised of 7 lemons, 3 mangos, and a kiwi if that’s what you really wanted

But the issue arises from the way energy is distributed throughout cells in parallel. If you have an 8p of 4x P42A and 4x 50E you would see the same voltage across each cell since they are in parallel, and each cell would drain at a fraction equal to the cell’s capacity over the total capacity of the while parallel group (sum of all capacities in the parallel group), but that means the 50E would have to supply 125% current relative to the P42A to maintain equivoltage as they discharge, and the 50E is only good for maybe 20% of the discharge current of the P42A so the pack would be limited to LESS than the max current of a 8p parallel group of exclusively 50E cells and it would still have a lower capacity than the 8p 50E parallel group

TLDR: mixing cells with different capacities and discharge limits is really bad for the cells

it’s to technical for me, I let @Booya answer this

If it’s too technical for you, you should not be making recommendations to other people that could endanger them.

Have you tested this? Because I would assume that the 50E cells would sag more, so the molicells would compensate by supplying relatively more current. I.e., the current per cell won’t be distributed equally, because the higher power cells have less internal resistance.

Just wondering, because I’ve contemplated doing a mixed pack myself one day

Edit: You know, the more I think about this, the more I think maybe you are right. Because for the higher capacity cell to give its full capacity up, it would have to take a majority of the load at some point or another, and that would mean using it past its recommended rating

Yeah, probably in reality that just means it wasting its energy in heat.

Wow, ok…
I replied because someone that has studied electronic told me that it’s doable.
But nevermind, if i’m not, in your opinion, in position to talk about this because i’m not a “pro”, then i’ll leave the conversation here

That is a fair point, the 50E voltage will drop as they supply more current and the P42A will back charge the 50Es so they maintain equivoltage, but you still will have the issue that your capacity and current is just objectively worse, and it will generate a lot of byproduct heat

Definitely not agreeing with you, as in parallel groups the load is distributed just as if you had one big cell. Doesn’t matter as long as you respect the cumulated specs of the P group.
The p42a will have lower internal resistance and will supply what it can at a given load, and the 50e will do same.
In your given example, the 50E which should output to much current will have higher internal resistance and sag, so the impossible ( because same parallel group) voltage drop in regard to the not-sagging p42a would instantly make current flow from the p42a to the 50e. So nope the current is not necessarily the same coming from each cell

I have many packs made of 30Qs and 35Es made this way, with proper cell fusing and it works flawlessly.

Guys give him a break haha, and don’t worry I have professional experience in a battery building company. I even know brands that do this i’ their packs. The main reason this is not widely used is because it is easier in production to use one cell and cheaper to buy in bulk

You are still limiting the current of the P42A to the inverse ratio of the sag capacities of the cells by the current of the 50E, so either you are decimating the chemistry of the 50E to get it to sag enough to supply most of the current from the P42A or you are voiding a lot of the energy as heat when the cells rebalance at times of low current draw. I still firmly stand that it’s a dangerous way building batteries that results in worse performance and higher risk, if you had asked me a year ago I would have agreed with you but after taking several electrical engineering courses and doing a more research into lithium battery chemistry I stand against it

But it’s your battery and your choice what to do, but if anything happens you are putting people at risk and making the rest of the community look bad. Hoverboards already did enough damage from lazy battery manufacturing, lots of us are already violating the law by making and riding eskates as it is, we don’t need any more attention from people trying to take this away from us

Yeah well I’m not interested in comparing my degrees with yours, if you are so sure don’t do it, stay safe

I’d demonstrate this for you if interested, even though I think it’s quite simple to understand, it’s the exact same thing as if you said you couldn’t use different references of electrolytic capacitors in parallel.
Both are chemical reactions outputing electrical energy. Just add the specs, no need for overcomplicated interpretation I swear!

What are your thoughts on the topic @Battery_Mooch?

so either you are decimating the chemistry of the 50E to get it to sag enough to supply most of the current from the P42A or you are voiding a lot of the energy as heat when the cells rebalance at times of low current draw.

That is the whole thing : there is no rebalance nor sag! The cells are parallel, one can’t be lower in voltage than another one.
Just imagine it like super slow mo in your head, like how would current go it’ll make sense

I love that we are having technical debates here, this truly makes this community what it is

Based on the current the cells should be draining at the 50E should have around 3Wh to maintain good chemical reaction rates, so you are loosing more energy than a P42A for each 50E cell assuming a 1:1 ratio of cells in the parallel group

Oh for sure, where would the fun be if couldn’t discuss things

Very good point actually, this is true it would be an issue if the load was above maximum cell output current throughout the whole discharge then the 50e would have to empty itself faster.
But to be honest this is practically never happening, and their is no absolute maximum current for a cell. It’s only a matter of heat. Moreover, it will never pull that much juice. And for small differences ( p42a and 50e or 30Q a’d 35E ) it’s safe.

Yeah a 4:4 split P42A and 50E pack is fine for anything under 71A in theory, the numbers depend based on the actual functional rating of the cell but once you start pushing above that limit you can get into cell degradation territory. But at that point you might as well have just an 8p 50E and get all 78A and the extra few Ah of capacity