Homage to the heritage

I wanted to tell you about a little personal project I kicked off lately. It’s a tie-in with my brother-in-law, F1TechArt. His amazing artwork around motorsport and F1 in particular can be seen adorning the walls of racing circuits and sports car garages all around the country.

We’ve taken some classic motorsport liveries and imagined them on esk8’s. You might’ve seen a few early renders on the Pictures topic already.

I’m kicking off this topic for a few reasons. I want to share the designs we’re coming up with and I really want to get your input and feedback. I also want to share the lessons I learn from actually skinning the designs so that you can avoid any mistakes I make and do a top job yourselves as well.

It goes without saying that the original inspiration for this was Sender’s amazing work which really sets the standard in beauty and quality. My first attempt at skinning & fritting was pretty satisfying and I was really happy with the results. I learned a lot from that. I also picked up some great tips from the write-ups that Glyphiks and Rosco have shared on FreeSk8.

I’ll be applying our designs to @EboardSolutions phenomenal Flux Motion deck. The shape of that deck is fantastic, the contours are beautiful and it offers plenty of real-estate to get all the details down on. 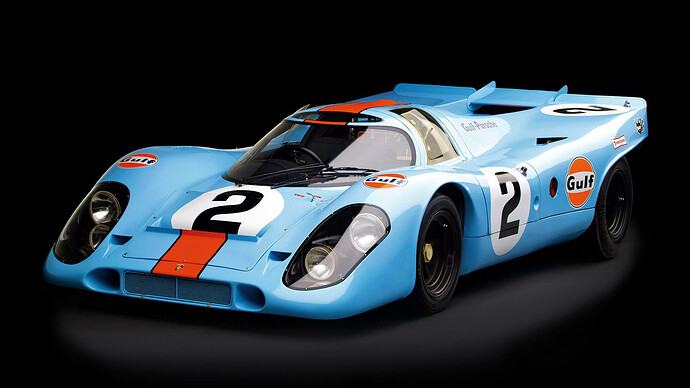 Gulf is one of the few brands to be easily recognisable by its colours alone. If you’re into cars, blue and orange means Gulf, and that’s despite the fact that Gulf officially ceased operations 36 years ago! 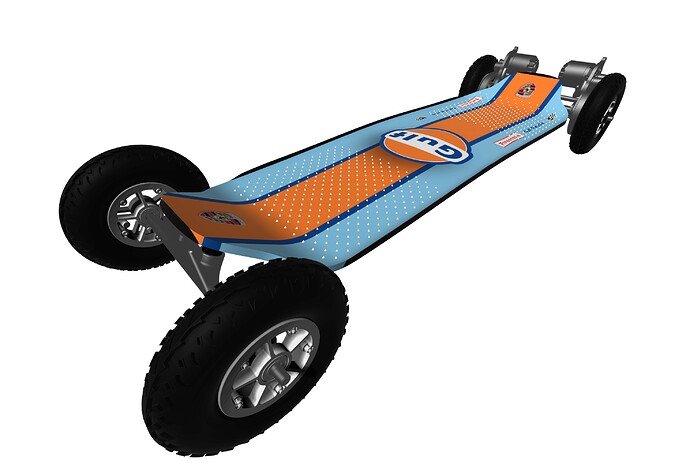 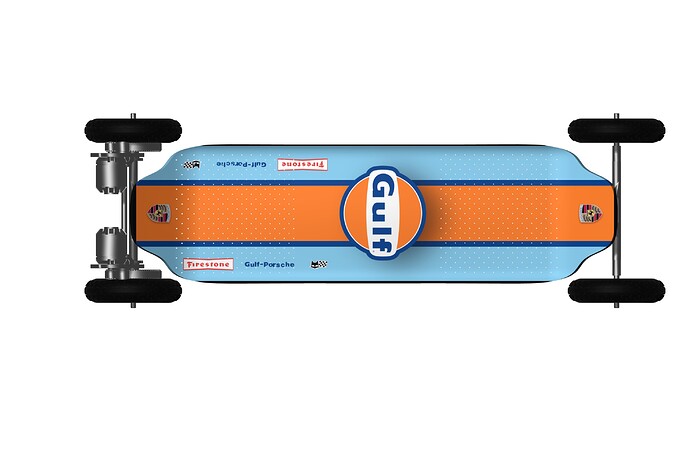 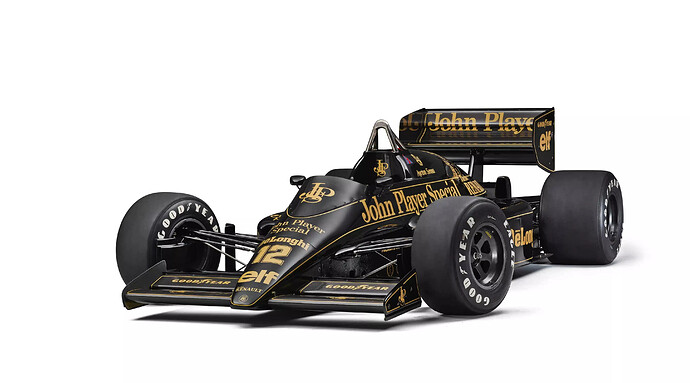 The Lotus Renault 98T was Team Lotus’ contender for the 1985 Formula One World Championship, driven by Ayrton Senna and Johnny Dumfries. Its 1.5l V6 was said to have produced more than 1000 horsepower during the race, and over 1300 BHP in peak qualifying trim, making it one of the most powerful engines ever used in Formula 1 history.

The 98T was also the last Lotus to be powered by a Renault engine as Lotus switched to Honda for the following season. It was also the last car to carry the iconic black and gold John Player Special livery as the next year title sponsor Camel came in to paint the cars completely yellow. 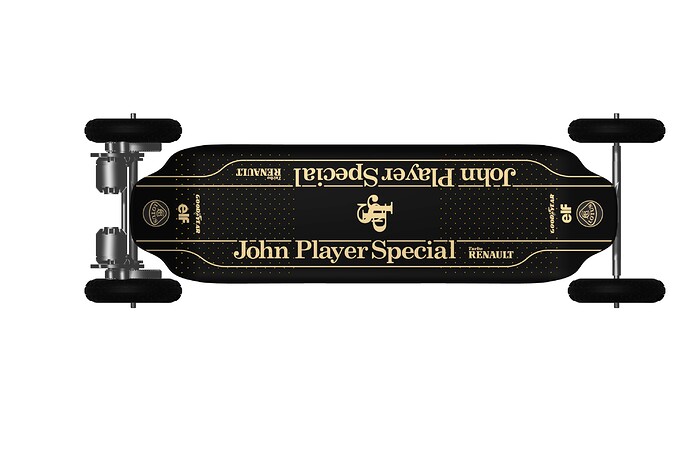 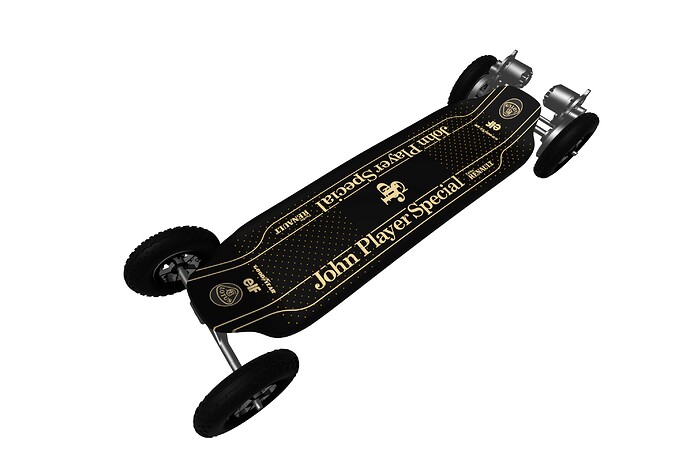 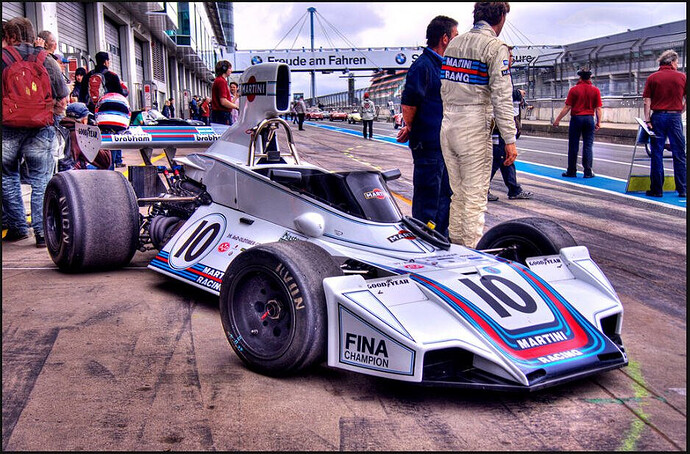 The Brabham BT44 was designed by Gordon Murray, the legendary designer of the revolutionary BT46 ‘Fan Car’ and the McLaren F1. The BT44 followed Murray’s ethic of simplicity and aerodynamic cleanliness. It represented his first work with side skirts and air-dams on the car, a precursor to ‘ground effect’ aerodynamics.

Martini’s sponsorship of Brabham marked their full-time return to F1 sponsorship in 1975 after a brief and failed foray a few years earlier. The initial colour scheme incorporated the iconic Martini colours on a white background with the colours appearing on a red rosso corsa background in the years following. 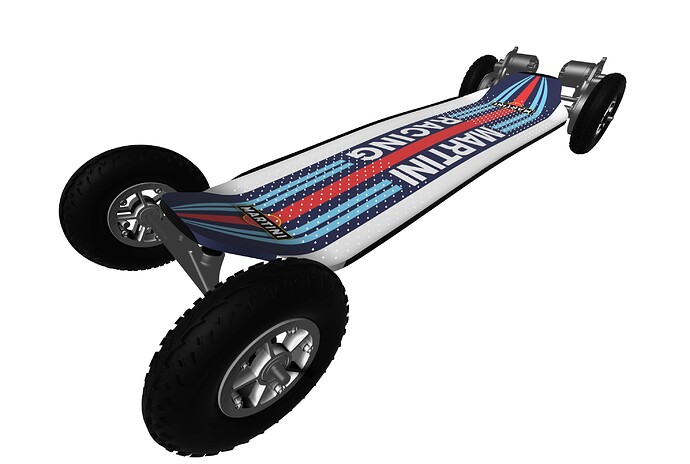 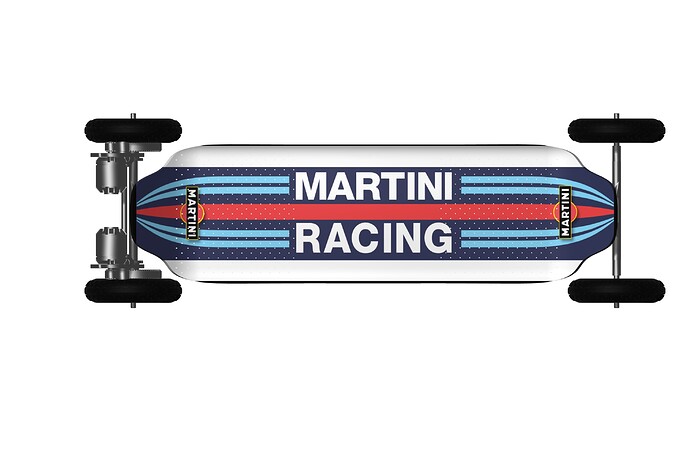 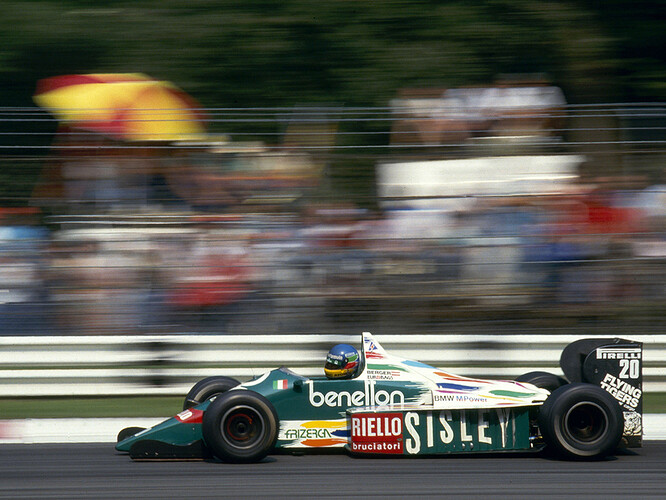 The Benetton B186 was the first car to be built and raced by the Benetton team. Driven by Gerhard Berger and Teo Fabi, it set two pole positions, three fastest laps, and took first place at the 1986 Mexican Grand Prix.

The B186 is possibly the most powerful Grand Prix car ever built. The B186 could produce over 1400 hp in the qualifying trim of its 1500cc 4 cylinder engine. That set it about 600 bhp above its competitors at the time!

The livery was the first and arguably the most attractive of the Benetton-themed liveries spanning the four years before Camel tobacco took over as main sponsor… making it the second time (since JPS) that Camel destroyed a classic livery! 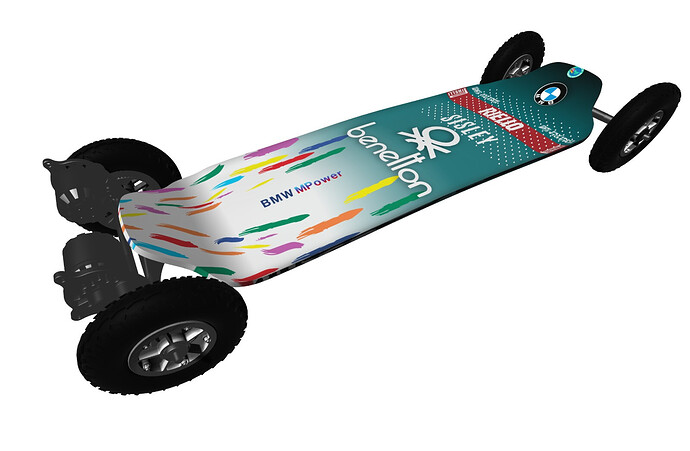 Dude I wa slike “Oh that’s a sweet idea” then “Oooh nice renders” then I saw one sneak pic and I was like “WTF he’s doing the liveries IRL ? THAT’S FUCKING INSANE!”

Your bro and you have my full support for this project 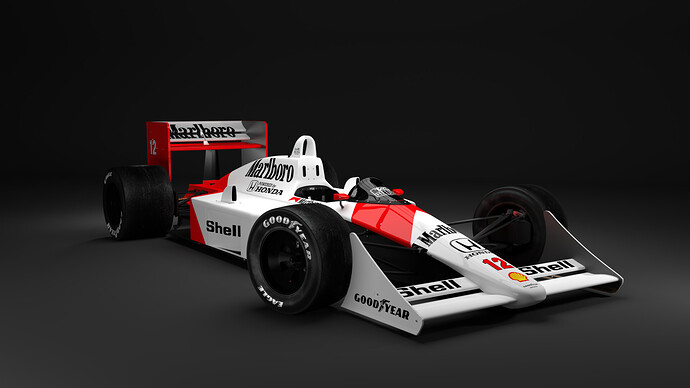 The McLaren MP4/4 is one of the most dominant cars in history of the sport. 15 of its 16 races were started from pole position, 15 of its 16 races were also won and of those, ten times it was 1-2 finish for McLaren. McLaren finished the 1988 season with a massive 134 point lead ahead of the 2nd placed Ferrari team and achieved a record speed for that season of 333 km/h at Hockenheim. The car still retains the highest win-percentage of any F1 car ever with 93.8%.

Marlboro was the title sponsor for McLaren F1 for the 23 consecutive seasons from 1974, but it wasn’t until the MP4/1 of 1981 that the chevron layout of white-red-white-red, stretched across the length of the car. That livery then remained largely unchanged for 16 seasons.

One of the challenges with porting this livery to esk8 is trying not to end up with a deck that looks like a pack of fags. I need your help with this. Lmk what you think of the current prototypes in the poll below…

Btw, if anyone has better 3D models for the trucks, wheels and drivetrain, I’d love to use them in future instead! 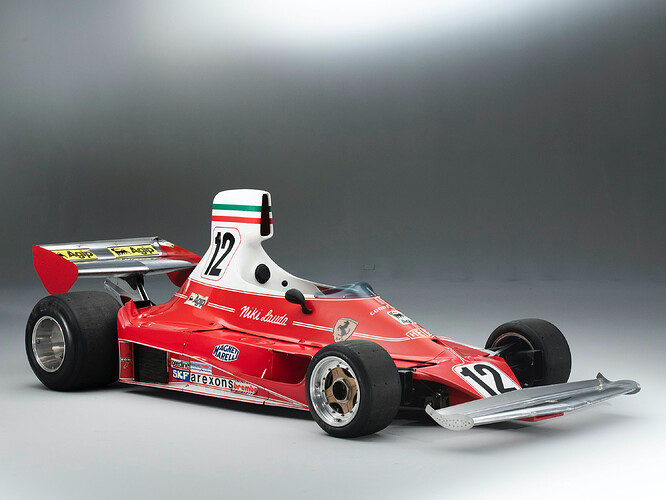 The Ferrari 312T was raced in 5 different versions from 1975 until 1980. The 312T series won 27 races, four Constructors’ and three Drivers’ Championships, making it the most successful series car in the history of F1.

The tall airboxed 312T was driven by the legendary Niki Lauda and Clay Regazzoni. Lauda won 4 out of 5 races mid season before snatching the title at Monza by finishing third. Clay Regazzoni’s win in that race secured Ferrari its first Constructors’ Championship in over ten years. Lauda went on to win the US Grand Prix at the season’s end to cement Ferrari’s F1 superiority in 1975.

Niki Lauda’s notorious crash took place the following year in the Ferrari 312TB during the German Grand Prix at the Nürburgring. Despite coming close to death after inhaling hot toxic fumes and suffering severe burns, he raced again just six weeks later at the Italian Grand Prix and went on to come second only to his team mate James Hunt by a single championship point.

The 312T was the last car to run large areas of white in the livery until 1993 when it was reintroduced for a single season as part of a Marlboro-dominant sponsorship livery. Interestingly, Ferrari’s signature rosso corsa red was also replaced by the Marlboro red, which has remained ever since. A 312t inspired livery was also adopted in 2016, reintroducing the white airbox and the Italian stripe details. 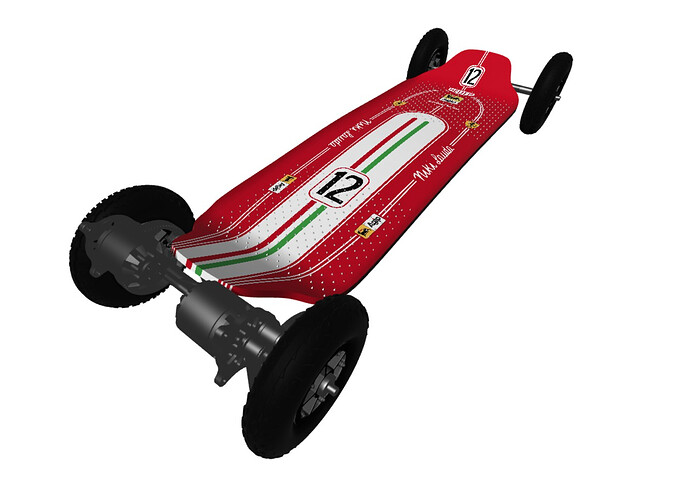 Please check the poll below and let me know what you think!

This design is true to the actual MP4/4 livery but I don’t know if I like the rearward pointing chevrons and the way it butts up against the Goodyear decals. The Shell logo will also need to come down the tip so it doesn’t get covered by x-plates or whatever. 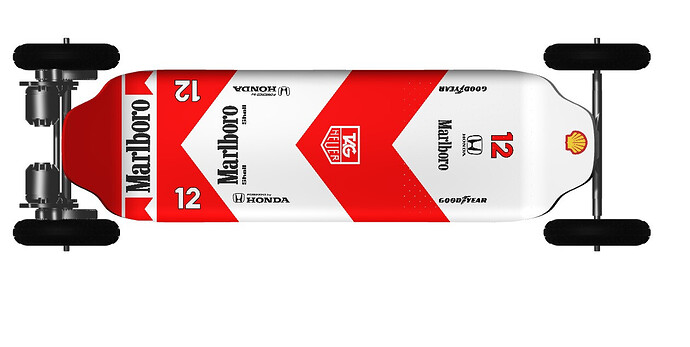 We’ve flipped the forward chevron here and used the point of the TAG logo to provide some continuity with the rear chevron. This is definitely my personal favourite.

So which is it to be?

peak at where I am on this…

This looks great, good work! I find it quite challenging to keep those lines straight, solid work

.
Whatever you used for grip there is pretty cool, nice layout on them as well. Can tell you’re very meticulous.

I’m stunned at how clean that looks. Great work so far. Those grip spikes. Can you elaborate on that? That looks so cleaannn

that gulf porsche 917 is stunning 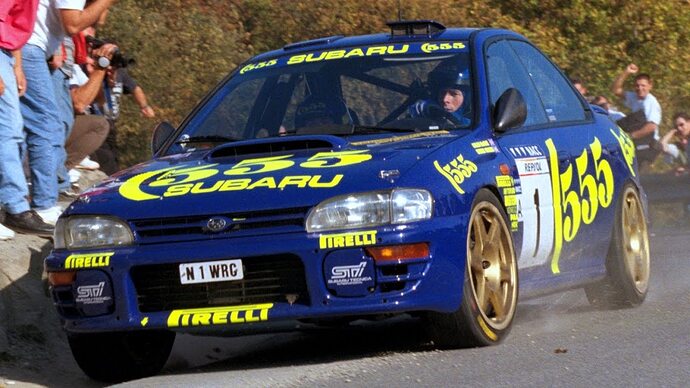 This is super cool!

Thanks for the kind words, everyone. I really appreciate it! Keep 'em coming!

I’ve added a few ‘Sneak peek…’ sections to the feature posts above. The Benetton, JPS & Martini skins were all printed as well and they really look stunning. I mean, they came out way better than I think I expected. I went for a heavier satin fabric this time and I’m glad I did. The quality is fantastic. We maxed out the resolution of the images we provided to the printer and they really delivered. Every curve and detail is smoother than KY on glass. The colour reproduction properly pops as well. Take a look.

So yeah, the studs. I’ll give you guys the complete lowdown on that. I’ve got a few reservations about that’s all gonna work out… but anyway, I’ll be back later to tell you all about it and I’ll share some photos from this weekend’s progress on the coating layers. I’m grinning like a schoolboy at how sexy it’s looking!

@Turt_Turt23 - dude, it’s such rich mine of options, isn’t it? Subaru 555 is definitely on the list but I’m not familiar with the one(s) below that though. US motorsports don’t seem to travel very well outside of the US (…and I expect the reverse is true as well). I’ve been looking at this article though and there’s definitely some familiar stuff in there that I’d love to get to. I think the only one that’s off-limits is the BMW M livery cos Lacroix has already nicked it!

Does it hold its shape better to help with the sharp lines?
Also is it less transparent/more color saturated so less white basecoats are needed?

I’ve been using spoonflower satin, but am all for finding a better fabric if it helps installation.

I’m not familiar with the one(s) below that though

That’s the Falken motor sport livery. They do all kinds of motor sports like off roading and track driving, but they also do drift and that was one of the first images that popped up, and that’s the three falken cars in formula drift