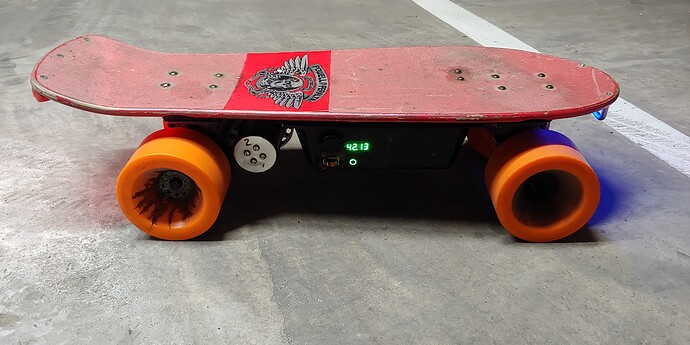 This is probably the 4th complete rebuild of this skate, the only original parts at this point are the deck, griptape, and handle. It’s the oldest in my fleet of five shortboards. (But now also the newest, ironically) 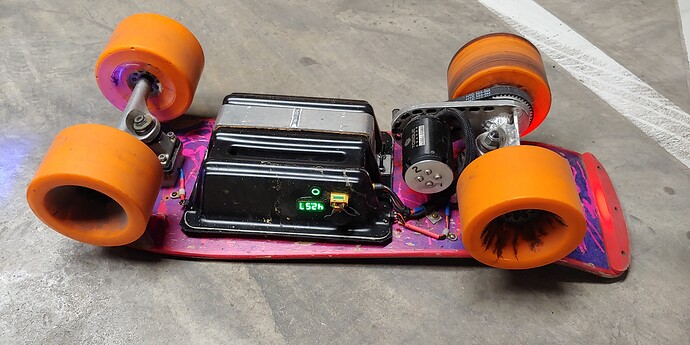 Welp this is my only shortboard currently running TKP. I guess it’s not my favorite thing, but it definitely rides differently because of that. It’s real “divey” and doesn’t turn much at low lean but once you get it leaning over it starts turning more and more. It’s similar to a polynomial throttle curve. The more lean you apply, the more the lean affects turn angle. The RKP are more linear where the lean is almost directly proportional to turn angle.

This board is water resisted. The whole enclosure has zero holes. Even the top has a piece of sheet rubber laid across it and stuck to the enclosure with butyl tape, before being bolted to the deck.

The heart and soul of this build is its deck and wheels. That’d be the Powell-Peralta Bones Brigade Lance Mountain Future Primative Reissue deck and some prototype 83A 130mm @torqueboards TB130 polyurethane longboard wheels. (nod to @ahrav) 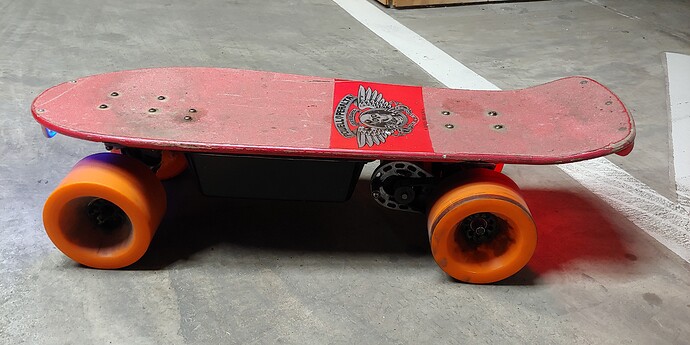 There is a tiny XT30 loopkey on the front of the enclosure turns off the lighting system and voltage gauge (when pulled) for Stealth / Max Range mode. (You can barely even see it in these photos) 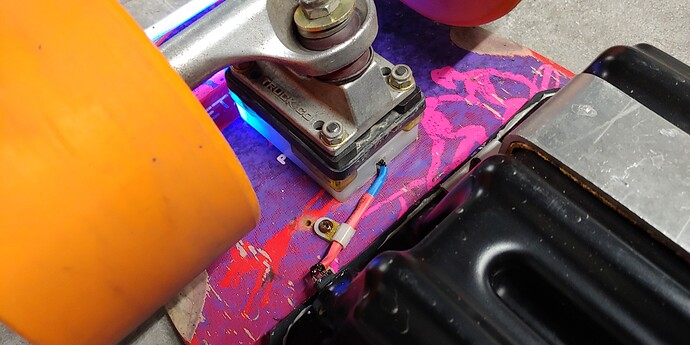 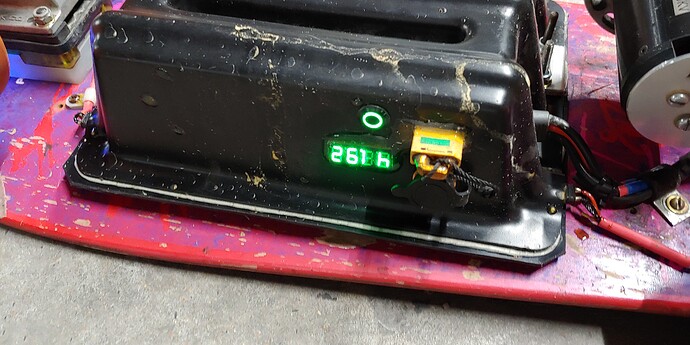 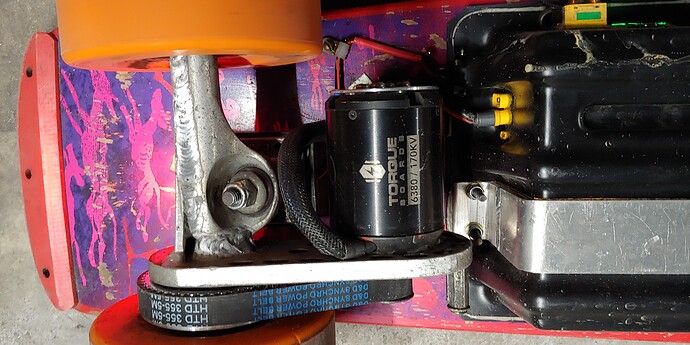 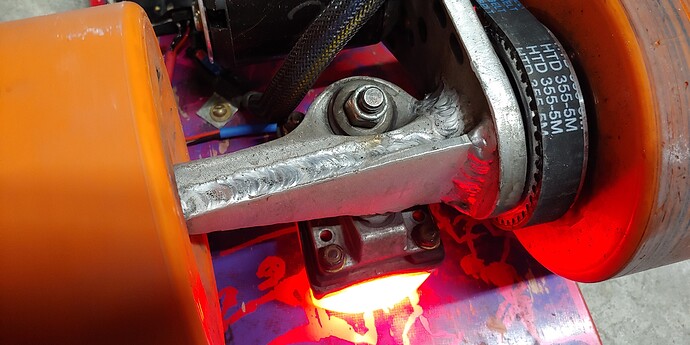 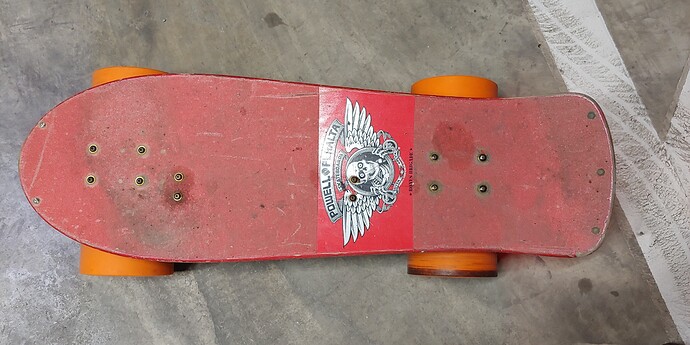 Love your monster truck short boards!!! Have you used inserts to mount your enclosure?

Have you used inserts to mount your enclosure?

No, the enclosure doesn’t actually bolt to the deck. It has a groove across it, and an aluminum + cork strap bolts to the deck and it just hangs there.

How many motor amps are you pushing on this build?

Thanks for sharing this really nice build. The 170KV TB 6380 motor is my favorite motor of all time. I’m a pretty hefty guy and that thing pulls like a beast.

How many motor amps are you pushing on this build?

I just added the settings above.

Why I used a Trampa VESC 6 … so originally I had wanted an IMU in here for something I had planned in the future, a future upgrade. I had custom installed a big thick aluminum thermal mass on the ESC. It was at that point I plugged it in, and discovered there was no IMU in this VESC 6

Trampa why u do dis 2 me

So without the IMU I had no reason to use the Trampa ESC … and decided to use a TB6 or Unity instead… at that point I realized just how much of a hassle it was going to be, to remachine the thermal mass to fit a different ESC because none of the holes are the same and it was installed at like a custom 18 degree angle or something. I loudly exclaimed “fuck it” and put the VESC 6 in there because I didn’t want to deal with re-machining the aluminum block.

Pics of the guts?

29.2A battery max? Quite a specific number?

Unfortunately I didn’t take enough photos, but I did snap one right before I put the lid on 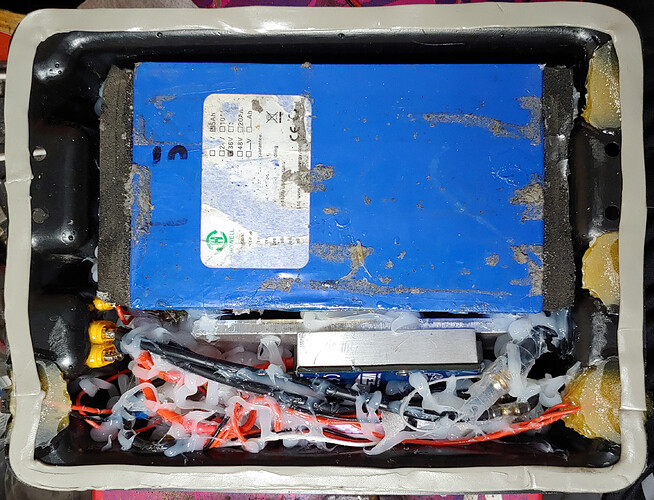 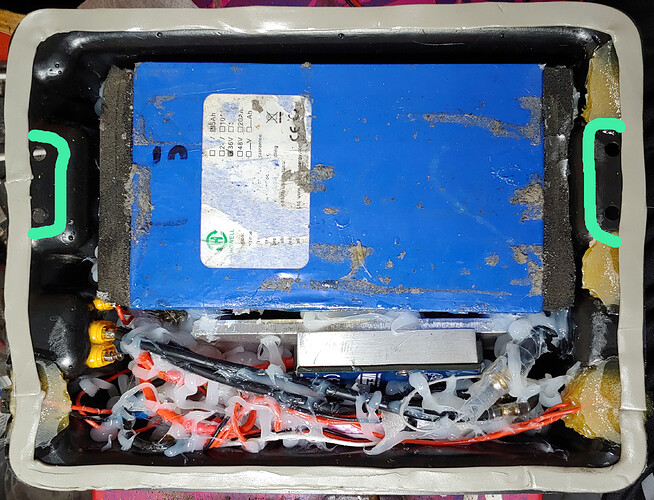 29.2A battery max? Quite a specific number?

Yeah this BMS has a 30A cutoff in discharge configuration, so that’s as close as I want to push it. There is also a buck converter powering the lights so in total should still be at least 500mA under 30A. The BMS also doesn’t cut off until a bit above 30, but just to be safe.

…been there done that

Actually , not done it but i wanted the same; my Lance Mountain board could’nt handle/fit/hold a decent battery

@Frankenstein did you try standing the cells on end? These decks can hold 50 cells without too much problem. (with 107mm+ wheels)

I love the welded motor mount.

It was on old welded Metroboard mount/hanger but as I’ve had those break I had some extra metal welded onto this one to make it rock solid. It’s thicc.

For real? That fits 50 cells stand up style and its rideable? Thats more than enough imho.