I wasn’t sure where to put this as other gauging interest topics seem to be under vendor corner or group buys. I have no interest in becoming a vendor per se but its a new product so not fully a group buy. So, hold my beer, this is going to be a bit long…

Let me first start off saying I have never ridden DKP trucks, at least nothing traditional which all seem to be drop forged gullwing knock offs and I know there is a bit of hate around those for many people. Hell if I had to ride the same Indie TKP trucks I use for push boards with an ESK8 I would probably be a RKP lover. But I started with surf-rodz TKPs for my ESK8s and RKP always feels like a step back at this point. I like carving. That said, SR TKPs lack stability on the rear truck with the bushing cup actually designed to “slide” (compress) the bushing side to side in the cup. So I designed new bushing holders that can take a chubby bushing: 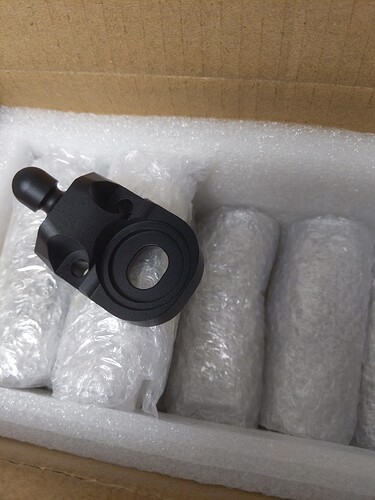 These vastly improved my stability on my TKP build, My Deadly Sin Then I built out my Rayne Demonseed build, Evil Demonseed and suddenly TKP didn’t feel right. Neither did RKP, as it turned like an oil tanker. So I went the next step and used a custom DKP mod I made for the surf-rodz trucks: 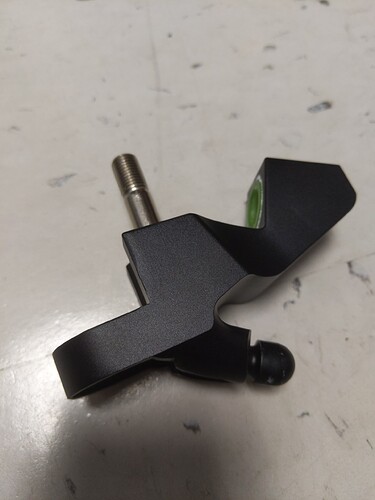 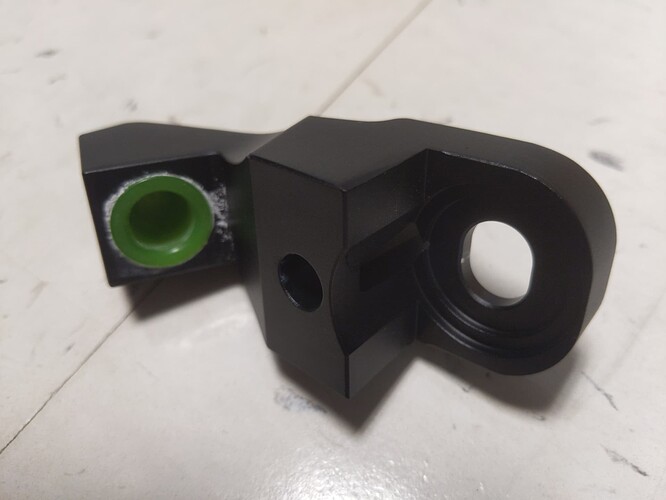 Like I said, I have never skated DKP trucks before, so I have no idea what they should feel like. But I know what these feel like. Fucking awesome. I can take 90 deg turns on a sidewalk and even do full 360s in the width of a parking space. On a 42" demonseed. And stable as fuck. I ride on campus and usually only hit mid 20mph max. But my girl who gets to ride downtown St Pete hits 30mph on this deck with no speed wobbles. On her RKP setup (split angle 45f/35r) she gets speed wobbles at about 25mph.

Anyway, I have to put a pair of DKPs on her Bustin Sporster build now, so I thought to myself why not tweak the designs a little to make the DKP piece a little more compact and get rid of the main failure point of SR TKPs at the same time (hanger bolt snapping), so I designed a replacement hanger as well (177mm hanger length, takes 10mm axles from BN or shoulder bolts). 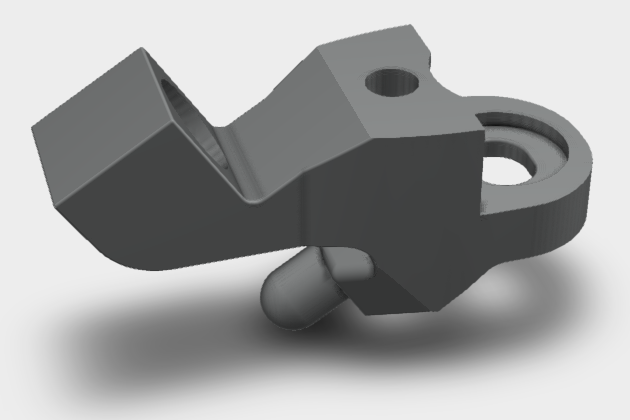 I was getting ready to reach out to the CNC company I use for a quote but decided I would see if there was any interest in the community for a pair. Based on what I’ve had made in the past, I am guessing around $95/ea for the DKP pivot piece and $120/ea for the hangers. They would need SR baseplates (although I’ll design and price baseplates to see if there is a savings there). Pricing looks to be $342+shipping for a pair (including baseplates). Motor mounting hardware is the same as SR TKPs, without the bolts snapping.

The more I order, the cheaper they will be and I have no plans on profiting from this beyond getting my three sets for a cheaper price.

I’m currently printing out the models to verify everything and do any tweaks to the designs before sending them off for quote, so I’ll leave the poll going until 8/13/22

Got pics of it on a board?

These are the first revision using SR hangers and my bushing cup. Second revision will be one solid hanger/bushing cup and the slightly more compact DKP 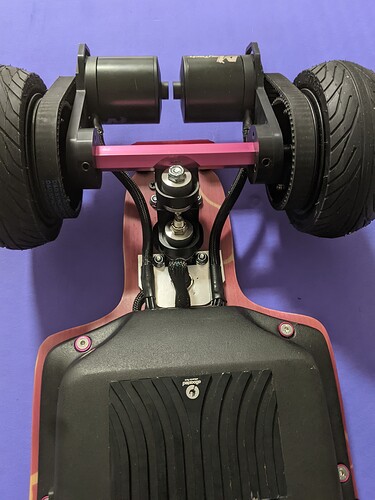 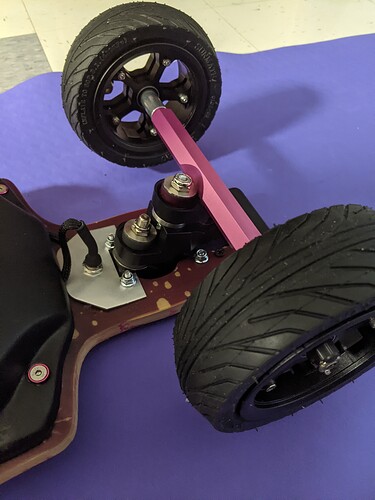 I’m intrigued but the undercut you have on the pivot nose has me worried, most TKP/DKP failures I’ve seen are that fracturing

But it does look like a neat truck, I will give you that for sure 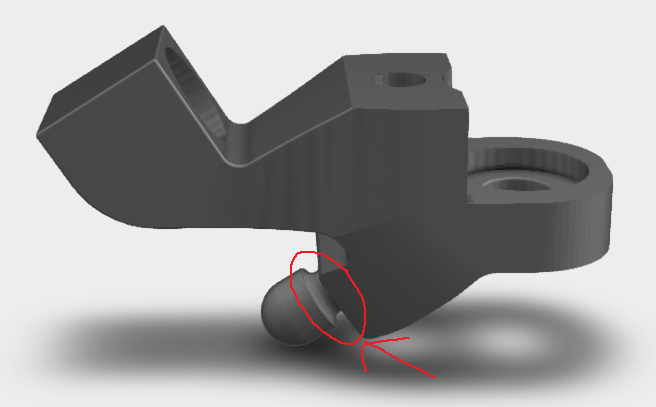 It’s the same dimensions as SR uses which is actually a larger pivot nose than most cast or forged trucks, I think the undercut diameter is the same as an indie truck pivot nose diameter, except these are CNCed so stronger. I haven’t heard of any pivot nose snapping issues (nor had any problems), but if it has been an issue with SR TKP trucks there is still time for a redesign as needed.

I’m not a DKP fan — at least not on the rear trucks — but there is a very important advantage they offer: they can greatly ameliorate wheelbite problems with large wheels.

Only way I’m running 7" pneumies on a Switchblade

But they are kinda scary

Great idea this. Personally I love dkps but anything over 30mph and I poo myself. That’s just me though. There is something to be said for a tight 360 though.

My next build is on channels otherwise I’d be in for sure. Keep up the good work sir.

While my google searches couldn’t find broken pivots for SR TKP per se, I did reassess the mechanics behind that undercut. SRs don’t just compress the bushings, the holders (and kingpin hole) allow the bushing to slide in the cup. That movement tilts the pivot instead of just rotating it and without the undercut it would compress against the pivot cup.

That said, I am effectively removing that slide action with the bushing holders, so the undercut is no longer needed. I’ve removed it from the design.

I haven’t seen it fail on SRs specifically but MBS, Evolve, WowGo? definitely fail there. But not having stress concentrations is definitely nice

Are you planning to offer these? Or just the dkp design? I have some sr tkp’s and I’m possibly interested in the TKP bushing seats you have displayed in that first pic.

I think I have 4 of those left still in bubble wrap. Even though I’ve never experienced it, they do have the same potential for snapping the bolts as the original SR bushing supports which is why I designed the one piece hanger/bushing support (yet to be milled). With that warning in mind, if you want a single or pair (I only run them on the rear truck) shoot me a dm and I’ll cut you a good price.

I personally love both TKP AND DKPs. For tighter radius turns, it is had to beat a properly tuned set of DKPs. I am really looking forward to seeing this project come to fruition!

One thing that really annoys me about DKPs is the overall height of the trucks and the need to go through the deck. That is not good for the deck and makes mounting them a pain.

If the overall height of the DKPs could be reduced and mounted on the bottom side of the deck, that would be amazing. With stronger materials I think this could be done.

Another thing to consider, you do not necessarily need to use full height 0.6" bushings in the design. Companies like Riptide offer shorter bushings in both 0.5" and 0,4". This may result in an overall lower height to the truck.

I completely agree, I would love to ride these on my top mount builds if they were closer in height to TKP/RKP trucks.

When I designed the new version I was able to shave off 3mm of total height. Granted, that isn’t a whole heck of a lot. If I has designing these strictly for top mount I could probably shave off another 5mm, but in a drop-through mount the secondary pivot cup would hit the board.

Using a stronger material would allow me to cut off a mm in the bushing holders, but at a substantial price increase.

Going with 0.5" bushings would shave off about 5mm total height, a full cm for 0.4". But that would require the angle of the pivots to be changed to accommodate, which would change the whole feel of the truck. I don’t know if it would be better or worse. I honestly got lucky with the first generation of DKPs and how they feel. Playing with bushing heights and pivot angles to get that same level of stability, turn, and responsiveness is not something I can afford to do (time or money). But it would be nice if I could.

Got a couple quotes back for various quantities. Looks like cost will be $342 for a pair of dkp trucks including baseplates ($171 per truck). I’ll probably approve the quote this weekend after the poll closes incase there is more interest.

sorry, hut the middle bit looks like a dick

I actually miss carving on my crappy DKP I did however get speed wobbles on them. @Razillian at what point would you start getting a discount? I’m interested, but am unsure how much testing has been done