This is the story of a board i built to test an idea.
It took far to long to finish.

1000 mile update Its been a while since i posted an update here but were well into winter now and i noticed that i have crossed the 1000 mile mark on this board. I figured 1000 miles is a good point to look at what this board has been through so far. Its also a good excuse to open the board up and take a look how things are holding up. What has happened over the last 1000 miles? Many long rides in Dorset countryside back at the family home. [IMG_20190629_111435] Rides along Bournemouth beach…

After spending a great summer riding and racing my mind was slowly drifting to “what next”. I wanted something a little different. Something light and maneuverable. Something designed for racing on tight tracks but still capable off-road.

After much riding and discussion i had concluded that if you want good grip and control on loose ground then 4WD was probably the way to go, or at least worth trying. At this time there were few 4wd boards about and they were all huge.

My idea was to build a 4WD that was a similar weight to most 2WD boards. The goal was distributing power to more contact points rather than just doubling drive power and weight.

What follows is the design process that lead to the most unique build ive done to date.
Featuring vertical mounted drives, center mounted ESC’s, custom CNC’d deck and enclosures. 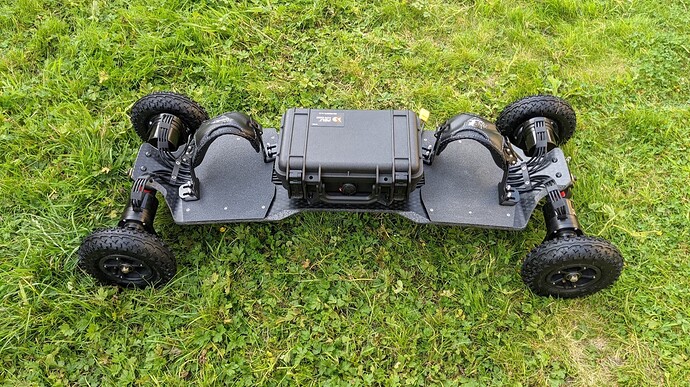 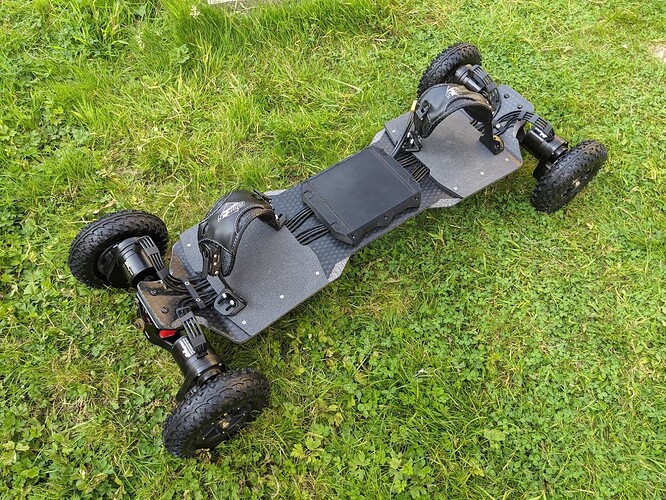 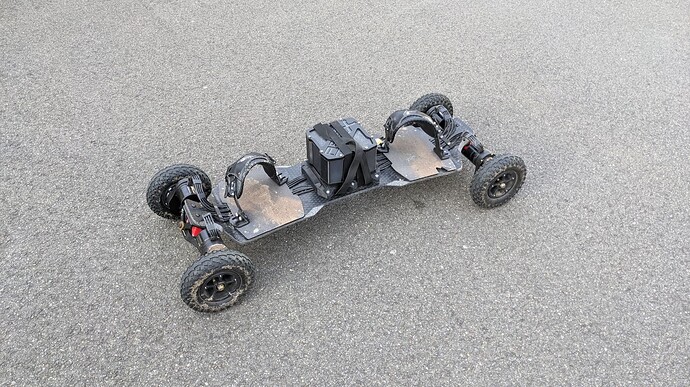 I had worked out that maytech 6355 were the most power dense (per gram) small motor that was avalable in esk8 at the time. 4 of these were just over the power output of 2 larger 63xx motors And the weight was about the same. It seemed that these might be the best option for lightweight 4wd.

There were small drives at 3:1 or huge drives at 5:1 but nothing in between. All the 3:1 drives were for street trucks. All the 5:1 drives were designed to handle huge motors and weighed 1KG+ per drive.

As i am using 4 small motors, each drive only needs to deal with half the load. This means that gear teeth can be smaller and face width reduced, resulting in smaller & lighter drives.

I decided the only way i was going to get this was if i started designing my own drives. 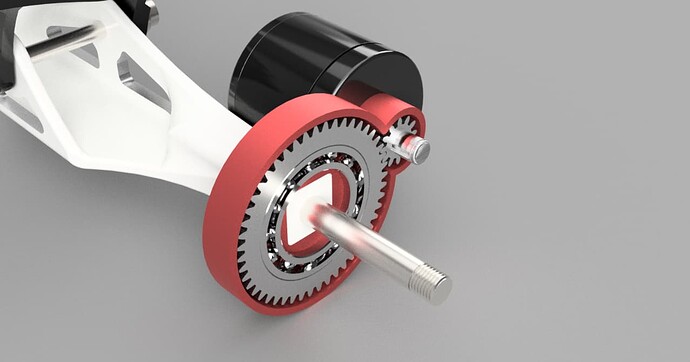 This was when the next key idea popped into my head, which started to cement the plans in my mind.

If the motors and drives are small enough, Then they would fit above the truck.

This means that all motors are better protected from impact or damage.

It also pulls more weight closer to the center of the board. This means that the weight is closer to the riders feet giving more control and also reducing rotational inertia whilst turning.

Damn these drives are super cool. I can’t wait to see more!

After deciding on gear size and ratio i ordered some glass fiber reinforced nylon gears. These are not widely used in esk8 but are used in many industrial applications. These are available off the shelf in many common sizes and are very cost effective compared to getting custom gears machined in lower quantities. 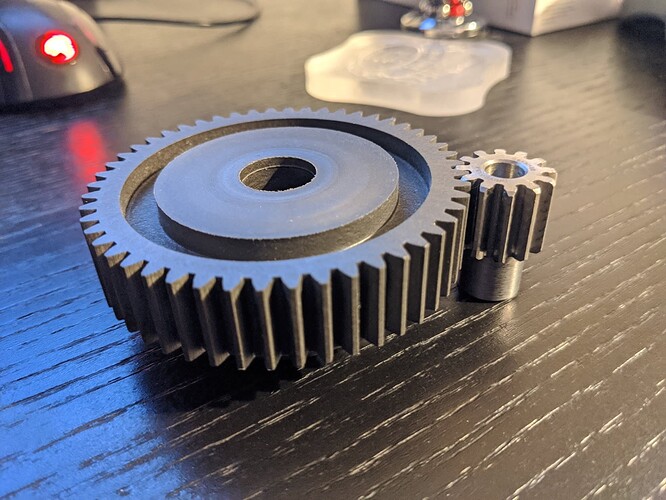 I saw some images of @3DServisas prototype MBS compatible hangers. 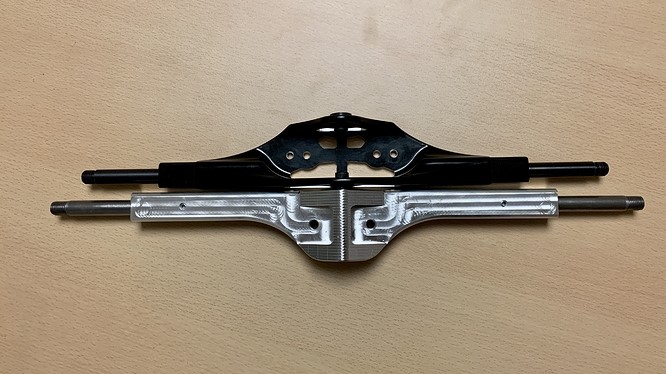 The thing which instantly drew my attention was the longer hanger. this would mean more space for motors and drives between the wheels and baseplates reducing the chance of any collisions whilst turning. 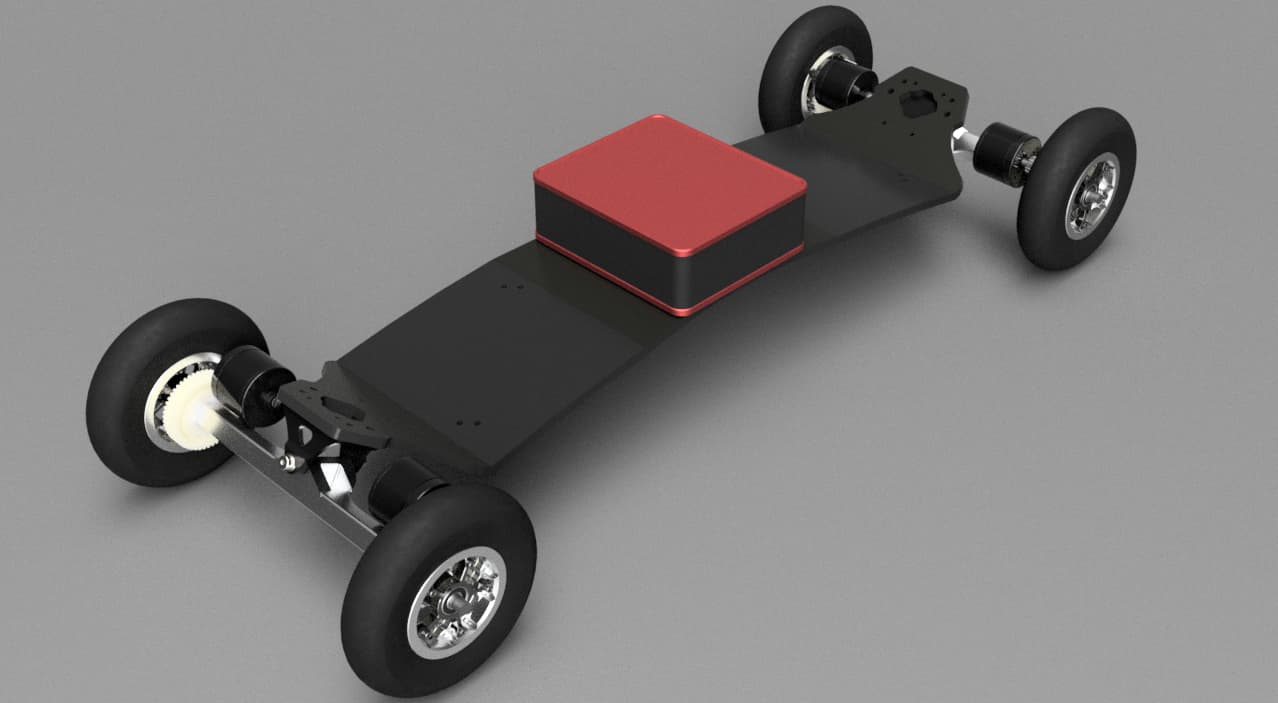 I quickly worked out dimensions for these and got them swapped out in my model. Seemed like a much better fit.

Spent quite a lot of time trying to progress the design if the gear drives.

At this point im starting to realise how much work is involved in designing a good set of gear drives. And also the headache involved in thinking about seals, tolerances, attachment, and getting the parts actually made.

Really happy with how its looking tho. Definitely feel like its heading in the right direction.

By this point i had talked myself into using the SAS-MBS trucks for the extra width, and because i had never tried the MBS shock block system.

@Lee_Wright had been bugging me to get some MBS F5 for a while.
And i knew that i wanted to use Rockstar 2 hubs as they are the lightest hub on the market. (fuck squeaky trampa hubs).

It wasn’t long before these first few parts from MBS were on my doorstep. 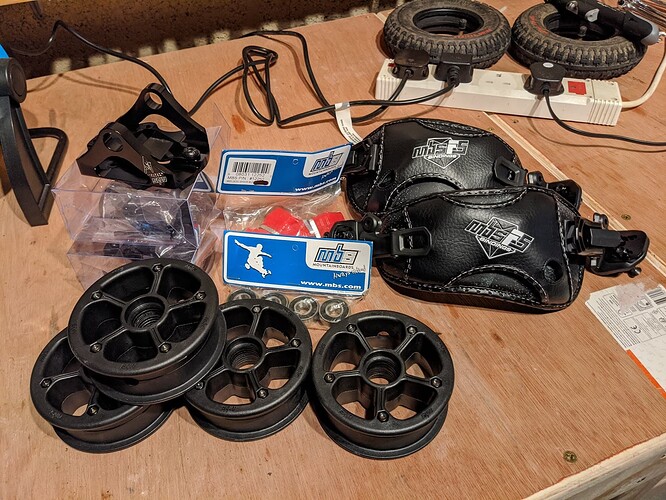 I had started to realise that having upward facing drives means that end mounted ESC cases just wont work. They would have to be mounted so high to clear the motors that they would look ridiculous.

I really wanted the option of swappable battery so that i could have a big pack for long rides or a small pack for race events. This rules out the option of ESC’s in the battery case.

The solution seems to be a low profile quad ESC case that sits below the battery. Some quick testing showed that it may be possible to get this down to less than 20mm height, which is less than the spacer below most battery boxes anyway. Even with a 90mm tall battery mounted on top, the overall height is still less than the peli 1200 which is commonly used.

This also fits nicely with the idea of keeping all weight central and balanced. 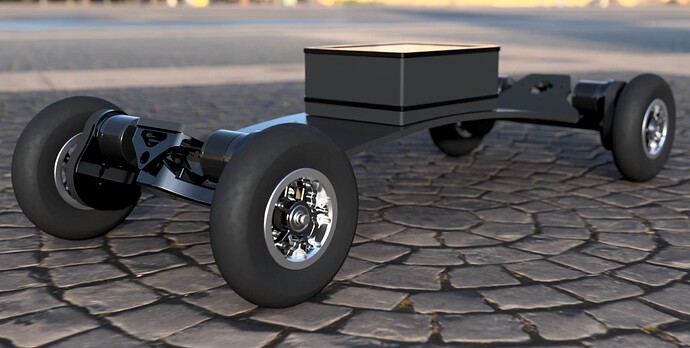 Perhaps I’m just a nerd but I’m always fascinated with the process other people take themselves through when designing something. Reading about it always gives me something to consider for the things I do, even if about a different type of device.

Thank you for taking the time to do these posts!

Some people plan it, buy everything, build it, and end up with what they wanted at the start. This build is not like that

It was always planned to be a testbed for some less conventional ideas. Solving new problems and doing things differently takes time and often the path changes as you learn new things.

Sometimes the journey is more important than the destination.

I’ve been waiting for this thread for over a year

Whilst designing this board i had been sharing my ideas and renders with a few friends. They were also keen on the idea of lighter 4WD boards.

The thing we quickly realised was that when your buying 4 of everything you start gettting some discount. If you have a bunch of friends all buying 4 of something then you very quickly start approaching bulk buying quantities for many esk8 components.

Get 4 friends and it puts you at the point where your buying 20 motors direct from supplier at a decent discount. 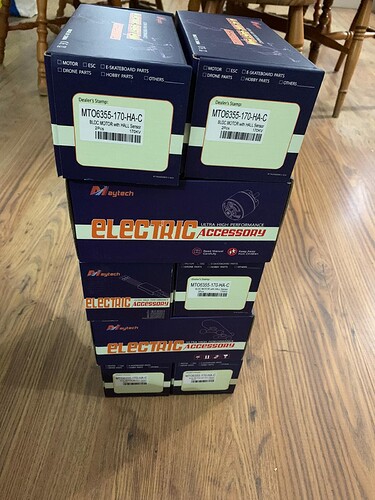 How do y’all get this many friends? Asking for a friend.

Alongside all this I had started talking to @3DServisas about getting a decent price for a few sets of the Fatboy hangers.

This lead to discussion about drives and me voicing my frustration with trying to progress my own.

At the time @3DServisas had the MiniEco drives which were great cost, size and weight but were a long way off the ratio that we wanted. After a few evenings of back and fourth with MrSAS he offered to take another look at the MiniEco and see what more could be done to increase the ratio without adding to much size or cost.

A few days later he came back with a proposition for a 4.2:1 version of the MiniEco, which also included the drive gear bearings seen in their larger drives. This met all our requirements and with our ever growing group buying power he was able to offer us a competitive price on a decent size batch.

The MiniEco V2 was born.

He quickley whipped up some prototypes and test fitted the whole assembly. 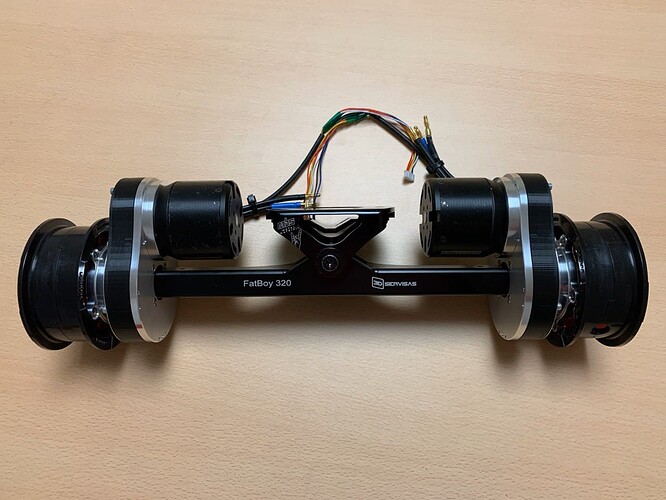 Quickly got my model switched over to the MiniEcoV2 drives and MBS hubs.

Trampa had just released the BigBoy deck which seemed to match my ideas for this board perfectly. there’s a few small geometry changes they made which i think make a huge difference over the standard deck.

Firstly, its wider. no need to add extra wings to stop your toes falling over the front edge.

Secondly, the deck is flatter. This means no more footache from the over exaggerated arch found in the old decks. 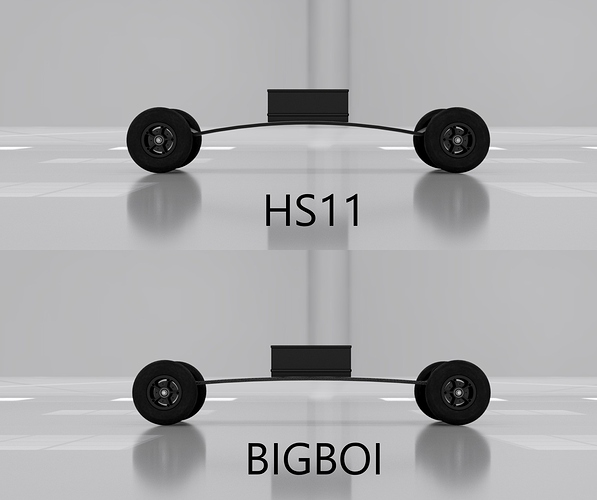 Finally, they moved the bend closer to the trucks. This seems small but its kinda important. It means that you get more flat space on the deck, allowing for a wider foot stance without increasing the wheelbase. It brings the weight of trucks and motors closer to your feet. It means there’s more space between the bindings for a bigger battery if needed. It also means you get more ground clearance near the deck tips. 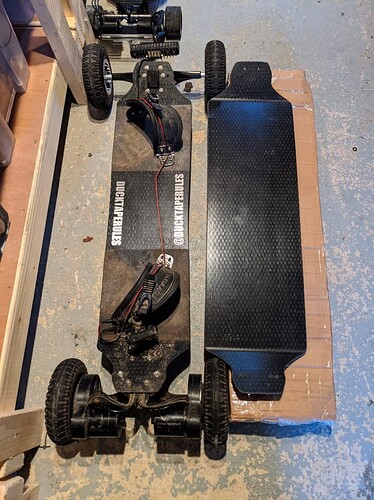 Got one straight from the first batch. Initial impressions are good. really like the shape. shame it looked like they played football with it in the warehouse before shipping it, but i guess i was only going to trash it anyways.

Looks like our gear drive parts are coming along nicely 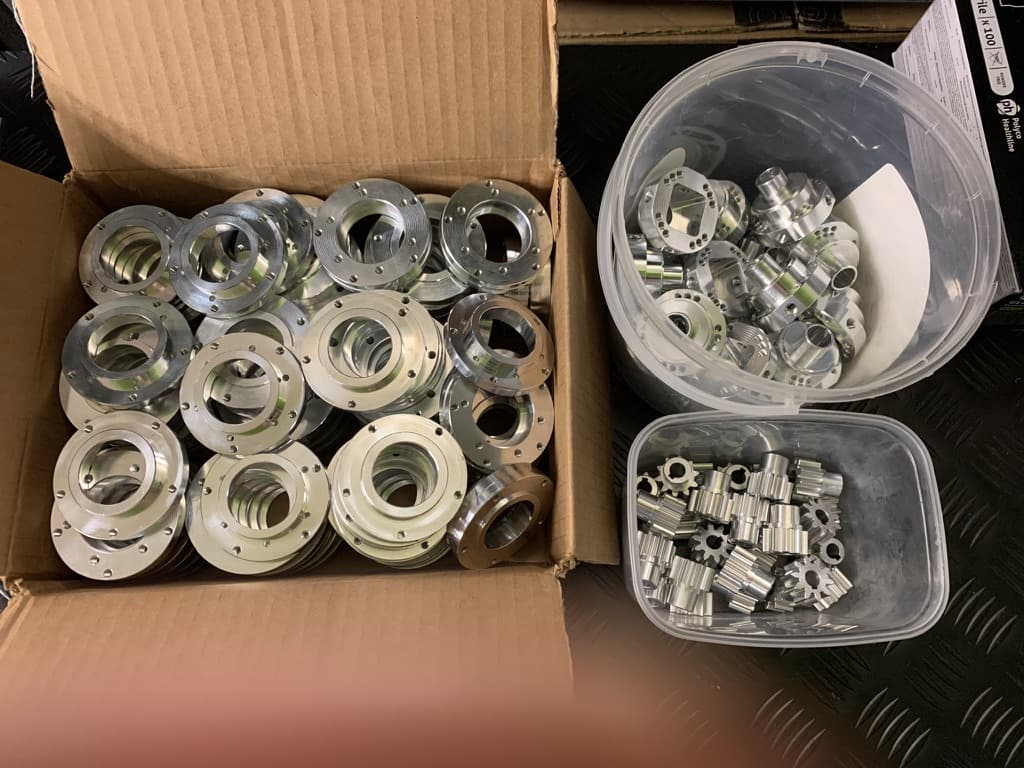 Very exciting day. The @3DServisas parts arrived for our group. A lot of design, planing and organisation finally paid off. 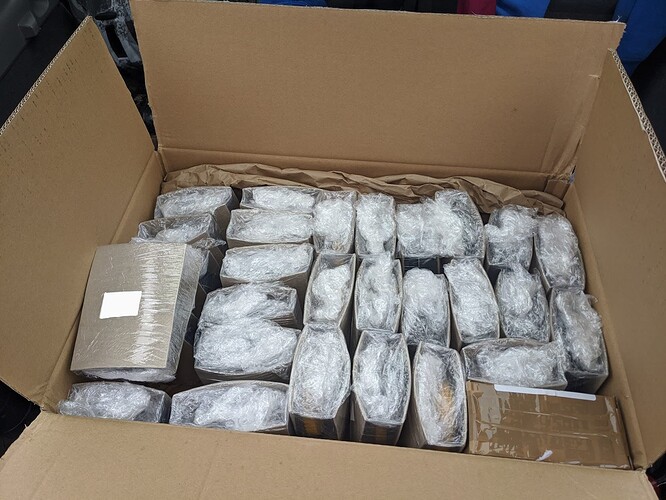 I couldn’t wait to get my parts unpacked and assembled. 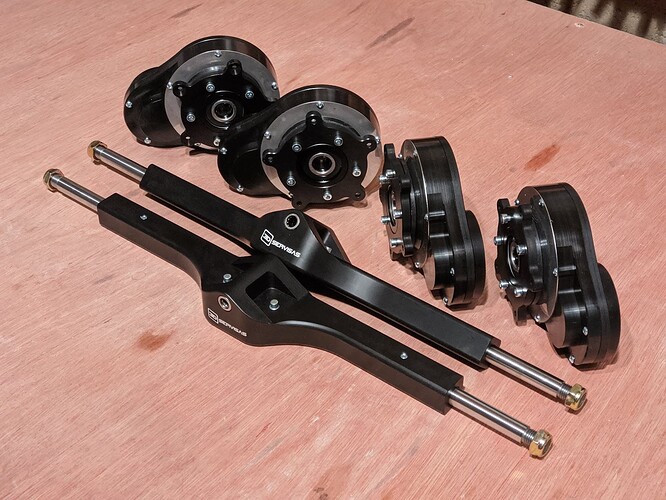 Quickly got a set of drives mounted up on a hanger, with some motors fit loosely in place. 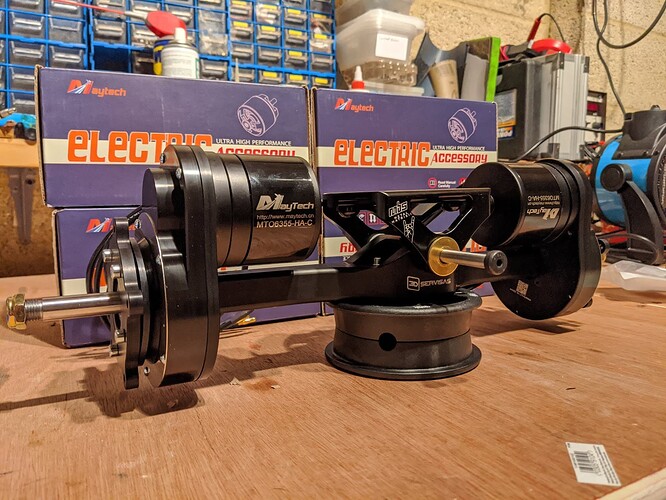 That assembly got put straight on the BigBoy. 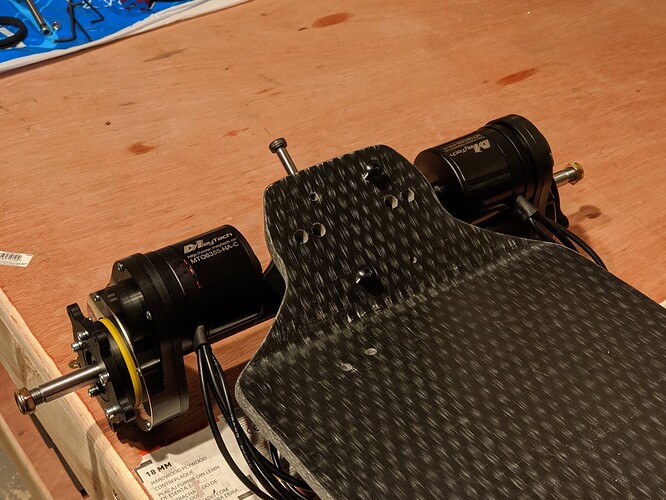 Suddenly its starting to become a reality. Its still early but im really starting to get a feel for how slick This board will look once its fully built up. 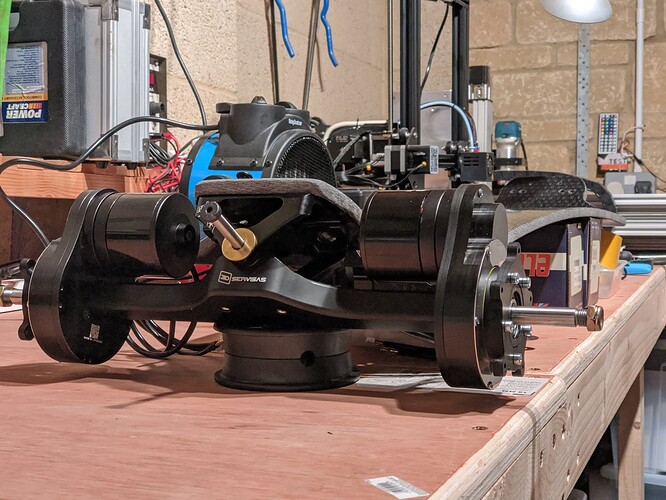 But also a reminder of how much further there is to go. Its clear that the deck is going to need modifying to avoid clashing with the motors during turning. And precision modifying a trampa deck is no simple task.

Love this thread already! I think I’ve seen this build completed in some videos before so will be cool to see the rest of the process.

Time to start thinking about how to avoid the deck touching the motors.

The plan was to cut in the deck tips to alow the motor to pass freely past the deck in heavy lean. I know the trampa composite an be difficult to work with by hand so i decided this was a job best done with the CNC. and when you have that precision avalable why not abuse it 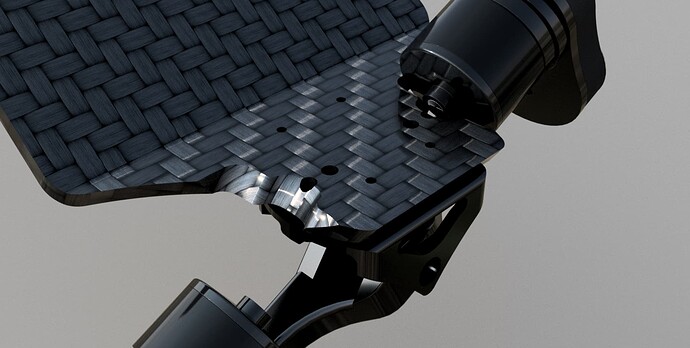 This was my first thought, a cutout that exactly matches the motor profile.

But i was not really sure about he aesthetic and decided to try something slightly simpler in geometry. 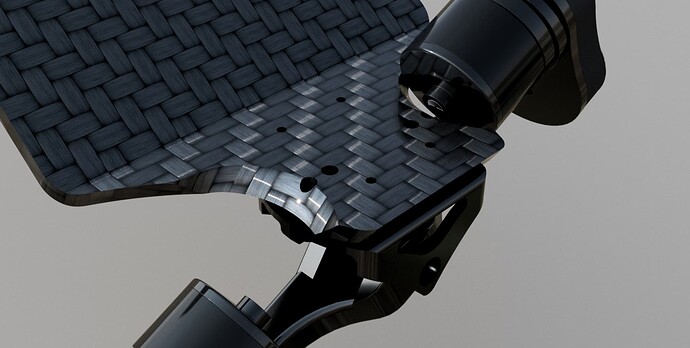 I think i prefer this but I needed to se them both in hand before making a decision.

To get a better ideal of them and check how they fit on he motor assembly i printed a test part with both geometry’s. 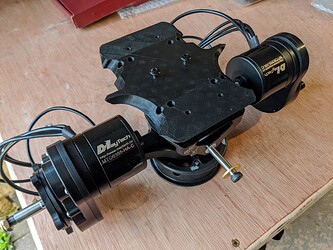 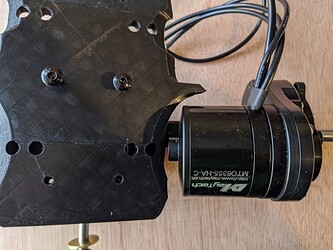 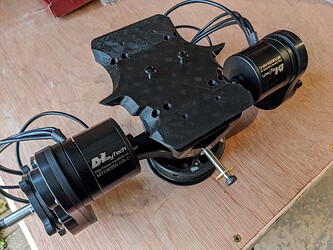 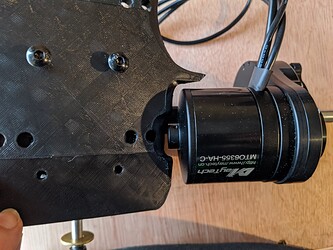 After pondering both parts for a while i finally settled on the simpler curved cut.