Greetings all - I am unsure if this is the category that I really want this review / breakdown to be in, but it seems to fit here better than in DIY Builds. This thread’s purpose is to properly contain the discussion related to these wheels, as well as provide a place for my full review (coming soon)

Recently, a thread popped up, created by John over at Stakboards @ReplyRetricted. He introduced some “new” airless wheels that I had personally not seen before. It came up that these looked very similar in design to some of the Boundmotor wheels or Flash airless wheels, but they had some differences. Regardless, I was interested and since he was offering, I requested a pair be sent to me for review.

Stakboards; I don’t know much about this company yet, nor do I recommend buying from them quite yet. However, people want links, so here’s the link: https://www.stakboard.com/

After talking for a little bit, he sent over 2x 50t pulleys and four of the new 125mm airless wheels. For reference, from the date he said he would send them to the date I actually received them was about 19 days. That’s not really too awful considering they came from China. They were packed well and there was only slight damage to one pulley.

Here’s the real thing you clicked on this thread for, pictures. 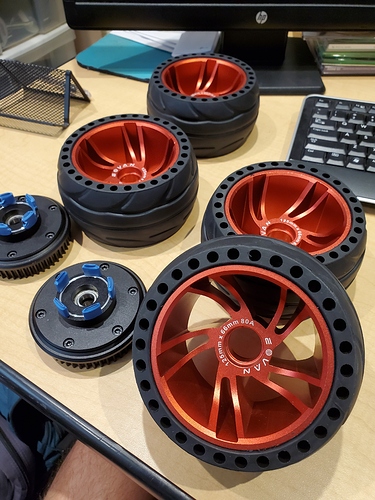 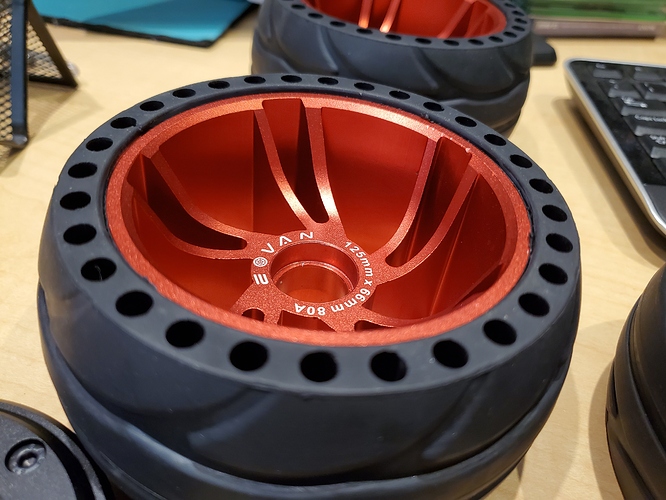 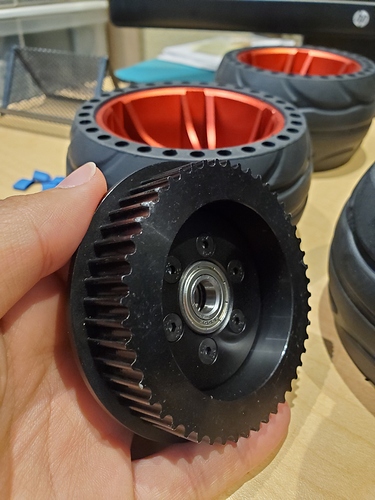 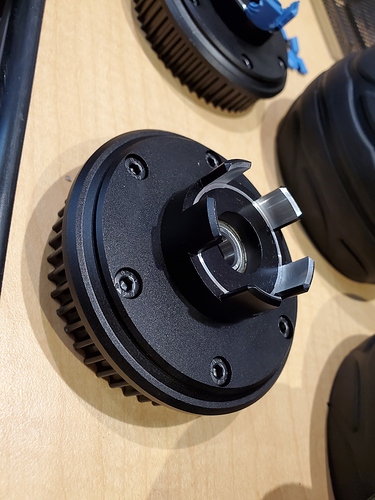 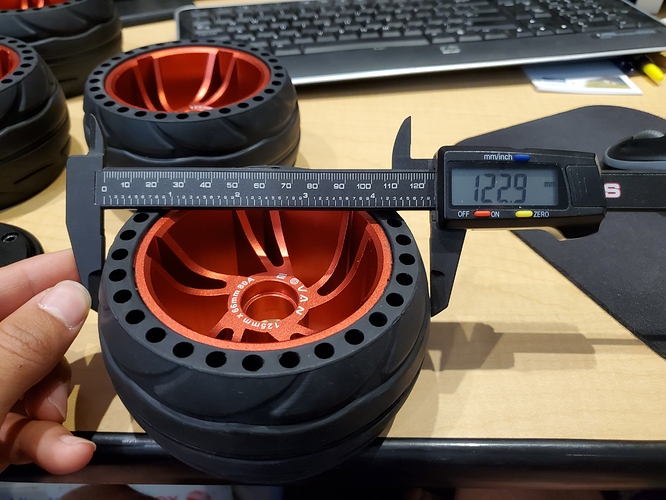 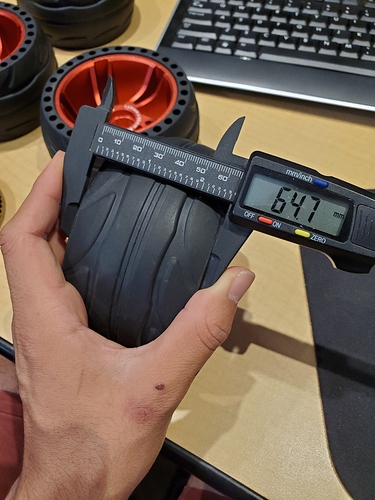 I’ll share some more pictures as we go here, but my first impressions of these are WOW. Personally, I love how they look. The spoke style looks really slick, the offset core position looks really awesome, and the tires (I guess we can call them that) look great as well. Say what you want, but my personal preference is that I think these are my favorite looking wheels. For reference, the TB110 wheels have almost the same width.

Here’s our first problem child. At first glance, these look great. They appear to be aluminum, anodized black. They are quite heavy, and are assembled using twelve bolts. The six small bolts near the bearing are grade 10.9 metric bolts, and they go through the pulley and connect the adapter onto the pulley. The six larger bolts are all grade 12.9. These were torqued very tight and were a bit scary to pull off.

You might ask why I had to take apart the pulleys, why would I do that when they look so great? Well. Apparently the @ReplyRetricted pulleys come with 9.7mm ID bearings. No idea why (this is approx 3/8 equivalent) but I cannot use them on my 8mm BN hanger axles. I intended to take apart the pulleys and see if I could yank out the bearings and put in the right size ones. While the bearings are 9.7mm ID, the OD is the standard 22mm. 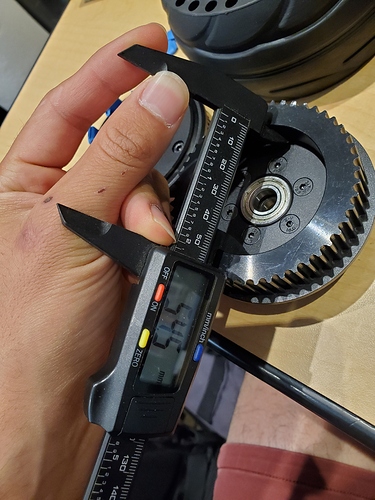 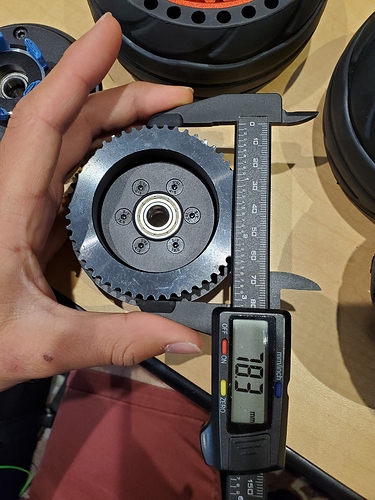 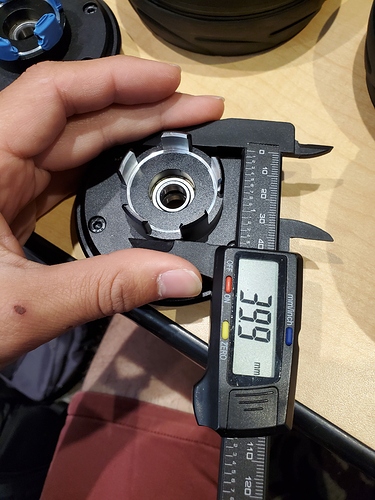 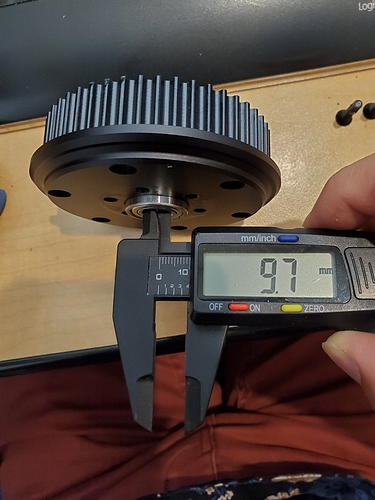 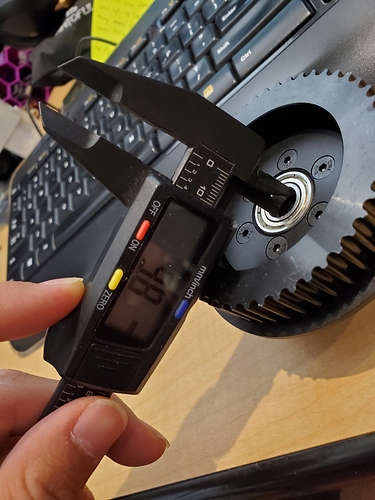 After taking all of the screws out of the pulley, I was able to separate the adapter from the pulley body, but even after taking out the other screws that presumably hold the flange / pulley teeth together, the other parts wouldn’t budge. Additionally, I tried pretty hard to pull out the bearings but I think the only possible way to get them out is with a press, which I do not have at this time. I would love to use these pulleys because I think the design is pretty good, but I can’t right now.

One other note on the pulleys, on the inner side with the bearing, there is no issue, but it appears there is no spacer of any sort between the two bearings. While this would cause a lot of concern normally, since the pulley is full metal, it’s not as worrying, but I would be slightly concerned about torquing down the wheel nuts too hard for fear of ruining the bearings.

On the side with the wheel, there is a sizable gap between the outer bearing and the place where the first wheel bearing would be. This is definitely concerning as well because as you torque down the wheel nut, it’s difficult to see where the stress would travel.

Another important thing to point out with the pulleys is that they only fit into certain wheels. In a set of wheels, the spoke direction varies, two go one direction, and two go the other direction. Due to this, the pulleys will only fit onto two of them. The fitment of the pulleys is pretty tight, but leaving the heat shrink tubing on the fingers wouldn’t be the worst idea because it would reduce any rattling. 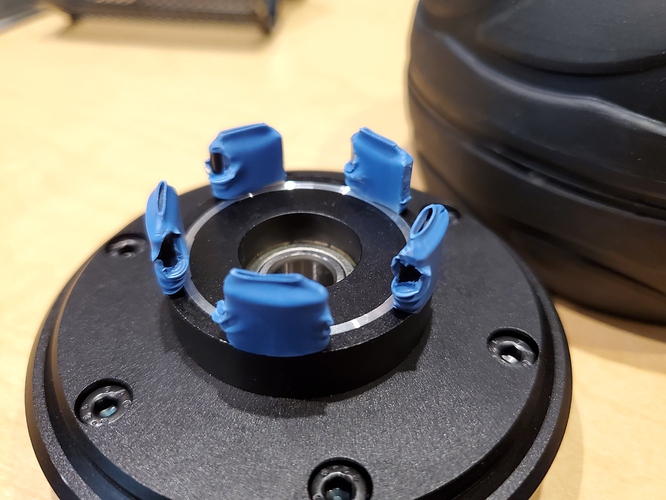 The heatshrink does get quite messed up because of the tight fit, so you’d want to take it off before test fitting in the wheels and then plan on pushing it on the final time

I do quite like these wheels before riding them. However, I am slightly worried about how the rubber sleeve attaches to the actual wheel. It seems like I can peel back the rubber a little bit if I give it some force. I don’t know if that would even be noticeable while riding, but I suppose if you corner really hard it could be a bit odd. I can pull it back further with two fingers 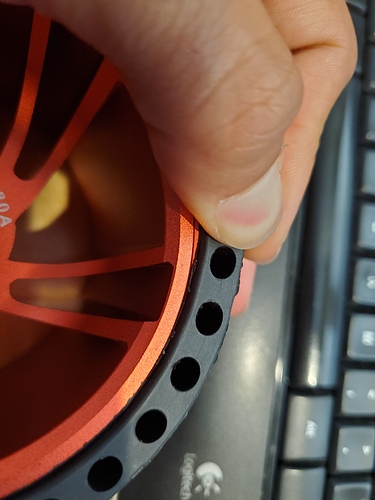 One of the other things I noticed was that the little holes around the outside don’t actually go that deep. They only go about 13.7mm deep. I’m sure that is by design but you can’t tell from just pictures. 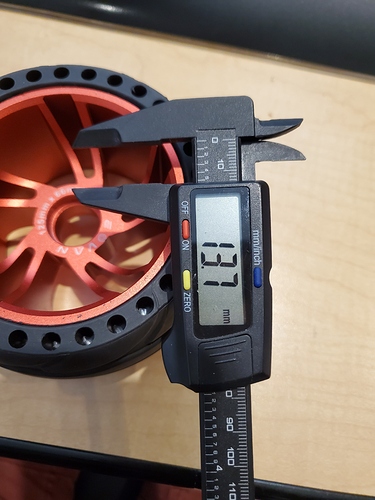 The other thing to note about these wheels is that they are quite weighty. 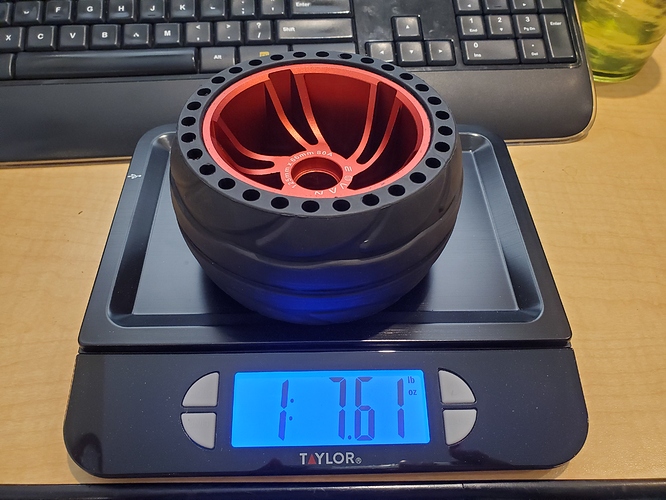 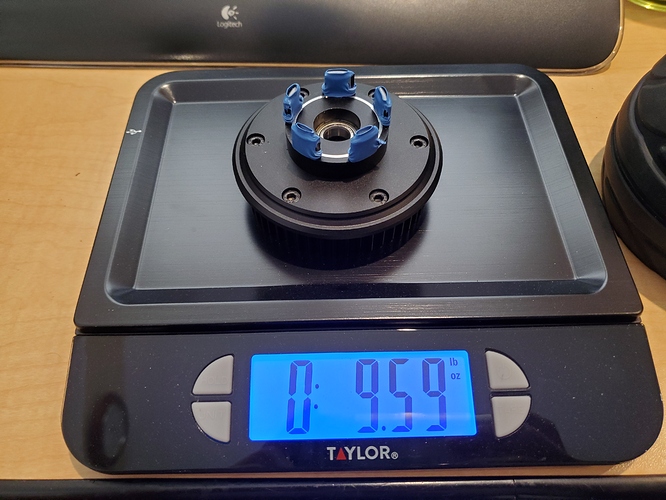 Each of the wheels comes in at ~1.5 lbs, then another just over half lb each for the pulleys.

Overall these wheels are pretty dope. I’m waiting on a reply from John to see if he can fix my pulley issue. In the meantime, anyone have ideas? Any comments? Any questions?

interested in your report and findings riding the wheels…
especially after a 100 or so Kms… in my experience, (albeit not with these exact wheels) on ali hubs is NOT good… when the wheels had a more or less compliant normalish esk8 non-metallic hub… and the rubber was worn in and the contact patch increased was impressive…

but call me jaded,

I am hoping for the best with these but hey, that’s why I’m testing. I’ll report everything here in full. If there are specific tests people want me to do I can do that as well

wear the fukkers out, see how they ride as they wear
range vs pnenmies vs 'thane
comfort
price vs lifespan vs ride quality
go have fun and wear those fukkers out

That’s the goal. Just gotta have the right size pulley bearings first. If there’s anyone that has an idea on how to get these out and change them, I can ride these sooner.

Nice job! I’m looking forward to seeing your opinion on how these ride! They look interesting to me but I just passed them off as cheap wheels.

I mean going by the price alone they aren’t cheap. The hubs of the wheels are CNC’d aluminum and are quite substantial. I’m mostly concerned about range cuts and how well they will actually absorb road vibrations

Oh I never lookee at the price, I just saw pictures of them. I couldn’t tell if the red part was plastic or not.

Yeah it’s CNC’d aluminum, if you look close under the annodize on the spokes you can see the machine marks. Hard to tell in their web pics tho

If it was a plastic hub. I’d have already worn 5 wheel sets out

I still have hopes, but I doubt it… I’ve since moved on to the momentum d00ds wheels… not rubber… but if he can get 'thane produced maybe he can get rubber tires…

I’ve since moved on to the momentum d00ds wheels

Those are on order for me too, excited to try those too but it’s probably a late november thing at this point

I’d like him, but I expect he’s just a shill like @kenna was, to come on here and we could tell him… put your best rubber on a kegal skate hub, make the price not ridiculous and he’d make bank…

problem is… they are their own problem…

Nice review ! I mostly concerned about the range, they remind me of the onsra 115mm that killed my range by 50 - 60% compared with 97’s. I wonder if that’s the case here.

Thank you! Not complete yet though. Yeah that’s the stat I’m most intersted in too, after durabillity and ride comfort. I’ll do a wh/mile comparison directly against my TB110’s and see what it stacks up to. Since the holes don’t go all the way through, I’d expect these to use maybe 15-20% more than the straight urethane.

Are you referring to the new ‘two part’ wheels that are shock absorbing? I just saw them for the first time a hour back. Where did you order them from?

Have you had a chance to range test these yet? It’d be great to hear your feedback on range. I’m keen to find another solution that’s better than AT wheels

Yep! I’m referring to the @TheGoodMomentum wheels. I got in the first pre order on the site

Have you had a chance to range test these yet

After disappointingly finding out that they take up the entire axle length on a BN truck, leaving no room for the nut, I had to buy longer shoulder bolts from McMasterCarr. Following, one of them got very stuck in one of my hangers. Thankfully, my friend was able to pull it out, and now I put one of the fixed axles back in. I will be purchasing a single new BN hanger from Kevin very soon, but I just haven’t had money in the Esk8 budget this month.

Never fear, I always deliver on my promises, there will indeed be a full review with numbers and all the details and answers to questions, it has just been slightly postponed. In the mean time, I am riding Bergs pnummie wheels so I’m gathering data on their numbers and performance so I can have a better comparison.

They look very nice, but in terms of riding comfort I think this is the version to go with. 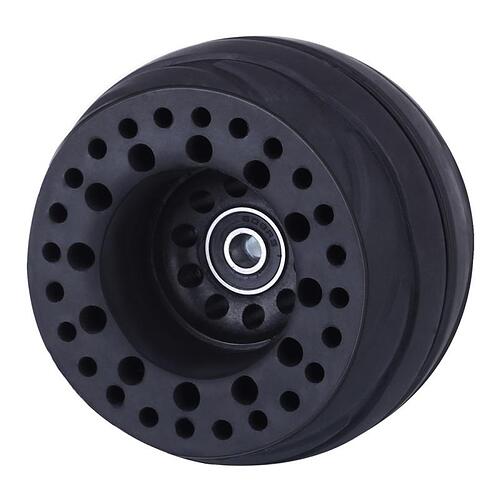 Lookingforward to seeing what you think about the EOVAN wheels!