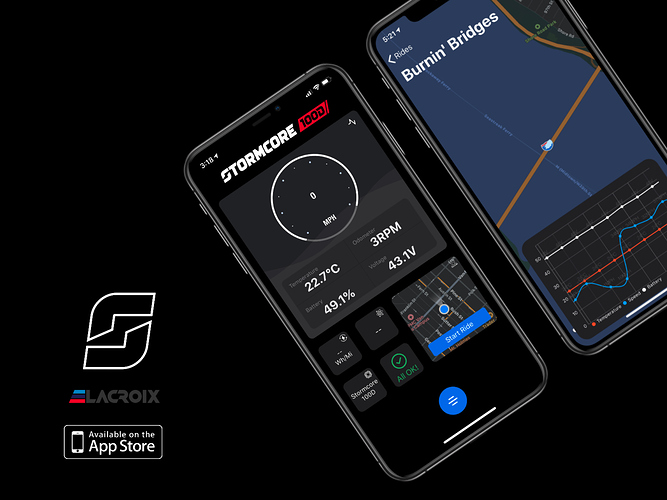 Starting this thread to avoid spamming the announcement thread.

WARNING: DO NOT ATTEMPT TO UPDATE YOUR FIRMWARE IF YOU HAVEN’T DONE IT BEFORE OR IF YOU DON’T KNOW WHAT YOU’RE DOING

You need VESC FW5 or later. The firmware is in early beta right now. Grab it for Unity and Stormcore here: https://vesc-project.com/node/1640

FW5 works for dual controllers like Stormcore via emulated canbus. If you’re not familiar with how it works, hold tight I’ll write a tutorial.

Currently, the app works with the following:

If you download the app, please provide feedback and/or bug reports in the app or in this thread. To do so from the app, simply screenshot and a menu in the app will popup to send feedback on your screenshot. Any bugs, ideas, anything. Please tell us. Note this iOS app is for the average rider. You might want a lot more details and that will be available in the “Expert Mode” switch in settings. More detail will be added as the beta progresses.

Did you lock your phone while the app is running and your esc is connected?

You didn’t get a notification saying your esc was disconnected at any point did you?

make sure your location permissions is set to always.

Thanks, I’ll investigate this!

…and I’ll double-check again in about two hours.

Is this a bug? Haven’t actually updated yet.

Yeah, I’m waiting for actual odometer implementation before that will be accurate. It should look like this

Not sure if this is the right thread but please look into adding metr support! @rpasichnyk

The latest update I have for the Unity is 23.46. Is there a way to get a newer version or will this version be sufficient? I have multiple Unity devices and drives here which I could use for testing.

That’s great to have the code bases come together.

Confirmed again this morning it definitely doesn’t log quite a couple of metrics when locked. Pretty much only Voltage and ESC Temp, and yes I confirmed Location sharing for the app is set to Always.

Thanks for checking, I’ll investigate this further. Definitely not happening on my end. Can you do me a favor, next time you finish logging and the issue occurs, don’t close the app, but take a screenshot of any view in the app and send me a report from there. I can get a better idea of what’s going on that way.

No worries, I’ll do it this arvo when I return.

Had to send feedback via TestFlight, in-app feedback didn’t work.

Some of my best buds are heathens.

This is happening to me too. Along with telemetry not being recorded unless I have the app open. I have the app set to background refresh and such. Some of my ride didn’t get recorded at all. I did a whole loop.

Also so I don’t feel like I’m having a stroke, the configuration tab is not fully set up yeah?

Also so I don’t feel like I’m having a stroke, the configuration tab is not fully set up yeah?

Some of the pages are blank on my end. Also, my ODO is displaying ERPM when I’ve already set it up to km.