I’ve been been working on a hot-rod. Low, wide and fast… really fast. Here’s what I’ve got going on. 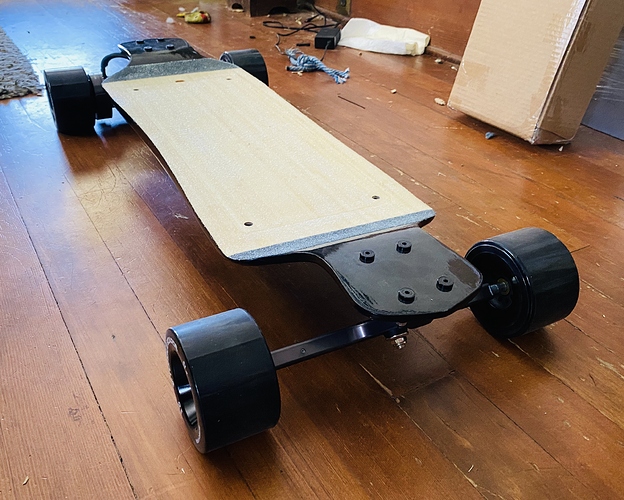 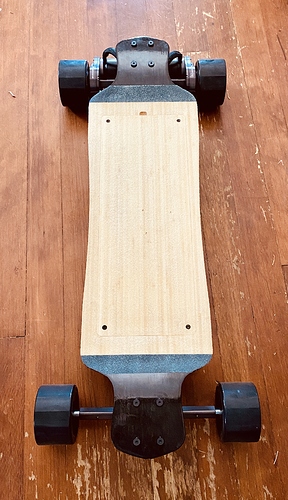 I designed a 37.5" deck with a 1 1/4" drop. It’s similar to my 42" boat the “Pale-horse”, just shorter and the styling is a little different. I used black stain on this one, not black paint so that I can still see the grain of the bamboo. Under the fiberglass lay-up it looks beautiful and is well protected from scratches and gouges. I went with clear grip because I liked the contrast of the natural bamboo with the black stain. There is some glow grip speckled in because I’m a dork.

For more info on how I make my decks check out this thread https://forum.esk8.news/t/gulveig-35-at-integrated-deck-custom-feather-remote-12s4p-stormcore-60d-maytech-6374/35237. Also, you can purchase them at my website tomiboiesk8.com. 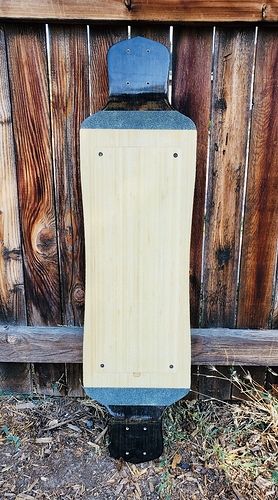 The drive system is 3D Servisas Fatboy SS Mini with helical gears (1:2.4) and 260 mm hangers. I went with the largest motors that the gear-drives and hangers could accommodate, 6384. These ones are Flipsky 6384 190kv. With the 1:2.4 gearing, this thing should be able to go really fast. As a suggestion, if you order gear-drives form 3Ds, ask for them to be assembled with the drives positioned properly for your build if possible. Red thread-lock is used, which isn’t meant to be unfastened like the blue stuff is. It is extreeeeeeeeemely difficult to adjust the position of the drives.

To power the board @ZachTetra is putting together a 13s2p p42a battery pack. His batteries look dope. Super clean work. I can’t wait to try one out with this board and a few other builds that I have coming up. To make up for the 8.4 Ah capacity I’m using an 8A charger so that I can juice it up really quick. A Daly 13s 80A BMS is going to be used. I really like that BMS because of the Red anodized aluminum heat sink… which just so happens to match the red anodized aluminum on the 100A Stormcore 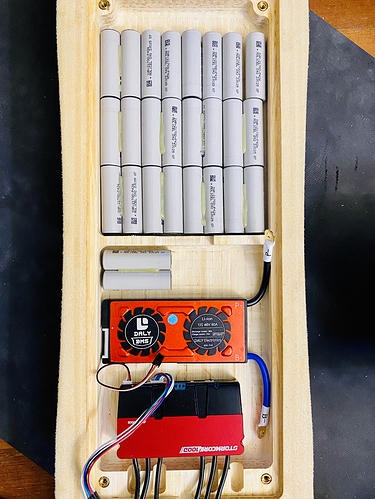 I’m excited about these Stormcore ESCs. They’ve got a lot of nice features. I’ve been running a 60A on another build and it works really nice. I hope Lacroix adds to the Stormcore line-up. A smaller, less expensive one would be great for lower power builds. The power button is one of my favorite things. Every ESC needs rave-lighting built into the button. The lights change according to battery level. Also, the button they chose is a tap-button instead of a locking push-button. Locking push-buttons seem to have a short life, so I’m interested to see how this one works out.

For Urethane I’m using cushy 72a 110mm TB wheels. I got the black ones. They look perfect on this build. The baseplates are Caliber II 45 degree, and I went with riptide bushings. I bought a few different shapes to play with, but they are all the Krank 87a and 96a formulations. I’m going to try 87a Chubbies, board-side, with 87a cones, street-side, first.

Hoyt has really gone wild with the puck. I hadn’t tried it until recently, and though I have my gripes, I mostly like it. A fatter thumbwheel with a bump on it would be nice and an oval remote shape would be more ergonomic, but then they couldn’t call it the “Puck”. Regardless, I’m having some fun with it. It’s solid and works well. Also, they have all of the colors and three different spring tensions, which is really nice for the DIYer. Lastly they sell the guts so you can make your own enclosure. So I am. I’m going to switch out the battery and remove the plastic housing to make it quite a bit thinner. Also, I’m going to use some really nice West-African Ebony hardwood to make the enclosure. This stuff is beautiful, exotic and rare. If it were any harder, it would be petrified. And it is jet-black all of the way though. I hope that I don’t accidentally fuck it up 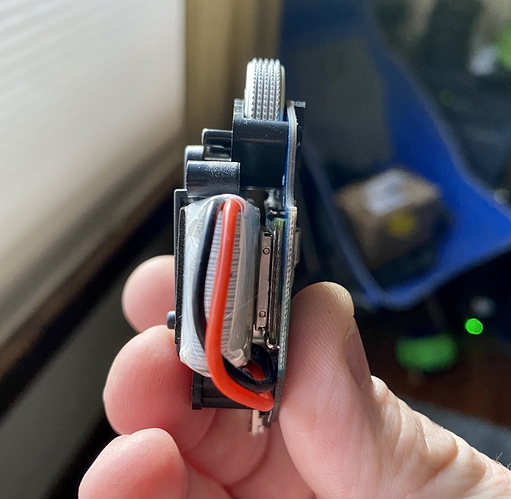 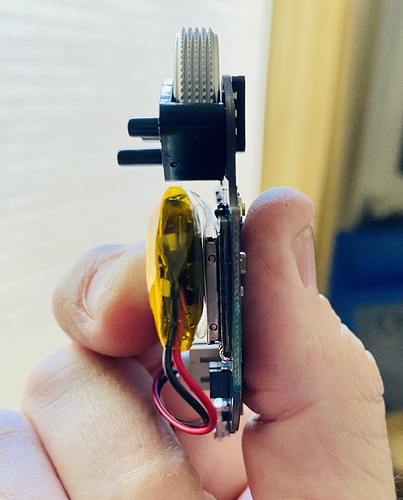 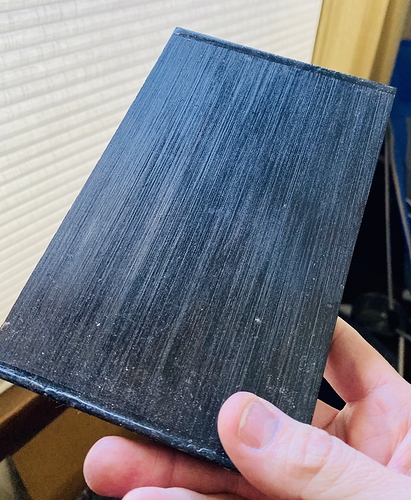 Now, the puck doesn’t have a little screen with all kinds of info on it, but I’ll survive. Honestly, I mostly only use the screen for battery-info, and the Stormcore button has me covered there. Also, the built-in Bluetooth on the Stormcore easily connects to Xmatic and the VESC app. So I’ve got telemetry covered.

That’s it for now. Once I get the battery back, I’m going to wrap this up and get some riding in. Until then, keep it real

I HIGHLY recommend the Bruce Puck. Also, great work on the build man! Pretty jealous of that deck tbh 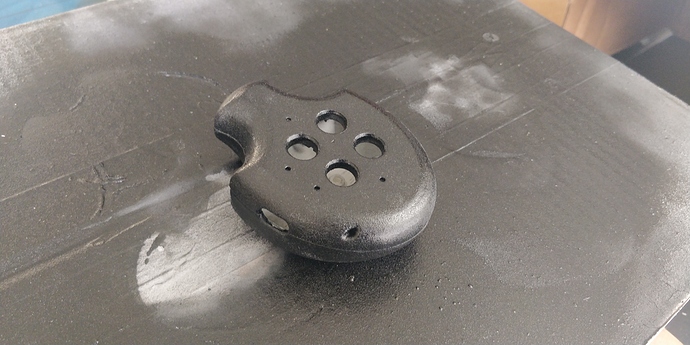 Nice work on the board, I’m an admirer of your custom work.

Please edit this wiki with your 3d Models This is a community editable wiki of 3d models for electric skateboarding. This includes but is not limited to 3d printables and CNC files. The intent is to have a reference of useful models for the community to use when building esk8. Only the links and descriptions will be housed here. Please do not discuss the models in this thread. Discussions on 3d models can be found here: 3D printables for esk8 Requests for 3d models can be found here: 3D fil… 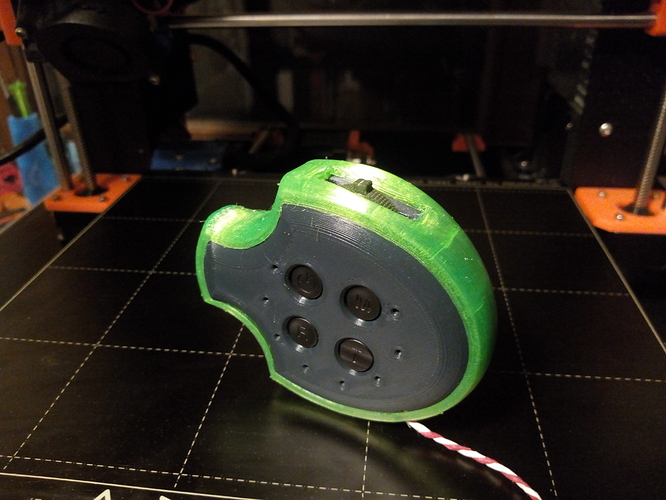 And as @Jujo said, I recommend swapping the Puck shell for this one you can download here 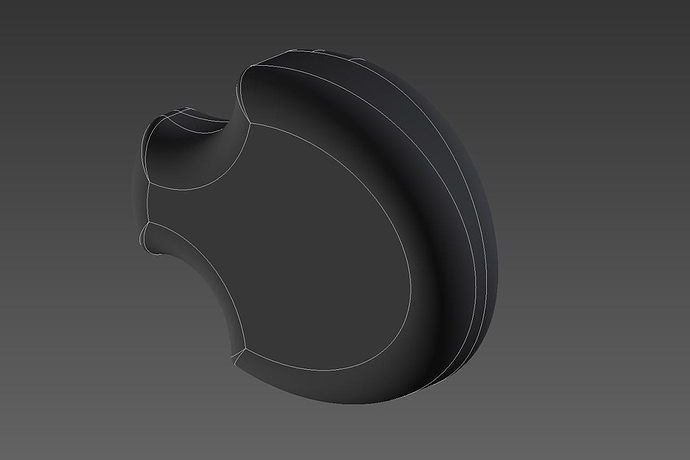 Let’s play a game! Print this object to continue. Most recent test-print/dummy model found here: (You will want to flip the model 180 to print) Something that looks like a Bruce, but is not? This is a Rev 2 pass on a rough primitive...

Thank you and thank you. I’ll definitely check out the mods.

Nice board, I love you stuff

Amazing result. That board spreads awesomeness from each side

Love the short drop down deck.

I lay out the broad-strokes of the process in the thread for the short AT deck that I made. There are certainly a lot of tricks involved with milling things that aren’t flat. If you have access to a CNC and would like to try making a deck like this, message me and I’ll give you the low down.

Has anyone tried printed the thumbwheel with flexible TPU filliment?

I need to print up some full-guards for my gera-drives. I had to put them in the lowest position to accommodate the motors. They’re hanging low and they are so damn pretty. I don’t want to scratch them up.

Not that I’m aware of, though I could see it working printing with 100% infill. However, I would feel more comfortable with a solid thumb wheel, just my gut feel on that one.

Regarding motor mount guards, I just printed some after realizing how often I rest the board on them. Now I don’t have to worry about scratching them. 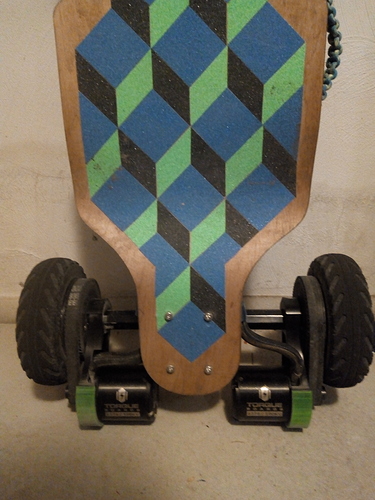 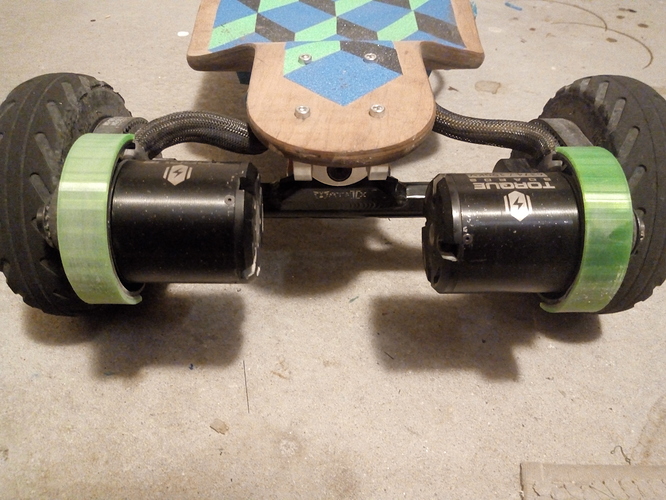 I’m going to try the flexible filiment for science.

I bet you could do it with either a high shell count or high infill, the TPU I have is pretty hard if it’s fully solid

This build is sexy. Better not leave me alone with it.

I printed a thumbwheel with a bump for my puck and it is a definite game changer. This one was printed with flexible filament and a 30% fill. It’s a touch more comfortable, but the most noticeable improvement is with regards to grip. It’s definitely grippier. I tried it with 20% fill and the thumbwheel was too flimsy. 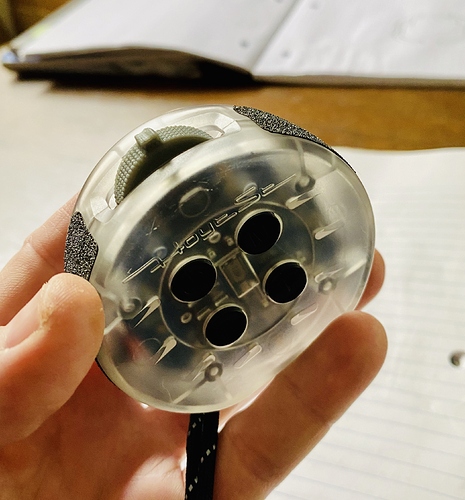 I’m starting the CNC milled enclosure. By removing the battery housing and replacing the battery with a 600 mah lipo, I should be able to make the puck 1/3" thinner. I’m also going to make scallops in the perimeter to fit the meat of my palm and fingers. Something similar to the shitty drawing below. 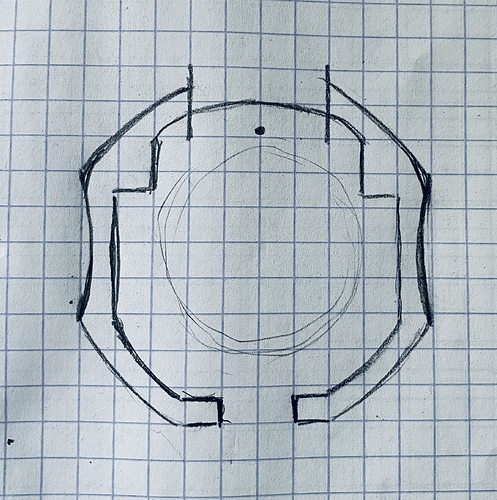 Hopefully, I’ll have a battery by the end of the week and Sizzle-pants will be rolling. I’d like to get some riding in on this one before winter comes

All the welding is done, just a couple soldered series connections and the balance leads before it gets sent off!

The 3s2p tubes will all get shrink wrapped then glued together, balance leads will be attached to the nickel at the fold once everything is secure

Looks waaaaaaay better than my battery-making hack-work. I’ve been thinking about trying out an interchangeable pack for this one at some point. It would be nice for longer rides. The ID decks have easier compartment access. I’d like to try to take advantage of that.

If it wasn’t for that 13th group it would be a easy block to swap in and out, but I can still do a bullet connection going into the BMS so you can pop the cells out and leave the BMS behind

That would be perfect.

You got it my dude, what about the 13th group? Do you want the wires to be permanent relative to the rest of the cells?

I think that should work out fine.