Ok, I’m starting to get the next build together. I made myself a really fun get around deck already, but now it’s time for a higher power board that can conquer just about anything in the urban environment, as well as shorter trail-rides. I would also like it to be highly water-resistant for winter use. Here’s the run-down: 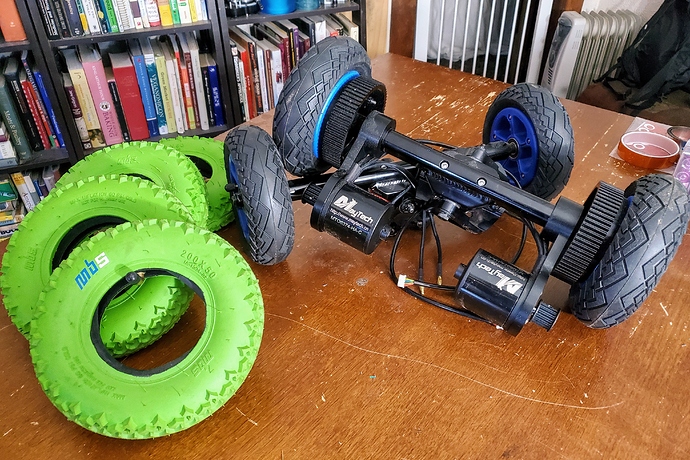 I had some Matrix II trucks with MBS wheels and hubs that I wanted to do something with, but I hadn’t figured out what drive system to roll with. I’ve been looking intently at gear-drives, but haven’t nailed anything down yet. Come winter, I would like to find a nice set to help protect from snow and ice. In the meantime, I found some solid looking belt-drive, motor-mounts at electricboardsolutions.com and decided to give 'em a try. Their set-up fits snugly on the truck hanger and is clamped in place with four screws. It looks rock-solid. The 68 tooth wheel pully is aluminum. The 15 tooth motor pully is steel. They work with 15mm belts. 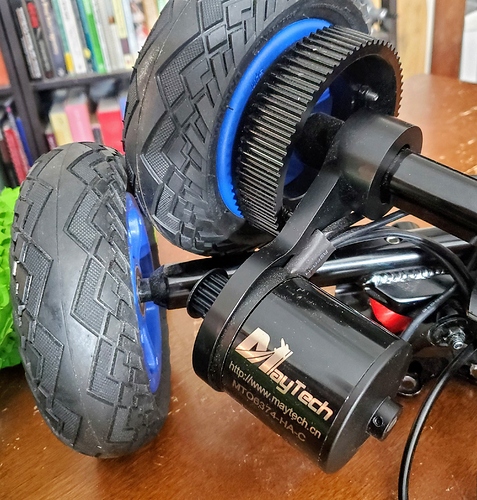 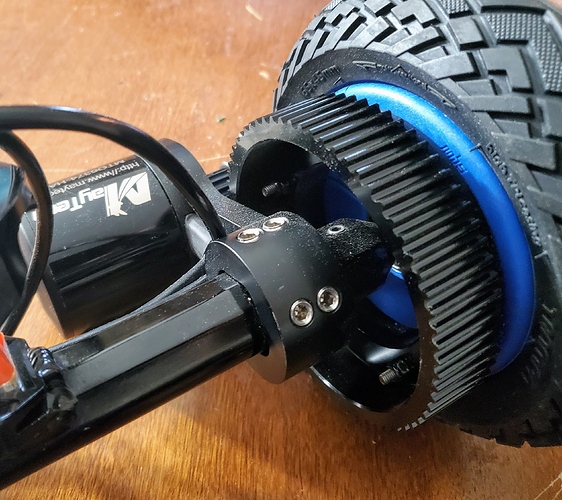 After doing some research, it seemed like I couldn’t really go wrong with the 6374 Maytech motors. I’m excited to see how they perform. I went with the sealed 190 kv version.

For tires I have two very different sets. I got some 6.5" trampa Urban Treads that will get me lower to the ground. I know I’ll be riding those a lot, but I also have some 8" MBS off-road wheels for hitting the dirt.

My intention is to make a 12s4p battery for this build. If that doesn’t work out, I’ll go 12s3p but I think I can make it happen. The ESCs and BMS are going to go in a heatsink-box mounted on top of the tail, so I think that I’ll have the room that I need inside the compartment.

The efest cells that I am using for this battery are rated for 20A and 3500 mah. Research on the cells showed that 10-15A was a more reasonable burst rating. I’d like to be able to hit 40-60A, so the cells should fit the job well. A 14 Ah capacity will work for the type of road-riding that I’ll be doing. It might not be enough for deep back-country excursions, but I’ll still be able to have some fun on double-track trails in the foothills here in Colorado. 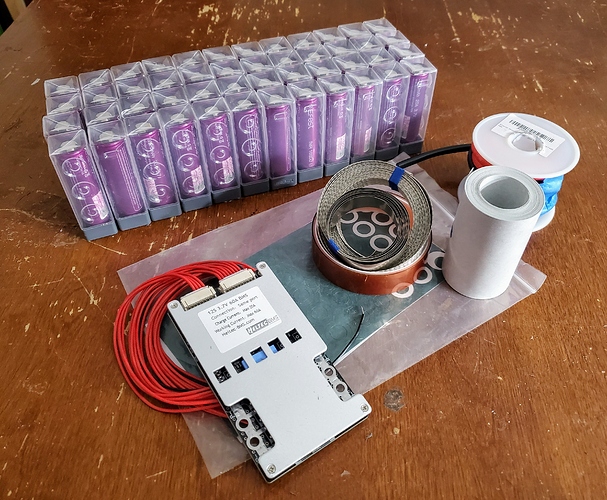 I have a 12s Haltech BMS rated for 60A. This one seemed widely used and well reviewed. It’s also pretty low-profile (10mm). The battery design and build will be laid out later in the thread, but for the basic materials, I’m going to use 15mm x 0.15mm nickle strip, 12mm braided copper and 8awg wire to bring it all together.

I’m using two generic ESCs based on VESC 6 hardware by Mr. Vedder. They have simular performance to the VESC 6 offered by ebmaker.com. Also, they are fairly compact and include a heatsink enclosure. I’ve run these with 13s systems. Using two of them will most likely be plenty of ESC for the project. They’ll be mounted inside of an aluminum, heat-sink box on the tail of the board with the BMS. This should give them the best opportunity to stay cool. I have two box sizes. I’d like to cram everything into the smaller of the two, but if I can’t, the larger one is still pretty compact. It would also have enough space for another twelve 18650 cells, if I wanted to go up to 12s5p in the bigger box. 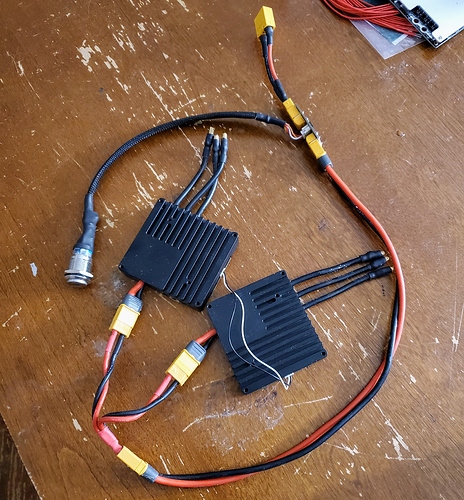 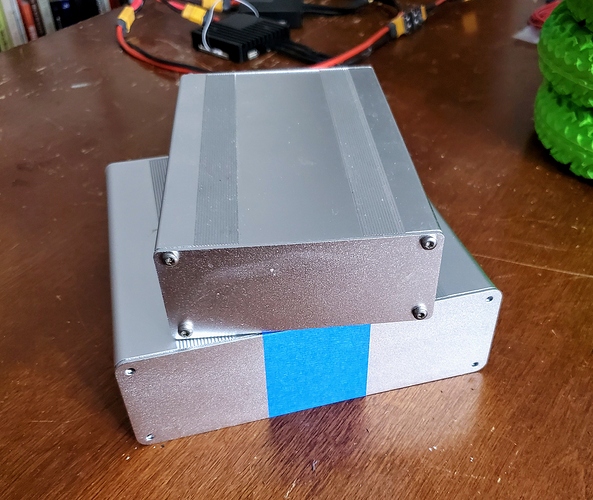 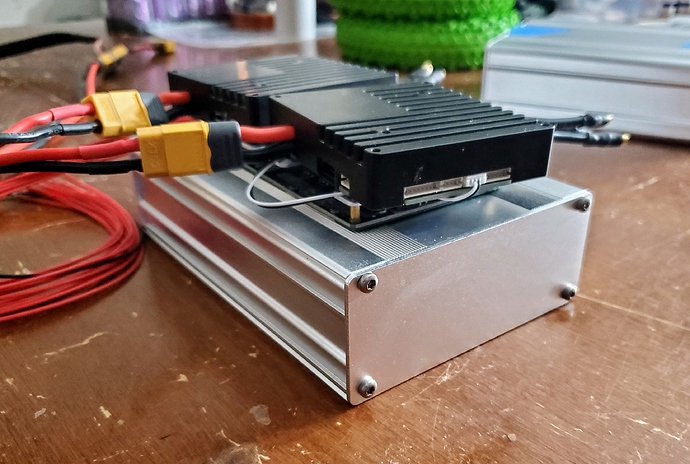 I’m going to turn this thing on and off with an ebmaker anti-spark switch outfitted with a improved push-button. It’s a small anti-spark. I like it.

I’m making a custom remote based on the feather/firefly platform for this build. It will have a CNC milled bamboo grip, a magical thumbstick and a king-sized OLED screen. I’ll include a materials list and some build pictures here on the thread. This remote can pair with up to 20 receivers, so I’m going to pair it with my kicktail and ditch the flipsky VX2 that I’ve been using.

I’m making a custom hunk of bamboo for this. It will basically be a 35" rendition of this deck https://tomiboiesk8.com/long-at-carver/ except that I will use different styling for the shape. I’ll post pics of the entire design and fabrication process for anyone interested. It has already been pressed. I’m milling it tomorrow, and I hope to have it finished by the end of the week. Then I’ll be building

I love those boxes! I was looking at them on amazon a little while ago.

They come in all kinds of colors and sizes and I don’t think making clean holes in them will be a problem.

This remote can pair with up to 20 receivers,

The first step in designing this deck was to make a mold to press it with. That begins in Fusion 360. Manipulating a plane is one of the easiest things that you can do in Fusion, and it is also happens to be the only thing that I can do. The main features here are that the deck is 25" from bend to bend with a 30 degree angle in to the nose and tail. The over all length of the deck will be 34-35", but the mold is longer to accommodate extra material. 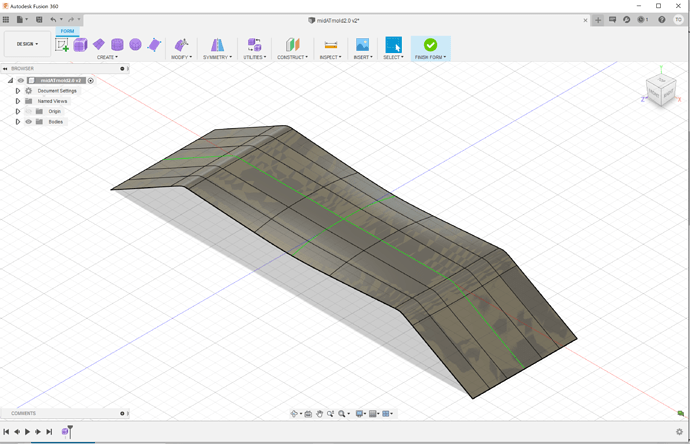 Once I have the CAD file made, I convert it into an .stl and export it over to the CAM software, Vcarve Pro. 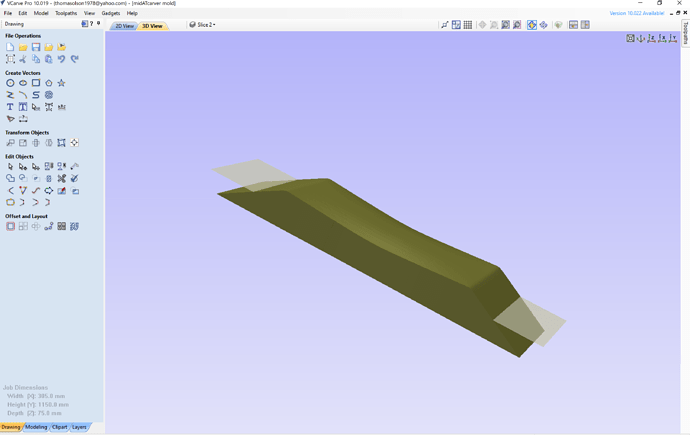 The mold is too tall for my CNC router so the CAM software makes it into two slices for tooling. 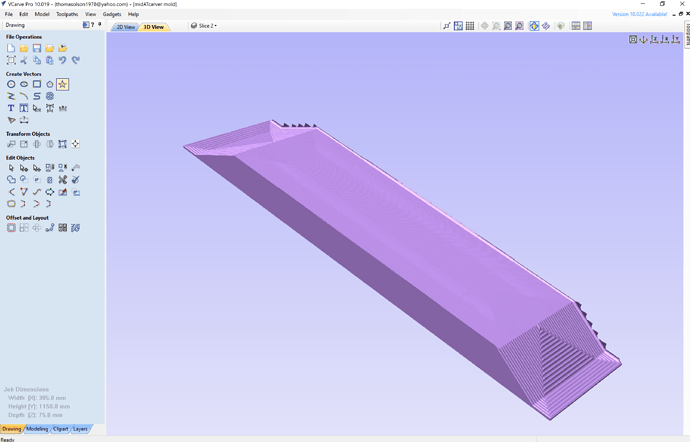 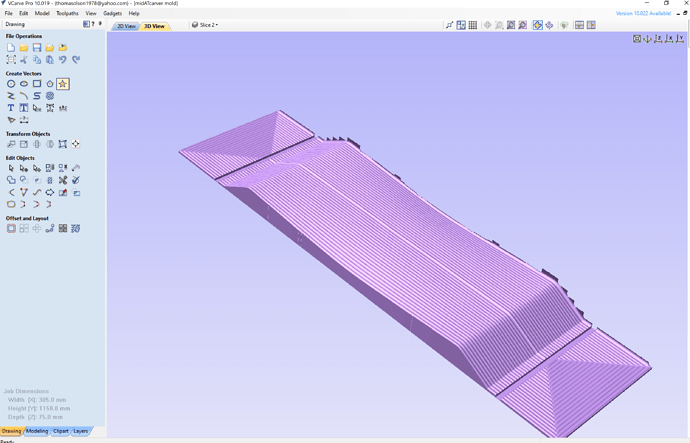 I make the molds from either foam or wood depending on what I’m trying to accomplish. A foam mold will work just fine for this design. I use wood molds for boards that get clamped like drop-decks. The foam that I use comes in 1", 1.5" and 2" thicknesses. You can get large 4’ x 8’ foam boards that are used for home insulation at big-box hardware stores. They cost $20-30. Foam molds like this can be made by hand using a rasp, but obviously a CNC has its benefits. 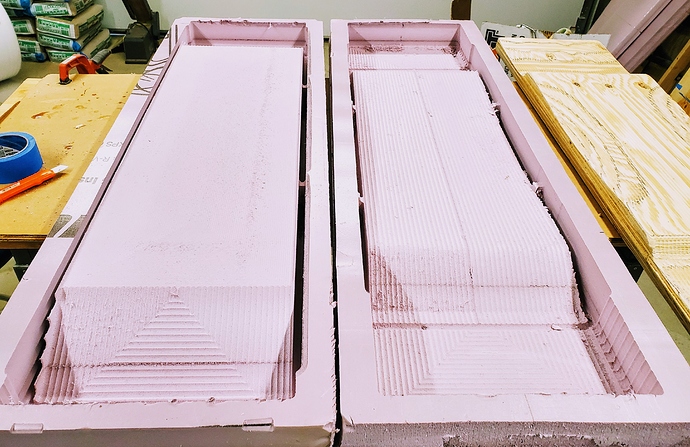 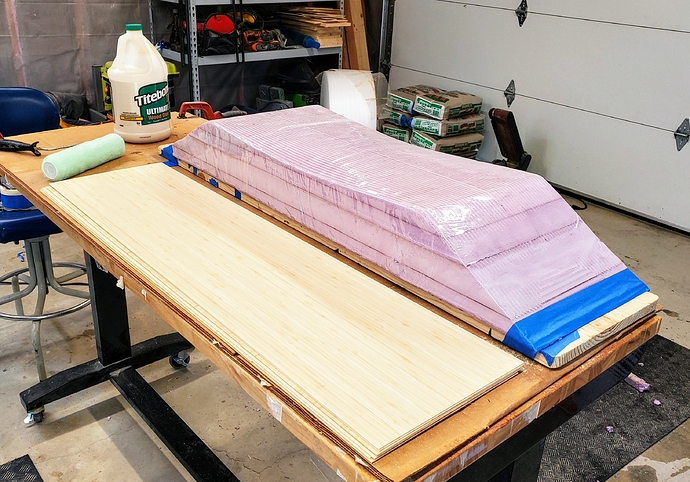 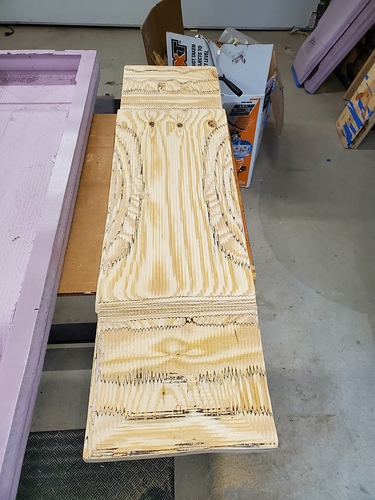 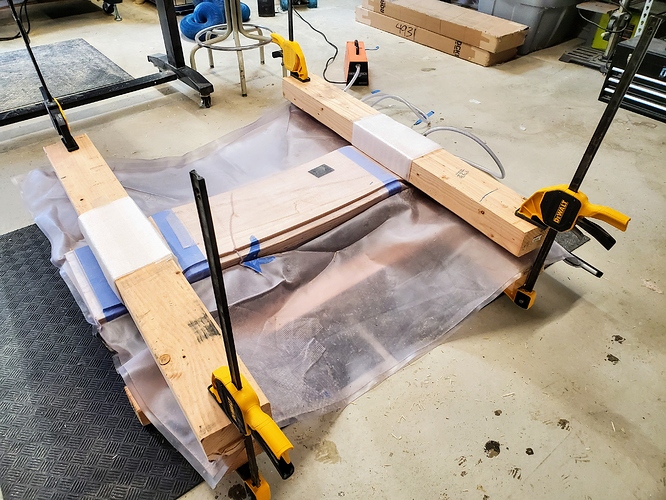 I forgot to take a picture of the pressing, but I included the drop-deck press pic above to give you the general idea. The deck gets glued together with good old Tite-bond III. I do it in two pressings because there are a total of 22 pieces of veneer and by time I get to the last piece, the glue gets a little too tacky on the first few pieces. Doing two pressings allows me to take my time.

The pressing turned out really nice. 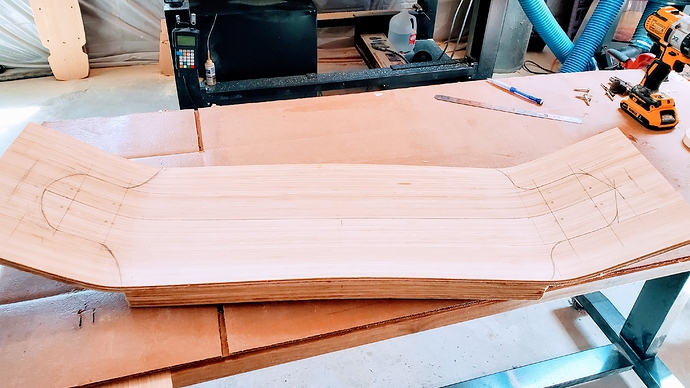 My CNC can’t drill holes on an angle, so unfortunately, I have to do that chore by hand. Doing that takes patience. You need to check and recheck you’re work. Then I use a punch to make hole-starters and a small drill-bit to make a pilot hole. From there, I slowly step up the bit size. This helps me make nice clean holes and it allows me a chance to possibly correct the small pilot hole if it’s a little off. This tool is invaluable for making good truck-holes https://www.roarockit.com/skateboard-building/rockitrulerflex-new-school/#.Xxd7J3uSnOg. Especially, for decks with a lot of contour. Roarockit has the goods. If you want to get into making your own decks, they’ve got everything you need to get you started.

I’m playing around with some different shape ideas. On one end I sketched a rather vanilla, but functional shape. The other end is something more medieval. I’m leaning towards medieval. Regardless, it will be hour-glassed towards the center to make the deck more flexible.

I made the tool-paths for the compartment today and started the milling process. Things are coming a long 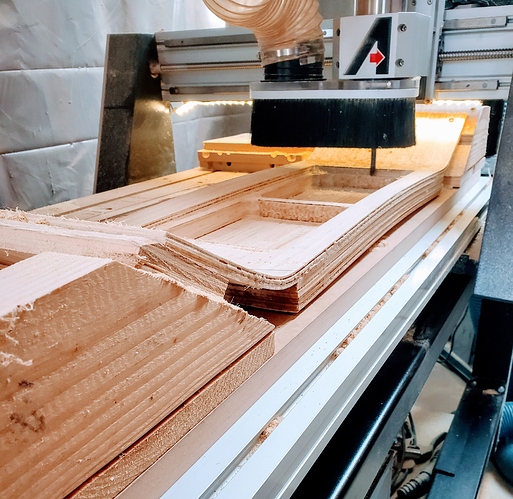 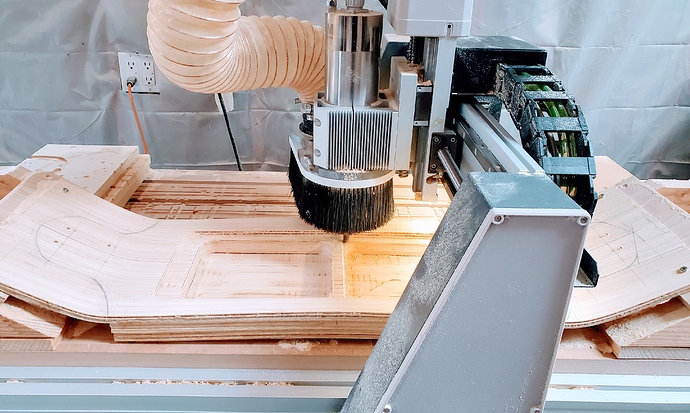 It helps to justify the cost, if you can use it on your entire quiver.

True. However, if you only have one, you can’t let your friends ride your other boards, which I do frequently

fantastic write up, I like how detailed you are.

Lol I’m sorry to break it to you

I can’t ride three boards at the same time

Pfffff what are you, not addicted or something??

Haha no, everything is benched

I feel this. I had two out of commission during school because I didn’t have time to fix them and I had to ride a push board for like two weeks

I can’t even push board, I’ve got 4 good analogs but it’s too hot and nasty out…I fucking miss late fall

I’m excited to see how that integrated deck comes together. I really like that deck. I have a few builds in mind for it. First, I need to sell some extra stuff, so that I can afford to finish my current builds. I’m really leaning towards those 3D serivises fat boys.

This pains me, but I’m about to say some thing nice about the flipsky VX2. It switches out with the feather really easy if you need to hook another remote up for a friend.
The feather works with both PPM and UART. The VX2 is UART only. To install the VX2, you just switch to UART only in the VeSC tool. When you go back to the feather, you just turn it back to PPM and UART. You don’t need to reset the pulsewidth. It’s still programmed. So the VX2 is an easy sub-remote.

That’s pretty convenient. I’ve got the Vx1 on one board, the g2b mod on one, one is the revel kit, and the last one will have the maytech dual trigger