This is my first “serious” build. Planning started a few months ago and I’m just waiting for my final parts to come in. I expect it to be finished for spring 2020 ride season!
My current board is a meepo v3 deck swapped with a landyachtz tomahawk with a bigger diyeboard 10ah (360wh) battery. It has been extremely robust so far but I am outgrowing it. I want to go further than 25-30km and faster than 45km/h. I want to build a board that can achieve what I want with tight budget in mind. (no all out precision trucks and gear drives unfortunately)

Motors:
I fell in love with the direct drive concept as soon as I saw carvons years ago. Low maintenance, light weight, real thane. I didn’t have a big budget and couldn’t buy torqueboards’ DD. But the elofty drive has gotten quite a few user feedback and most seem to be positive. I set up a group buy and ended up getting them from @nathan at esk8supply.

Deck:
I fell in love with the hummie deck earlier this year and everyone’s builds with it. Mostly because of the cutout and how sleek and “stealth” I can get it while still fitting a large battery. At the time, the hummie group buy was stuck at 12/50 people, so I decided to go with Torqueboards deck also with a cutout.

Enclosure:
I wanted it to be sleek and aesthetic, but broke ass me can’t afford a big ben enclosure. And I didn’t really like the “esc hump” on the enclosure torqueboards offers. 18650 is 18mm tall. And the cutout is 15mm deep. That leaves ~3mm of the battery sticking out. If I did something like what @bartroosen did with the rubber mat, that’ll be an ultimate stealth build!

Battery:
I want range! Before, 30km satisfied me. There were enough local trails, and I can transit to the Vancouver seawall for group rides and leisure afternoon solo rides. And then I got an ebike earlier this year, and that has completely spoiled me. My ebike has 70km + 70km range (two batteries). I can bike from my house, to the seawall, and back with only 1 battery! I can bike 2 cities over to North Vancouver trails, and see the rural coquitlum all on my bike with both batteries! Screw transit. I want to board from my house to the destination and back! 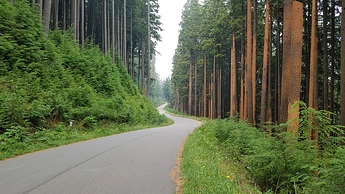 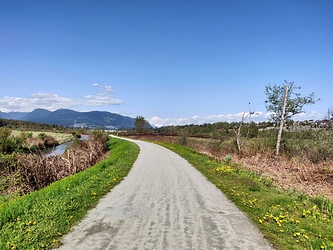 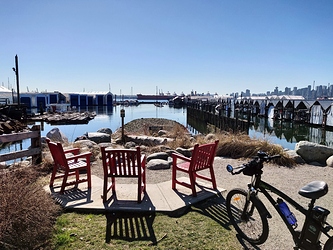 ESC:
I was originally going to go with aliexpress 4.12 single ESC’s. But I have hears reports that it can be unstable with 12s. At the time makerX came out with their dual mini esc and good reviews are starting to pop up. I expect to have 60 battery amps total for my build and this can definitely handle that. I decided to go with this and the black friday deal made it a no brainer. And the “mini” size is a nice bonus.

Wheels:
The TB110’s are getting high praise everywhere. I know I want big wheels to get over cracks and bumps on the road (coming from 90mm meepo hubs).

Remote:
VX1. I want the mode settings, and this is the best remote for it. Great feedback from everyone.

On/off switch:
Didn’t have the budget for a reliable antispark. And I didn’t like the look of loopkeys, and I just found out about Deckoz’ AS150 connectors method. Wayyy cleaner look! And I designed a 3D model to be mounted on the inside of the enclosure so it looks like a regular mechanical slide switch from the outside (inspired from his post).

Over the course of planning, some parts have changed…
Battery: 12s4p 40T is really pricey :’( Even with a great value battery builder like M.Hboards, it would come out to $450+ after shipping and everything. I looked up alternative cells and @Accrobrandon had a thread about liitokala 21700 that looked really promising. They seem to be 40T B-stock cells but the value for what you get is one of the best for non-oem cells. A 12s4p single stack battery made of these cells will be kinder to my budget. Plus, I won’t be utilizing the full 120a that the 40T’s can provide anyways.

Plot twist! While I was waiting on black Friday discounts on cells, accrobrandon wanted to sell the 12s5p battery pack he made for just the cost of the cells! 25% more capacity that cost 40% less is hard to pass up. The pack has only been charged ~5 cycles, so essentially brand new. Plus I won’t have to take the gamble on if the cells I get is a crappier re-wrap batch. I probably scored the best battery deal all year

With 864wh, I can go 70km range at near max speeds! And probably 85-100km at leisure/groupride speeds. This is more like it! And hence the “marathon” in the title

Deck:
I scored a smoking local deal on a brand new Landyachtz Evo 40 deck for $58 on black Friday! I was just going to hang it on my wall as art until a future (electric or analog) build required it. Around this time dexter from torqueboards said that there will be more delays (I was supposed to have the deck already when I had pre-ordered). I decided to take him up on his “refund pre-order” offer because I wanted to build over the holidays, and I just got a big fat non-stealth battery. No point in getting a specialized deck with the cutout with a thick battery that takes up only half of the cutout space… So I decided to go with the Landyachtz evo! Which was actually my deck choice for a non-cutout deck! This also played a part in the title 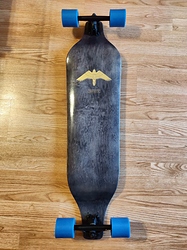 Enclosure:
Since I got a fat battery, I have yet to figure out an enclosure. I’ll probably DIY a nice-ish looking enclosure out of sheet metal/3D prints. A bolted down sheet metal for structure and integrity support. And the 3D print just to cover up the ugliness. If that doesn’t work out, maybe a rubber mat over the whole thing. Any tips for budget DIY enclosures will be helpful

Wheels:
The first groupbuy with 72kv elofty direct drives failed due to delays and flakiness of the supplier. We went with esk8supply’s DD’s instead at 58kv. Due to the kv change, I would need a bigger wheels to keep my desired top speed (~55-60km/h top speed). 120mm cloud wheels have great reviews and is a solid choice. Esk8supply sells it too with DD kegle adapters for convenience! 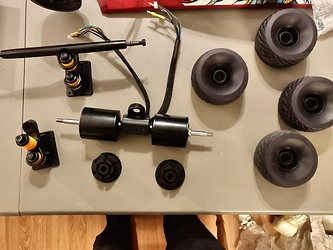 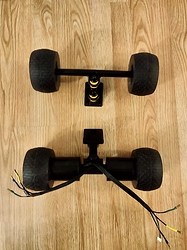 Hope I won’t go over budget too much by the end of it! Right now I am only waiting on the battery and esc which should be here soon.

Thanks for reading and I will keep this thread updated!

Mounted on the trucks 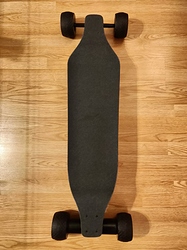 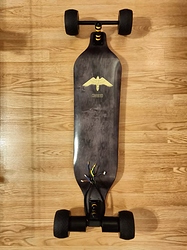 How level is the board with split angles + DKP trucks? I know others have done it, but I have this feeling in my gut that it just won’t feel nice.

its level as far as my eye can tell. I looked it up before and a few users have DKP on the evo and it rides great.

I might experiment with dkp vs single king pin later on. But I’ll leave it as dkp for now for the height/clearance advantage

This will be a cleen looking board. Save some Cash and get one from @eBoosted his enclosures are beautiful

@murdomeek
Is that just the photo or your rear wheels are pointing inwards?

Save some Cash and get one from @eBoosted

Thissss. Take the $$ you got from the TB40 refund and get eboosted’s evo 40 DS. Add a small spacer for your batteries and you will not regret it.

Gotta keep the lines on that Evo.

the battery and makerX esc has arrived! =D
I’ll be making progress this week

Which cells you got in that 12s5p? I got the 30q from samsung but only have 645Wh.
Nice build nevertheless, looking forward for the end result.

Finally had time to work on it more after the holidays, relatives coming over, vacation, etc are over.

Started programming the VESC yesterday and I have a few questions. @mishrasubhransu @BillGordon If you guys can help that’d be much appreciated!
(Screenshots of my settings are below)

My current setup:
elofty 58kv direct drives
120mm cloud wheels
makerx dual esc
I want to run it in BLDC mode
They are connected via internal canbus (I think?). It is NOT split ppm

Also, thanks to @mishrasubhransu’s for the advice of using “Current” / “Forward/Reverse” PPM control and limited the reverse ERPM. Limiting ERPM it to 5mph reverse and keeping -60a works well.

Torque is awesome. There is no hill I can’t climb. Make sure to change the sensorless erpm, under settings->foc-> hall sensors, to 4000 min for good torque. Because when it’s set to a low numbers say 1000 then it uses sensorless mode just after starting which doesn’t know the magnet position accurately and hence is inefficient i.e. can’t produce enough torque and motor heats up more than it should.

Thank you so much for your help. This is alot more technical than programming a single belt 4.12 I did a while ago, and its all getting a bit over my head. 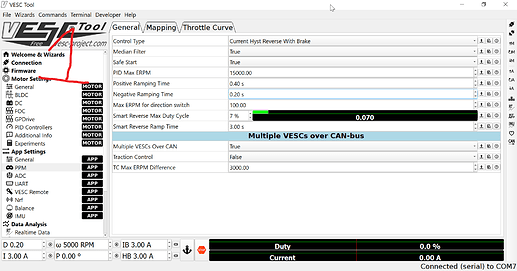 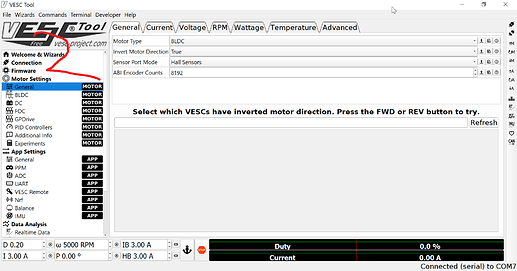 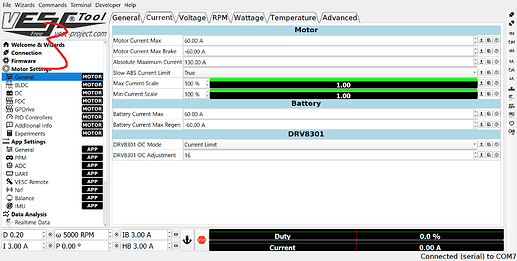 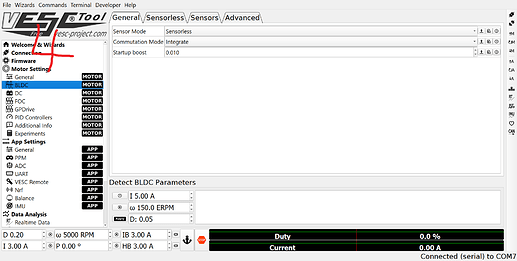 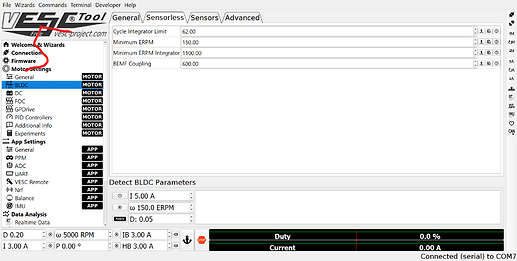 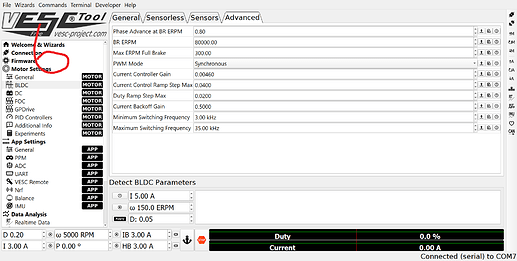 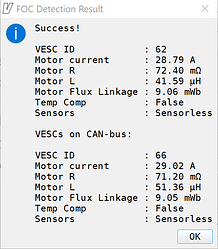 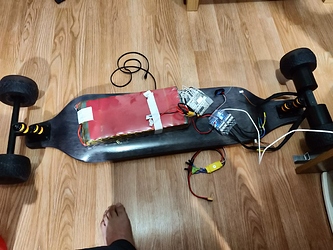 I highly recommend getting some Riptide bushings. I can’t even begin to stress how much of a difference you’ll feel when carving

How much do you weigh? I might have some spares

Does this apply in BLDC mode as well? I tried to change the “minimum erpm” from 150 to 4,000 and 10,000 but the motors made screetching sounds and didn’t work. [screenshot 5]. Am I changing the wrong thing? 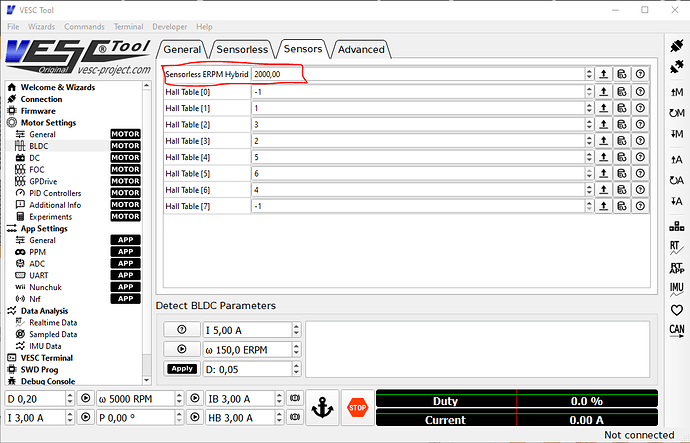 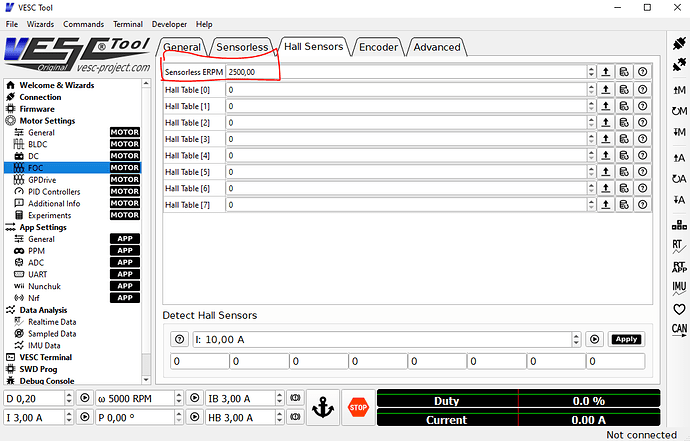 Where do I limit the reverse erpm? Right now my “reverse” mode is still at full speed. I tried changing “max erpm for direction switch” [screenshot 1] but it is still reversing in full speed.

Use this to limit the reverse speed, you can calculate it, but it’s easier to just test, start with something low like 1000, if it just stutter it’s too low, increase until the response is smooth 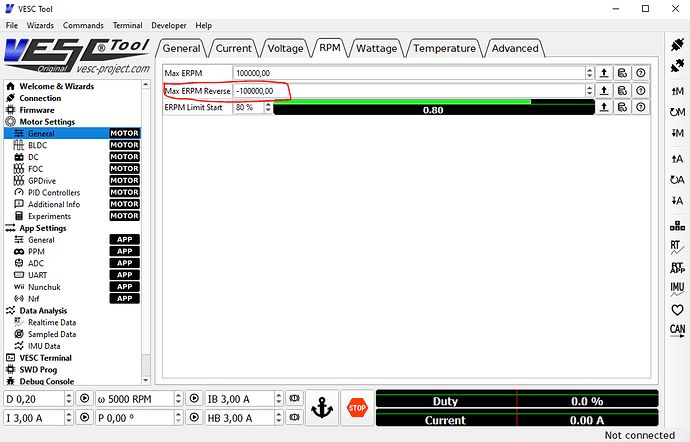 Does this VESC act like it’s programming two esc’s over canbus? (It seems so from the above tests and it says its over canbus) Do I put 60a or 120a for motor max? [screenshot 3]. I want 60a/-60a max per motor.

As far as I know only if they are connected over CAN and only when doing the wizard, the individual settings, like the sensorless ERPM you have to change on each VESC, you can just enable CAN forward when programming instead of plugging in the other USB, also the current settings are for each side of the VESC

Thank you so much!!

Where can I do this?

First connect to one the VESCs as usual, the hit scan, select the other VESC and hit the CAN button, and just go programming as usual, don’t forget to always read the settings before changing anything so you don’t mix between VESCs, even more the app part were one side will have your remote and the other will have nothing configured 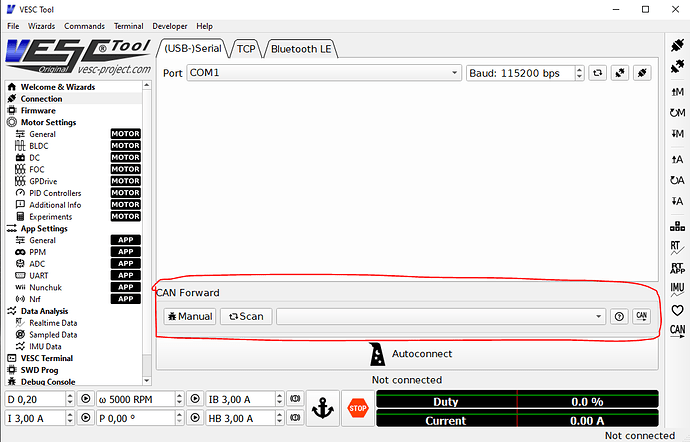