The purpose of this topic is to share my experience of purchasing a new hand crafted longboard deck and enclosure, to learn from you all in requesting your advice, and to help companies improve their products and services.

I ordered a Custom Subsonic Century 40 from Subsonic Skateboards and have not been pleased with the quality and care of both craftsmanship and attention to detail in the fabrication, quality control, and shipping of my deck(s). My custom order was for a beautiful carbon fiber skinned Century 40 deck, eBoosted enclosure, pre-installed enclosure inserts, and pre-drilled eBoosted enclosure. After the shippers brought my board to me I was one happy girl before I opened the box containing my shiny new “Custom Subsonic Century 40”. After all I had high hopes for my 1st DIY electric longboard having researched Subsonic skateboards on this eSk8 forum, on other skate forums, and with the help of friends who also own Subsonic Century 40’s decks. In my mind Subsonic seemed like a deck solution for my DIY eSk8 dream board with their implied professionalism and focus on the idea of “Custom” built skate decks. On Subsonic’s website the first use of bold and italic formatting regarding product descriptions can be seen as:

Custom boards typically take around 10 business days for production, as each is made to meet individual specifications998×114 13.2 KB

The first Century 40 deck I received had 3 issues.

The 1st issue was that the Century 40 deck had a series of scratches on both the high side of the drop of the tail and on the tip of the nose. 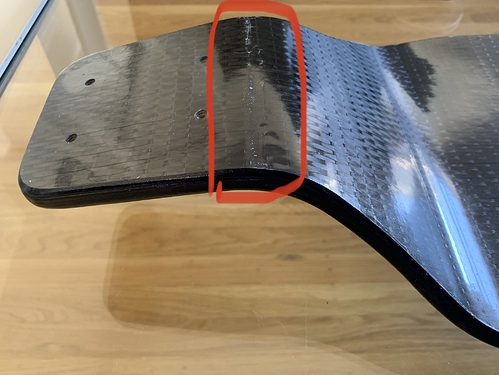 Subsonic Century new 12100×1575 466 KB
Having ordered the Century 40 deck, an eBoosted enclosure, gasket and mounting hardware, and drill holes for the enclosure and board, it was obvious that one of the fabricators at Subsonic Skateboards had scratched up a brand new board when they were drilling the holes and fitting the inserts and enclosure to my brand new shiny and clean clear-coat covered carbon fiber skinned Century 40 deck. I do not know any of the fabricators of my Subsonic Century 40, but from my experience Subsonic Skateboards procedural deficiencies limit both the quality of craftsmanship and the opportunity to catch defective products from shipping to their customers. Bradley at Subsonic Skateboards said it best at the 4:09 time mark in Subsonic Skateboards official YouTube channel video called “How to Install a Battery Enclosure on an E-board”, where he can be viewed and heard stating: “It’s all about the prep work, actually drilling and assembly isn’t going to take very long”. 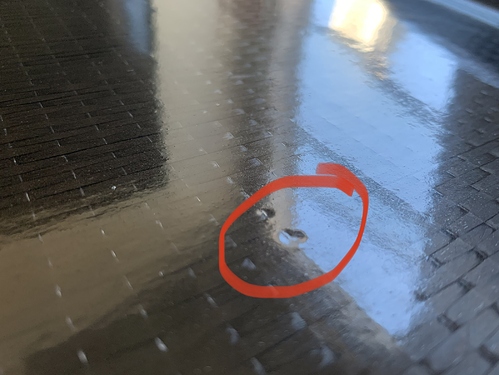 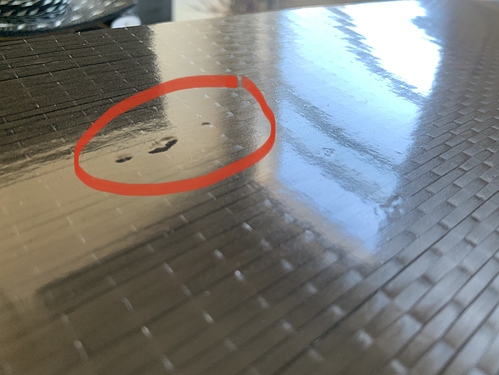 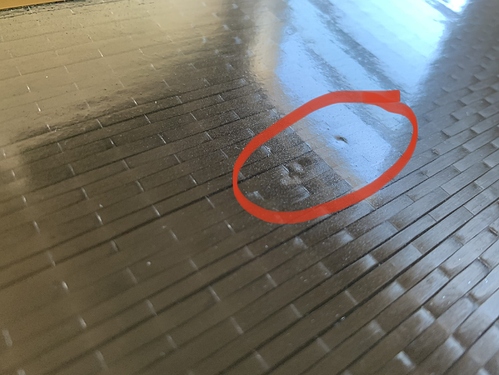 The 3rd issue with the Century 40 deck is the very visible blemish on the carbon fiber on the drop section of the nose. 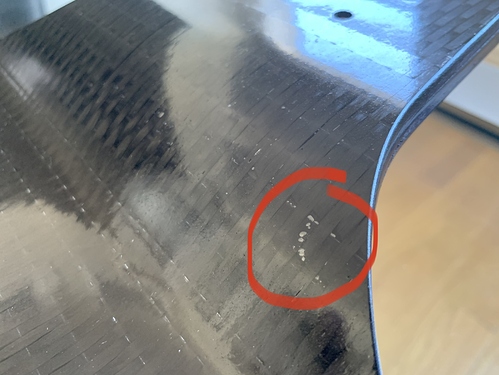 I contacted Anne at Subsonic Skateboards and advised of the 3 issues with the Century 40 deck I received, and she confirmed with me that the fabricator that worked on my board did indeed scratch the tip and tail of my Century 40 because it was not properly padded before the enclosure mounting process. Anne was nice and offered either a refund or to send me a return label so that I could send my deck back to have it repaired. At that time I was optimistic that the repairs will be done properly. So off it goes back to Subsonic Skateboards, fingers crossed, despair fades as anticipation builds.

I am once again stoked when I receive my repaired Subsonic Century 40 deck, giddy being armed with a new Lacroix Stormcore 100D and a future Winfly 21700 battery array, my 1st DIY board is coming to life… I thought.

I open the 2nd Subsonic Skateboards box shipped to me, the second Century 40 deck I received also had 2 issues.

The 1st issue with the Century 40 deck re-issue is that thousands of very visible dust and dirt particles are perfectly encapsulated on the clear coat…. what, that’s clear-coat is also not so clear this time. There is no very visible shine, or polished appearance from the clear-coat. So now this board has introduced 2 new deficiencies that were not present in the first deck. Sigh. 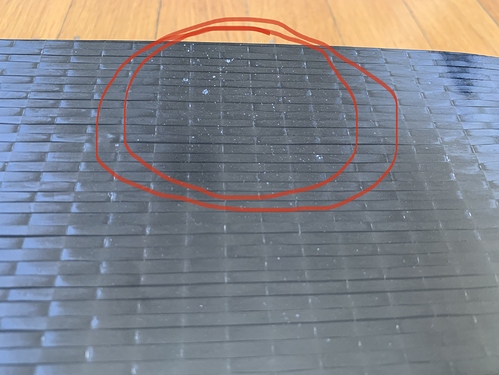 The coating is hazy, looks like the deck sat on a floor or laid on a horizontal surface and fabrication dust fell on my deck, and clear-coat was applied over that dust and differently to account for the hazy look, or maybe that is just a bunch of dust and dirt perfectly preserved throughout the vertical clear-coat medium — suspended and capture in a way that visually frames the new materiality of my deck as dusty dirty carbon fiber.

Just like the 1st Century 40 deck I received a month a few weeks earlier, the 2nd issue with the Century 40 deck is the same as last time. Please see “Deck 1, issue B” section and photos above. The very visible recessed indentions in the carbon fiber on top of my repaired hazy looking clear-coat covered carbon fiber skinned Century 40 deck were still present, with the added hazy clear-coat to visually subdue those once clear indentions. Now the indentions look different, hazy, hazy indentions with visible dust speckles and finger touchable dots to experience as you were invited to get close and personable to that beautiful carbon fiber weave. I feel tricked! What was once a shiny clear clear-coat is now a hazy prickly coat over carbon fiber. The materiality, visual communication, and visceral understanding of the previous multiple layers regressed substantially. Now I understand the follow up email sent from Anne @ Subsonic before my deck was sent back from me, asking if I would like them to install complimentary grip tape on the top of the deck. I had no interest covering up presumably fixed carbon fiber skinning with grip tape. What I received was a hazy looking clear-coat with prickly coated dust and dirt preserved over indented carbon fiber, this was not what I signed up for in my purchase or repair.

See how quickly a reasonable person can have thought opportunities that may directly contradict the companies original operating intentions?

Looking back at this whole experience with Subsonic Skateboards, I would have rather kept my 1st deck and fixed the scratches myself rather than sending the deck back for repair only to receive a second more defected deck that I cannot easily repair myself. From deck 1 to deck 2, the quality went down, time keeps progressing, and my 1st DIY eSkateboard is being delayed again. So here I contemplate sending this repaired deck, my 2nd defected deck, back to Subsonic, and hope I can get 1 of 3 decks fabricated, inspected, and shipped to me in a quality and uncompromised manner. Whew, trial and error Is wearing thin.

While I learned from others experiences with Subsonic that ultimately made me feel comfortable in purchasing my Subsonic Century 40, as I continue to see the care and quality of other deck fabricators and deck skinners and companies on this forum, I realize I received the least quality deck from Subsonic Skateboards I have seen, and one of these poorest quality carbon fiber skinning I have seen. That makes me feel disappointed, the product I receive is the antithesis of what I believe I should receive, based on precedent provided by other friends and forum members experiences.

Any thoughts, feedback, or comments are appreciated?

My first question, how long did this whole post take you to write out?

My first question, how long did this whole post take you to write out?

That’s an excellent question right there

I have the feeling shit’s bout to hit the fan

Sorry I haven’t read the whole post but from what I read, @Bradley Subsonic have been hit pretty hard by the corona virus. I understand it may not comfort you in your disappointment.

That being said, and I mean no disrespect but are you looking to sell those?

Way too long. I’m just doing my best to be as clear as I can, cause I really want to like this deck.

Someone’s else had an issue with a subsonic, in think it was @hans_maier poorly drilled enclosure holes if I remember correctly. He also ordered 2 if I am not mistaken.

Good point, and thank you for your concern. I waited 3 months for this deck, I was fully informed after purchase by Anne @ Subsonic that health issue, and was fully prepared to wait until they could manufacture safely, concerning health. The duration of the wait is not the problem, rather the quality is the issue.

That being said, and I mean no disrespect but are you looking to sell those?

I’m still trying to process my options, let me get back to you on this.

Yes, I saw that one too, thank you for advising.

I understand those decks cost a pretty penny and I feel your pain because you spend your hard earned money and expect quality. If the problem isn’t structural, I mean does it feel like the CF skin will come off? If it doesn’t I would ask a partial refund and find someone to refinish it.

Try being more concise instead

I understand those decks cost a pretty penny and I feel your pain because you spend your hard earned money and expect quality. If the problem isn’t structural, I mean does it feel like the CF skin will come off?

Regarding your question about carbon fiber coming off, I have no clue, but good question. However if the lack of care involved with the 2 iterations of my deck are considered, I am not sure I can fully qualify aspects of the deck I cannot see as being properly done with best practice, therefore questions arise around the possibility for other imperfections between those 7 plies of maple and fiberglass that may negatively affect the structural integrity of my deck.

If it doesn’t I would ask a partial refund and find someone to refinish it.

Thank you for your reply, I will keep that in my list of possibilities as I think about what to do with this deck.

Personally I’d look to get a refund on the hazy peach fuzz deck and not try for a third time.

Sorry about your situation. That feel of having everything ready to go except that one last part.

Try being more concise instead

Thank you. Do you have any other input to assist me?

Can someone put in a TLDR at the top?

How much does the second deck honestly bother you?

Will grip tape be covering this spot?

Can someone put in a TLDR at the top?

Thank you for the request, actually I cannot edit this post. Already messaged @BillGordon about this.

Shiiiit if I shelled out 500 big green ones, even the tiniest speck would bother me.

I’m guessing on price but I bet I’m close

I thought you bought 2 decks but you bought 1 and sent it back to refinish?! Did you have to pay any shipping?