No, this isn’t an attempt at sneaking in a build thread right before 2019 ends to enter the best build competition. This is a belated thread for my first build, which I started last Summer, and “completed” this May. (Everyone knows a build is never truly finished) 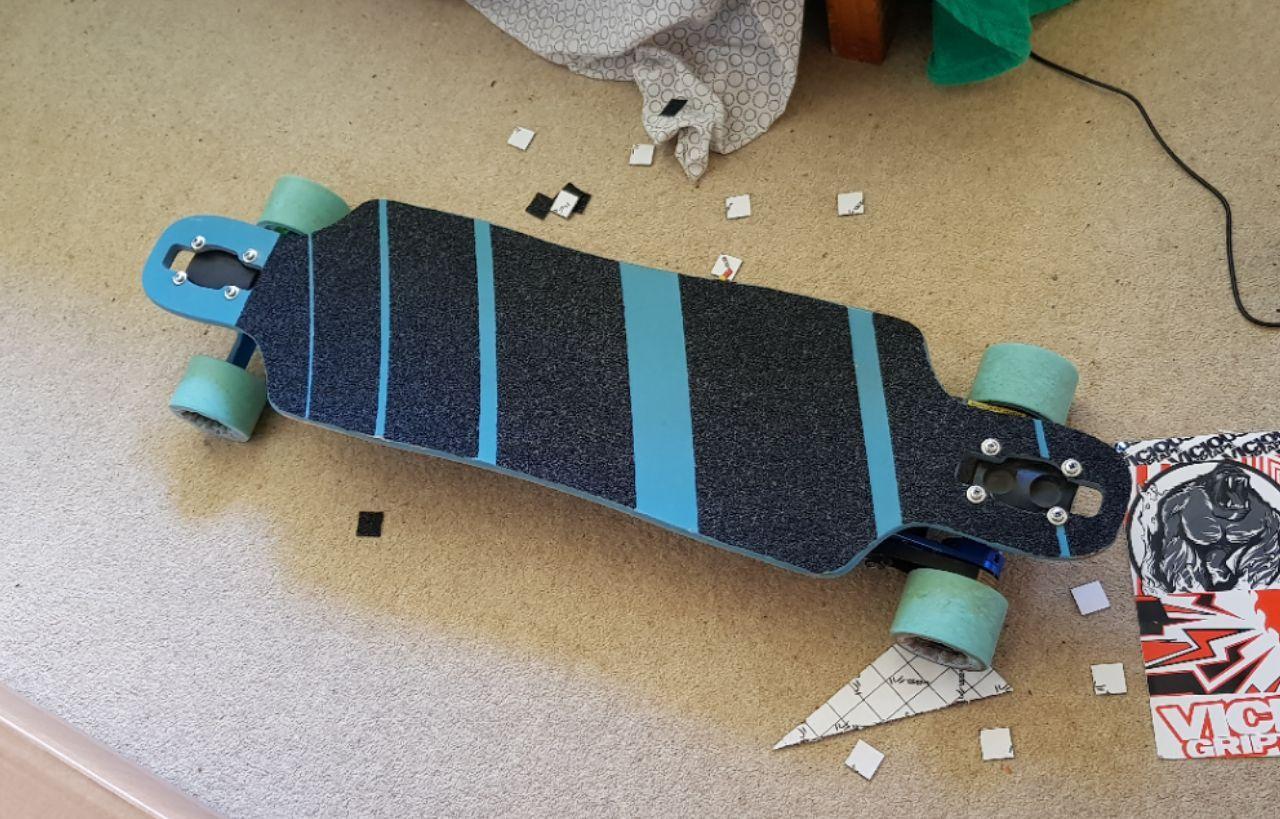 The main point of this thread is to give new builders an idea of what problems they may face, and how to avoid them, by learning from my mistakes. 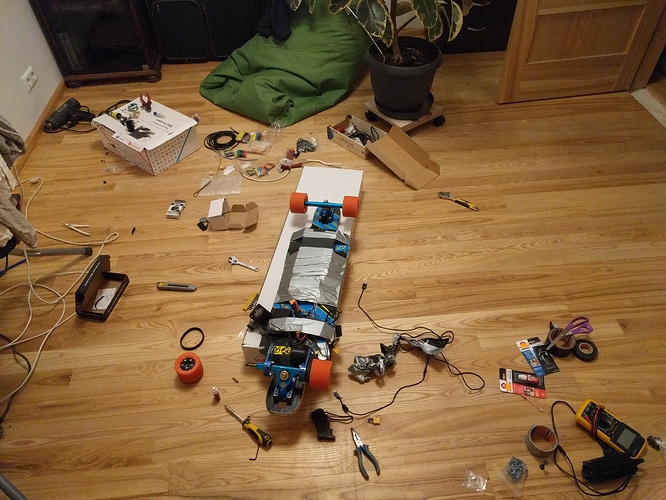 The main mistake of my build was not following @b264’s order in which you should plan by:

Because of this mistake, I ended up having to use duct-tape to hold all my internals until I could both

I replaced the duct tape once every 2 weeks, basically before it would have worn out / lost its stickiness. 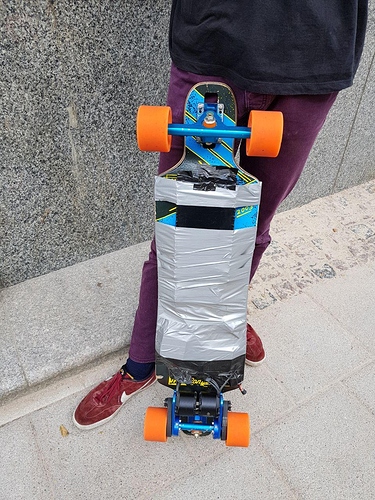 Eventually I got an enclosure made out of ABS plastic from esk8.de, which is quite bad. All it holds is my ESCs. The battery I attached with velcro and screws to the deck with threaded inserts, which I bought at a furniture store, and turned out to be horrible because they would break when I screwed them into the wood. 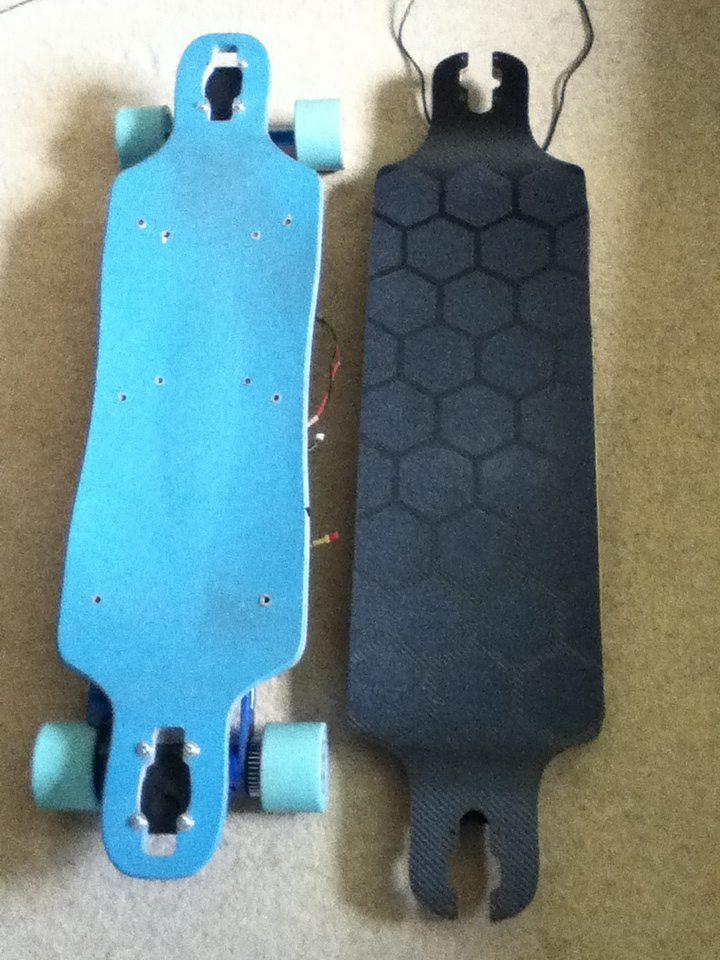 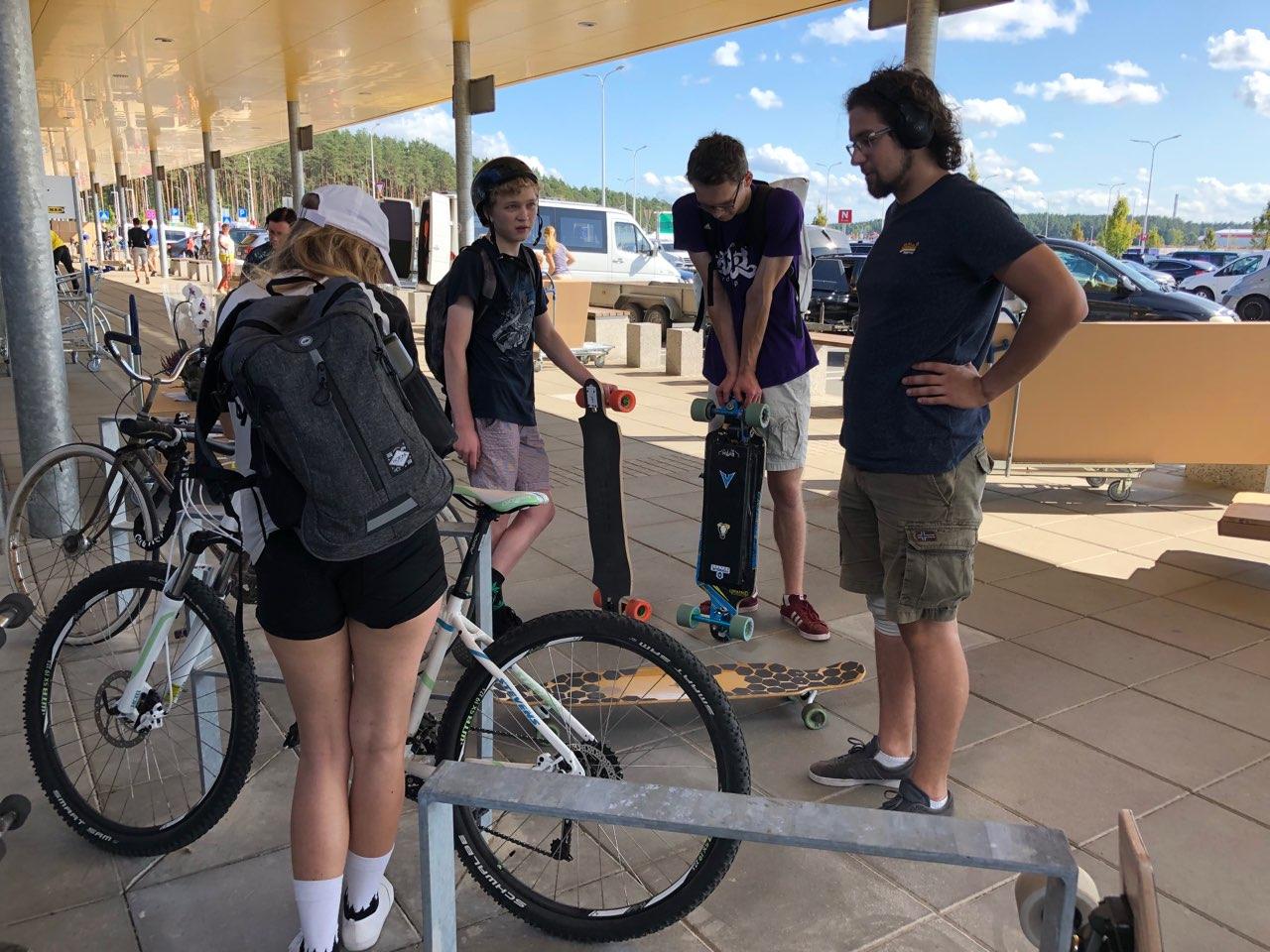 Despite having a discharge capable BMS (which ended up being a very smart decision because loopkeys are sketch and there weren’t any durable anti-sparks at the time), the button I ordered from china ended up being a momentary push switch, but I needed a latching one. I ended up using the switch from a broken lamp instead, and never got to the point of replacing it lol. 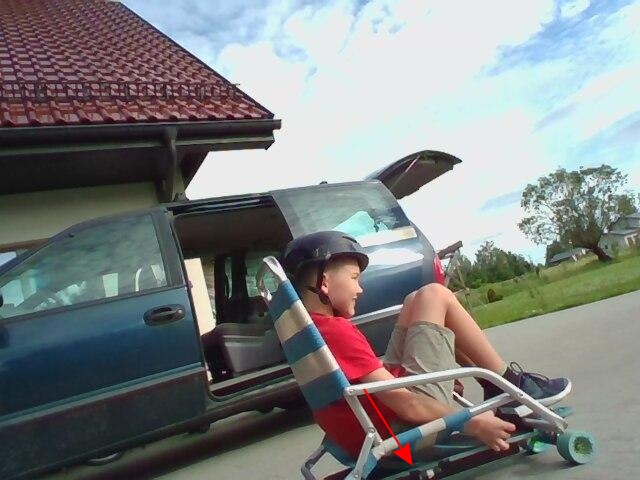 Another major downside of my board was the battery. I got the skilled battery builder @pjotr47 to make it for me, and used cells that would make the total capacity below 160Wh so that I could legally fly with it in the EU. (Which I did twice)

It’s a great battery, just the range really sucks. In hilly Scotland I get a range of about 4.5km, which is barely enough to get to uni. So I would have to charge 2h at uni with my slow charger, and only then I could get home. In flat Latvia I get around 6km – enough to get to and from the post office

Also, because the cells are held with spacers, the battery is quite safe imo, however it takes a lot of space. So much, in fact, that I could replace it with my brother’s 10s4p battery this summer while his board was broken 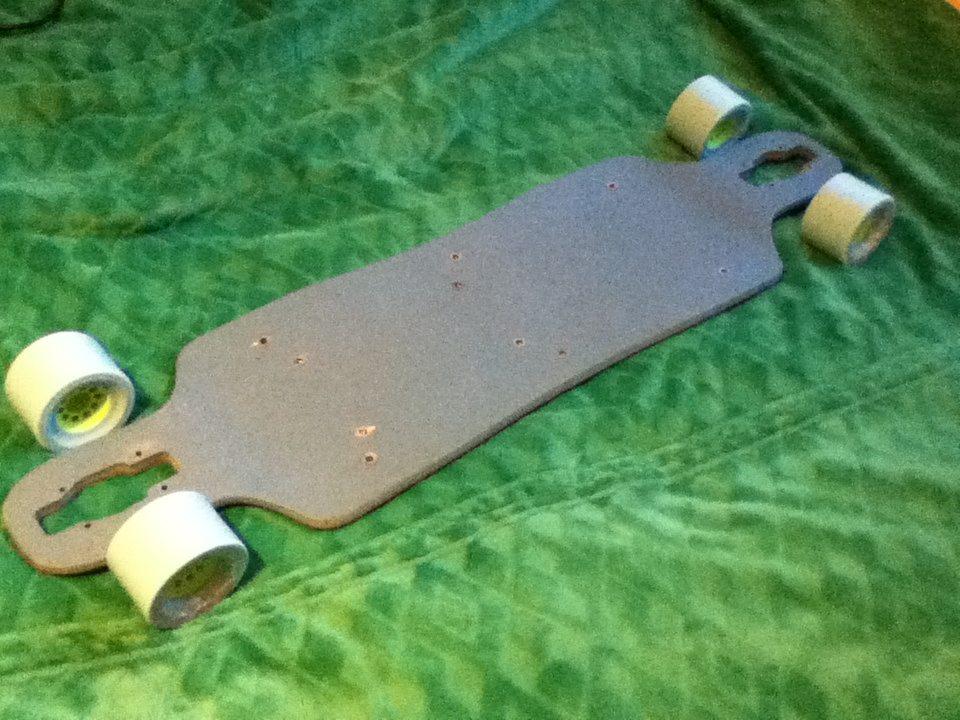 As you may have noticed, I painted the top of my deck in an attempt to give it some style. The paint job ended up pretty ugly because of the uneven edge where the masking tape went. I recommend painting the entire deck, not just 1 side. I also upgraded from 80a caguamas to 77a blue ones, which match the color of the deck once they get dirty. I picked caguamas over flywheels because of cost, and durability. These wheels do not chunk. the 77a ones are actually really good, they are nearly as comfortable as Evolve’s new 97mm GTR wheels, despite being much smaller and lighter. 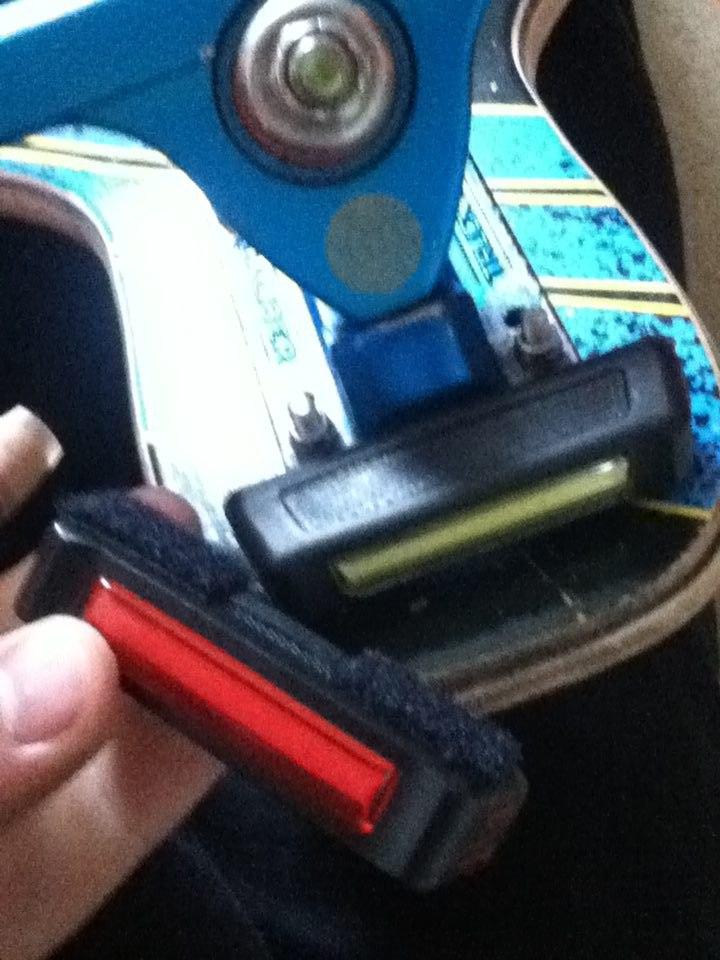 Another lesson I learned the hard way is that velcro cannot be trusted. I used heavy duty original brand velcro to add these lights to my board, and… both fell off and I only found one lol. That’s why I used screws to secure velcro strips to my deck, which wrap around the battery to hold it secure. So far so good, but I recommend getting a fiberglass enclosure that can hold the weight of your battery instead. 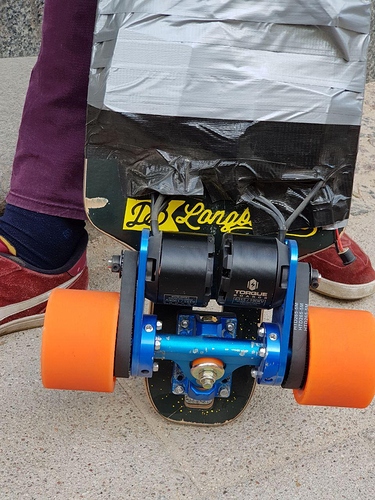 After riding my board for a while, I realized that 14T really is problematic for the drive pulley, because of belt slippage. Also, I had become a speed addict, and wanted to go faster, so I upgraded to 18T pulleys. I had to increase my motor amps, but they work perfectly – no more slipping! Honestly work better than my brother’s mount with a single idler, because his belt still slips on heavy breaking. I’m a firm believer in lower kv motors and larger drive pulleys now.

As you may have noticed in the picture above, my mounts were not in line with the wheels. This is because Caliber trucks are horribly soft and my 2 piece TB mounts couldn’t be tightened to stay level. This is no longer a problem thanks to the new 3 piece design, so be sure to check what your mount uses. Also, I recommend forged or precision (CNC milled) trucks, because calibers do bend slightly under heavy usage.

I later fixed the belt alignment issues by using spacers between motors and their mounts. I don’t have a picture to show, so please ask if you’re interested. 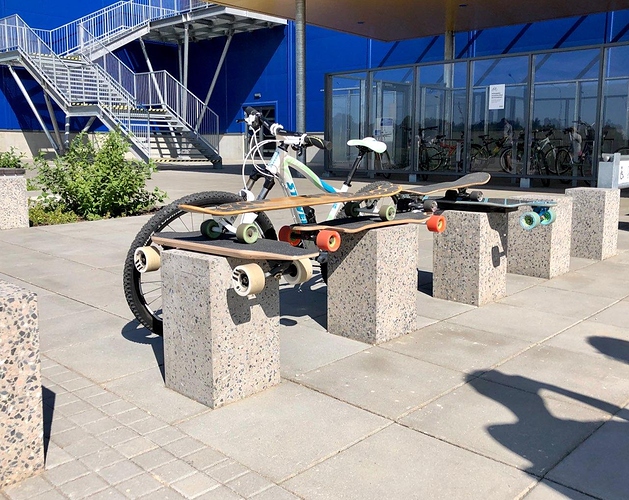 My top speed was around 48km/h when I had my 14:36 pulley ratio (which has enough torque to throw me off), but now it’s 58km/h with the 18:36 ratio. The higher speed definitely kills the range some more due to increased air drag.

That’s all I have to say for now. Happy new-year everyone!

Plans for the future:

Well documented progress man. Best of luck to you at your internship. Earn yourself a permanent position through hard work.

Earn yourself a permanent position

Thanks man! I did, and that paid for my brother’s build, which will have a thread up in the coming days

In the US. In Europe most airlines allow 160Wh. Not that airport security would know, but yeah.

Now I’m just jealous. I’m standing in the airport without a board because a 10s2p of 30q still is illegal to bring

Are you actually in Scotland?

Yes, Edinburgh. But atm I am with my family in Latvia for the holidays.

The main mistake of my build was not following @b264’s order in which you should plan by:

May I suggest one edit though? It’s kind of ambiguous to a noob what you are trying to say in the quote above…

Cast trucks are prone to being weak and have minor differences in size and shape, whereas precision trucks are strong, CNC shaped and are pretty much perfect every time making it a lot easier to mount to.

Ah, sorry, meant forged instead of cast. My bad!

I like this whole pitfall aspect of the thread. Very helpful.

It really is a live and learn thing when you start out and as @Halbj613 stated, if he had read it he may have saved some money.

Hey don’t beat yourself up, You came good in the end lol

You came good in the end lol

You know what I mean? Just messin’ with ya.