This is the same build that I started on the other forum, but I finished it here.

Most of you know the story by now about how I purchased one of the earlier decks from Jamie (redemberboards) and ended up selling it, only to buy it back. If you want more details, feel free to ask or read the older thread.

Skip to posts 15 and 16 if you just want glory photos.

Update time! Got the motor mounts in from @akhlut and set everything up. I’m not sure if I’ll be able to run 15mm belts or not but I’ll measure later.

@akhlut was awesome to work with. These mounts are bulky like I wanted them and he even had the idea to shape them like the ends of the deck which I love.

It may not be as flashy as all of you big kids with your gear drives, but I think the raw metal look of the assembly is pretty sweet! 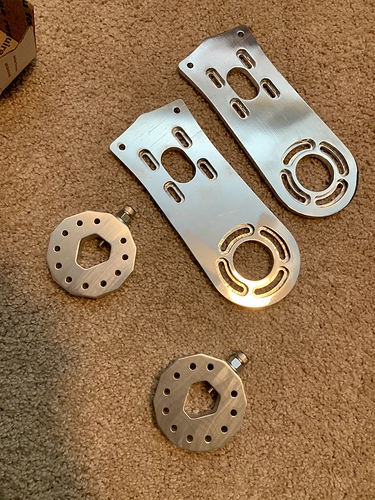 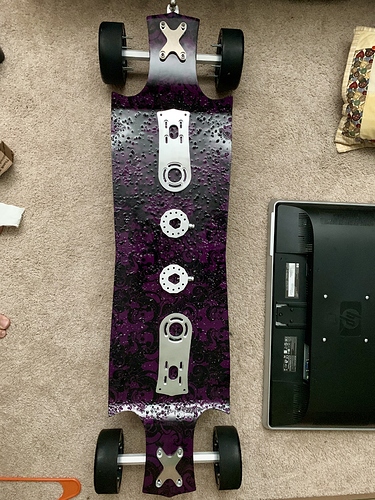 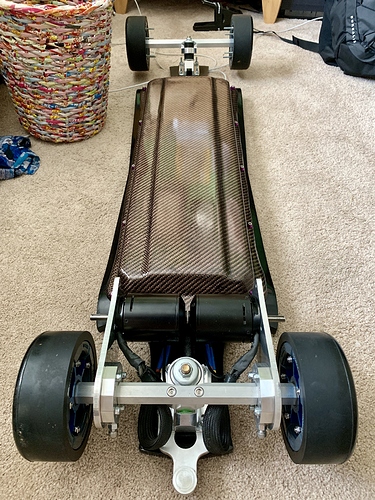 I gotta second that, running @akhlut mounts on both my brother and my board. Super good looking and solid as shit.

but the angle was wack

I love this lol. I’m pretty sure all of us have felt this pain

It’s been a while since I updated this thread, but progress is being made. ESCapes will be used as my controllers, and yesterday I wired those up as well as the loop key which means all of the wiring is done. All that’s left to do now is make a can bus cable, receiver cable, and then drill a hole in the enclosure for the charger. I’m using a 3d-printed riser to hold my loop key since I don’t want to take a Dremel to this and I’m going to purchase a metr pro to get me voltage so that I don’t have to use a voltage meter. At the very least, I want to get the motors spinning by next week.

Also… I snagged these 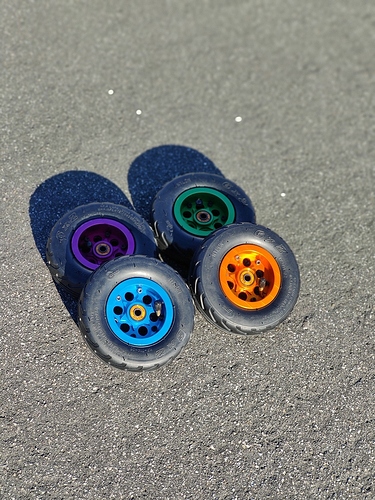 Thanks, now I need to get mine anodized. Dick.

they are going to look sick on this build!

Looks really sweet! What’s that metal thingy at the end of your rear truck, attachment for trolley?

Attachment for trailer. That’s in California though at the moment, I might have it shipped to me. Eventually the goal is to make this board reliable enough to go across the country.

Pay No Attention To This

0 Likes, 0 Comments - Pay No Attention To This (@bens_esk8) on Instagram: “Dream board is working!!” 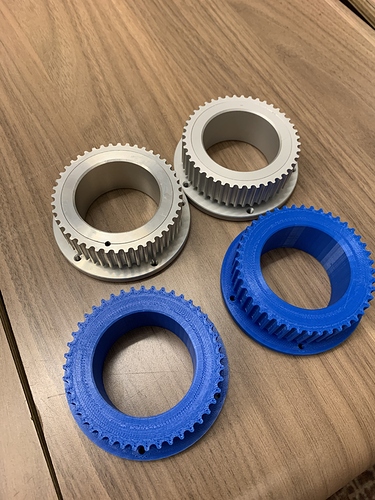 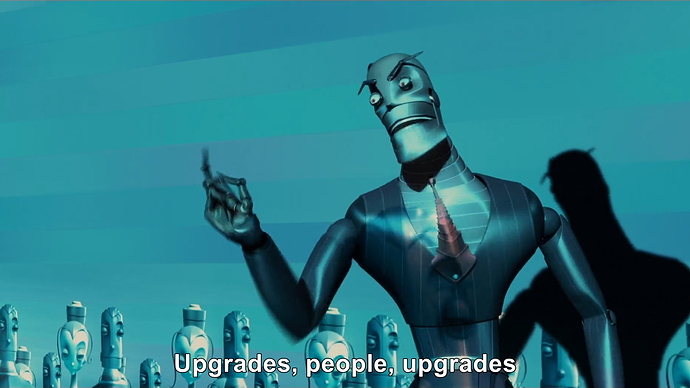 Probably got the last package from Europe for a while. 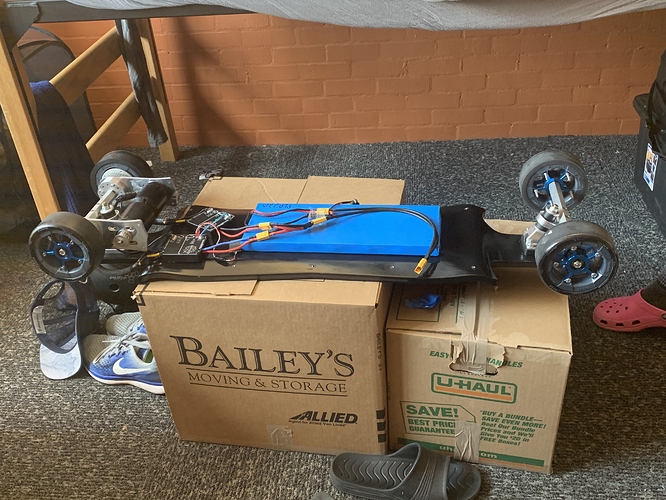 She’s all ready. All of the parts are there and COULD be assembled but instead my university is kicking us out bc of coronavirus and I’ll have to leave her here. 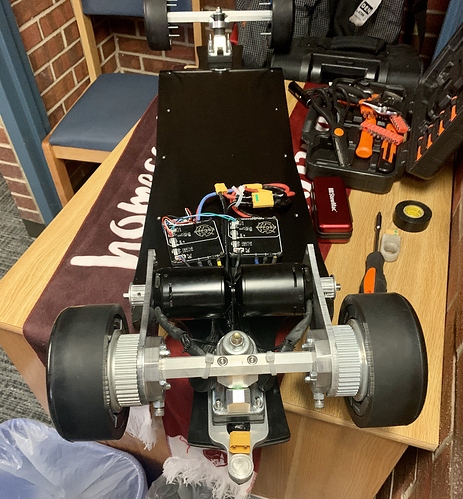 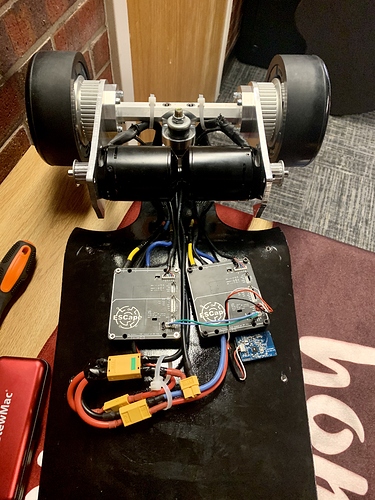 After half a year of waiting, I’ve finally got most of the parts back together and can continue on the build. Unfortunately my charger and belts are still a 2 hour drive away but I might just order them off amazon. At this point it is absolutely ridiculous how long I have been putting this thing together. Hopefully slow and steady wins the race and my trucks won’t bend… I’m pretty light and will be running this on pnuemies a lot of the time anyways.

Started working on this in April of 2019… 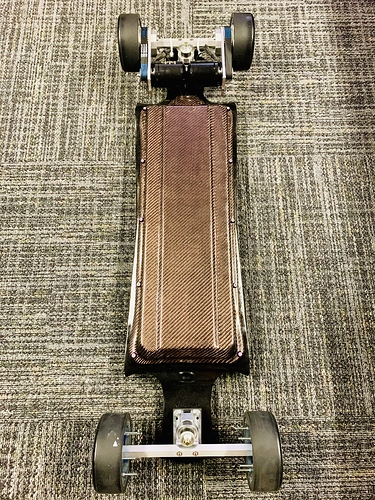 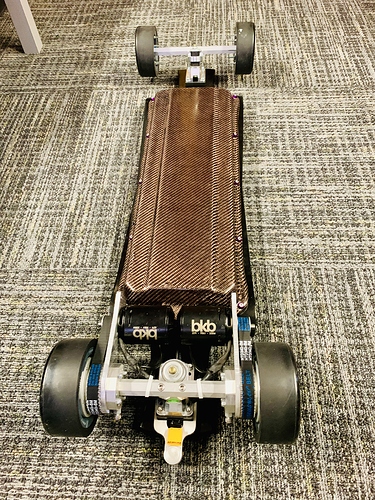 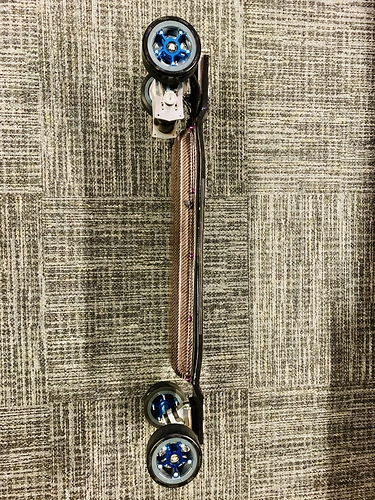 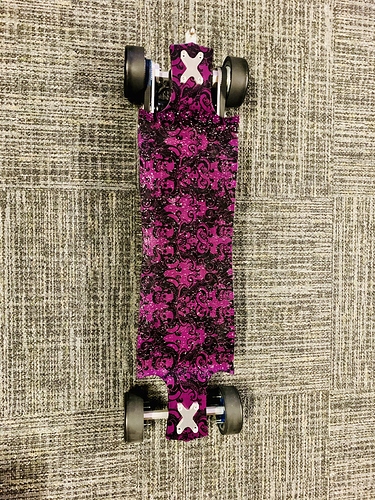 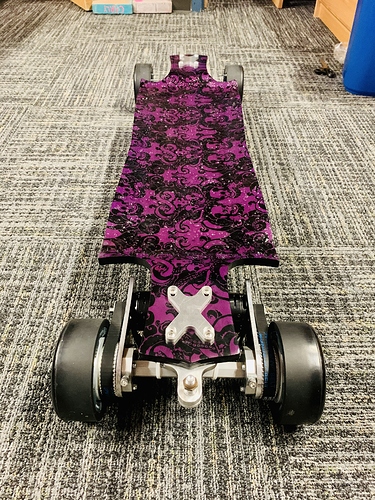 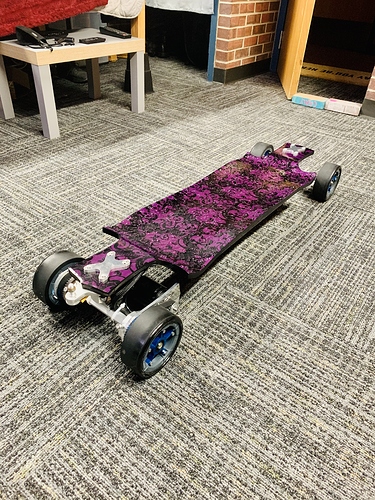 It’s finally finished! Working exactly the way I wanted and she looks beautiful. The belts and everything came in to run the urethane wheels, and I have belts on the way for that. Unfortunately, I didn’t realize when I bought the Psychotiller hubs that one of the drive hubs wasn’t threaded properly so I still have to buy a tap and die kit to finish that up. Also, I have a Bluetooth module set to arrive today which will take place of any indicators that I normally would dremel out the enclosure for.

Because I threaded the wires for the loop key under the truck, the enclosure is super clean and I only had to drill one hole in addition to the mounting holes. Makes it so sleek! I am absolutely in love. 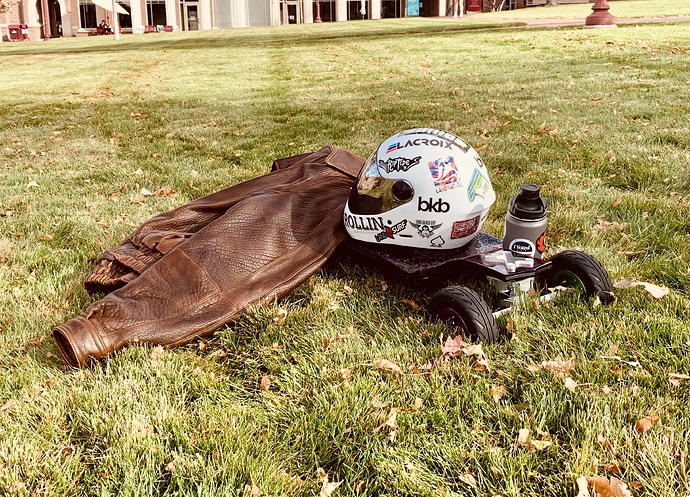 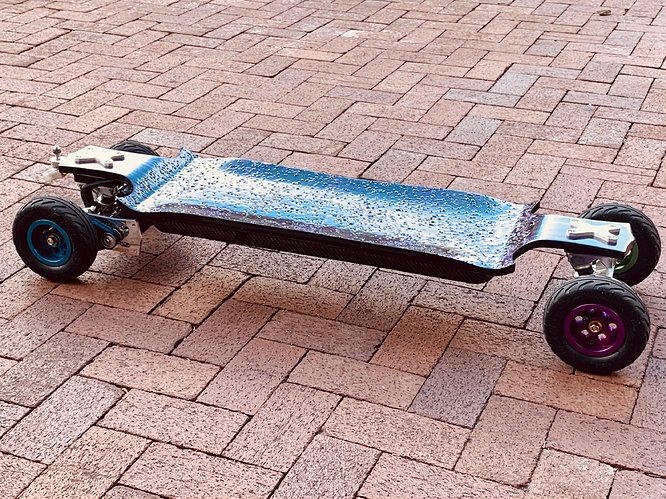 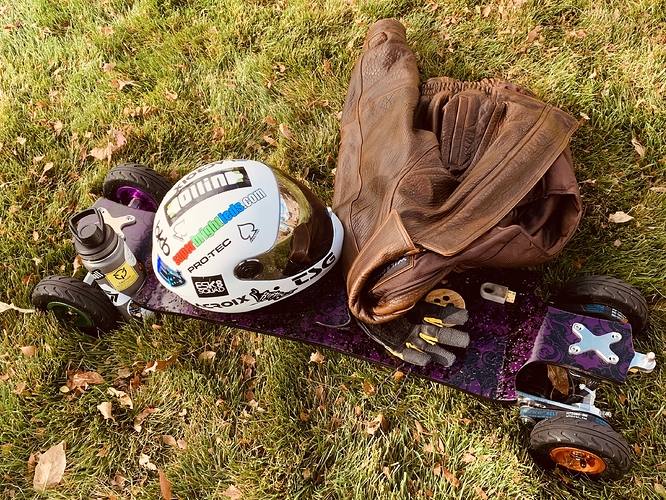 Absolutely loving this thing. Already got a flat tire though… I always knew it would be a money pit but I didn’t predict this problem in less than 72 hours after putting the pnuemies on lol.

Congratulations on getting this finished. Your patience is far greater than mine and you’ve been rewarded for your efforts.

What do you prefer wheel- wise with your setup. Will you be making any more changes?

@monkeysapien after running both the gummies and the sixshooters, I can pretty confidently say that I prefer the sixshooters for riding. They do make it much less efficient though (I’m getting 29.5wh/m right now), so I would probably use the gummies if I wanted a longer ride.

The only change I really see myself making at this point is upgrading the battery. Right now it’s a metro board 10s4p and I can feel the limitations…

The other possibility is that since this is meant to be run with the trailer that I made, I could place lead-acid batteries in the back and hook them up front for a stupid range. Ideally I would take this across the country, so I would want something around 100-200 miles of range anyways and I would need the pneumatics for that in order to not kill my legs.

By lead acid battery, do you mean like a car battery? Intrigued about this set up.

so I would want something around 100-200 miles of range anyways and I would need the pneumatics for that in order to not kill my legs.

For that kind of range I strongly suggest one of these too. Charge via your battery pack and ride forever

Hey did you get that hitch from @akhlut ? I tried a while back but that was right as he was drifting away and never got it. If you had another source that’d be great. And if not, oh well. Your board is gorgeous, by the way!