THIS BOARD IS FOR A FRIEND, NOT ME 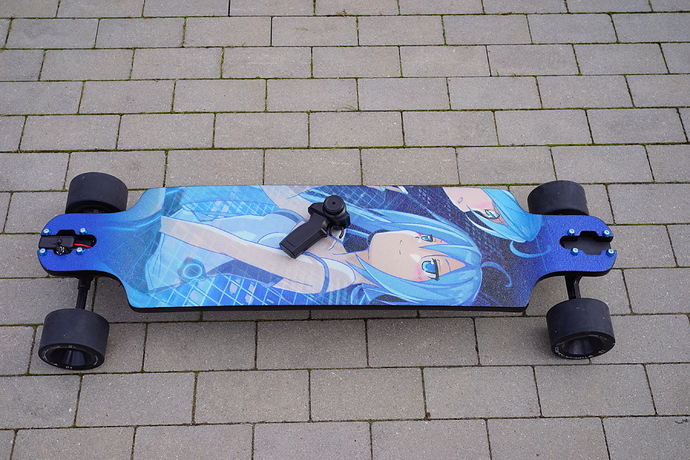 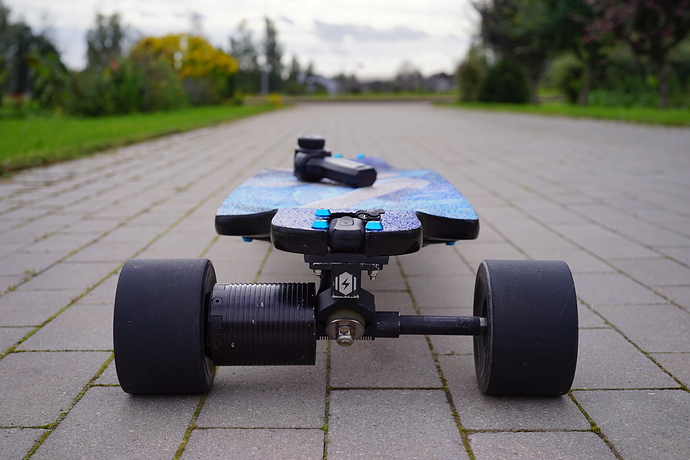 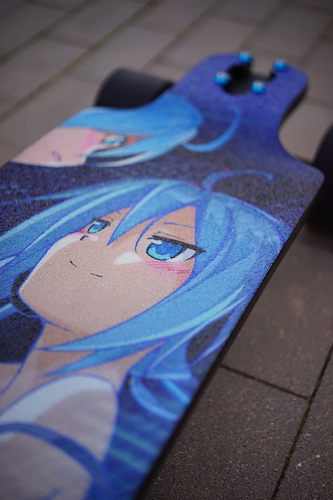 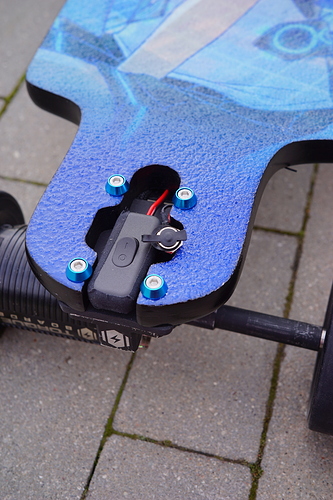 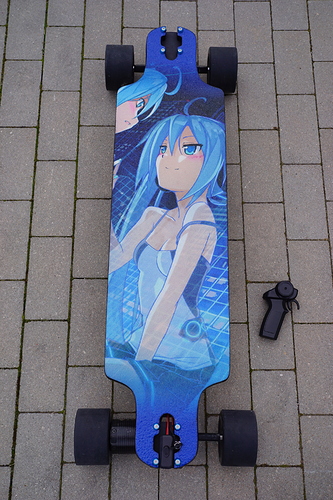 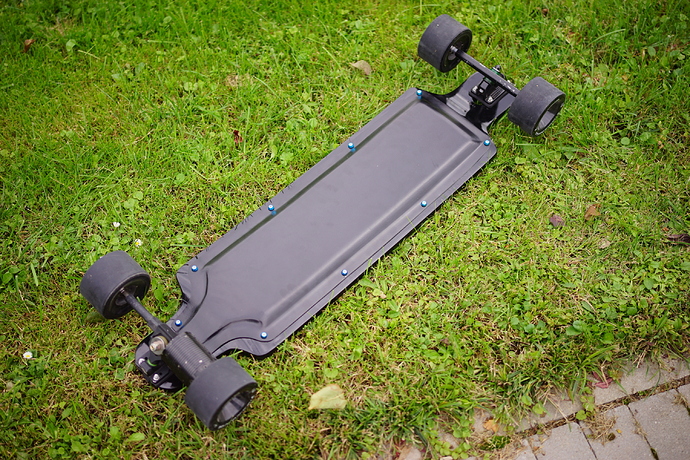 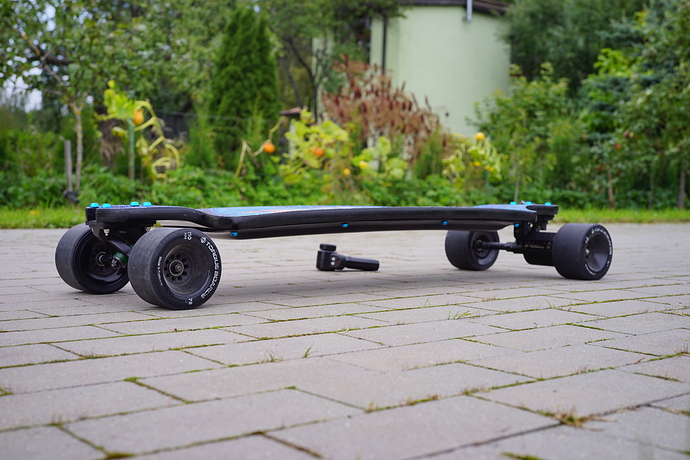 Single drive DD 2P? How is the torque?
Also we all know you’re a weeb in disguise, you probably built this as a body pillow

It’s not great. If you think about it, usually we have at least a 1:2 ratio for motors, but direct drive has 1:1. So with only one motor, it’s actually far worse than a normal single drive belt build. It is adequate enough to be useful (not as powerful as pushing, but almost). Biggest problem currently is that due to Vesc FW bugs, I have strict temperature throttling limits set, so quite fast the motor heats up, and then acceleration sucks a lot.

Luckily these limits don’t affect braking, and with regular current mode and a small value for direction change, it’s pretty good. I might experiment with powered braking instead of regen on belt setups as well going forward.

Also: as this is clearly a budget build, I can’t afford a metr module for gathering logs. All I can say is that I don’t recommend single direct drive. (Well, if you were building a push board with electric assistance, then this would be perfect actually) I’ll be stealing those off this board soon for myself, and then putting a belt drive instead.

Any wheelbite in the front with the narrow trucks?

Nope! Hummie decks have their truck holes quite far out. Hence why so many people use them with pneumatic wheels as well. I’m not running the trucks drop-through though. If I was, I would get slight wheel-bite. Use Surf Rodz if you want drop through – their hangers are further away from the mounting holes than calibers would be

Those skinned decks look so good! And I told you you’d use the truck for something, it’s nice that you found a build for it😃

You should call it “the simp board”

wait lol, HALF a TB direct drive?
haha made me feel a bit better XD

The deck turned out great though

I can’t afford a metr module for gathering logs

I must know the wh consumption

Can we be friends? I need a board

Sure! Just move to Latvia so that we can ride together

I would love to travel there one day… one day

and if not, he has to punish himself by rewarding us in some way, usually monetarily.

fin-domming through esk8. Nice board though I have a similar idea to get some bara art done of Tim and Damien and then having him skin it.

Not gonna lie, this build is beautiful. Probably wouldn’t dare to ride it in public tho

I like the look of a single direct drive

this is aweome, this looks BEAUtiful

Apparently my friend rode in the rain and the board no longer worked. (Also the motor now stutters at high temperatures again, thank you vesc FW! ) So I took it in for repairs & upgrading… 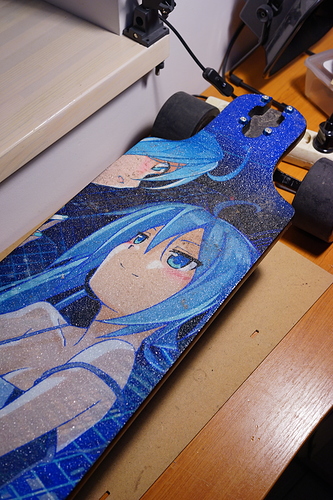 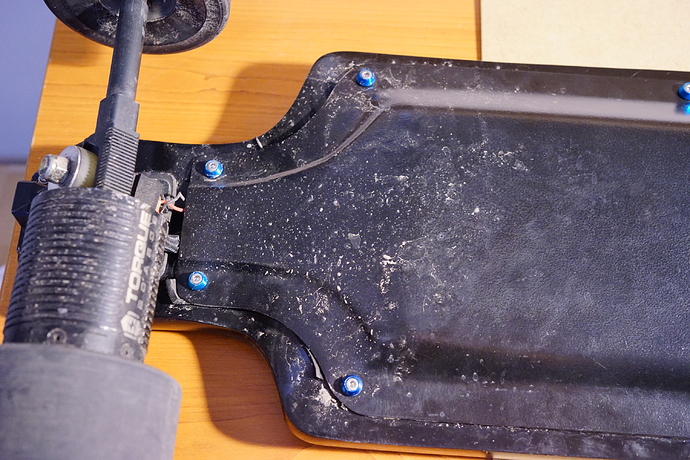 Apparently the charge port disconnected, so he had another friend solder it back and apparently it is now held on with a piece of plastic: 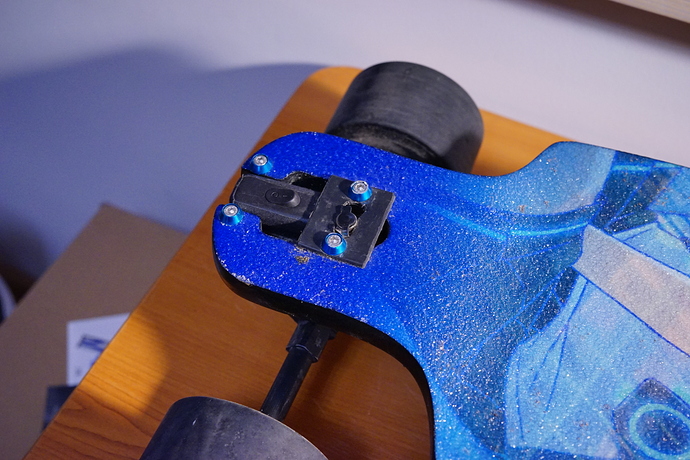 So, let’s open this puppy up and figure out what’s dead! 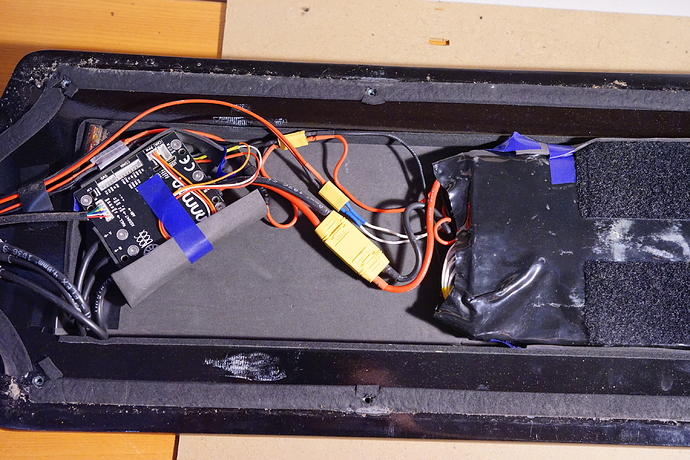 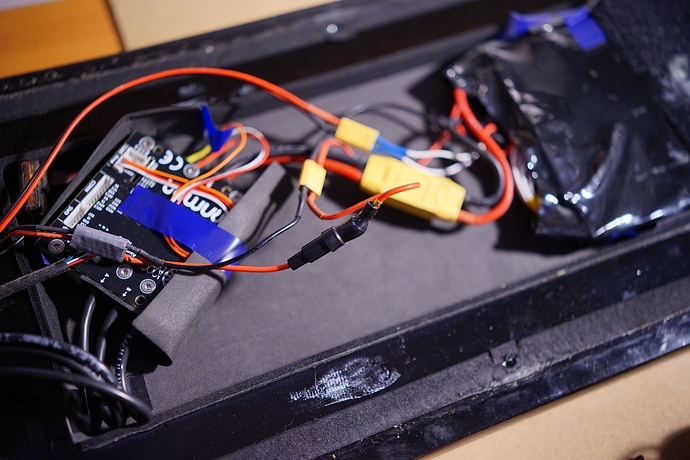 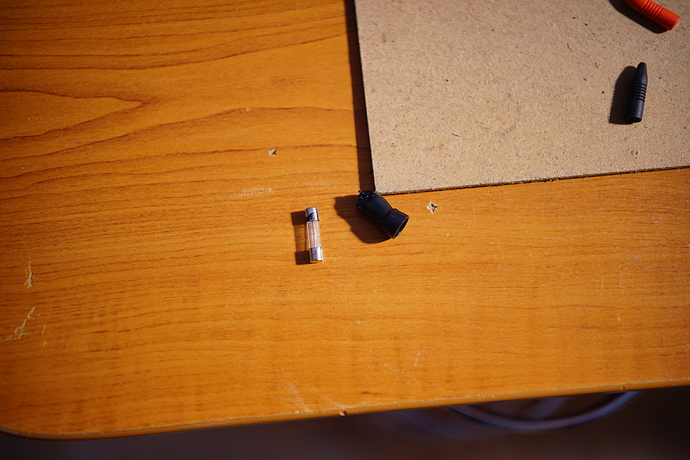 Can’t really read battery voltage; turning the battery on gives me 30V, but then it auto shuts off. Guess it’s just really empty…

But then, I noticed 1 corner of the battery’s velcro was wet. Only that piece, so if there was more water, then it already dried up and left no marks.

I need to change my charger’s plug to try and bring this battery back, but until I do that, does anyone have any ideas for what happened here? Did something short the chargeport and blow the fuse, and water had nothing to do with it? Or did the water somehow cause this? Vesc seems unharmed thankfully.

Update: charged up the battery, checked cell voltages before though, everything is good. I guess the 6.5A fuse was not a good match for the 4.5A charger I gave my friend. Or he actually shorted it somehow with water. Oh well, I’m just glad nothing is broken

Put paper with dots of marker in the enclosure, if the ink is messed up then there was water there even if it dried up cleanly 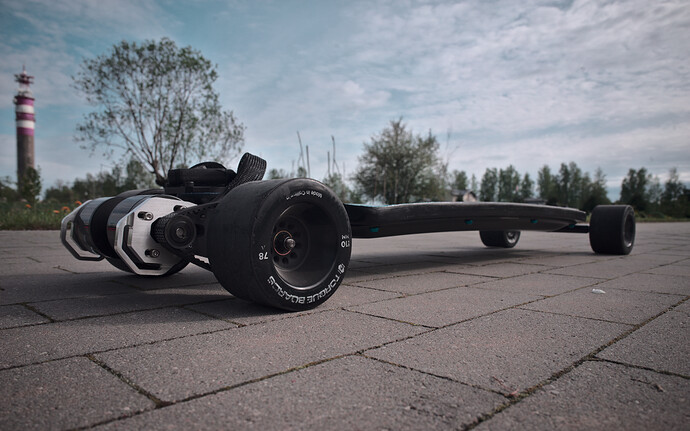 After continuing having direct drive issues (I think the vesc didn’t like actually running one motor at 80A. FW5.3 might have even solved a few issues in that regard), I decided to just swap it for the proper long-term drivetrain I had in mind for this board.

The mounts are awesome, really easy to assemble and hold on great. They even support idlers, which I was going to use, until I realized the idler is really close to the wheel pulley, and bends the belt quite a lot. I decided to forgo them, and use a shorter belt. No belt skip, and free-roll is excellent. The board is actually quite quiet in fact 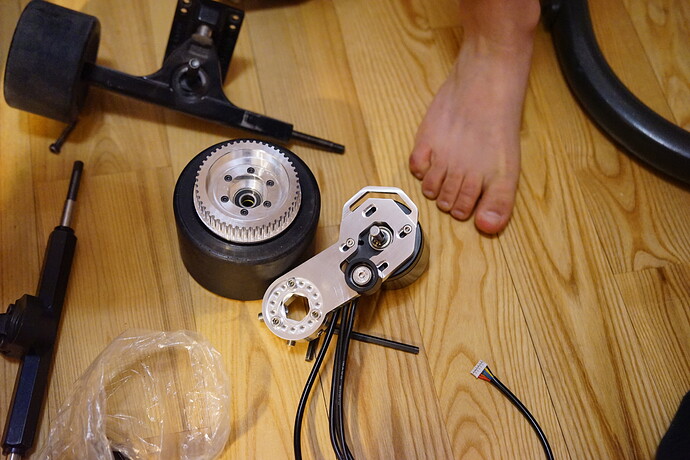 I mounted the trucks drop-through, and ran into an interesting issue – truck bite! Also motor mount bite. I used sand-paper around a crown drill to sand wheel-wells in the deck, and then repainted them black and clear coat. 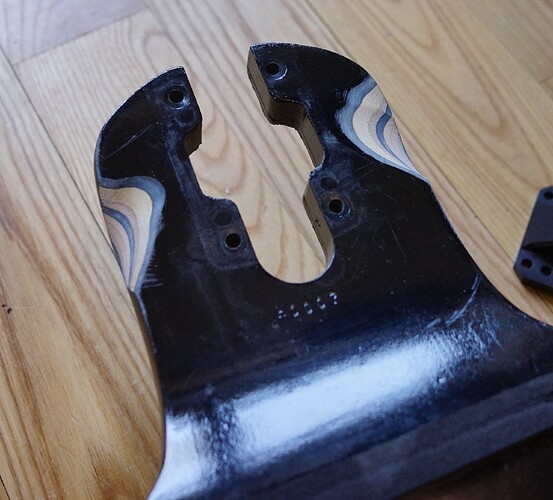 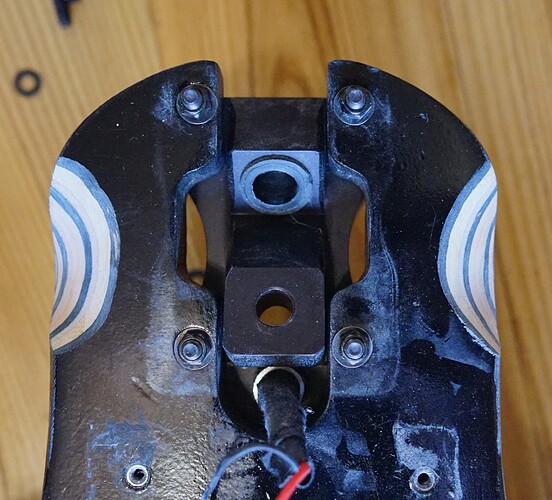 To solve the mount-bite issue, I not only made the wheel-wells extend to the sides of the deck, but I also used a grinder to grind the mount clamps smaller 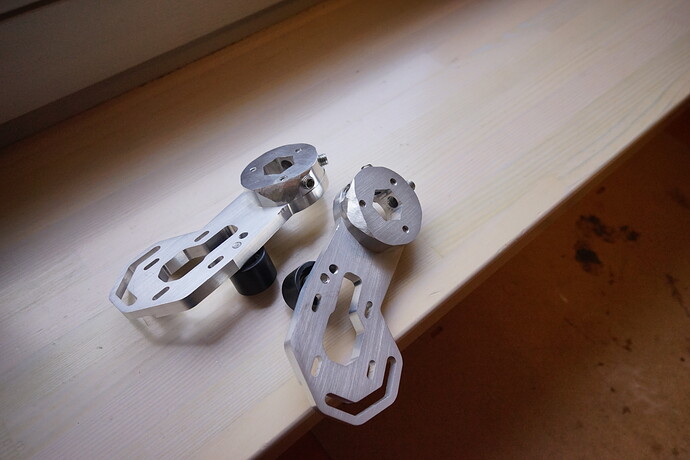 Since the trucks are now drop-through, I needed to recreate the charge-port holder using a bit of sheet metal and my dremel. 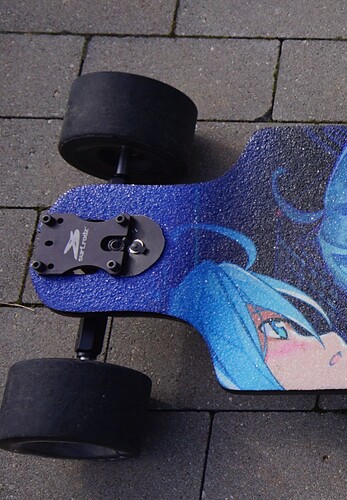 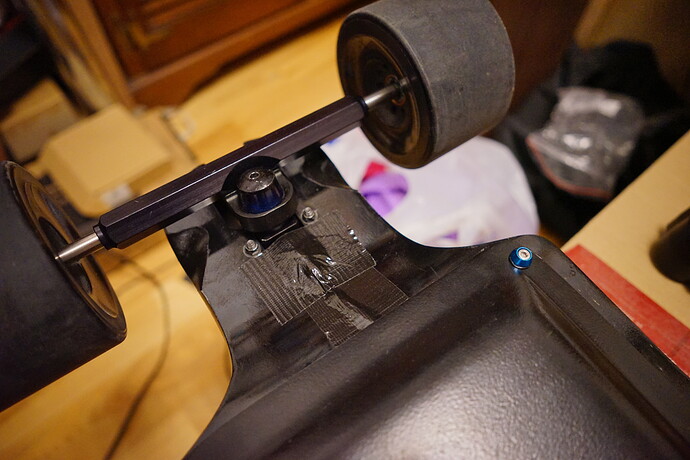 I also received some Cheap Focers from @doomy for Secret Easter. Free ESCs means less money owed to me by my friend, and vesc 6 HW is awesome. Thank you @shaman for helping me set them up. One of my focers had an issue with flex, but the other 3 seem to be working fine. I soldered 4mm bullets, XT-60s, added an additional capacitor to the on/off pins, and conformal coated them before mounting them to a heat-sink. Tapping holes and cutting aluminum was a first for me, so it’s cool to learn new things

(I don’t think I’ll ever be doing that again though, as long as I have my job 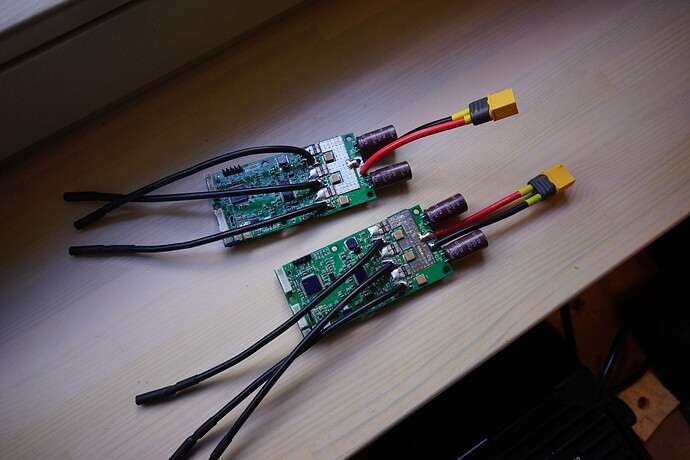 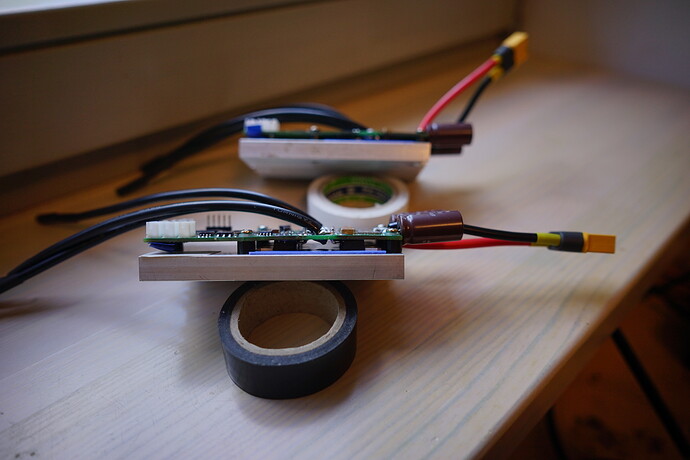 Luckily my new Pinecil soldering iron made things a lot easier. I’m not too sure I trust its power, but for this it was perfect. I digress;

I also replaced the fuse holder with a beefier one. Turns out the small one I was using before just melts at 5A charge current 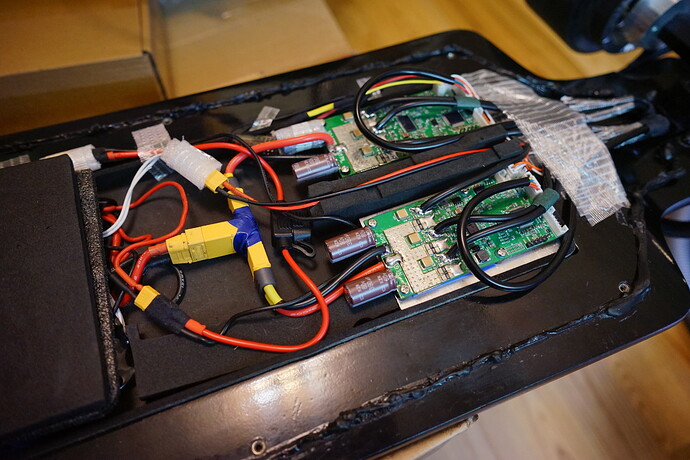 Here you can see everything mounted inside the enclosure. I used foam to hold the ESCs in place. Crimped JST connectors for CAN (I hate crimping, urghhhh), added foam around the small connectors to prevent them from rattling inside the enclosure. Used fiberglass tape to tape wires down. If you look closely, you’ll notice that the charge port wires actually go OUTSIDE the hummie cutout. There’s obviously space there between the deck and enclosure, so it makes routing wires really easy 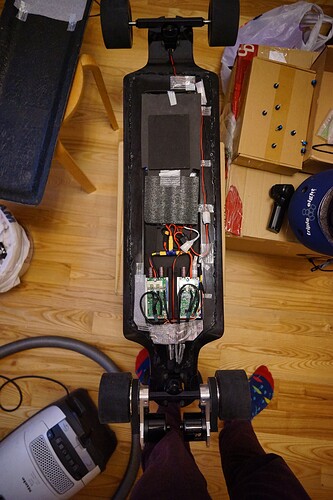 Finally I added braided sleeving and heat-shrink to the motor wires to make it look professional af, velcrod the stupid on/off switch to the back truck, and closed it up with butyl tape

(Note that due to the wire channel in the enclosure, the board is not water-resistant. But it’s probably good enough for the occasional puddle imo. 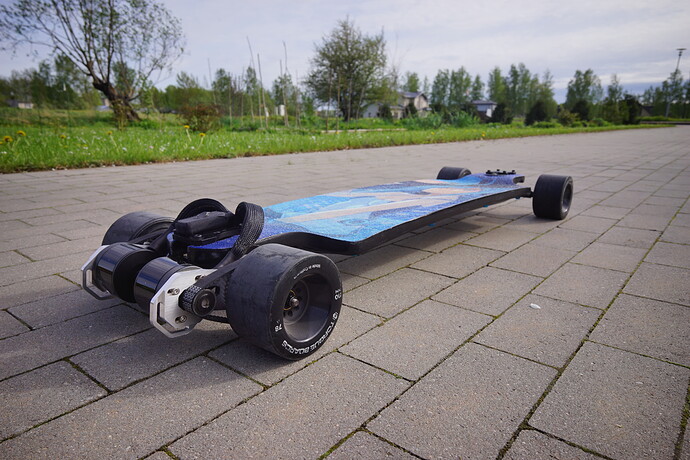 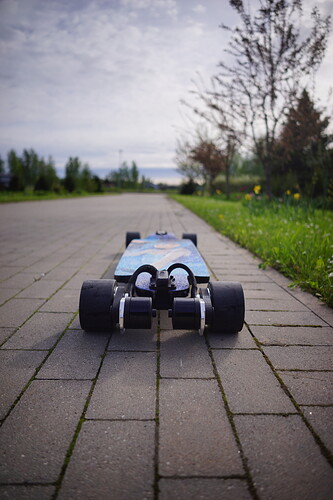 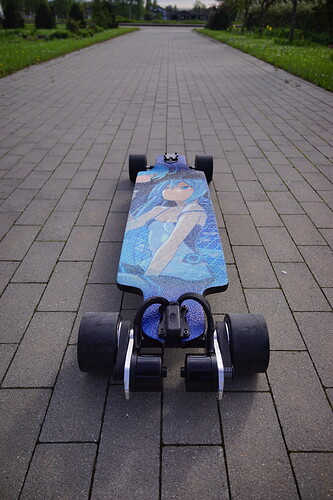 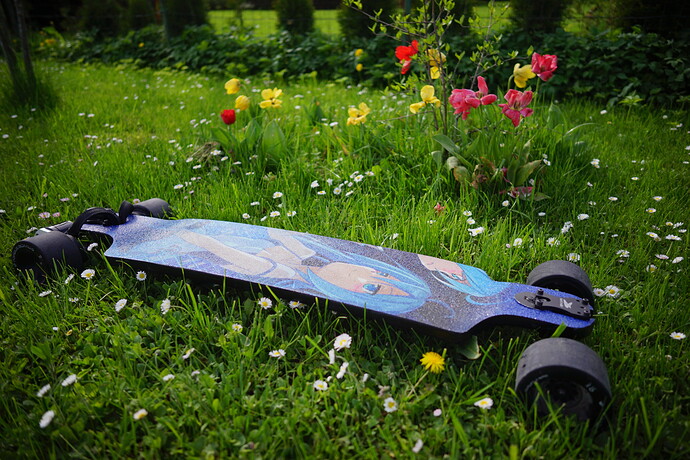 Well, it BEGS to be carved. It turns way too well. However, urethane wheels do and WILL lose grip, and I actually fell once while test-riding the board and carving.

I actually feel scared riding this thing because it’s so easy to turn. I’ll experiment with tightening the trucks way down to see if that helps, but I’d love to get some input on other people with the hummie x surf rodz tkp combo. Maybe harder bushings than the default surf rodz ones?

At the moment I have the board limited to 70% max duty cycle and only ±30A for the motors because I fear that my friend will just kill himself instantly otherwise. I did ride it at 95% duty cycle with super loose trucks, and although it’s rideable, the wobbles are real if you don’t keep your weight forward lol.