Any tips for the photogrammetry part of the process? I’ve heard even lighting is the most important. Picking up the contours on an almost flat surface seems the challenging part

With what material did you fit them together?

I epoxied them together. I did that once on another segmented 3d printed enclosure and it held up well so far.

It’s my first time doing any 3d modeling work, so it’s far from great. The motivation was the clearance, since the magnum wheels and the drop of the LY switchblade don’t offer much space to work with.

image3262×964 709 KB
Something like this was already enough to make a pretty good model. I used Agisoft Metashape trial edition, it is very easy. Even with just 2-3 pictures it can generate a decent model.

Funny story: Every time I generated a model, it was slightly curved / crooked. Like the board model had a horizontal twist to it. Hence why I tried retaking photos and redoing the process many times. Only later I realized that the algorithm was doing it’s job perfectly, and that the ACTUAL deck had this twist.

Only later I realized that the algorithm was doing it’s job perfectly, and that the ACTUAL deck had this twist.

haha, impressive that the software is so capable. Will give the Agisoft one a go then

That’s golden into there, thanks!

What type of files are output by the software? And how do you determine the size to be 1:1?

Does a regular smartphone camera works or you’re using something fancy like iPad pro’s LIDAR?

I did this process on this build

Yo. My extended spring break has driven me to push forward with this project in a big way, and I’ve been working on it more consistently since then. Chances are this will be a long, albeit high quality read, so settle in friends. If you’re interested more in the electronics of this build, check out my FrankenWheel thread for how I put it all together. This DIY build is kind of a re-construction / upgrade of the legend of a time-sink that was the FrankenWheel project. My wheels got turni…

It took a long time. The parts I had trouble with were mostly the parts that reflected the most. Aka blown highlights in the photos. If you get nice even lighting, that will help a lot

What type of files are output by the software?

OBJ, can be used by almost anything.

And how do you determine the size to be 1:1?

That part was pretty hard for me. I messed up by 0.5cm to be honest. I measured the deck width IRL and then adjusted the world scale in blender so that the same distance measured with the blender measuring tool would be about the same. Probably this can be done better and with some sort of markers on the board placed beforehand at a specific distance.

Does a regular smartphone camera works or you’re using something fancy like iPad pro’s LIDAR?

damn, I completely forgot that my initial motivation was to actually use LIDAR for this! But it didn’t work as well on the first few tries, the model was bad. So I just used my phone and took some shots of the deck and did the photogammetry instead. A friend also did the same using his phone for his deck. I think he wrapped his deck in some black shrinktape, that worked for him. For my deck I didnt have any trouble generating the model, maybe because of the artwork giving the algorithm enough of reference points. If your deck is reflective or very simple you can try covering it in stickers or dark duct tape lines.

this tutorial is pretty simple and the settings worked for me. Beware, some GPUs can’t run the algorithm properly, like some laptops or old GPUs. My 970GTX did it just fine.

This article describes the basic Workflow for building 3D model of an object. We also recommend to think through the process of photography. You can found more detailed recommendations in the section - Image Capture Tips. The workflow described i...

That part was pretty hard for me. I messed up by 0.5cm to be honest. I measured the deck width IRL and then adjusted the world scale in blender so that the same distance measured with the blender measuring tool would be about the same

This is exactly what I did too

Alrighty lads, I’ve finally uploaded my enclosure that I used to produce the @Eskdiy kit build

Let me know if you have any questions 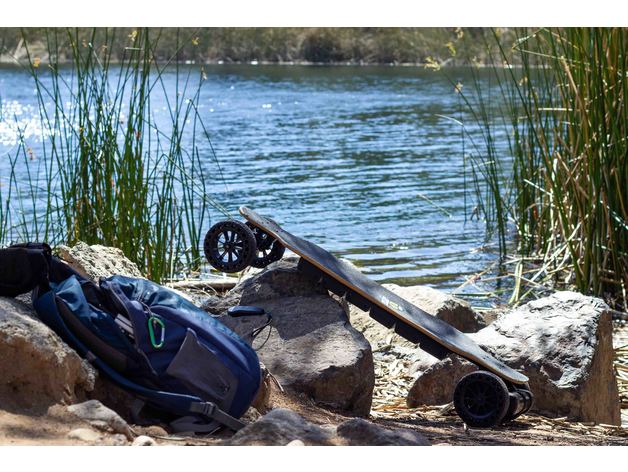 Just saw this on facefuck 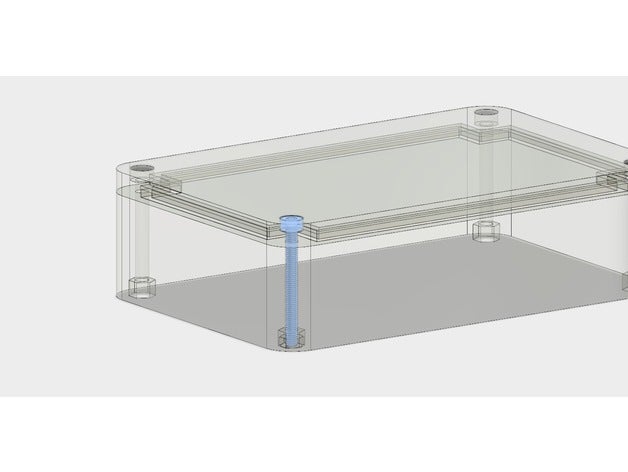 I needed a waterproof box for a solar charger I was designing. I decided to make the design adjustable to allow the dimensions to be changed. I updated the design as there was an error with one of the dimensions, which stopped it from scaling... 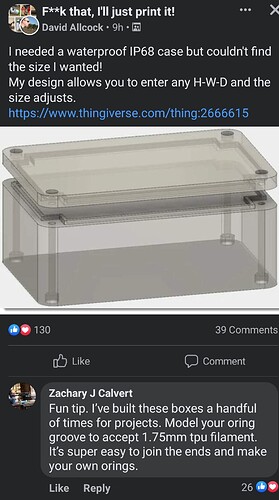 Wow that guy with the TPU filament shout is genius. I’m totally stealing that.

What’s fully is I had this idea then forgot all about it.

Anyone 3-D printing in NYC I need a battery enclosure and ESC.

I’m no expert but I’d recommend adding a large fillet at the crease where the vertical walls of the enclosure transition to the flat wings. That should significantly increase the strength of that section.

I just added an Haero Bro enclosure I modified for a Stormcore/Radium combo to thingiverse.
https://www.thingiverse.com/thing:5335531 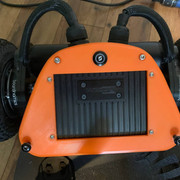 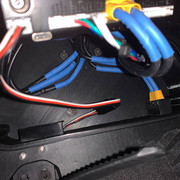 Anyone ever printed an enclosure with incorporated air cooling routing/vents of any kind?

Apart from making custom cnc cooling plate that is glued in enclosure no. If you have cooling plate there is no need for additional cooling really. Your motors will get hotter way faster than ESC itself. And even if esc overheats, just add more cooling fins (surface area) and that should do the trick.