PSA: Be super careful with TorqueBoards Direct Drives, almost got very injured again with them

Just FYI, everyone should really aggressively check their axles/generally their whole TorqueBoards Direct Drive units that they are not loose in any way, it seems my 75KV dd’s axle just fell off the hanger.

This is the 2nd time I almost got very injured from @torqueboards Direct Drives. First was in October on some 90 KV’s that I think have a magnet issue and threw me off the board, which was that board’s inaugural ride, luckily at a low speed so I was able to run it off. I sent those back to him to diagnose on November 11th or 12th, but he still has not even looked at them.

Now I was just going in excess of 30mph and when I was about 1000 feet from where we’re staying on a lil trip, I heard a noise and stopped, inspected the board and saw the wheel/motor was about to fall off. If this had happened 2 minutes prior when I was going around some turns, I’d likely be in the emergency room at the very least.

I never make a fuss publicly about things but this concerns safety, and I am sick and tired of these DD’s almost killing me. I am done with his DD’s for now. Use extra caution with his DD’s.

honestly, what a f’ing joke 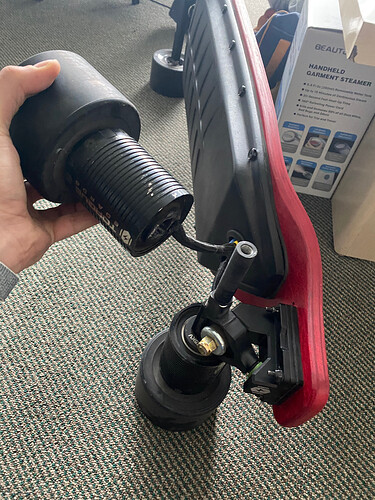 why would I take them apart? they should come correctly assembled

unless it’s a known issue that his axels are falling off his hangers ?

Most stuff comes pre-assembled, but not with loctite.

I remember mine beinga bit wet in there, need to clean off the threads, apply loctite, torque down the axles, let it sit for a day, then ride.

then he should make it a point to say that, it mentions nowhere to take them apart and add loctite

and if that is the case, why even send them assembled?

It is DIY. Not an excuse though you’re right, and glad you’re okay it seems.

and if that is the case, why even send them assembled?

Things don’t always fit and function correctly… As part of the QC I’m assuming they get put together to make sure the fits all good, and probably save on packing materials so a million parts aren’t banging around in the box.

In general, skateboarding, longboarding, car driving, helicopter flying, electric skateboarding, and paragliding are all inherently dangerous activities no matter which equipment you use, there is always risk of serious injury or death.

If I could suggest the wicking “Loctite 290” — I love how you can apply it (before or) AFTER assembly if desired, and it’s a medium-strength green variety so it can also be disassembled without torches and power tools later if needed.

How would you apply it after assembly?

I hold a smooth toothpick over a trash can, and rub the nozzle on it to “wet” the toothpick with Loctite 290, then move over to the part and lightly stick the point of the toothpick in the crack, like where the bolt meets the nut, et cetera, and then put a tiny bit of Loctite on the middle of the toothpick. It runs down the wetted toothpick right into the crack and wicks into the threads.

Then remove the toothpick and don’t touch it for 30 hours.

I don’t disagree that yes it is DIY, great. They’re not DIY r/c helicopters or something that likely won’t kill you.

If you know this is a possibility, make the end-user extremely aware, very clearly.

I’ll give that a shot

Sorry to hear. Glad your okay.

I’d recommend double checking them from time to time. Just to make sure they aren’t loose. It’s usually unlikely but can happen.

We usually add red loctite. I’ll check back and make sure they are applying it correctly.

It’d be appreciated if the fact they may fall apart due to the end-user needing to re-apply poorly applied loctite was made aware to the end-user when you open the box. Maybe that is asking too much though

I buy a decent amount of products from you, I am hugely supportive of what you do, but I don’t want to die on one of your products from not my own lack of control of the board, such as via your poor quality control.

disagree on both fronts

I guess you should learn to fall better if maintenance on something that could potentially “make you” lose control isn’t something you enjoy.