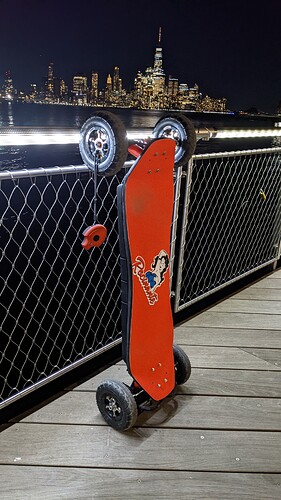 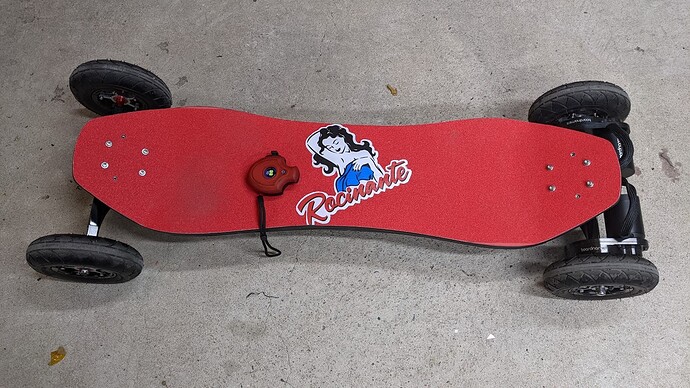 I need a practical board with long-range that isn’t massive like the Cyboard. But it can’t be normal either because god forbid my board isn’t the coolest one at the group ride.

I named this thing “Rocinante” after the ship captained by James Holden in the show The Expanse. 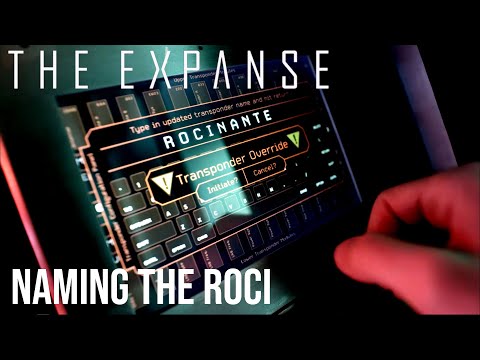 The initial inspiration was @DerelictRobot calling me “Holden” at Carve PDX because, apparently, I look very much like him. 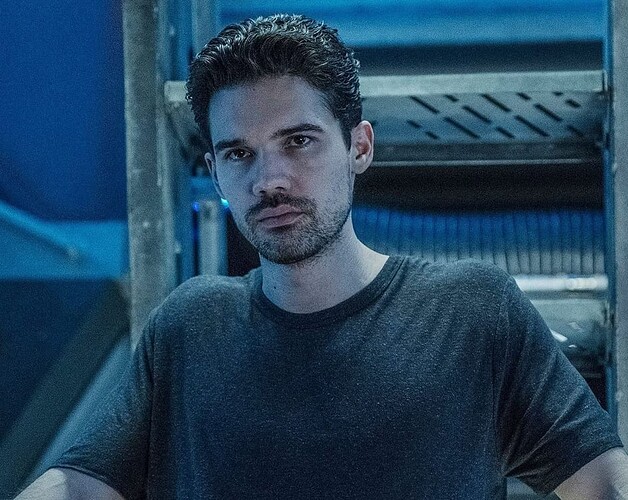 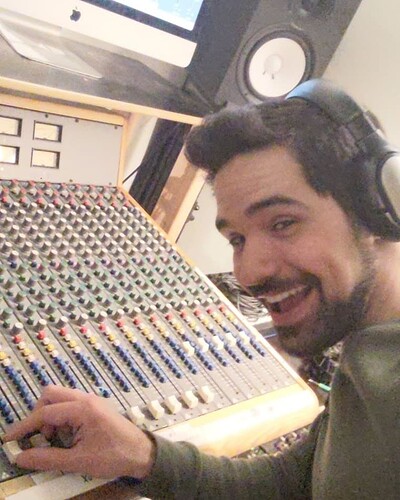 This build started with me blatantly following @Brently around. First, he got a Bro deck from @ApexBoards , so I got a blemished Bro from @Haeroboards directly for a steep discount. Then we placed an order for two DS Bro-closures from @eBoosted and split the shipping.

One afternoon Brent comes over and we’re talking shop and build plans. One thing leads to another and we end up deciding to both try out our new unreleased Ę̴̢̘͚̟͈̤̥̹̠̹̘̫̩͕͙͕͈̦̰͓̤̭̭̫̯͎͈̙̦̈́̊̾̎͊̉̾̊̋͊́̈͐̒͝Ş̸̛̹̣̪̘̠̝͍̖̜̲̝͙͇͍̝̜̺͔̱̜̯̭̣̪̝͚̰͚͎̪͙͎̰̻͙͎̺̫̹̗̮͒̆̀̂̀͆͌̆̍̈̈́̌̏̓͊̅͌̀̉̈̂̅͐̃̃͋̓̈́͗̌̏̆̀͒̿̾̓͜͝Ç̵̡̧̡̛͖̥͚̜̟͕̗̟̗̙̞̳̩̥͕̯̣̗͙̬͕͇̪̮̞̪̪̀̽͛̌̿͗̉͂̆̚͘ͅ . 20s is a risk we decided to take together and I built us both a 20s4p P42A pack with a 20s ANT BMS.

The rest of the build is pretty unremarkable, Trampa precision trucks. I wish I didn’t have to buy from them but I am addicted to the soft barrels from Kaly NYC. Vantablack has the same truck and barrel setup and its a crowd favorite so I didn’t fix what wasn’t broken.

An issue I had with this build is that the enclosure is thiccc and hangs way lower than the hangars. I bought a set of carbon fiber 1cm risers from Brent, and now the enclosure and hangar are at about the same height off the ground. I may add a little more in the future but it’s more than rideable as is.

Getting a 20s pack to fit in an enclosure made for 12s was a challenge, but I kinda enjoy the battery jenga. What I ended up doing is 5x 4s ‘modules’. 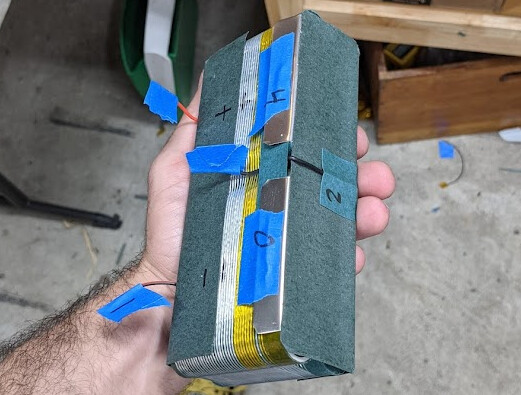 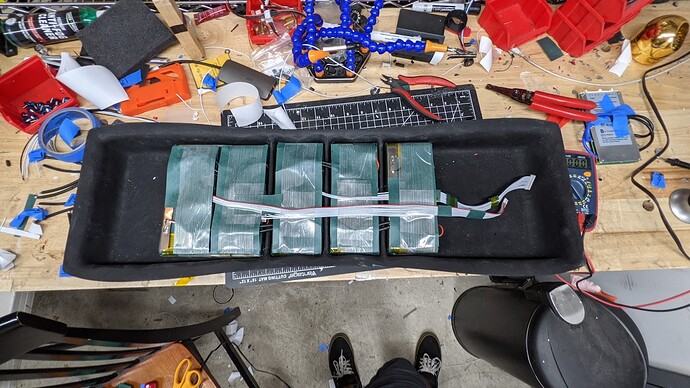 Doing it like this made the pack a lot faster to build. I could make 10x identical 4s modules for me and Brent’s build. His is shifted back in the enclosure to accommodate an ESC in the front one day for AWD. I like to split my battery builds into as many repeatable steps as possible. 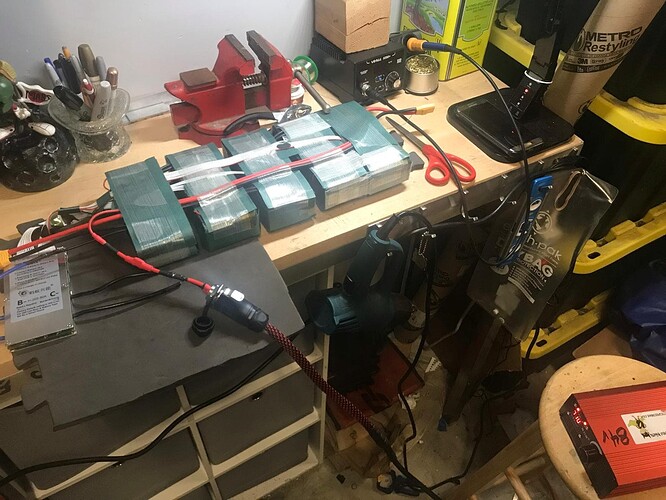 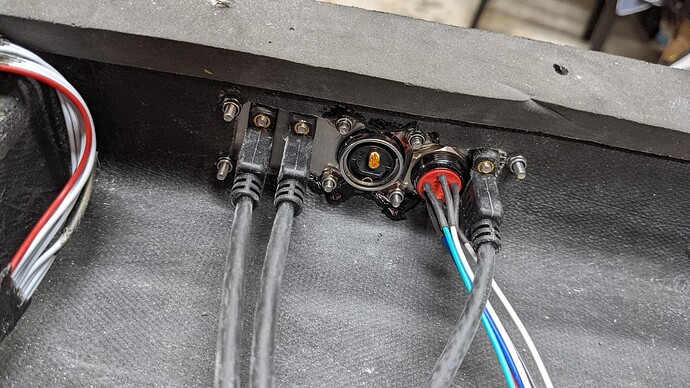 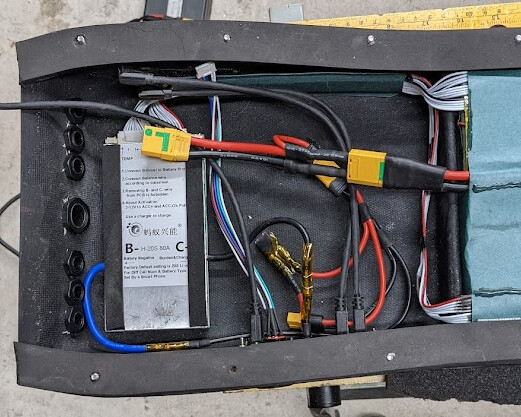 I ordered the nose art from the Rocinante in the form of a sticker that bearly fit on the deck. I then traced it on red grip tape and did this 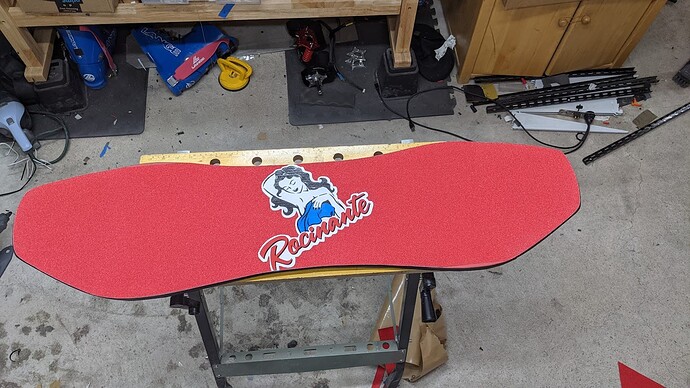 The BN-AT from @Boardnamics is my go-to drive train. I went with a 5.2 ratio with 140kv motors. The calc says Ill get between 40-45mph top speed on this build.

The wheels are from Trampa, only because I can throw a spacer in them to widen the wheels an ungodly amount in the future.

The tires are basically kenda 8in but from aliexpress, got them from a guy in DC.

Whats left to do

There is an OSRR receiver in here, so as soon as I get my remote I can start using it. The puck I’ve had for many crashes now is starting to give up, so I havent ridden this at mode 3 yet. Too scary. 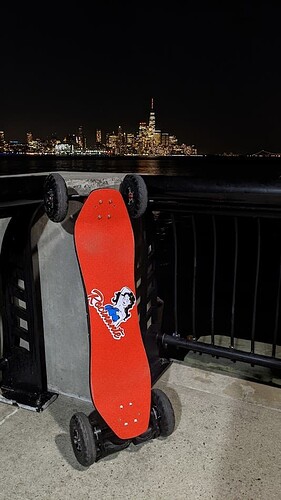 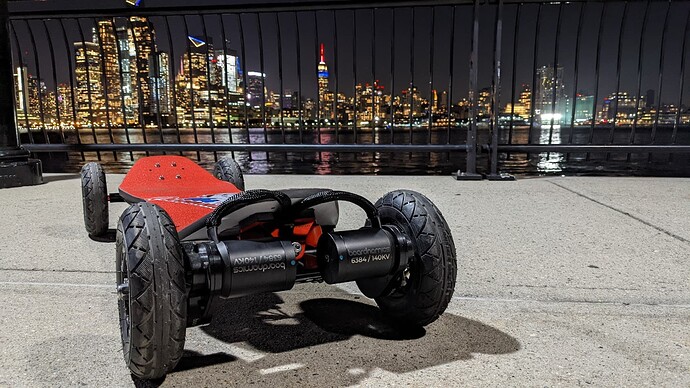 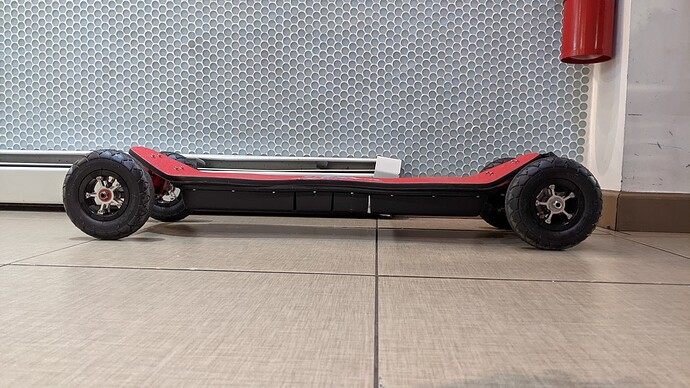 Very pretty, I like the idea of the USB and charge panel, looks really sleek and finished off 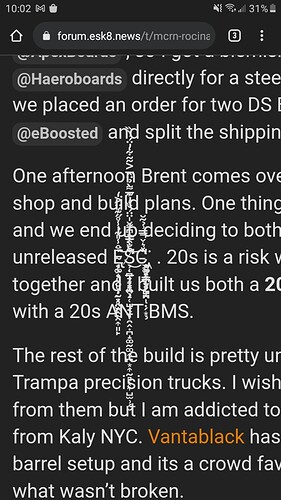 Jackson has a ghost in his thread

Holy shit I’m glad I’m not the only one.

Not high enough for this shit.

Great build @jack.luis. How are you handling PD for the USB-C? Love the charge panel.

Holy shit I’m glad I’m not the only one

The matrix is showing bruh lol

It’s a 96v to 12v buck connected to a car charger adapter I got off Amazon. Then just panel mounts for USB c

After the last day of one hellish of a semester I came home to this [IMG_8769] Thanks @eBoosted So I finally managed to start doing my mountain board after wanting one for a long time, my Hummie build with AT tires simply isn’t build for what I want to do with. The goal is a worry free board in every way imaginable, it’s starting to rain? No problem. Deep loose sand on the way? Bring it on. Day long ridding thought dirt roads? The day ended before the battery All these specs are tentative,…

We gonna talk about whatever old god you’re summoning in the thread, Holden?

I promised the old gods I wouldn’t expose their plans

I bullied him into joining the forum haha

Not in here kids

As long as you host it! Your pics are epic and I’m so jealous of your riding location

Thanks man, the picture makes it pretty, and not saying it isn’t, but it’s a bit sad that there are barely any forests around, only some small patches now and then where it’s required by law, the rest is just sugar cane crops, you can go in any direction for maybe 100’s of kilometers in any direction and it’s all you will find in 80 to 90% of the terrain, but sometimes you came up in some gems Not related to the board but just a sneak peak at the region, for the past of almost two years since e…

I don’t have any qualm with Fred lol

Anyways it is a cool build, I like the red, and obviously the Haero deck

Soooon you shall have the uh

Idk what we call the new ones, adapter plate? Saucer plate?