The Mark I - A Stark Industries Electric Skateboard

Using Google’s conversational AI called dialogflow. I didn’t think it would be possible to make an esk8 I could talk to! I never imagined this at the start. Not quite done yet but close enough for me to share this clip…

This Is going to be an awesome build! subbed…

Ive been planning all sorts of battery layouts. The shape of the haero deck is awkward. Considered combinations with enclosure sections wider near trucks to maximize the space. That didnt help.

Current plan: Yes I have two models for the deck. One I found online, flat one I made myself with picture tracing. Haero wont share the model with me in case someone uses it to copy the deck (understandable). Will have to compare some partial 3d prints/outlines with my deck later. If my enclosure was any wider then it would stick out in the middle. Took a lot of time to decide on a design where it wouldnt stick out 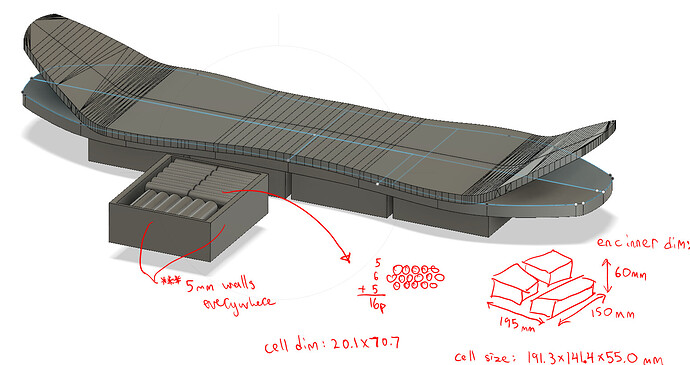 I have a 16S board and swapped out a 12S while I rebuilt the 16s I didn’t notice much change in power/speed/torque.
Thermals were slightly better with 16S. One of my 6384 190kv died running on 16s with at wheels. Moved to 140kv handles the higher voltage better.

Is the davega open source?

This is exactly what I was hoping to hear/not hear! I will be sticking with 12s for sure then. Thank you so much for sharing this information! This means I will be able to start building my battery earlier. Will buy 200 cells soon. 12s16p = 192cells.

I believe the latest OS is not. Better to ask that here: DAVEGA X Updates 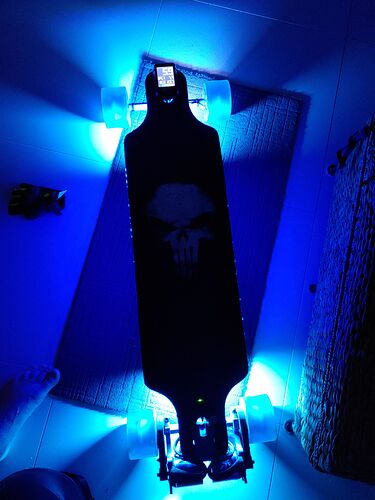 Yes and no. There’s an old open source version: 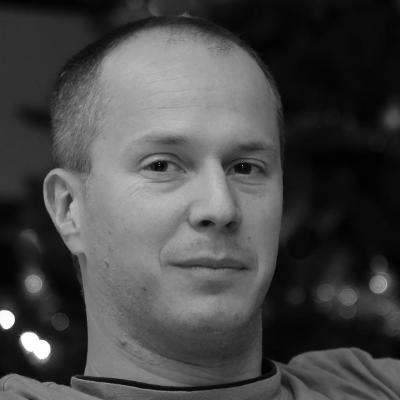 Firmware for DAVEga, a device for electronic skateboards that displays data read from VESC based speed controllers.

@charclo is giving it some love in his fork: 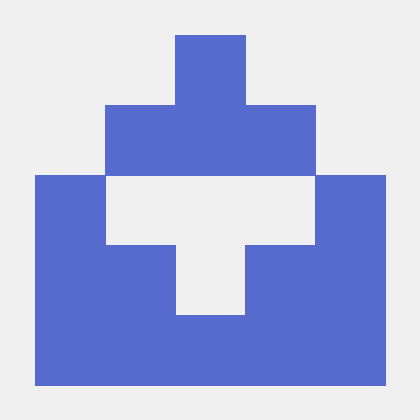 Firmware for Roxie, a device for electric vehicles that displays data read from VESC based speed controllers.

The new DAVEGA X is not open source.

What do you think about this mechanism/mount to attach the enclosures to each other and the deck? Its 5mm thick. I want it to be thick enough to be strong to support the enclosure but also thin enough that the enclosure can flex a little. Ill be sealing all the edges with silicone which really makes the enclosure stick to the deck so I can make mounting part not as strong. 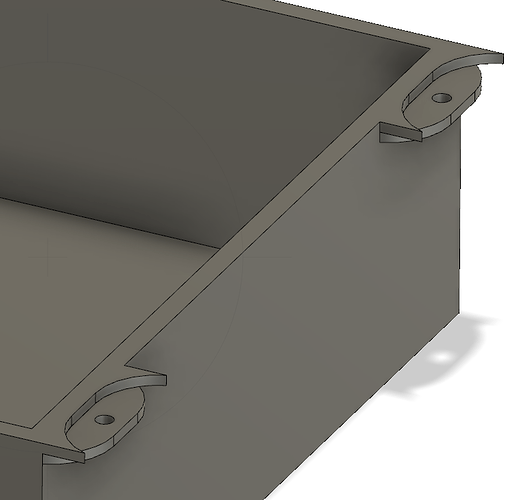 I have a feeling that it would break off over time, especially depending on what filament you print with

Really? Why? For my old board I 3d printed hubs in abs 100% infill and after a whole winter there were no signs of wear. That had to support my weight while this just supports the battery. I’m going to print with PETG for this enclosure though. 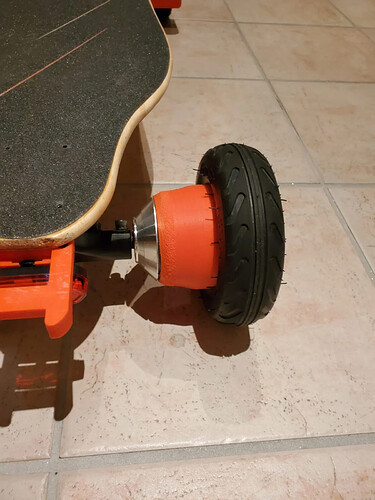 Well to be fair, it might survive, but there is a lot of vibration in battery enclosures, and having one screw to go through two enclosures is too much risk for me to personally take.

The Haero will flex a bit, and you will likely scrape on some things too, and I wouldnt want to risk having two enclosure segments come off if one screw comes out.

I don’t think the hubs is a good comparison, saying it has to support your weight is kind of true, technically it was split across four wheels, two of which had the hubs. Additionally, cylinders are stronger than those flaps that you’ve got on the enclosure.

One final point, is that you’ll need to think about layers and where they might delaminate in those areas as well. My first board had 3d printed enclosures and the battery one delaminated a few times.

Batteries are heavy and dangerous if they fall out and short, I’d recommend reconsidering how they mount

What would you suggest? I can make the two flaps span the entire width instead of just at the two ends? Make each flap thicker? I was also thinking I can add a 3rd flap in between but just to connect the two pieces not the deck, meaning two deck mounts at the ends and one linker in the middle kind of like a link between train cars. I can really beef it up but I was thinking this might make it too rigid so it wont be able to flex with the board?

Well if I was making it myself this way, I’d probably make it so that each of the enclosure segments has four screws holding it onto the deck.

Hmmm I mean it might still be fine. You could always test it in some fashion and see how strong the silicon is. Also the battery you’re planning is massive, so you really don’t want to take chances haha

Just to clarify, you mean 4 screw on each side, so 8 for each segment, and 32 for all 4 boxes. As opposed to my original plan of 4 m5 with 1 at each corner roughly.

Oh no not quite, I mean four for each enclosure segment, as in two on front and two on back

So 4 for each segment, but so that they aren’t hold on two segments at once, 16 screws total

I might go with your plan or your plan modded (if not enough room length wise), but I might first test if mine is strong enough. I’m learning towards yours because most enclosures like for a 12s8p use 16 screws. Mine is twice the weight roughly so I guess that wont be enough. Or could I just make the flaps twice as thick and use m6 instead of m5? Im hesitant to put a lot of holes close together. I don’t even want to drill into my deck at all lol 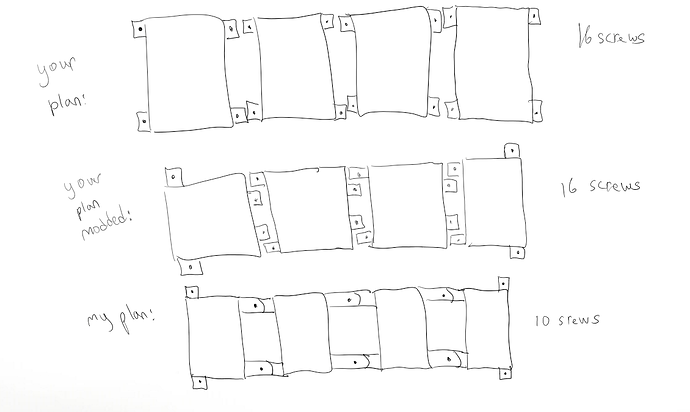 current plan for all accessories and electronics: going to open up ubox uni1 remote and 3d print a bigger one to fit the remote for the relay. 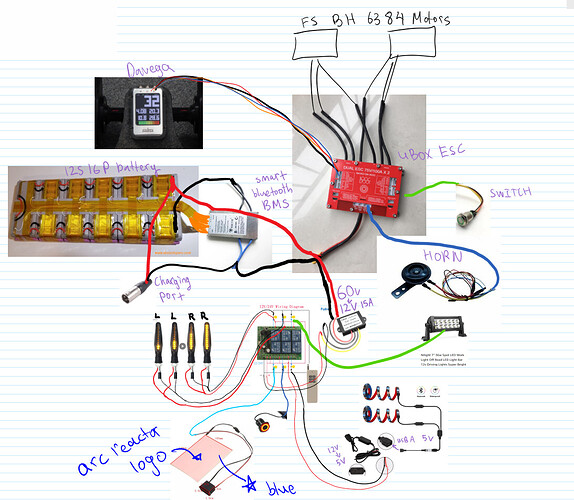 Check out Seb’s esk8 LED controller, its open source and easy to build it uses 3 x ws8218b LED strips.
I has a build in accelerometer for Carving and Braking changes.
https://github.com/sebdelsol/esk8-ledstrip

Seb has done a lot of work and even done a phone app to control it.
I have built one and using it in an upcoming build
It may give you some ideas…