Hey guys I’m new to this forum and I was browsing through the Web today and I found something very interesting/Sketchy. This is the link to what it claims “Motor controller aka focbox”. I’m just wondering if anyone bout from aliexpress or have any thought on this particular deal.

Any friend of Linny is a friend of ours. Welcome!

No idea what you’ll get with that Aliexpress Unity, though.

@BillGordon @Linny thanks for the warm welcome guys hahaha. I have been DIY building for almost a year and I love it.

We have already seen that ad. I don’t think anyone pulled the trigger

. There is no warranty i bet and if it arrives faulty then ur fu***d

. I would not recommend buying it. @Linny will surely fill you in on some of the stuff that has happend if you don’t know already, like the enertion raptor parts shop.

Idk, I always check the add once I see it, did noticed a number of people getting there things…

I bought one for funzies. My CC company is a boss at refunding bullshit and I’m very convincing.

Will let you guys know what arrives, I plan to swap it into my mtb build using the exact same settings and see what happens the day it arrives (May 18th - June 7th). 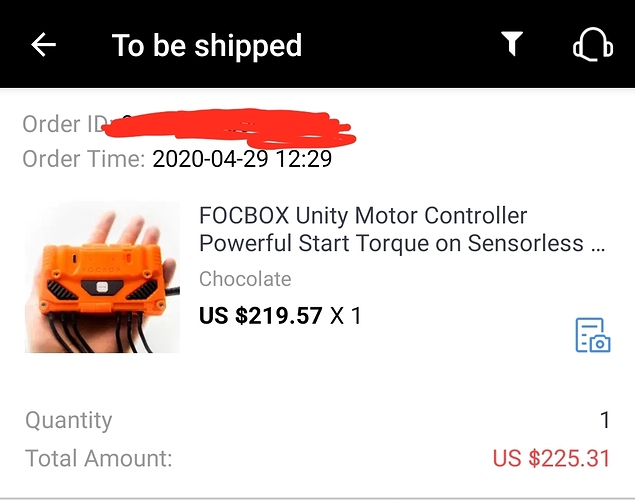 I’m expecting a bar of chocolate.

I actually have a pretty good experience with claiming refunds via AliExpress. I made two claims so far and money was refunded in both cases.

The first claim I almost felt bad about. The order was for 15 TFT displays. The vendor sent a different kind than advertised. The picture was a lot dimmer than normal. I haven’t realized this until I had two displays soldered to my PCBs, at which point there was no (reasonable) way of sending them back.

So I sent back only the remaining 13 pieces, claiming 13/15 of the paid amount as a refund. The vendor rejected the refund so AliExpress jumped in to decide the claim and granted me a full refund, which was shown to my account within a few days.

That said, I wouldn’t be too worried ordering the Unity from AliExpress.

I ordered 4. For the community

Friend ordered 2. Got them already. But he paid 50 shipping

They are willing to do a MOQ 100 units. But they want too much

Appreciate you guys taking the bullet, do let us know if it’s not snake oil

Looks like they are using all the same pics as the Raptor Parts Shop or whatever it was called. If we all think that was jason, i see no reason not to think this is him too.

You know, I have as well, albeit for small things. So that’s a good point.

I actually have a pretty good experience with claiming refunds via AliExpress. I made two claims so far and money was refunded in both cases.

Yeah, for every 10-15 successful, there is one they push back on and screw you on for seemingly no reason. Unfortunately, lots of disputes is just how it goes ordering from China, but it’s not a get out of jail free card.

Looks like they are using all the same pics as the Raptor Parts Shop or whatever it was called. If we all think that was jason, i see no reason not to think this is him too.

Has anyone asked if they are just draining old stock of if they are actively producing? Someone over on the other forum apparently go a Unity from them already. Asked for pics, we’ll see… Wonder how old they are.

@jansen Got a couple I believe!

yeah the raptor cleareance ad on FB caught my eye as well, looks as if people have started to receive orders as mentioned above, kinda tempting also just to see

If it arrives as it is expected, and it works perfectly as it should without any faults I’m sure the esk8 community would have some great deals at aliexpress hahaha. Thanks for taking the bullet by the way and fingers

it will come as it should.