I’ve Built 3 Boards in my 4 years of Esk8. Not once have I made a build post despite every time I made one claiming that I would to those who helped me. To make it up to them, this post will be extremely thorough and well put together (I hope). This is not my first build (and definitely not my last) but will unfortunately not be as clean as my next build due to my limited resources being on my college campus. Now For the Build! 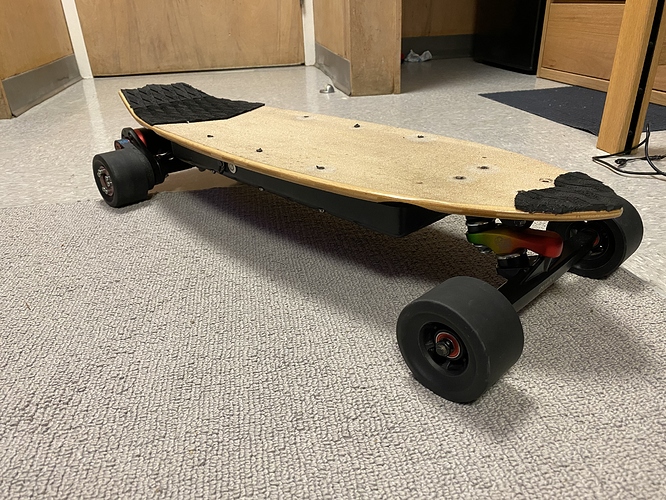 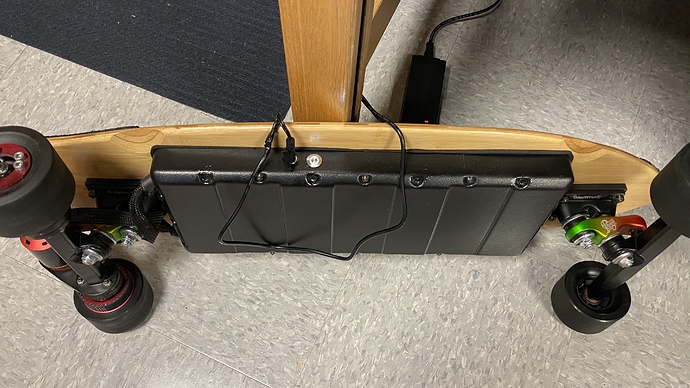 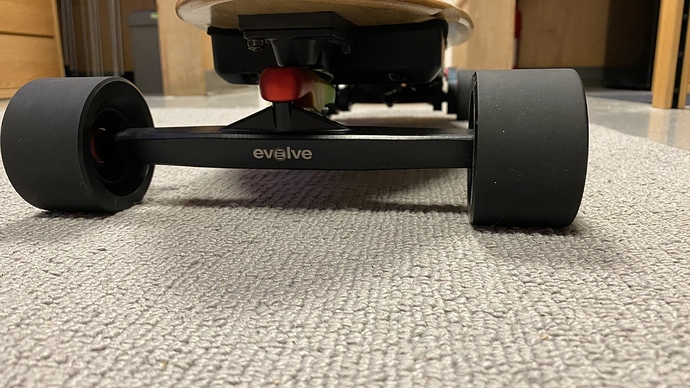 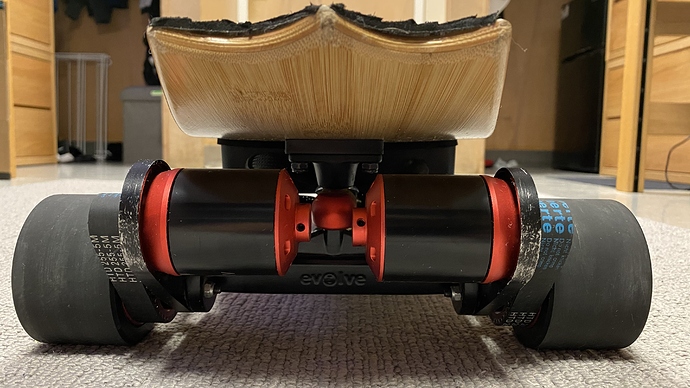 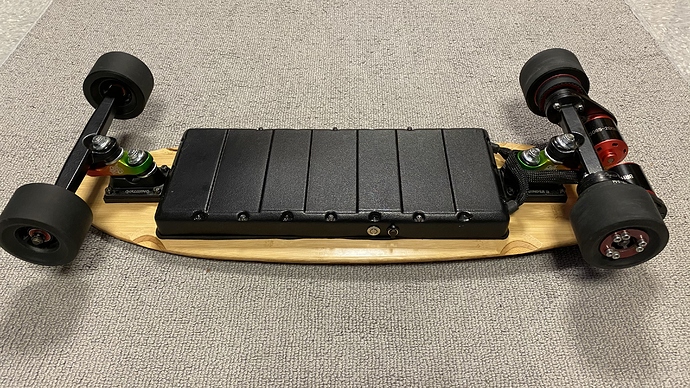 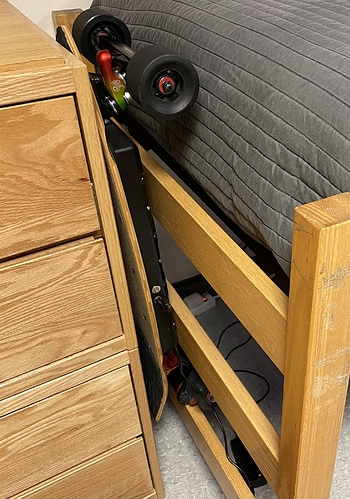 Thank you to everyone who helped me out and thank you for taking the time to look this over! Do not hesitate to reply with questions or thoughts!

I assumed I was going to be under the mistakes category

That board is mighty sick and makes me Pnut and jelly

I appreciate it a lot man! I have never heard this phrase but I love it! I can’t wait to drop some cash and make a really professional board when I’m home and have TOOLS!

I forgot to mention, I could never put you under the mistakes category! If my parents were writing this however…

I want to see a riding video of that thing!
For a daily driver you have a really good choice I think

I was considering adding a video to the post. I will definitely do so when I get a chance. Maybe tomorrow

.
There are actually a few things that I dislike about the board, and I’m actually about to add a section to the post about that. Give me a few minutes and check back if you’re interested.

This is a great board and great documentation as well

Thank you so much! Whether or not you recognize it, you’ve been helping me out for probably all four years of my building, so Thank you! I will see if I can find proof of it. JK I found it!
I’m sorry that our previous interactions sparked some arguments, but that was kind of the nature of the previous forum… 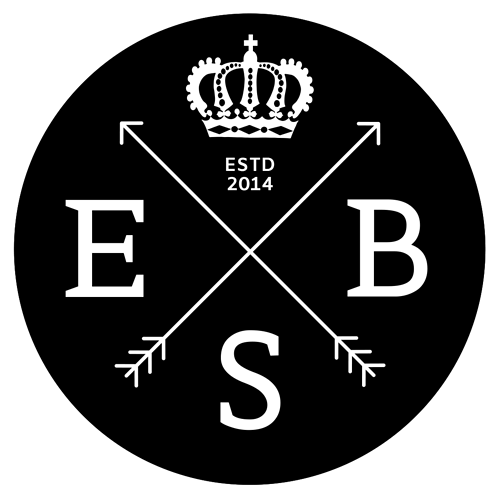 Reasons not to buy Cheap LiPOs and Alternatives (Don't Buy)

Hello All, I made another post on these batteries specifically about the amperage and the risks, but that has been resolved and taken care of. I am making this new thread to discuss if it is a good idea to purchase and use these batteries for a few...

I also added a new section to the post, and video will be coming tomorrow or the next few days!

Bummer it doesn’t sound like it was what you were looking for. A drop-through on rkp is def a completely different ride. Try and find a db seafarer if you can, may fit the bill.

Don’t get me wrong… I LOVE THIS BOARD!!! It’s almost everything I’ve ever wanted in a board and is suiting me perfectly in my current situation. There are just a few changes I would make to make it my “dream setup.”

Also I’m super glad you noticed it was a Stoke imitation. It was a huge inspiration but I think I like what I have better. It has much better range. At the end of the day, a two 6s lipos can out-pace and out-range the evolve battery on the stoke for $130.

I don’t wear a helmet on the way to class

You really should on an electric board. If you’re worried about size, I recommend getting a folding helmet like this one: https://bombinate.com/shop/closca/graphite-and-white-loop-helmet/2100051000510820775

I like the Bustin-Boards Sportster, but I am worried it doesn’t have much flex to it.

Yeah, seems like the latest models of it don’t flex as much as it should. See if you can buy one used off someone so that you know for sure it’s the flexy kind.

What’s the weight on this board ? For small board this is my #1 goal

This is well put together, hope you’re enjoying your build. Only thing that really bother me is

I don’t wear a helmet

Get a helmet, you don’t need speed to fall down on your head and get a concussion and die from it. Also assume one day you’re going to hit your head on some ledge or edge and the helmet will be your very best friend.

Personally I wear a full-face helmet and I don’t care how I look.

Or atleast get a thousand or smthn, stylish so u dont look weird. And once you have it you will notice how worth it is, even for your confidence, making you a better rider and getting more out of the board.

Sweet dude.
I have been really enjoying my homemade Stoke.
Dual kingpin on a short deck is a trip.

I always buy the b stock ones that are more affordable. 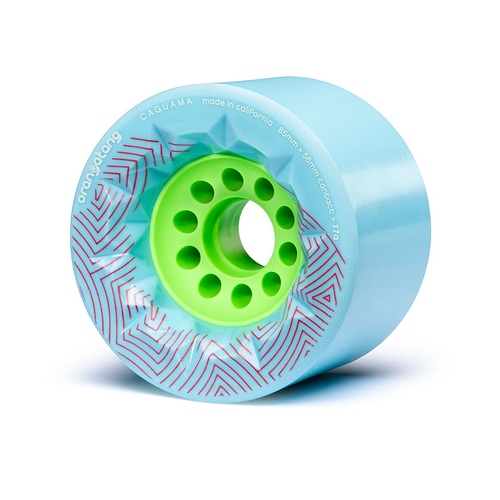 Save 25%. First quality product with slight cosmetic blemishes. May not look the prettiest but it still rides just fine.

You can trip and fall walking 1mph on your feet, and hit your head hard enough to cripple yourself or die. Putting 4 wheels under you greatly increases the chances to fuck up, and there is no excuse for not wearing a helmet.

Not only are you taking a needless risk with your own life, but every injury or death that happens on a PEV has a chance of being used to make PEV’s illegal.

Please keep yourself safe. We want you to stick around.

It’s under the “board performance” tab. It’s 15.6 lbs. If you wanted to save weight you could go 10s2p or 8s2p with 25r cells. I recommend the 25r over the 30q for the smaller packs because I value acceleration, but if you want more range go with the 30q. Another thing is DKP trucks. If you want to shave every pound then getting normal caliber trucks will save you a lot of weight.

@rusins @MrDrunkenMobster @LuuktH @devguy
I completely agree. I hate not having a helmet but I outgrew my old one. I convinced my parents to get me a Rurok for my B-day with the sale that is happening rn. We all snowboard together so I figure it’s a good investment for both sports. I go especially slow and I’ve gotten very good at falling thanks to snowboarding and hockey, so I will just be careful until I do get myself a helmet.

3 years ago with my first build, my enclosure fell off and I wound up running over my battery and being sent flying at about 23mph. I was wearing a helmet and I can attest it saved my life. I hate not having a helmet, so I will be getting one asap. I fully recognize the danger and do not recommend to anyone to do as I am.
Also, my ride to class is quite short