Frankenboard was my first build. More of a mad scientist experiment in esk8. I found an old 90’s pool deck for $10, made a crude fiberglass enclosure and did some sketchy home-jobber welding. I did isolate well and all the joints are soldered well, so the battery has been quite reliable. I started out with the flipshite 4.2 dual and busted all the caps off and still rode it to work. No BMS. Eventually switched to a hobbywing dual ESC and hubs and put a BMS on it and gave it to my brother who rides it around as his last mile board and reports zero failures in 6 months. 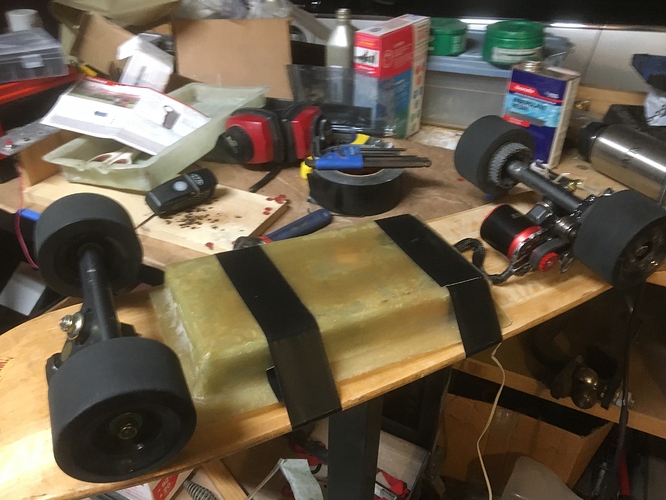 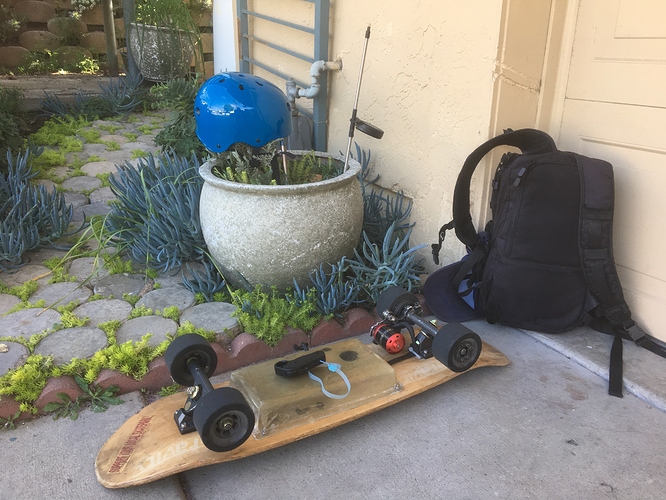 This thread is about the next two builds, both of which I am very happy with.

Marine style 100a breaker switch on a “custom” wooden panel

Encouraged by my battery success with Frankenboard, I got a master Cho enclosure and hunted down a DB Paradigm shift drop through deck. It has a lovely w shape deck, and just enough of a drop that cradles my foot in the sweet spot. Split angle trucks and TB218’s set for going fast. Racerstar 5065’s because I already had them and because I was still using the nano deathtrap remote. I rode this remote longer than I care to admit, and even got used to the spots along my commute where it would jam up for sure. I ran receivers to each focbox a la @b264 and this made the interference more tolerable, but the solution was a better remote. Got a benchwheel remote and never looked back. I’ve got about 1000 miles on this rig as of this posting, ride it and Deep Purple v2 every day to work. 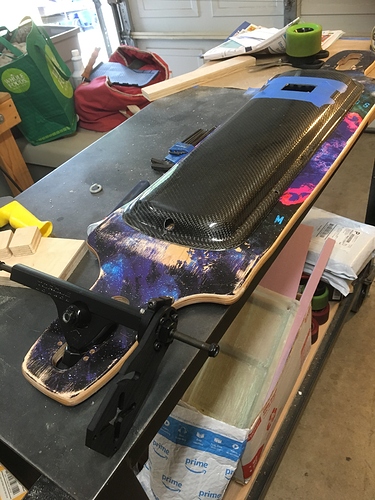 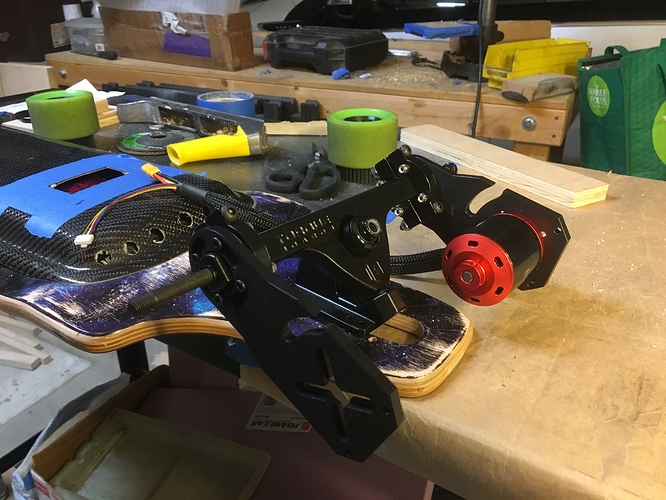 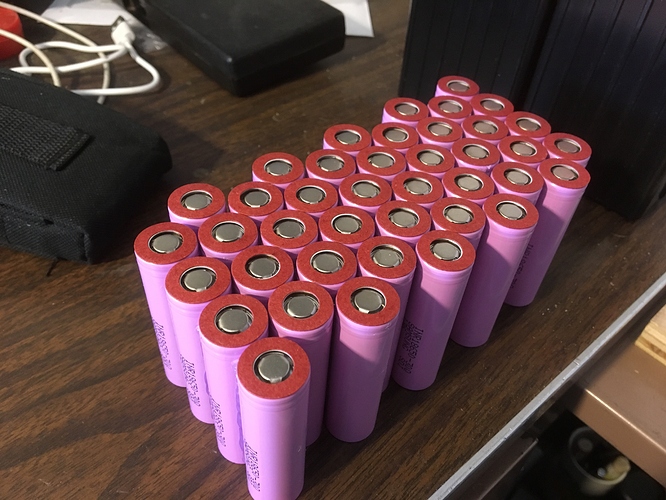 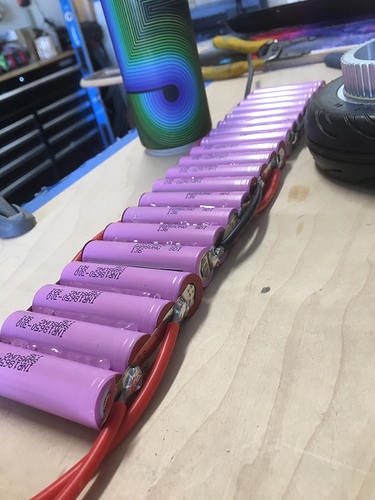 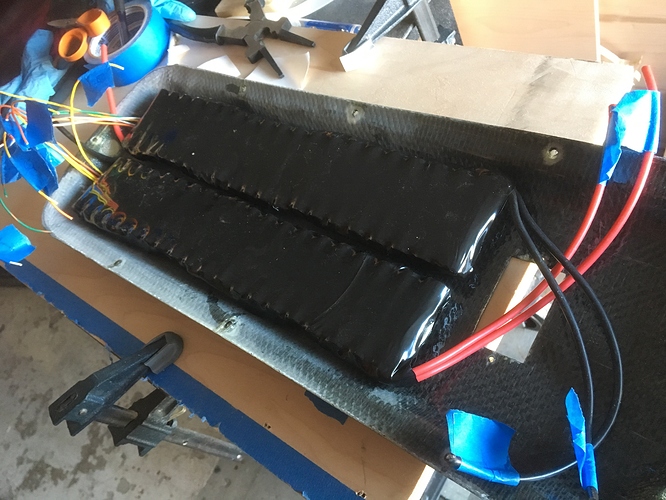 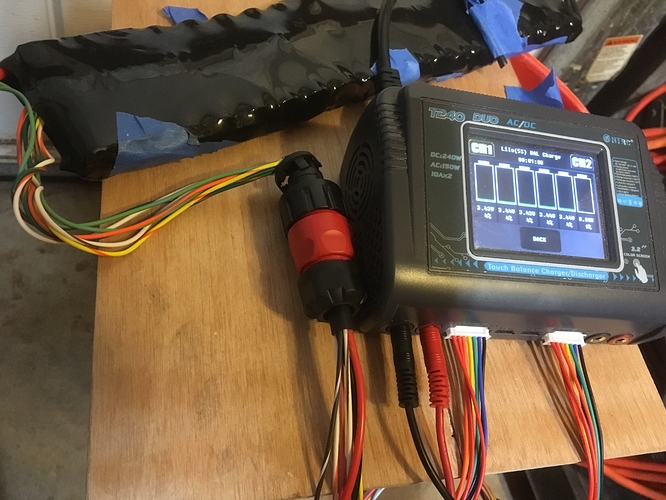 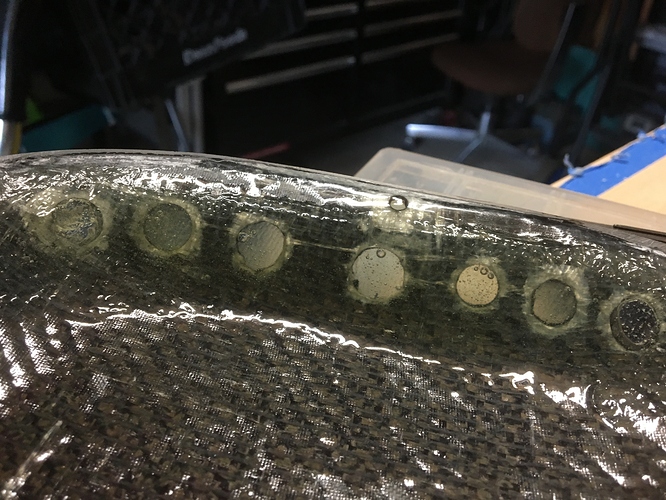 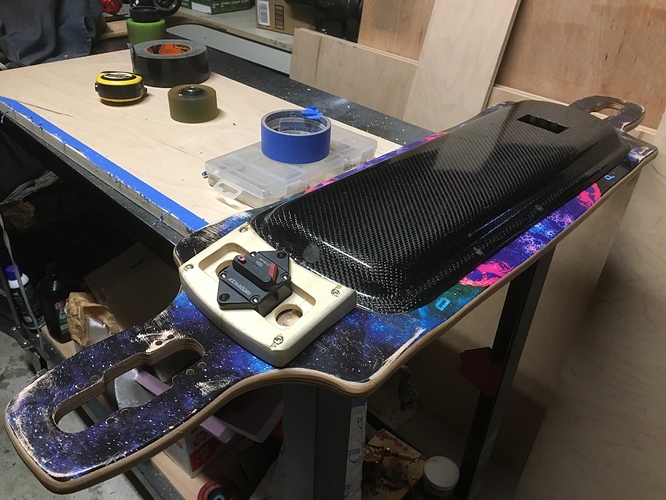 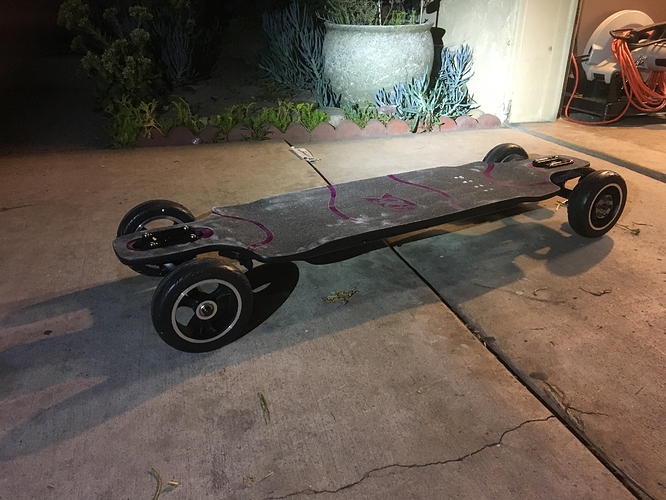 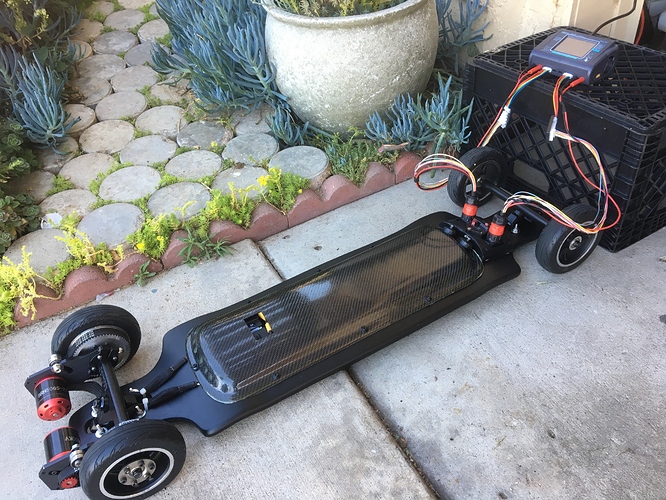 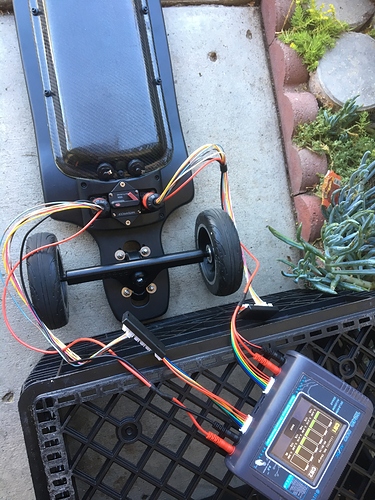 I liked Deep Purple so much I wanted to make another, but with more juice. I set out to build the biggest single stack possible on this board, and since I had something to ride, I was able to be patient in the construction. This patience went a long way and it really looks nice. People ask me about it all the time, they wanna know where to buy a board that goes that fast, lol.

Still figuring out my wheel situation. I had some gummies on there, sold them. Then got some TB’s at wheels, they’re ok, but I like the feel of the dickyho’s better. And since I commute I know I’ll eventually get a flat.

Some progress… The foam mold was partially destroyed, but it came out in one piece. If you don’t have enough mold release (wax) it will take more work or be impossible. This one pretty much popped right out (10* relief helped here as well) Material removal was done with a grider and a cut off wheel, then 60 grit flap disc. Be kind to yoursef and do this part outside with proper safety gear👍 I went right to the edge of the deck, the lip that’s going to take the bolts looks a little skinny in … 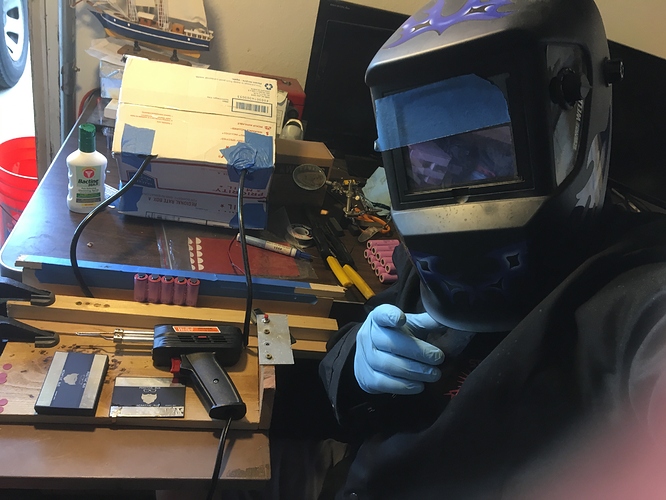 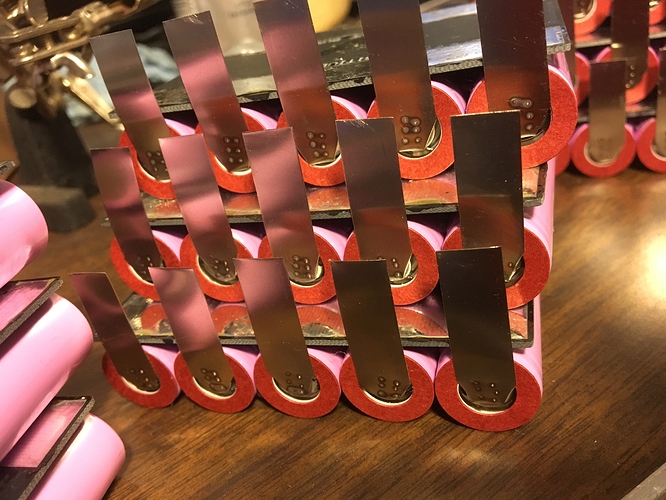 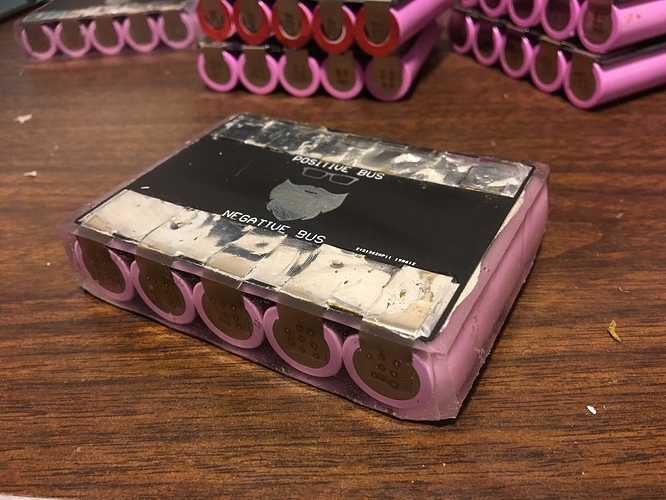 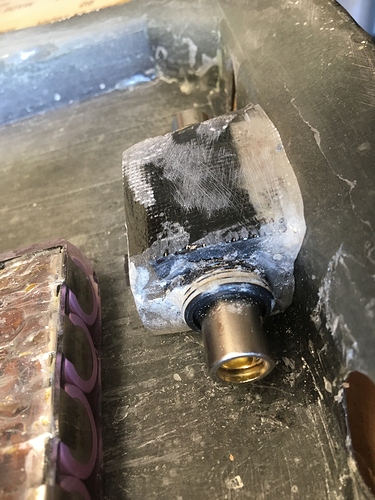 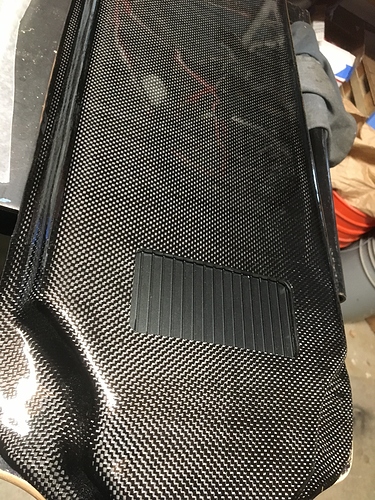 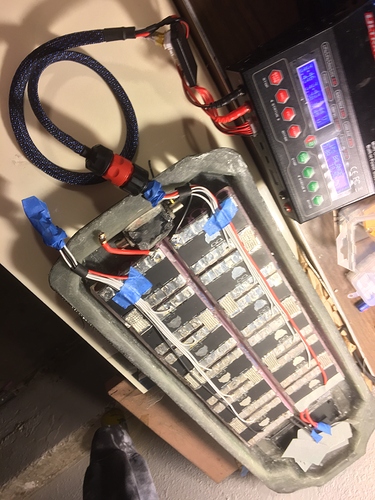 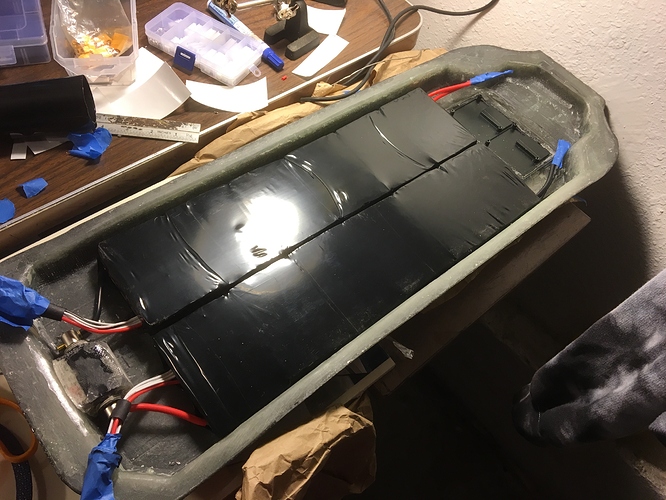 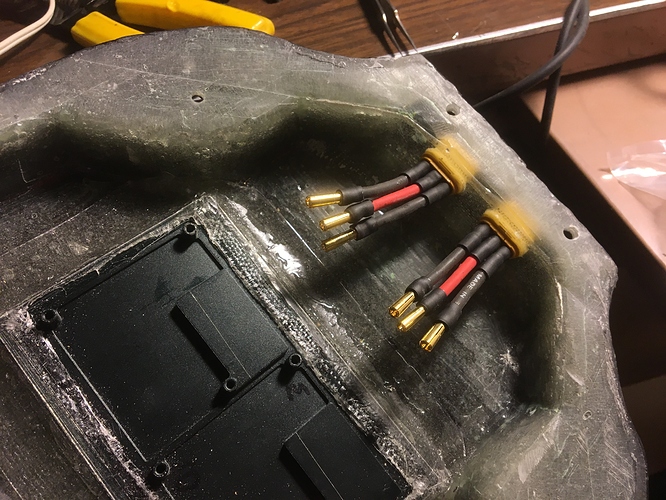 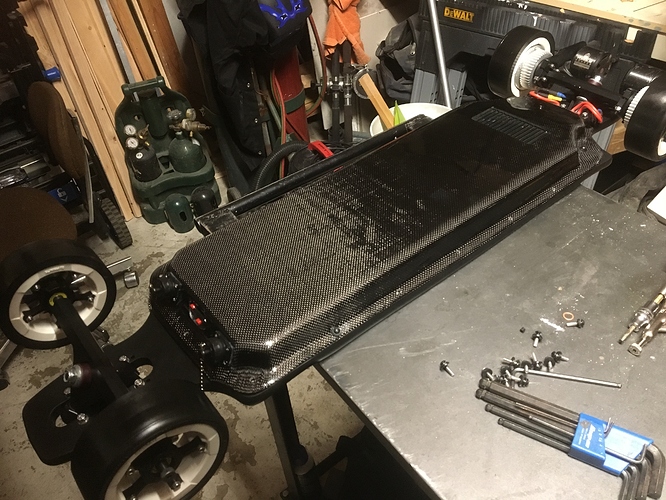 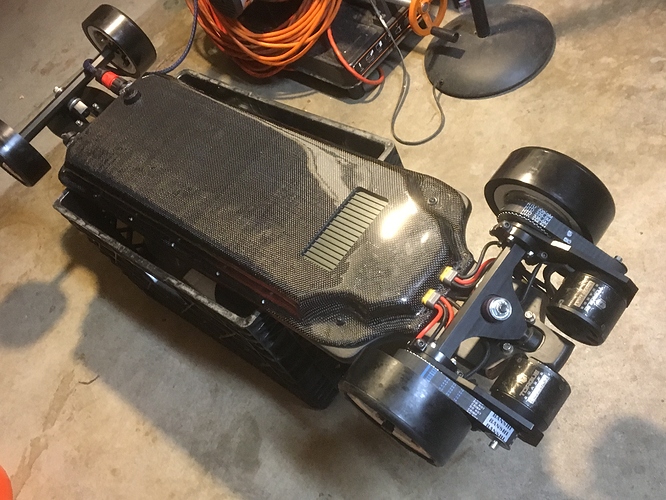 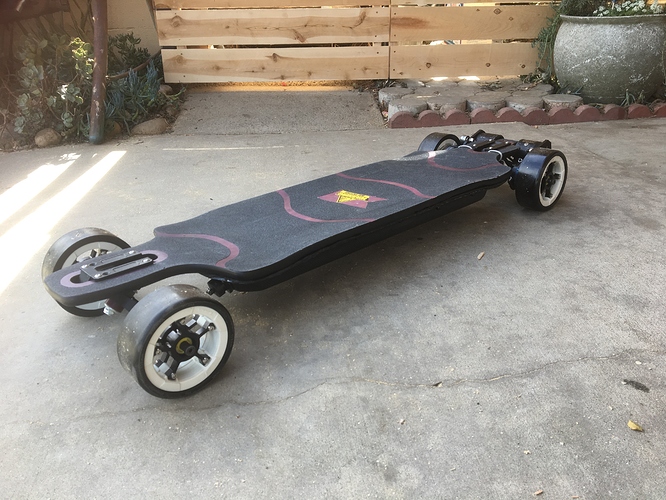 Wait wait wait… That CF enclosure is home made!!! Please make a write up on how to do that…

Ps, Idk why but the shape and looks of the deep purple v2 look amazing

these look great thanks for the write up. can we call deep purple 1 “space_truck” and deep purple 2 “highway_star”?

Wait wait wait… That CF enclosure is home made!!! Please make a write up on how to do that

IMO it’s the combination with Trampa hubs and gummies. I like it alot too. Wonder if @jeffwuneo can make us better PU for MTB hubs as well?

Wait wait wait… That CF enclosure is home made!!! Please make a write up on how to do that

Haha, thank you all for the kind words! @DEEIF @mynamesmatt @glyphiks and anyone else with home-made enclosure dreams: wish granted! Check this out!
I’d love to improve the topic, so please chime in on that thread if anything is unclear

I wanted to finally start logging a build here at the risk of making something that dosen’t work so we can all learn together. One of the hardest things I’ve found about esk8 is sourcing well-fitting enclosures cheaply. One route is ABS or Kydex. However, I don’t have an oven big enough to soften the stuff to form around a mold, plus my lady will kick me out if she finds me using the oven to bake anything other than food again. I have some decent experience in shaping foam and laminating surfb…

these look great thanks for the write up. can we call deep purple 1 “space_truck ” and deep purple 2 “highway_star”?

I like it, lol
I often hum “Smoke on the Water” in my head, but now I’ll be SPACE TRUCKING

Dammmmmnnnn. I need to build a highway star.

Did you cast your parallel cells in resin? Just wondering about your experience with it, is your pack still doing ok?

haha, yeah, I was waiting for someone to notice that.

the battery is doing great, cells stay balanced, never notice any heat from them, the dual focboxes warm up nice and toasty, as to the motors, with the braid and the balance leads all conformal’d I got away with riding it in the rain. Killed the focboxes tho…

here’s what the board looks like now.
shoutout to @Arzamenable for hooking up some yobis 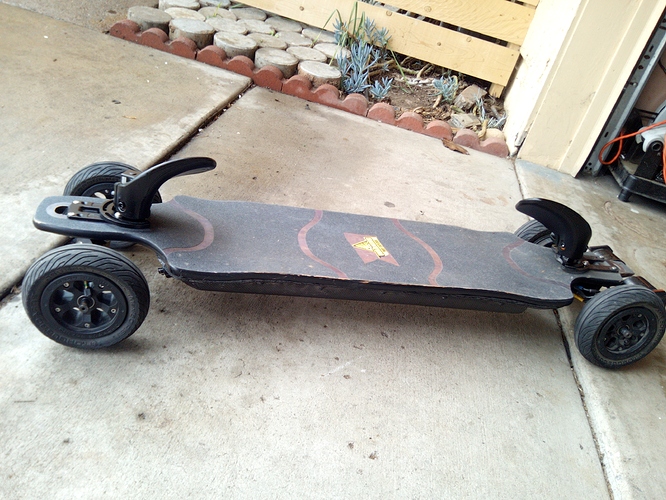 The darkness? Gimme those back for a build I’ll never finish!

Never actually seen anyone casting cells in resin, the only concern I would have would be in case the cells heat up and expand, some pressure could build up and lead to the resin cracking or exploding, I noticed you did not put it on too thick so the heat transfer should not be affected too much. If a flexible material with a good heat transfer coefficient could be used to cast the cells it would be ideal. Would be nice for someone to start experimentig with cells casting.