Ronny @UFOskada with all the amazing builds its a big honor for you to think of my build, thanks for the love bro!!!

@xsynatic I hate to even mention the category i will enter as the @NoWind might be in it with his beast but i might get lucky with choice of the most DIY group (he can go either route), but im gonna roll with “off road builds”

Lol he’s got offroad in the bag

uh yeah!!! i was going to nominate him but someone beat me to it, hes got whatever he enters in the bag IMO.

I’ll make this a proper thread with progressions on this thing I’ve been working on for about a year now ASAP. As for now, components: Dual Moon GD (4WD) Moon hubs on 10" tyres 16s9p 40T’s Dual Ubox Luna trucks 173KV Reacher motors I have alot of work in terms of cleaning and setting up this thing for the longterm, but just a teaser for anyone who cares: [PXL_20210925_023855150] Testing tomorrow! Thanks @kevingraehl for the motors like a year ago or whenever that was and @moon …

This one fully deserves to be here. It’s quite appropriately named after the full @moon/reacher drivetrain and the over all look. Just an overall beast! 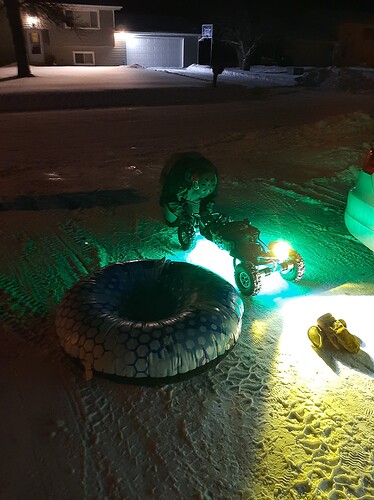 And another one with a gorgeous full @moon drivetrain.
The super clean aesthetics really peak my fancy. Kudos @tomiboi

Well, while I wait for various parts to come in from all corners of the globe, I’m going to get started on a build thread for my new whip, and make a custom MTB deck to tie it all together. Here’s the parts list. Battery: 16s8p 40T tomiboi custom Motors: Flipsky Battle-hardened 63100s 190kv ESC: 2x Flipsky VESC 7550 w/ 300A anit-spark (Ended up getting a non-incendiary version of the Ubox) ESC box and heatsink: tomiboi custom Drive: Moon helical gear-drives (4.4:1) Trucks: Luna 360s with 1…

If you haven’t selected what category you want your build to be in, fuckin do it now before the Duck gets back and puts you in the shitcunt category.

Help us help you!

Only 2 so far in off-road

Thank you! That deck has been a blast to ride. It’s a roadster so it’s going in the street category.

If you haven’t selected what category you want your build to be in, fuckin do it now before the Duck gets back and puts you in the shitcunt category.

You have until midnight PST tonight (16th of January) to specify your category.

If you dont pick by then, I’M PICKING FOR YOU, and no whining about what I pick afterwards.

If anyone knows how to reach any of these people outside of the forum, let them know they need to get in here before the scary ducktator puts them in the wrong category.

You have been warned.

when will voting start/end?

Honestly his build has the potential to sweep the offroad or DIY category. So I’ll probably put it in street builds lolz.

Someone get Jens on the phone and stop me

when will voting start/end?

And before you say “but duck, the first post doesnt say when voting ends,” it ends when I say it ends damnit!

(Probably keep it open for like a week or something)

put it in street builds

his tank can also wins in street build, if i didn’t have my money on Outrun

damn that build needs to be in ridiculous build category