what in gods name

We both laughed simultaneously, ‘lets do it’

So there’s no commercially available long board, so we have to make one.
I used 15mm Baltic Birch plywood, and cut two long 1 meter x 25 cm pieces.

At the time we took flexing in the middle in mind, so we placed two trucks in the middle-ish. Big regret, you’ll see why later.

I could make the corners rounder, but hey, more material means peace of mind and less of a chance of something snappy happening.

Then back at home, worked on the electronics. Using a spare 8S lipo from Jeff’s Vanguard build which he swapped to a Li-ion pack. Using two old Ollin VESCS as well, and the ol trusty loop key.

So this is the current state of the board now. Got spare Orangatang Kilmers and two trucks with goodwill from @BillGordon, to be used as leverage to prevent the middle from flexing down. When we installed the front and back black trucks, the flex in the middle was like the flexiest Vanguard!

Thus, a way to make it able to fit in a car, and for ease of transport, this octagon is what connects the two decks to one.

Lin, Jeff, what the fuck have you guys made

NOW, turning was near impossible because of how we positioned the trucks. I know i know…

Also, getting a bit of wheelbite, so to the drum sander we went!

And eventually its stain and grip time.

Made a wooden enclosure with 15mm birch again, and mounted it to the deck.

Cut out the holes for the loop key and voltmeter.

And we have power!

So why did we make this board? For science! And for fun, because there’s a monthly event in Singapore where the roads are closed for half a day, and it’s the only day where its legal to ride on the roads. So i’ll sidetrack a bit and share a bit on the happenings from the event as well. 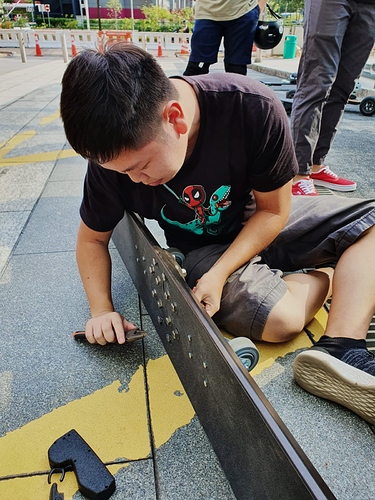 Got all the esk8 SG guys to sign on the enclosure as part of esk8 history.

And there’s the esk8 squad. Smaller group today due to some with commitments and couldn’t make it but here we are! 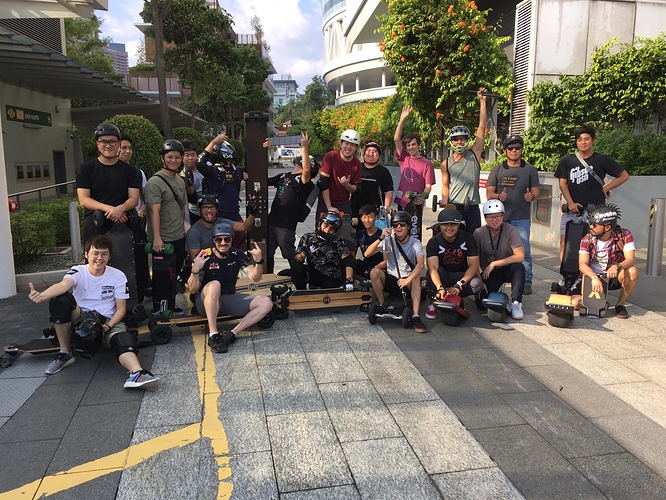 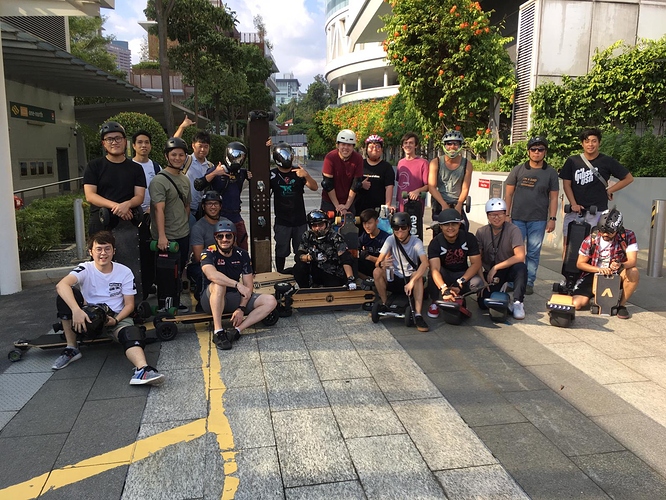 Enough talk! How does it ride? 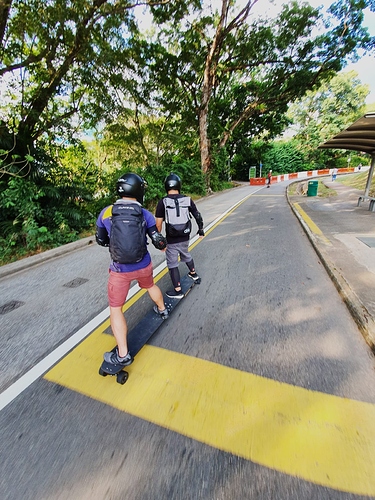 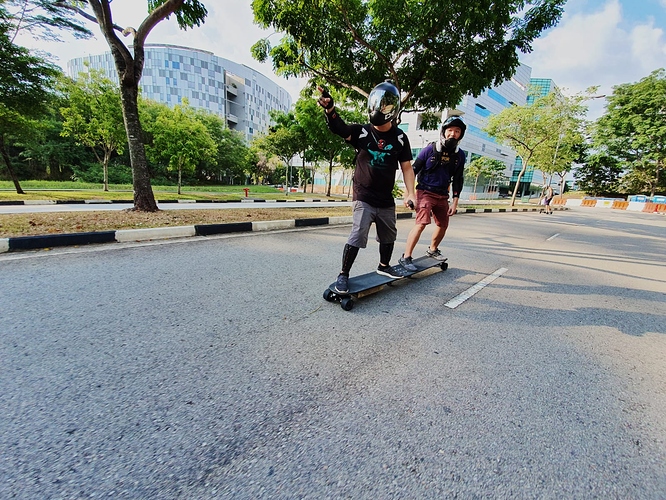 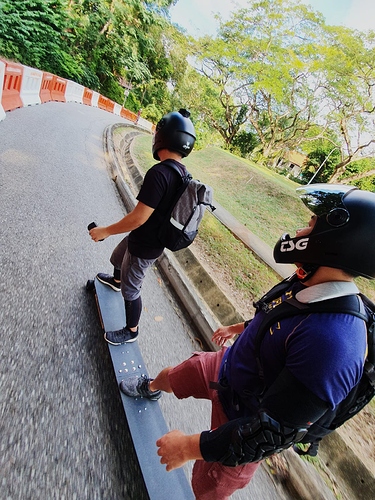 Well, turning needs to be perfectly synchronized. I mean really. If Jeff turns just the slightest without me knowing, the board will lean and will lead to me losing balance and falling off. Fortunately no falls, only once where Jeff had to run off due to losing balance when leaning a bit.

The first 2km, Jeff sat while i was standing. Once we were somewhat comfortable in that position, i asked if he wanted to ride while standing, and off we went. Turning radius was larger definitely, but it was still doable on road turns. We went a total of 12km, and it drained the battery to about 10%. Not bad for a 140kg load eh?

From the vid, you can see that it kinda struggled to climb the hill slope but do note it’s pushing two people, and also partly due to the 5055 motors that were used. Should’ve used 6355s but hey, it managed to push us. We went max 25km/h, any more than that, it’s literally suicide.

And of course, we have to represent @Grievor and his awesome bag for being able to fit even the most insane size boards out there. 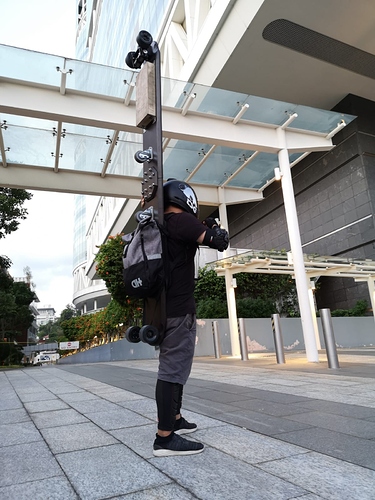 So yea, big thanks to @avX and the rest who gave ideas/suggestions on this crazy thing. This is definitely not a practical board and was made just for fun. It’ll eventually be dismantled but the enclosure will be kept with the signatures.

On to the next crazy build!

yooo this made my day

The right kind of bat shit crazy. Love it.

O… M… F… G… that is awesome! I’ve thought about dong something like this and trying to imagine how the middle “trucks” would have to be configured, and you guys did it. I want to see some video of you two riding together. The only way I could see this being any cooler is if you had a Linky type hinge in the middle or 2x2wd with the ability to engage two normal middle trucks, so it could be used as one or two boards like Darth Maul’s double light saber. I also think you need to find two dancers and have them do a synchronized dance number on that beast. I’d like to see that. Next Olympic sport? Tandem electric looooongboard synchronized dancing?

Both appalled and wildly impressed with this.

I love it when people do shit for no reason whatsoever.

Also this board isn’t sketchy or dangerous to ride at all!

Thank you! Ride footage is right here. There should be more coming tomorrow from the guys with insta One Xs.

If you make another of those bottom plates for the top and put fixed bolts, you can assemble with 1 tool.

How’s it ride for a single person? Or a 6 pack?

The mom and their children.

Oh and btw, ordinary castor wheels do not do so well on speeds. This happened to the wheel nearer to the enclosure, but the other one is fine. I believe this is due to the castor randomly spinning and grinding onto the road than rolling.

Haha. Turning is similar with one person, but the user needs to stand in the front, with the foot under the truck bolts for max traction. However, the back wheels will flutter and flap around than roll due to no weight on them.

Nice. Looks sketchy, but fun. Time to bolt a lawn chair to the back half and start giving Uberskate rides for profit. 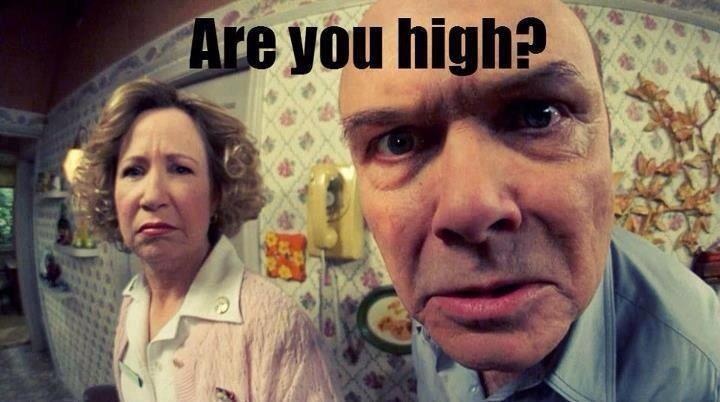 Look at my profile pic, and all of my other boards

You guys are crazy! Just love it… Those things make me want to build the whole day. Amazing. For real!

@Linny I think this is the most stoner board you have created… “what about if we make a board for two people mannn. It could be 10 feet long, go about 10 mph and we can add grocery cart wheels on it too!”