I think that’s a great value, not sure what you mean?

Shipping on webshop is now updated, 25 USD for small orders.

Is the registered Letter trackable and insured?

Yes, it’s insured and trackable, it needs your signature on delivery. Not sure how much tracking info you get during transit.

What’s the distance between the 4 mounting holes that the motor plate uses to attach to the clamp? Am wondering if I could replace my Boardnamics mount with one of yours, without removing the already loctited clamp…

They are not compatible. Dimensions are in the esk8 builder thread linked in the top. I will make some simplified drawings with all the critical dimensions later.

Dimensions are in the esk8 builder thread linked in the top

I wouldn’t count on that being online. Might want to migrate over here before it goes down permanently.

the mounts look great. Really appreciate your consideration for sizing. There are definitely some design considerations here that I wish some other vendors took into account.

Ive been working on something very similar. This is fresh off the 3D printer and after its first 6 mile road test. These plates are 66mm center to center I like the ability to add crossbars, would be my only suggestion. Do you have belt covers designed for your mounts yet?
The slightly shorter plates, but especially the rounded corners and re-oriented motor position 45* gave me tons of clearance compared to the boardnamics non idler mounts they replaced. These being 66mm would need to be a little longer to get idlers in there. Im running 15T/40T and a 275mm belt and experienced no slipping 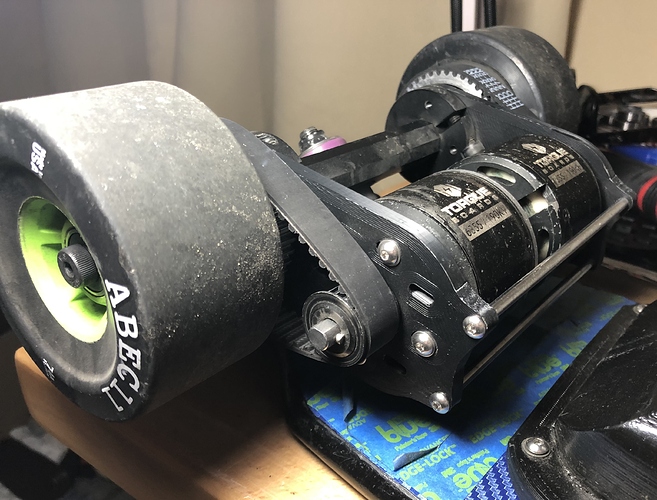 Yours look great. Some of us, like myself are not running caliber or SR trucks. Can you share with us the bolt hole layout for the motor mount to truck clamp? You don’t currently offer a clamp for my trucks, but id love to give the mounts a shot. My Boardnamics for example are m4x4 on 36mm diameter circle.

Dimensions for the hole pattern is 40.04mm diameter. (M5 x 4) x 2. Reason for having 8 holes is that I get twice the amount of available degrees with the slotted plates, and still be able to use M5 instead of tiny M4 screws. And the fixed plates also get that alternative degree option and a nice angle for mounting rearwards. Anyways, here it is: 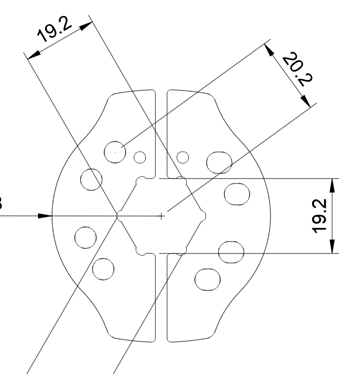 Nice mounts BTW! Looks like some of my prototypes with the crossbars in front. Went with them inboard instead since i found I got more clearance for battery cover and still got nice stiffness and square/paralell mounts.

Ah nice, that mount, especially with the two bolts oriented where they are may limit how close the motor can get, but any closer than where mine is will definitely reduce the belt contact with the motor gear too much.
Good idea with the 8 holes. With a fixed mounting position, just remember to test it with a few different baseplates. Even just 50 to 44 makes a big change in the way they swing. But 35 degree baseplates might make a fixed position arm unusable.

I got the crossbar high enough that it doesn’t interfere with the deck, but youre right it does extend the length that way (these are 7mm thick ABS so definitely needed the extra support). I like the inboard mounting screws you added. Can be used for crossbar and a pulley cover

Yes, fixed plate was designed for 50 degree trucks. Slotted version for all others. What trucks do you got there?

those are kevin’s aka @boardnamics 184s and precision clamps, caliber 44 degree baseplate.

@bwahl602 That’s good to hear, I was only joking around

Is there a difference between those and E-calibers except for the precision?

Quite a bit and the hanger geometry is different

Ok, thought it was the same geometry as calibers. Surely caliber clamps will fit those? Why do you want to make your own motor mounts?

The BN hangers are hex on one side where the calibers are rounded. Probably would depend on the clamp.

I honestly just started playing around with it. I’ve been tinkering around with f360 and even researching designing a gear drive.
But I’ve been frustrated with the motor mount options. For front mount rkp, most of the mounts are just too long on the market which makes clearance tough. My motors have taken a beating because of it.
Second was the need to reorient the motors position to give a better path for the wiring. You’re one of the only vendors I’ve seen that have the motor oriented the way I did as well, 45* from everyone else’s. I’ve got damaged cables from the interference of them hitting the truck clamp because of the way they exited.

You’ve got a good lineup there. There’s honestly too many mounts that are trying to be an all in one. They’re either too short to be good rear mounts or too long to be efficient underneath.

Yours have a few more mm of distance between axle and motor than the ones I drew up. And the biggest weakness of them being shorter is not having space for an idler. Which you captured perfectly

I’ll pick up a set when the funds recover one of these days. Nice work

I saw you were using pan heads for the M5 bolts. Are you using stainless hardware? Tensile strength is significantly lower and it’s much easier to strip. I’m using them now because i had extras from the enclosure, but they’re not ideal
[M4 socket cap with washer](US $6.46 | M4 M4*10/12/16 M4x10/12/16 12.9 Grade Black Carbon Steel Allen Head Hexagon Socket Bolt Spring Plain Washer Assembly Screw Set https://a.aliexpress.com/EJEbyCre)

If you switched the motor bolts to something like this, you could use the same 3mm hex that the 5mm pan heads have. The socket caps use a size higher than the pan heads, which is great because 2.5mm hex drives are easy to strip (that’s the pan head m4 size).
Socket caps have a lower surface area (7mm for m4) compare to pan heads (7.8mm I think). But these have narrow washer measuring 7.9. So you get a larger hex drive and the same effective surface contact. They are deeper however.

Yes, I have looked into other screws because of this. At least for the motor. Screws going through the clamp have the lock nut, so those are easy to get tightened hard without stripping, only holding screw in place and tighten using the nut does the trick.