Where are the carbon fiber decks?

Just curious, why are so few carbon fiber decks out there for ESK8? I come from a cycling background and carbon fiber is everywhere. I can’t imagine fabrication is that difficult. Am I wrong? What other factors are preventing carbon fiber from being more widely used in decks?

Carbon fiber is opaque to radio signals as an electrical conductor and in this regard, fiberglass is much preferred, being transparent to radio.

CF isn’t great for RF, but @b264 already mentioned that

There are plenty of hybrid cloths like carbon/fiberglass and carbon/kevlar . Not sure if a single skin layer would cause problems.

Carbon Fiber Longboards & Skateboards. Over 20 styles, over 23 colors to choose from.

The biggest issue with CF in esk8 is the vibration that transfers from the road to your feet. I have a Hi5ber deck and it definitely get tiring after a while if the roads are rougher.

You can buy a CF deck from Backfire. Weird that it has flex though. I got one for my Mellow drive

Yah to add another point for fiberglass it’s a bit more flexy and is used in combination with other materials for at least some of the loaded decks. Think also the major factor regarding weight of builds for people here is the battery choices and/or wheels rather than the deck itself which you rarely notice (the weight of) when riding. 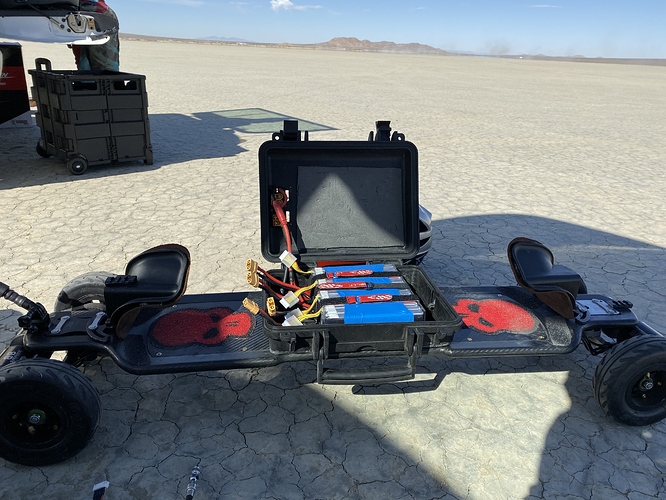 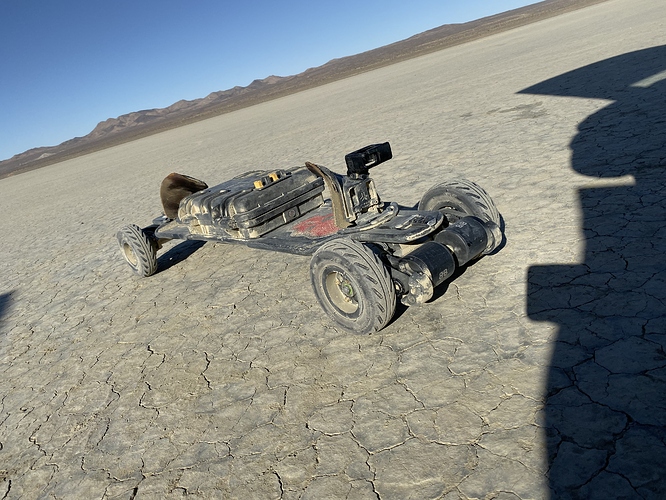 This was mostly CF at that time. carbon Gt for the win!

Trampa and Kaly are composites. Maybe not 100% CF as some Is maybe basalt and FG.

I find 100% carbon fibre to be a really silly thing to make a deck from, because it not only doesn’t absorb any vibrations, it actually transmits them down the deck i.e a crack hit on the front wheel will just transmit to the back. Even a stiff wood deck doesn’t do this. Its very bad for the internals to get slammed around like this. In addition to this, the shape of CF decks is more than often very poor just because its hard to make a good concave and W shape. And you pay way more for all of this 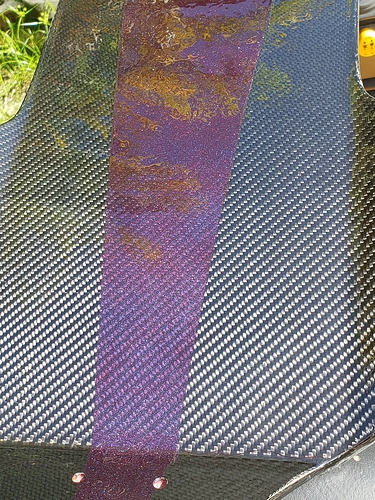 Sure is good for the eyes 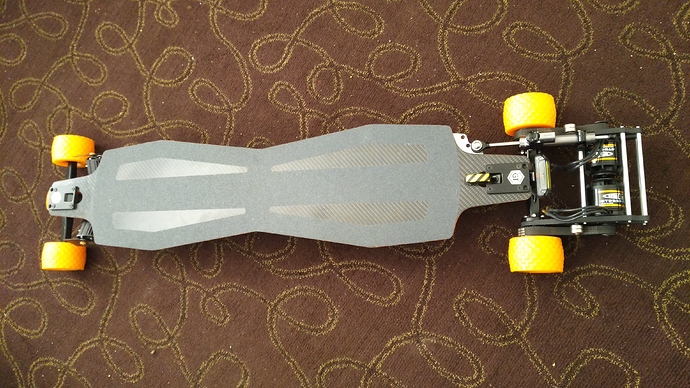 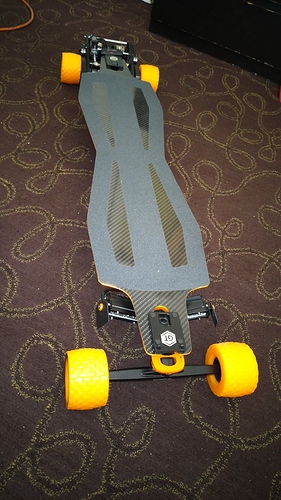 What other factors are preventing carbon fiber from being more widely used in decks?

COST
And if there’s no benefit in using CF compared to fiberglass or bamboo, because unlike on a bike frame or on a hydrofoil, some flex is desirable on skateboard deck, then why would you?

…but you could use certains woods like Baltic Birch with Carbon fiber and obtain a great flexible lively deck.

duuuude did this build ever get finished? what is this like 4 years in the making?

need to build most from scratch. I’m getting there. 'rona slowing things for now.

I have been making my own carbon decks and enclosures for the past two years. there sure are alot of drawbacks using carbon fiber that’s for sure!
like mentioned above a stiff carbon fiber deck transmits a ton of vibrations, radios interfearance and conductivity is just the icing of the cake. things like inserts for screws and such is also a pain in the ass, and depending on construction it for sure can be alot more fragile than a wooden deck.
you also have a lot of desirable properties that you just can’t get out of wood, and that’s why I went from pressing my own decks to making them out of composites. 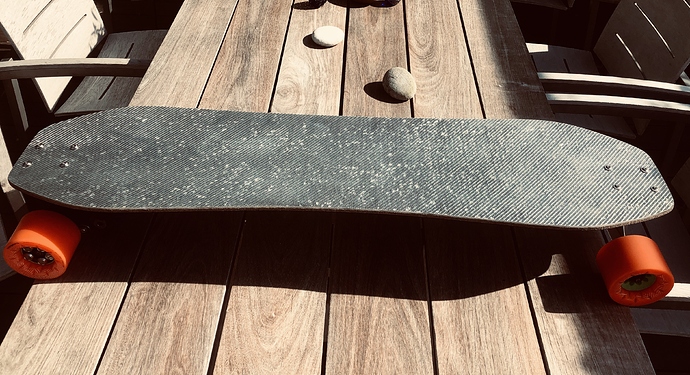 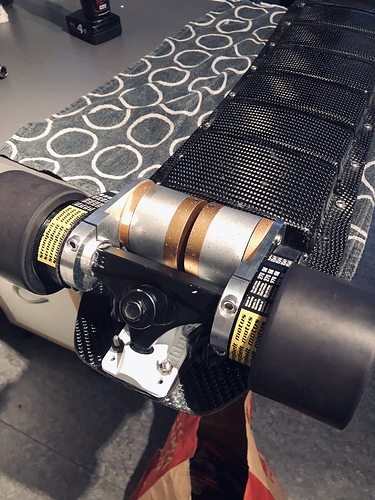 I recently got the bargin of a lifetime when a local guy sold his NEW Backfire “pure” carbon fiber deck and Boosted Mini deck for just $40. Both new because he swapped the stuff to old school childhood decks right out of the box. I’m using these decks with my Mellow drive.

Anyway, I just saw this on FB. A guy’s Backfire deck broke and the inside looks like this. Looks like one layer of CF. I wonder how many layers Hi5ber has because it has zero flex compared to the BF that is really flexy. Hopefully his was just a lemon. 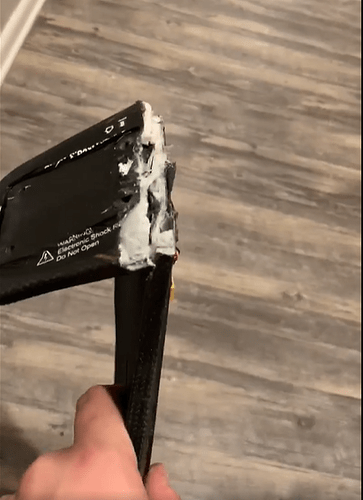 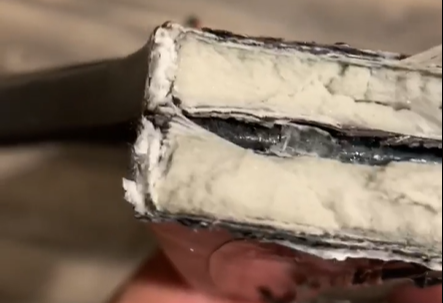 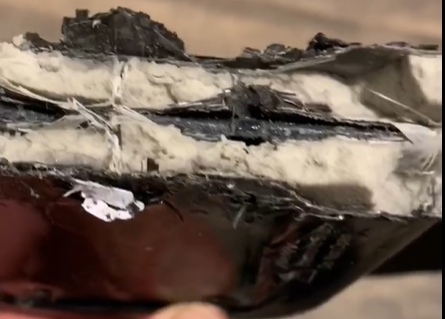