So, my eLofty DD broke down.

I really like the TKP trucks so while I’m making my mind about whether to just replace the hanger and give eLofty another chance, I’m trying to find out what better TKP options are there.

Apparently, the reliability has some space for improvement though.

As for more reliable TKP truck alternatives, I believe Surf Rodz Hex TKP are most commonly used. There are also Psychotiler HeXL trucks but IIRC, there have also been some broken hanger issues, so not considering that one. I’m still unsure if Surf Rodz Grinds TKP is an option for esk8. I believe the hanger profile is different from the Hex TKP and no clamps are available so it’s no good.

Are there any other TKP trucks worth considering?

What else is out there? Any recommendations?

Also, do we have SR Hex TKP sources in EU? Sickboards have some SR trucks, but in TKP they only have TKP HEX 100mm, which is short. Longer SR TKP trucks they have are Grinds (no good?). surf-rodz.eu don’t have TKP HEX at all. 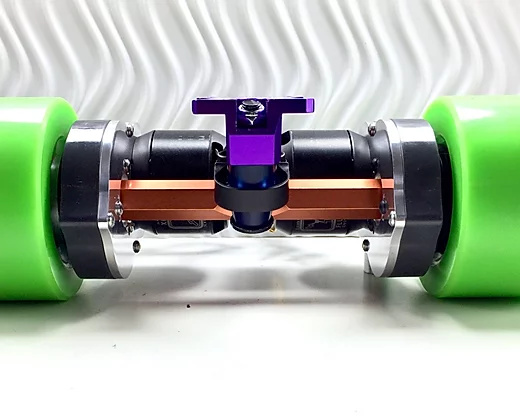 Take this setup for example, this forces you to mount the drive outward (or inward with super small motors). The hanger is pretty narrow (177mm) so it’s very limiting, you’ll get motorbite on 90% of decks without special risers (gbomb). Possible to run angled degree risers on a MTB/Carver deck but again the hanger is too narrow to mount motors larger than 6364 I think

My lycan drive project is abandoned

That’s good info. Thanks a lot. Dual 6355 motors would be just fine for me. I don’t need loads of power. The outward mounting and/or motorbite may be an issue though. Thanks for pointing that out.

My lycan drive project is abandoned

Sorry to hear that. Looked cool.

Much thinker and beefier.

Also, do we have SR Hex TKP sources in EU? Sickboards have some SR trucks, but in TKP they only have TKP HEX 100mm, which is short. Longer SR TKP trucks they have are Grinds (no good?). surf-rodz.eu don’t have TKP HEX at all.

I can’t find anything from the EU.

I also want to know what the sr tpk grindz are like. I think @Brently used them on a lil commuter build?

I also read that @torqueboards is making 160mm cnc trucks

Trucks | What Is Best Size For Small Boards? Esk8 Mechanics

The only difference between the tkp grinds and hex is the roadside shape of the hanger.
It’s rounded on the bottom. Probably so you can actually grind with them.

You may not be considering Psychotiller trucks but he does have super solid tkp mounts for belt drive FYI. Waaaay better than the Boardnamics ones.

They look the same on the site. Unless he changed everything about them. I don’t like the clamps or the plates. @BigZwatt

I think you’re right. It’s only for the BN hanger

So many variables, in my personal experience mostly riding casually at under 20mph TKP is vastly superior to every RKP bushing set up I tried. So carvey and smooth. I’m not an expert in any sense of the word but tkp works for me. Try both somehow and find out. 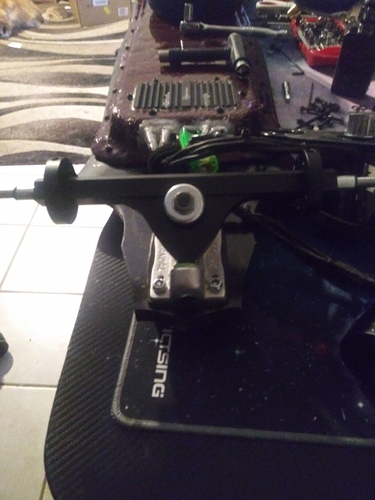 Only for my hangers. It would be easy for me to produce TKP ones of this style but the demand for SR TKP mounts is much less than caliber II

my experience is that for speed you can just slap whatever bushings you like into rkp’s, and they will feel stable - a nobrainer, atleast in combination with a split

with tkp its a whole differend story, after consulting with brad (riptide) i ended up with 3! differend duro’s in my setup to achieve a somewhat similar result, but the overall handling is now infinitely more rewarding

Oh man @Skunk my mistake here I am misrepresenting

I threw some varying krank duros 90 road/93 board in mine and have been very happy.

you are using adjustable bases on an evo. Thats complicating things not the bushings imo

I’ve been riding Caliber II RKP with good Riptide Krank bushings and eLofty TKP with the stock shitty bushings. On my EVO, I like eLofty better, even with the crap bushings. Less stable but much easier to carve with. The deck is also a big factor though. On my Tayto deck, I actually prefer RKP since the shorter deck as well as the higher center of gravity make the board less stable and with TKP it’s already too much on the unstable side whereas RKP is just about right. I still get slightly more maneuverability on Tayto with RKP trucks than on EVO with TKP trucks.

yea i was just about to add that to my writeup

but if you have any other board with a split its basicly the same thing, no?

but a lot of people use angled risers, atleast i hope