I’m not familiar with the Trampa 75/300. Given that it’s not a dual VESC, I take it that I can gang the motor outputs without any thought of special config parameters. That’s what they show on their site.

I’ve just never seen a VESC with 3 sets of battery inputs and 2 sets of motor outputs. The dual motor outputs in particular are what had me concerned.

Thanks for the info.

I thought you’re planning to run dual parallel like the stormcore was user somewhere, but with two MCUs

That’s what I had assumed as well.

Got a thread about this?

[store_icon] Tired of waiting for others to make what I want to use, I made this. ​ [Screenshot from 2020-12-17 04-18-26] If it helps anyone else, it’s here. It’s a tool for programming ESCs, and it also contains variESC firmwares which are compatible with the VESC

I’m running two of these. They are single mcu. The wires are in a tri to handle the current and keep the size of pcb down.

@b264 you got any pics of what your paralleling connection scheme looks like? This is a lot of wires.

I’m ok with using an adaptor for a week long test.

I don’t have any photos. I just made an adaptor with MR60 connectors. If I go inside the enclosure again, I’ll take a photo and add a metr

I’ll have pics before I go to bed tonight.

I’m going with this. 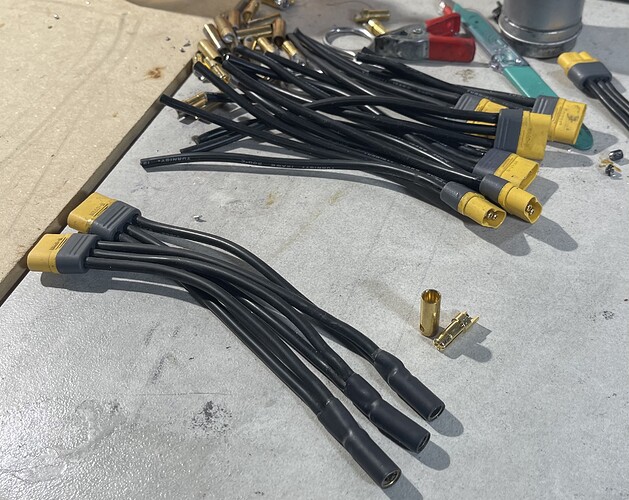 It’s a struggle getting two 12awg wires in a 5.5 bullet connector.

Make sure you load the correct firmware BEFORE connecting those. Technically just before you do motor detection or apply throttle, but to be safe, just do it before connecting them.

Got it. Connectors (for my use case) were more time consuming than I expected.

I intent to use two of my usual packs in parallel (the tattu 6sx2 14ah) to pull the current your firmware intended.

more time consuming than I expected

Dude, this describes all of esk8 building

But just as fun as expected

where is the part there where we are naive about the danger?

I’m nervous that im not limited by my esc current specs anymore.

You want me to design the dual motor @Boardnamics M1 gearbox now?

I’m back with more questions on this FSESC. We’ve got it hooked up and running. It’s on what would best be described as an electric surfboard. It runs, but has some significant problems…

If we run in FOC mode, it gets up to a mid-RPM and then immediately locks up and chatters until you release throttle.

If we run in BLDC mode, it appears to act normally, but will only draw a max of about 35 amps. Also, if I hold it at full throttle for about 10 seconds, it starts to do the sort of chatter you see when it’s having trouble starting. I thought I had all the current settings in order, but I’m guessing I don’t.

Do these symptoms sound familiar to anyone?

The FSESC dual models are not a single MCU / dual motor configuration, they are dual-MCU / dual motor, so they can’t be used this way. You’d need a single-MCU dual-motor ESC like the Unity, Stormcore 60D, or Stormcore 100D.

Which ESC are you using?

This is the same unit I originally started the thread with. I think you’re the one that assured me it’s a single MCU if I recall correctly. 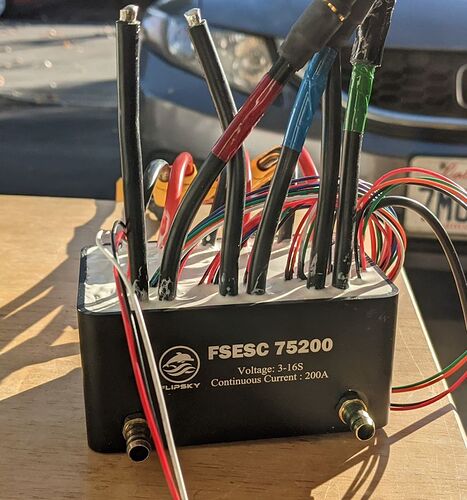 That there is a single channel ESC.

Oh yeah, the thread title is still throwing me off. Whoops