Should I buy a Onewheel Pint?

Is there anyone here that is mildly obsessed with esk8 and them got a Pint and found it to be fun to dork around on? 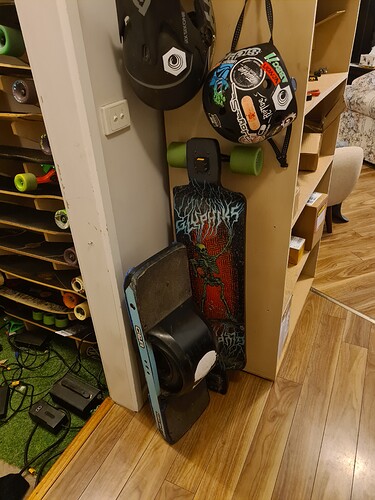 I still ride it, i just dont post about it anymore because you tease me so much

You said it belonged to a friend. What else is a lie? You have the the XR don’t you? The humanity.

it is crazy fun, but not safe for speed riding. Maybe good if you want to teach daredevil kids about responsible riding.

I think there will be a lot of money in printing parts for them now that esk8 electronics are being made especially for boards like them, and have features badly desired by OW owners like advanced ride tracking and GPS…

Everyone I’ve talked to that bought a Pint, wished they’d bought an XR.

I’ve bought neither though.

You can also make one if you can get your mitts on a Little FOCer.

It does belong to a friend. Its just on permanent loan to me

If you wanna build yourself a pint easily, look at the floatwheel kit, it’s nice

OW are like fat chicks, fun to ride until your friends catch you on one.

Then that of course goes along with the idea of making self balancing work with a efreeboard, given you have a footswitch and IMU VESC onboard already.

I rode my friends pint, not a fan of how it rode, squirrely as hell.

This I want to try with the OW hub also, to be clear. But if you put all that on there you gotta shred it.

You get used to it real fast, and it’s a really nice riding feeling, without the remote you don’t have to think at all, and having the hands free is nice, it becomes sort of an extension

I get that, I just don’t think it’s my jam, plus I smoke because I don’t know what to do with my hands while standing, I kinda like the remote.

I ride with a ton of the one wheelers but just can’t get down with how boring they are to ride. I don’t feel nearly as involved, especially in the turns. The whole twisting your legs to turn and not leaning bothered me.

I do appreciate that they are usually crazy fucks who try and take those things where they shouldn’t go. I never see the boosted boiis trying anything fun…

You can also lean to turn, the twisting is only at low speed, it doesn’t do anything when going over a walking pace

If you wanna build yourself a pint easily, look at the floatwheel kit, it’s nice

The complication with the kits has turned me off…

But for now a ready to go out of the box Pint looks more attractive.

Have you tried both the pint and the big one?