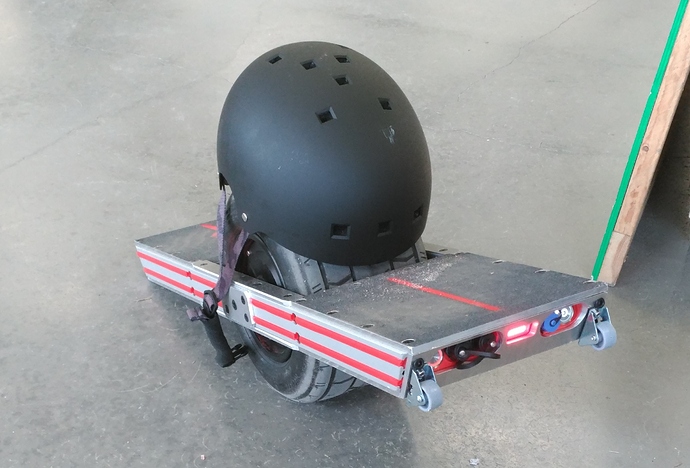 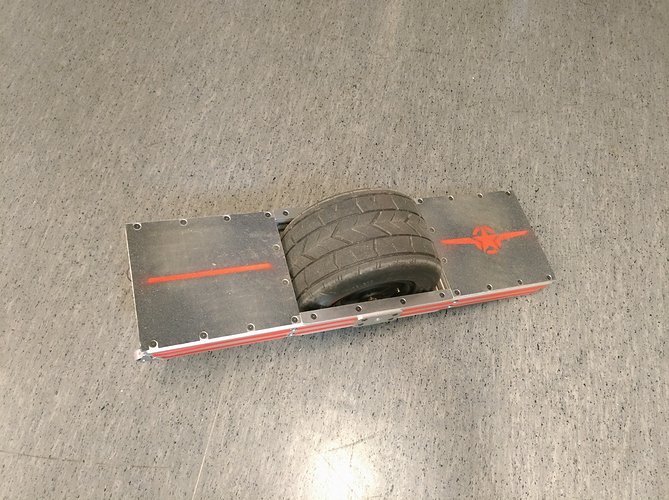 Liar! This is no onewheel! I see 3 wheels lol.

Frame:
It’s all from cheap aluminum plate & aluminum profiles, I was lucky enough to have access to a milling machine so that got used a lot. 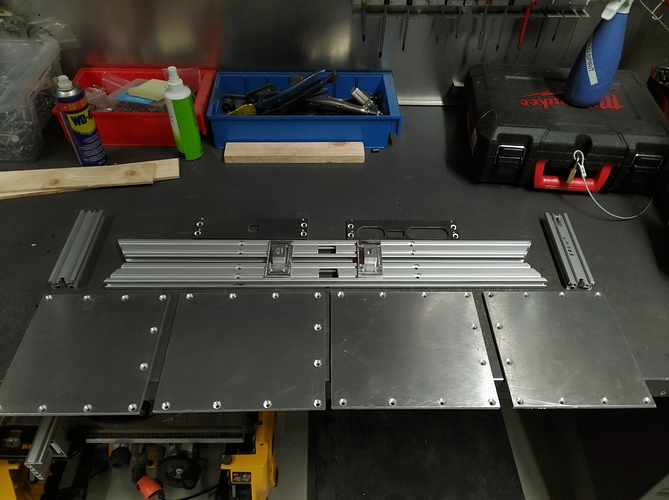 P_20190923_222016_vHDR_On.jpg5488×4096 5.33 MB
Luckily this thing is pretty simple as mechanics go, but the angled front and rear plates caused some headaches, and I screwed up the front one a bit so there’s a gap. But overall it came out good and its very sturdy, which is great considering I want to keep living. 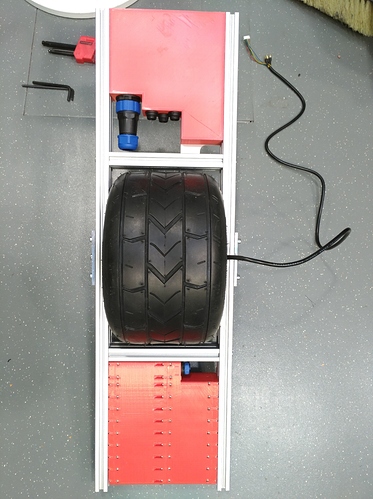 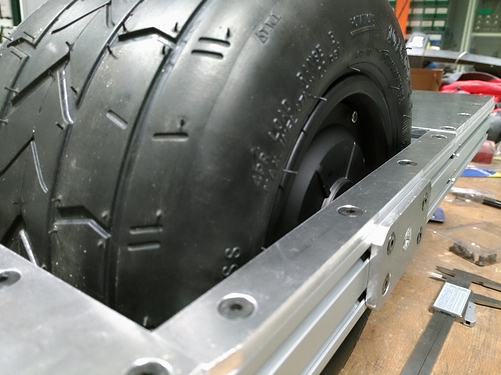 Ssshh… the smaller ones are not wheels, but a rotary emergency antiground support mechanism! They sell those for the actual onewheel and I’ve found them super useful for not eating asphalt.

Battery:
Case is printed from 3 parts, they each have a seal in between and way, way too many little m2 hex screws and nylocks keeping it together. The connectors are 1.3€/pcs from AliExpress and (supposedly) waterproof as well. 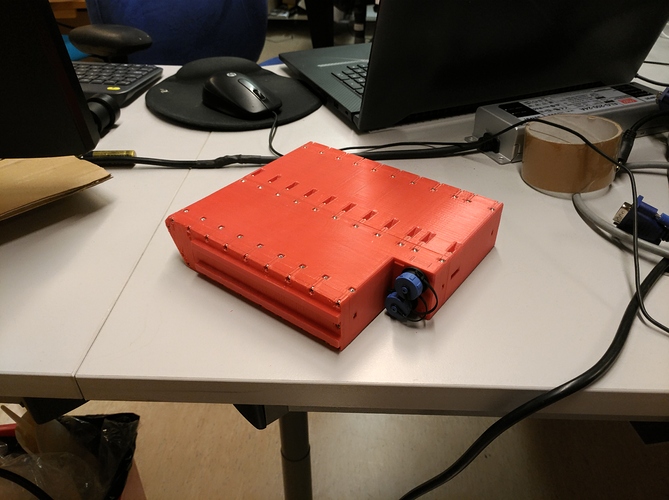 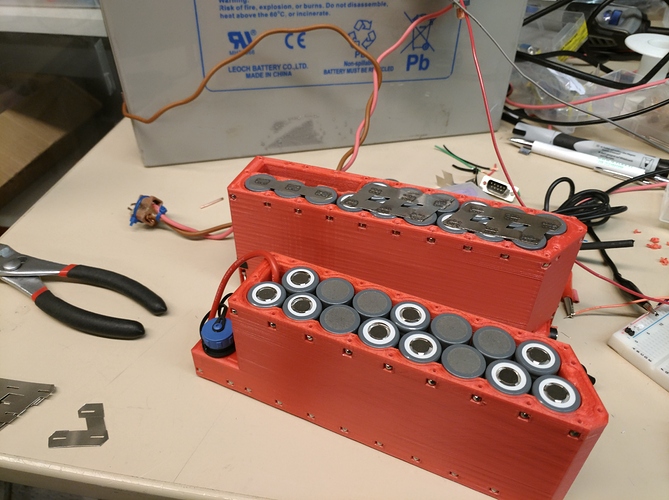 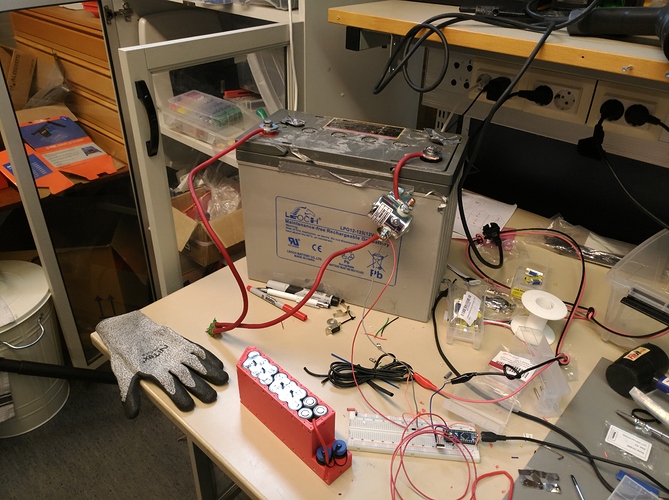 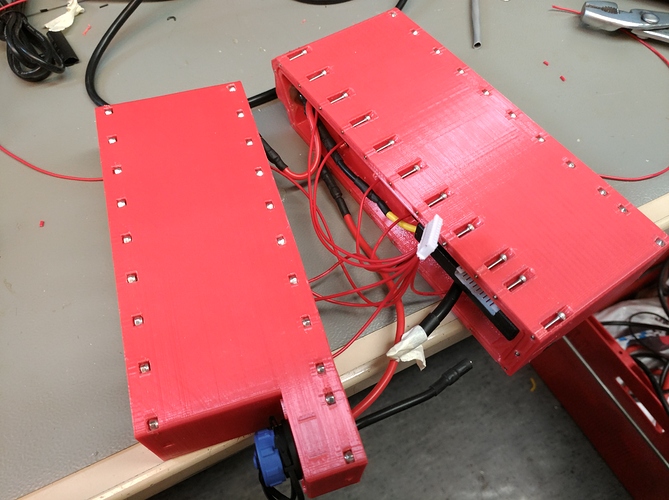 Going by the ratings of the cells should do 18A continuous and 30A peak. BMS is limited to 30A continuous so it’s good there. I wanted to stresstest the battery since, again, I want to live, but didn’t have any good testing load. The solution was plugging it into my DIY e-scooter, setting VESC battery current to the testing value, and riding around with the throttle pegged and adjusting speed with disk brakes. Those got a bit hot: 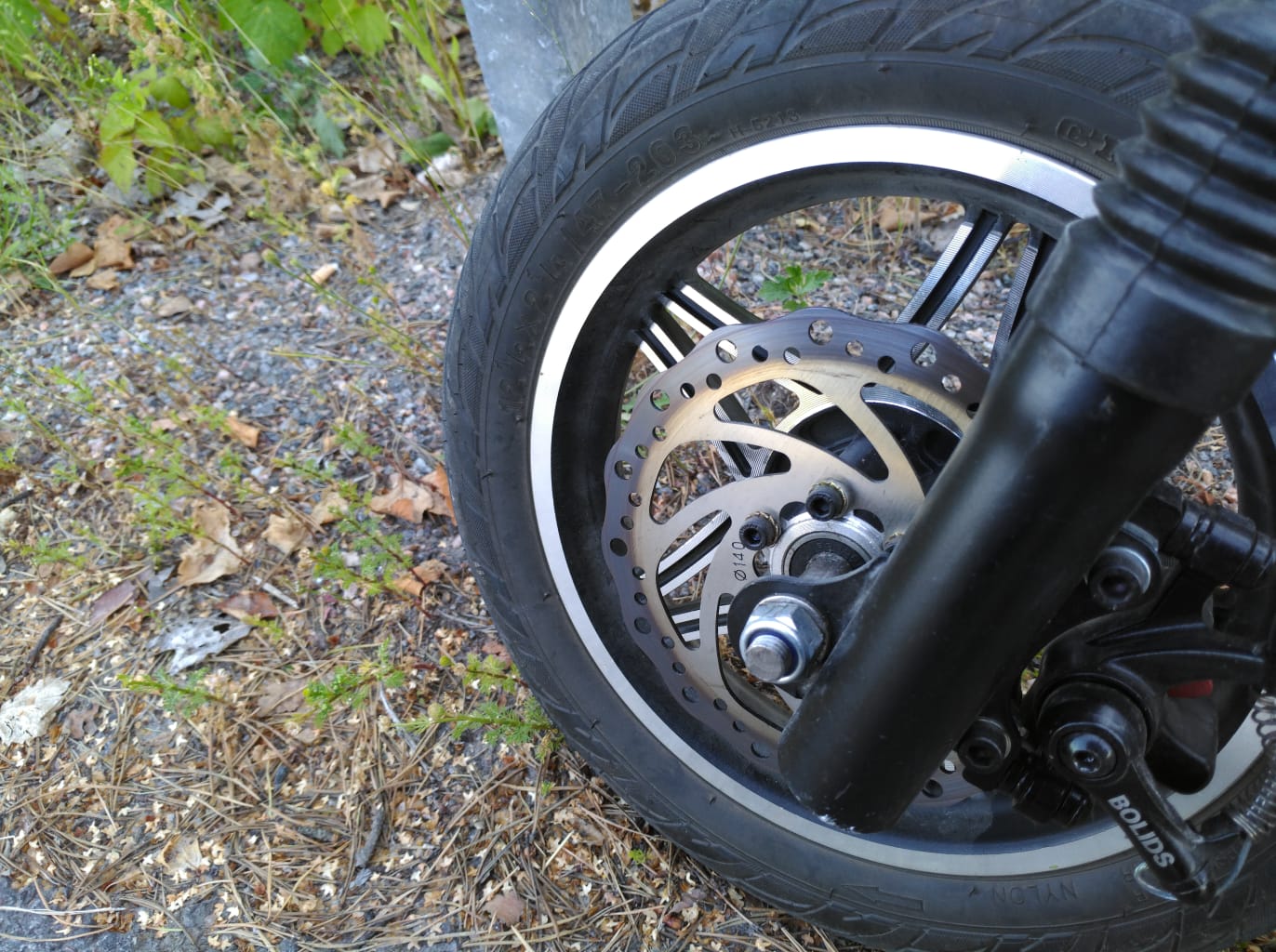 Worked great, battery dealt with continuous 30A current for ~5m, limiting factor was the cells getting hot. The onewheel won’t have such loads anyway, so great!

Electronics:
Drew up a PCB in KiCad and ordered it off jlpcb. The box is printed as usual, and quite annoying to put together as it’s just barely big enough. The FOCBOX is under the white plate. 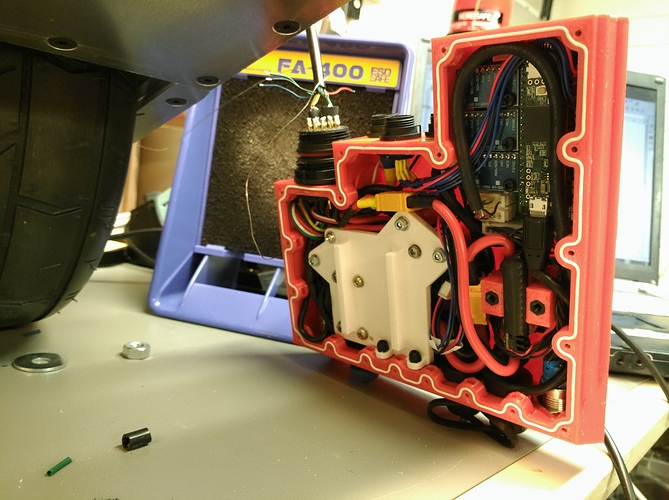 This beautiful illustration shows what goes where. It was made at a time when I was more optimistic of how small I can make the electronics box.

I started this project before VESC got the balance app, so I’m using a separate processor, the Teensy 3.6 with 3 MPU9250 IMUs. I need more parts, space and a bunch of custom code to do what could be done by ticking a box in VESC tool now

Nevertheless, there’s some advantages too. I can throw a lot more compute at the balancing code as the Teensy’s processor is faster than the one in VESC and doesn’t have to run all the VESC-y stuff. There’s 3 parallel madgwick filters, one for each of the IMUs. They and the IMUs all have slightly different filtering and sample rates, and if one fails it’s still possible to continue on the remaining two that produce similar data.

The front panel has a bargraph led used for battery status, power button, USB connectors to program both the VESC and the Teensy, generic RGB UI button to trigger accelerometer calibration testing modes or changing what the bar graph shows, that sort of stuff. 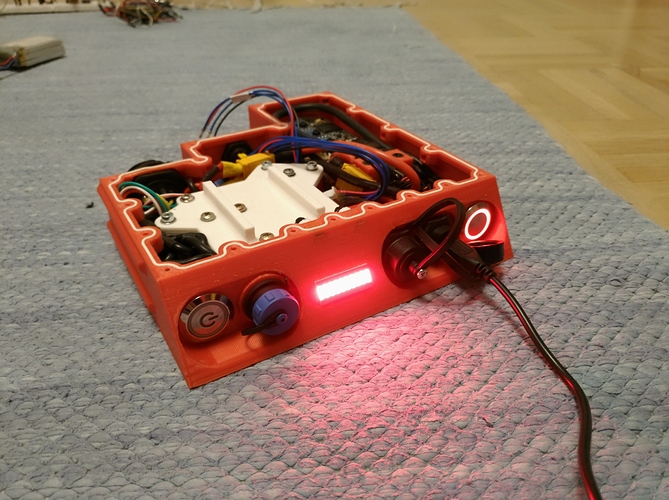 There’s a trio of powerful piezo speakers under the IMUs, so the thing can beep status information back at me in addition to pushback. Pushback on these onewheely machines basically means that it’s about to run out of balancing authority for whatever reason, be it overspeed, low battery, lack of power or whatever. This one beeps out a different tune for all of those cases.

Velostat & copper tape, since I’m cheap. Velostat is a packaging material that changes it’s resistance when under pressure, which is great for building pressure sensors. I started out experimenting with multiple layers of Velostat between copper tapes, but stumbled across a better design using a thin plastic spacer in there by NuRxG from the old builders forum onewheel thread. 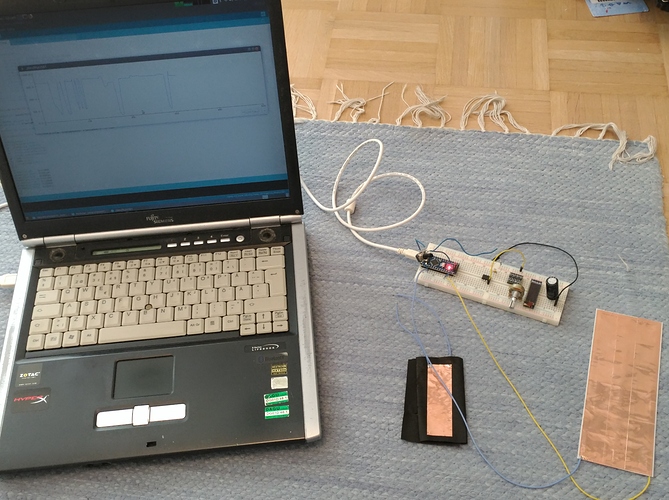 That black stuff is Velostat cut to shape. The sensors are built by stacking tape-velostat-spacer-velostat-tape so that the bottom and top tapes don’t touch, and hold the whole thing together by the edges of the spacer. 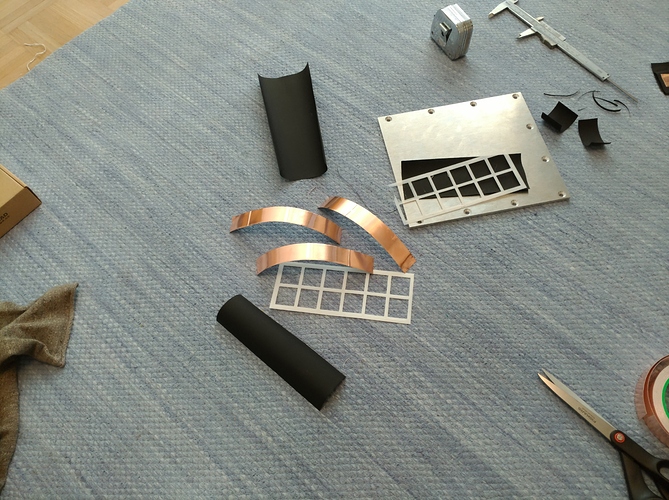 P_20190928_160829_vHDR_On.jpg5488×4096 7.6 MB
Since I still want to live, I wrapped the whole thing in contact plastic to protect it. If these fail “open” while riding, it’ll cause the board to cut out. If both fail “closed”, it’ll cause the board to take off to the sunset, so I hope they won’t fail. They should be protected well under the griptape and plastic, but this is the part of the build I’m most paranoid about. 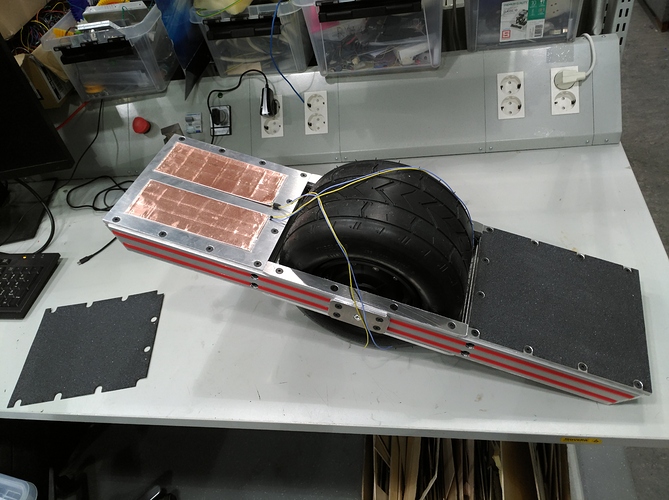 The sensors are basically variable resistors, they are one half of a voltage divider the Teensy uses to read their status. There’s two of them, and they are used in the same way as the “real” onewheel.

wow this build thread is like an instructables but actually good.

you did some great work! Tons of people will learn from you I hope.

The board works fine, has been reliable and very fun to ride. There is one big issue though. 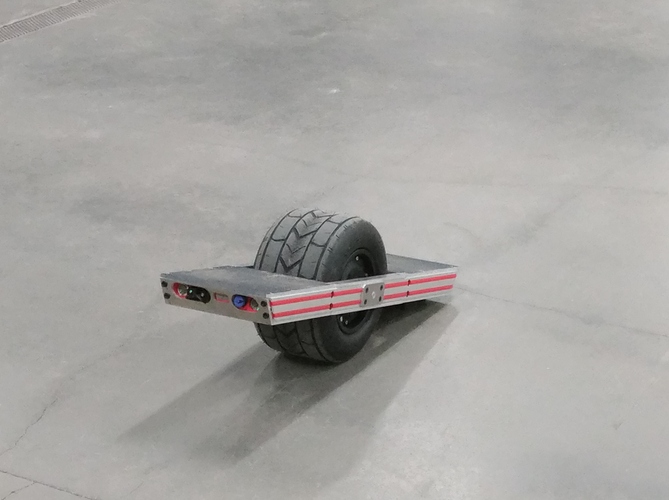 And that is speed! I got the Phub-188 motor from Aliexpress in the 24V version with the idea that i’d reach ~25-30 kmh with the higher voltage from my 10s battery. Turns out, the kV of this motor is really low, about 10. This motor comes in 24, 36, 48 and 60V versions, and I read from somewhere that the 36V and 48V versions are actually identical. I’d bet that the 24V version is too. 10kV means my top speed is only about 16 kph, which is pretty slow. The motor doesn’t even get warm so it could be pushed a lot more, but it’s simply not possible with the kV and voltage I have now, the VESC goes to max duty cycle but the low kV motor simply won’t draw more current. I’d need more voltage or a higher KV motor to actually get the power out.

I’m thinking of making a 12s pack, but getting the speed to 20kph doesn’t feel worth it. What I’d really need is a version of this motor with twice the kV. In the meantime, it’s a fun and agile board to ride around and commute with.

Some extra info for those that are interested in this sort of stuff:
The teensy talks to the VESC over serial with this library: 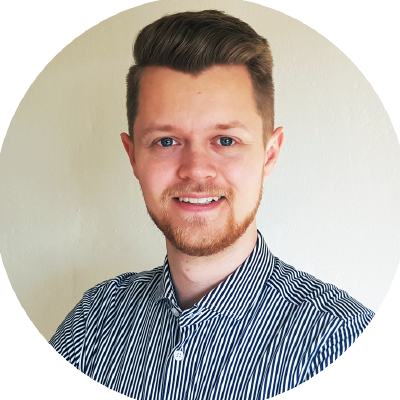 
Focbox is in sensored FOC mode, max current 30A battery and 30A motor.
I’m using the Madgwick filter implementation in Teensyduino to get the orientation estimate, and Bolderflight MPU9250 library.
11 Likes
Jopj October 19, 2019, 10:40pm #11

Thanks!
I suspect this machine will be the odd one out in the near future. As the balancing app in VESC improves, there’s little reason to take the separate processor route I took. Although, it’s easy to me to add a ton of ws2812 LED’s for the blinkys, I’m thinkin replacing the red side stripes with those

I’ve been following the various DIY Onewheel projects in the other forum, it seems that the VESC balancing app was a break through, after that came out I noticed some of these projects got completed. Since everyone is using this same kart hub motor I would assume they are all limited in speed at this point, that seems to be the next hurdle to overcome until this is practical. Hope a solution for that comes up.

This is amazing, nice work dude!

Yes, although I suppose it’s possible PeiPei actually does make different KV versions and I just got sent the wrong one, I’m interested in how it works for the others using this motor. I didn’t have much luck getting info out of the manufacturer, their answers to my questions on what the KV is for the different versions were on the level of “yes”.

Redstar doesn’t use the VESC balancing app though, but it doesn’t matter for the motor.

Amazing to see a onewheel build thread finally. I totally plan on building one of these once there are some real proven builds that I can wrap my head around

Go for it! The VESC balancing app makes the software side much easier than I had it, and then it’s just bolting a hubmotor to something you can stand on

I’ll have to figure out something for foot pads.

I have a friend who is great with wood working. Would be cool to have him build a frame

The velostat-coppertape design isn’t too hard to make, and using a bunch of force sensitive resistors would be a more expensive, less DIY option. Of course, if money is not the issue, buying a spare onewheel foot sensor would do the trick very well too.

Nice build brother. I’ve been wanting to see someone tackle a diy onewheel. Marvelously executed my friend. I applaude you