As I get close to finishing my pneumatic wheels, I’m wondering why the E Sk8 industry seems to stick to the 8mm and 10mm axle standards. I get the trucks are those standards and it’s what’s been used on skateboards for decades, but it seems like a lot of Esk8 businesses and such are making their own custom trucks, etc. So why not use something beefier for pneumatic tires? With the speeds being achieved, it seems to me like a beefier truck/axle would be safer and hopefully more stable. Particularly at higher speeds.

The channel trucks you see most pneumatics on are mostly 12mm actually, I haven’t seen an 8mm axle for pneumatics, and 10mm are for the most part only found on DKPs and some RKPs.

TLDR: Because we argue for selfish reasons.

In the premium DIY / Custom ESK8 space, I am in favor of creating manufacturing standards to create a marketing as well as a practical advantage over the flood of generic mass market builds. The standards could define many things to allow compatibility, interchangeability and longevity. I am curious what others think about this.

like @frankthedragon said, anything larger like mtb channel trucks, lunas, apex airs, etc have 12mm axles. The 12x28mm bearings are really durable and last a damn long time in my experience. The higher end/mtb hubs all have 28mm bearing seats to accommodate the larger bearings. This includes trampa, mbs, newbee, hooverrims

, lacroix, and whatever else,

A lot of eskate is small e big SKATE, both in terms of the origins of the devices and the people riding. You can make the case that our use has different requirements and I’d sometimes agree, but for most boards it’s more convenient for both the customer and manufacturer to maintain compatibility with existing parts. For big ol things like a MTB yeah it’s very very hard to make the case that standard skate parts are a good idea because the demands are weird, and also there wouldn’t even be much advantage in being able to put 80mm urethane wheels on it. For something in the realm of a boosted board though, that line isn’t so clear, and it’d be a pain in the ass to change

Good points. I didn’t realize 12mm was being used. Just recall seeing MTB guys trying to get air, and I thought what a bad idea on 10 mm

Also keep in mind that for half a century street skaters have been hammer the crap out of 8mm axles ollying off of and over everything they could find. That’s a crap ton (metric, not imperial) of force going into those axles and the majority of times they didn’t skate away from a landing it was because they snapped the deck rather then bent the axles.

That said, I stick with 10mm axles, because its an available option for my choice in trucks. If everything was available in 12mm just as readily (thane and pneumies) I’d probably have gone that route just to keep everything one size for when I add in a mountain board (after leaving Florida,we have no hills let alone mountains)

Agreed, but those skaters aren’t hitting misaligned concrete joints and such at 35-40 mph… that was the crux of my thought - ESk8 seems very different from skateboarding in my opinion.

Good cast trucks have a solid steel core from wheel to wheel but cheap cast and CNC trucks are mostly aluminum, sometimes the casting shears and other times the CNC hanger bends

Biggest issue I’ve seen is with axles that are separated from the hangar. Axles IMO should be continuous through the hangar.

There’s both good and bad to that. I imagine that thicker axles wouldn’t work going through the hangar because it’d interfere with the bushing cup. They already stick out on many of the cast trucks out there like Paris and Caliber. 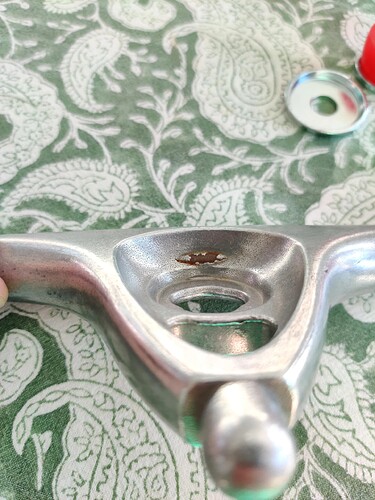 Couldn’t that be fixed with a few mm more rake?

Running an axle through any machined hanger is extremely expensive. A precision bore has to be gun drilled through the whole hanger + the axle must be long and straight enough to be put in. Much dinero.

The most common failure point is right where the axle comes out of the truck anyways.

Agreed, it seems more like a way to strengthen cast trucks as it would be relatively simple to add the axle before pouring, and should be unnecessary when dealing with machined components as they’re naturally stronger already.

Look at how much abuse bike pedals take and how they are attached to the crank…replaceable axles are plenty strong if designed properly. This is an example of a well designed 8mm axle by PVD designs. 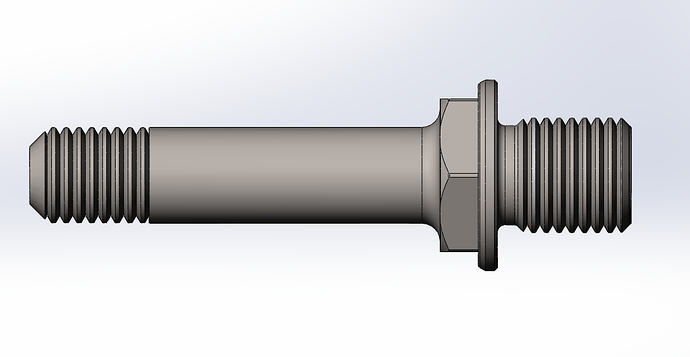 Personally for pneumatics, 10mm minimum and 12mm is preferable.

Why are the threads not spiral shaped?

Cosmetic callout in Solidworks saves time over a spiral cut