I’m honestly thinking about picking one up at this price as a second board, as my old secondary board took a shit on me awhile back. Right now they’re also letting you swap out the deck for the Forged Carbon version for free and that forged carbon deck looks NICE.

This thing is obviously HEAVILY influenced by the Metroboard X, but basically in the smaller form factor and brought up to modern standards.

I’d love to hear what some of the vets on the forum think about this thing, especially their new ESC, looks like a massive upgrade over their old one.

it is really too bad they copied the Metro board design…
they could have made it their own thing with a few tweaks and make it cool.

I will be interested to see how quality and performance pan out.

This combined powerbutton, display and chargeport block looked smart.
Would be nice if could buy something like this without the complete package.

You can buy just the deck that comes with the “Charging Docker” as they call it.

Deck is pretty insane, honestly. The forged carbon is gorgeous and it’s the perfect size at 39.4" long, IMO.

The shape of the deck is actually a fair bit different than the Metroboard X when you compare them side by side. It’s also way shorter at 39.4" long instead of 47".

To bad it has to be used with propietary remote.

It doesn’t have to be used with a proprietary remote? It looks like it comes with a VX2 and you can use any remote you want.

Look at the “Land Cruiser Deck” link that I posted 3 posts above yours. That shows the Forged Carbon Fiber version of the deck.

The battery pack says only “Panasonic 21700”

This is like a car dealership selling a “Ford SUV” without mention whether it’s a Bronco, Ecosport, Edge, Escape, Explorer, Expedition, or Flex model.

Yeah, I was on chat with them earlier and he mentioned the BMS is capped at 70a, and that the default ESC motor settings are set at 30a per motor. Although, I imagine that should still be more than enough, I’m not one to try and kill myself. He also told me the new ESC is rated for 100A continuous.

If I were to part out a build I’d probably go with the deck, trucks, motor mounts, and guards, and then get a 12S4P P42A pack built, the BKB Xenith V2, and some 6374 Flipsky Battle Hardened motors.

They’re the standard 4800mah Panasonic 21700’s being used by a lot of Chinese prebuilt manufacturers nowadays. Same ones Mooch tested not too long ago I believe.

Looks like I was wrong, their new ESC is rated at 100A continuous per motor, not 100A total. So, their new vesc is rated at 200a continuous. Oof, I’d probably go with their ESC too since it mounts to their heatsink, then I’d only need a battery and motors.

So, I was talking to Cato from Boundmotor, looks like they’re coming out with a 100A rated P42A pack. He let me place an order for a board that’ll ship with that pack in a few weeks when that battery option is ready to go.

I wouldn’t touch Boundmotor with a ten-foot pole since the Jedboards connection.

They even did copy the heatsink design 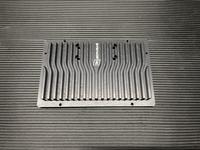 Oh boi that’s pretty damn impressive, if I had a friend with $1600 I’d send them to that far before I’d recommend building unless they really wanted the build experience

What Jedboards connection? Haven’t heard anything about this.

Nothing more to say

Jeremy bogan has his hands in the esk8hubs brand. The Link in Esk8hubs instagram page redirects to boundmotor. Jeremy = boundmotor? To what extend? Did he just help them like he did with Jed…i mean Jeff edit: here’s what i posted. Currently listening to @samjadelaide podcast where he mentions Jeremy bogan having his hands in the esk8hubs brand which redirects their instagram link to Boundmotor. Has that been discussed yet?