Motor kV ratings being off, how much is tolerable?

I’ve read quite a few topics about kV ratings but have not been able to find an answer as to why the differences that I’ve found between labeled kV rating and the actual kV of motors can be so big that the motor should simply have a different rating.

I started my new build, planned everything carefully and decided to get Maytech 190kV motors. They should be a good fit for my planned 10s battery. However, the ERPM and therefore the top speed seems to be much lower than anticipated. I started testing a bit more and figured it should be possible to approximately achieve the maximum ERPM the rating should be able to do when there is absolutely no load, so no wheels and not even gears.

Surely, there’ll be a small loss but that should be calculated in the rating. As it turns out, with a full battery (I have to be honest, it was only 41.9V) the motors capped out just above 48000 ERPM (again, no wheels or gears, just the motors whining).

I understand that not every rating is perfect and there are small tolerances, but I would expect this to be a “slightly higher than spec” 170kV motor and not a 190kV motor. I asked the reseller where I bought them and he did some testing on different sized and kV rated Maytech motors as well. Seems most Maytech motors fall pretty far below spec with some motors being labelled 210kV having 190kV ERPM values and some 190kV motors that have similar ERPMs as 170kV labelled motors.

I can imagine some motors get a wrong label by accident. There’s no real price difference between different kV ratings, so there’s no advantage for Maytech, still I see only the kV rating fall below spec and not go over it. I think it’s ridiculous for a motor to be that far below spec that it actually falls in a lower kV rating. If I want 170kV motors I’ll order those and if I want 210kV motors I’ll order those as well. I just want motors that do what it says on the box.

Are your motors performing according specs or do you see this phenomenon in all brands? How much of a tolerance is acceptable?

10% is reasonable imho. There are a lot of factors at play.

Not sure if there is an industry standard.

You could probably weaken the magnets somehow to raise the Kv a tiny bit, maybe put some steel epoxy between them?

And I don’t even know if 10% is their official spec, but for a lot of non-automotive-grade electronics components, 10% is a very common error margin.

I know, I’m just saying they could simply try to produce a 190kV motor and in whatever category it falls when testing, sell it as such…

When you produce a 190kV motor and it performs at 170kV you can simply sell it as 170kV as the price is the same. Therefore it makes no sense to sell a 172kV motor as a 190kV motor.

10% is a very common error margin.

And for Jason Potter and Jeff Wu, they like to take to the next step by adding a 0 at the end of that 10% error margin

When you produce a 190kV motor and it performs at 170kV you can simply sell it as 170kV as the price is the same.

The price isn’t the same, now they need a whole 'nother line in their factory for Kv testing, and 7 more SKUs in their inventory, which adds tons of overhead. This kind of stuff will raise prices a lot.

And we all know what people look at when shopping for motors. Usually, it’s not quality or Kv accuracy. It’s almost always “price”

They would go under, in favor of the next factory that didn’t do all that testing.

The funny thing is, Maytech sells 170kV, 190kV and 210kV. But until now, they all test below spec, some even an exact category lower.

Isn’t that why we usually set it to 80% efficiency during the calculations though? I could be talking out of my ass, forgive me

My suggestion is to raise your expectations then and buy a 210Kv motor.

A lower Kv is often an indication of a higher quality manufacturing anyway.

pinging @hummieee, we need to hear from you

Oh yea that’s during operation is that even considered. Damn, isn’t @Agnes_Maytech here?

I would have, but 210kV was too high according to my calculations. I wish I would have gotten those.

EDIT: but then again, I could have gotten those if the 190kV motors went 10% over spec, which, apparently, they never do.

So what is this guy doing then, putting the wrong fucking label on my motors? Or testing for no reason whatsoever 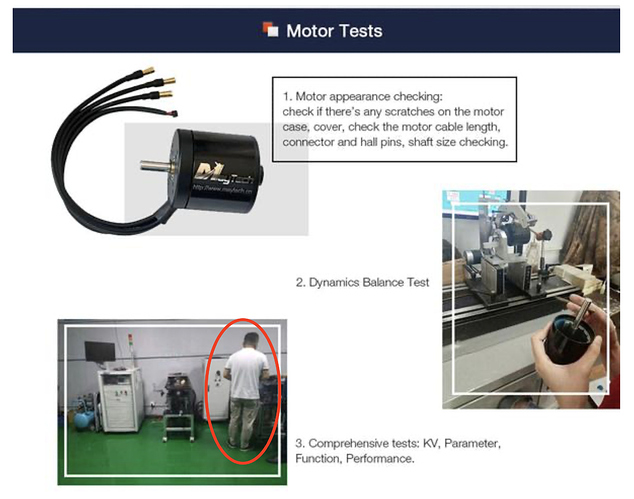 Makes u further question their wattage rating. They should get a pic of a guy in the Arctic up for that.

Maybe u could add another cut on the shaft and move the rotor further away from the stator for a higher kv. And have to move the pulley too but that would work. But put side loading on the bearings but they should be fine with it.

You did that measurement on BLDC or FOC?

You did that measurement on BLDC or FOC?

a werd to the wise…

Or even better spin it with another BLDC motor