I would gues if you ask Kaly with the order number for the board he have the code stored maybe?

Just wanted to pay my respects to @Kaly here from a non-fanboy POV.

I tried the XRL at the weekend (at a closed cycling circuit in the UK) and I have to say that this is the board that I mostly quickly gained confidence in riding at a fast pace, all the while being able to carve while riding slow.

Very well designed and built. I’m genuinely impressed. The only downside is that the board weighs an absolute ton, but this is not a board to be carried around… it’s a board to be ridden all the time.

Glad you feel this way.
It has taken some time but we are there

What totally innovative product have you bring to market ?

Every time I come around, is the same old same, creeps come out of the cesspool

How about you innovate some integrity and take care of your customers properly.

Every time I come around

You’d have a much better time around here if you did the aforementioned above. Plenty of good standing vendors here have no issues getting a long with the community.

You wanna explain some context of what happened

I can assure you there are plenty of vendors that are well regarded on ESN.

Ernesto is an insanely mixed bag, seems to like playing favorites and ignore customers regularly. Dodging people who have problems and going out of his way to help others.

But that comment above was in reference to a couple instances of people being able to show up to his shop with cash and go home with an XLR same day, while others are still waiting for their preorders over a year ago.

Also some interesting posts here and there that he’s willing to build crap just to get it out the door. Like an owner finding their xl2.0 had a 12S4P 50E battery pack, which is not the cells advertised nor an acceptable cell to use in a 4P pack for anyone who’d like to be respected as a builder.

Also some interesting posts here and there that he’s willing to build crap just to get it out the door. Like an owner finding their xl2.0 had a 12S4P 50E battery pack, which is not the cells advertised nor an acceptable cell to use in a 4P pack for anyone who’d like to be respected as a builder.

Wait what?!?! This was you? Hoooooly…that was a stock Kaly?

Word OE kaly 2.0 with m50 cells or whatever. Sags like no tomorrow off the line. That’s at a full charge…

Putting p42a in soon. Got the pack just need to redo the bms headers done the 2 packs use different parts

He also said the XLR was gonna be 20s 8p and quietly said nvm on an instgram post and changed it back to 18s 8p nearly a full year after he started taking pre orders. And as far as i know the page still promotes the board as 20s and its 18s. 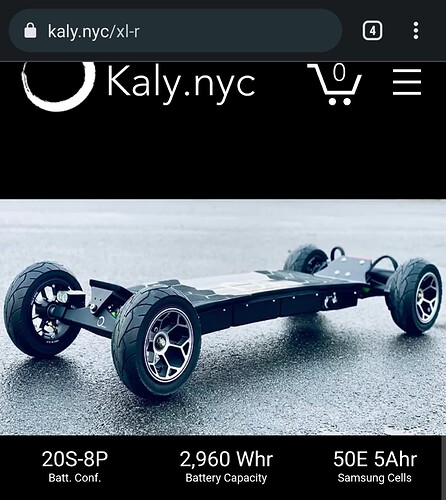 Yeah this one is really confusing too…but I think it might actually be 20s. I had a customer purchase an 18s charger for his soon to arrive XLR, he wanted something that was a bit smaller than the stock charger that comes with it, and long and behold…his XLR arrived and was 20s

atleast according to my customer

So now I gotta get him a new charger…

Thats what i heard as well, must have got switched recently

The plot thickens cause another page says its 18s too.

i think just goes to show what alex said there seems to be a lot of inconsistency in whats leaving his shop. 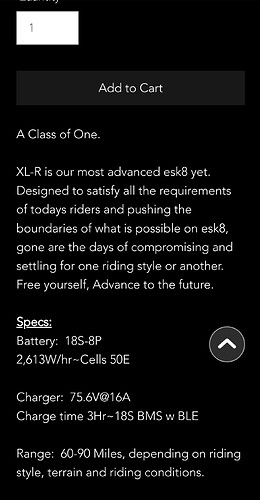 Just gotta be thankful we get anything apparently

i also absolutely demolished your XLR in both off the line and top speed down in SD
proper rider top speed, no freespin pussy shit here

with much love, glws
-new kid who just joined the cesspool