Somebody out there has a (zoomable/scalable) world map or alike to find out where esk8 is legal (and if so under which conditions) or illegal (sure, we don’t care)?

It’s kind of an evolving topic lots of places.

Many people don’t know they exist still, so passing regulations would be hard. 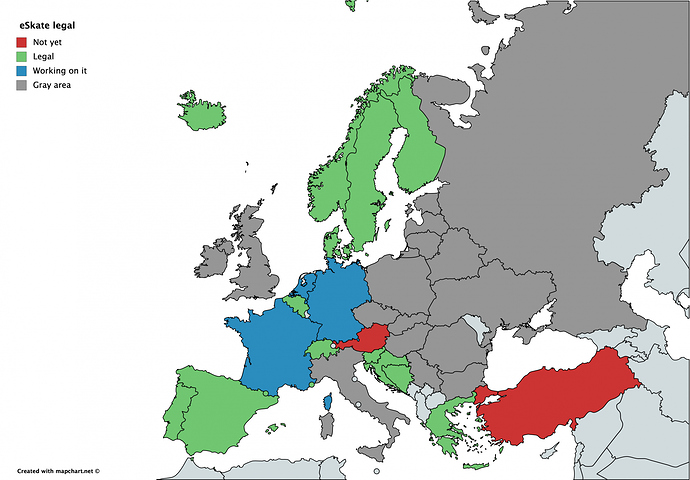 Here’s a list, but it is far from complete https://www.ridefatdaddy.com/are-electric-skateboards-legal-in-your-country-check-with-our-list/ and at least partly not accurate, e.g. Germany is illegal

America has people causing much larger problems than longboarders.

Sweden is 20km/h and a max power of 250W and is essentially classified as an electric bike. If you have one that is push powered and only assistance you can do 25km/h.

In Germany low powered scooters and everything with handlebars are legal if you have a registration, number plate and insurance. That doesn’t apply to skateboards though (no handlebar). But politicians promised to include them as well in the future (but how much fun will it be with a number plate and like 500w max power)?

Map shows a grey area in Ireland, but the law is clear unless its a 250w electric and human assisted pedelac, it’s a motorised vehicle. Tax and insurance and vehicle type approval required to use on the roads. So basically you can’t use an electric skateboard in Ireland. Weather the police enforce it or not is a gamble, they are certainly prosecuting scooter users, notibly when they are doing stupid things, like driving on a motorway, or crashing into Dublin trams… But definitely illegal here.

“Politicians promised to […]” that means it is not going to happen in Germany; moreover, Germany is largely cut-off from modern developments like e-mobility and digitalization

Let’s not get political, but I wouldn’t bet on it either. Especially because the experience with e-scooters isn’t very promising.

Inside the city limits of Saint Louis, Missouri, USA it’s totally legal with the exception that in the “Downtown” neighborhood, you must be using it for “commute” and not just popping tricks (the laws were written when sk8 wasn’t electric yet). Outside the city limits in Saint Louis County things are a little grey.

And yes, I have been stopped by police downtown and asked if I was “going somewhere”. I responded yes, of course. Not only because I was actually going somewhere, but it’s not legal if you’re not

California is California so it’s basically legal throughout the state. They do have limitations on speed, require lights at night and a helmet at all times

… thanks for spreading the knowledge from Saint Louis; enjoy your freedom and happy riding!

but it’s not legal if you’re not

Aren’t you technically always going somewhere? What kind of backwards ass shit is that lol!?!? So they basically outlawed esk8 “joyrides”?

So they basically outlawed esk8 “joyrides”?

The law was written to prevent folks popping tricks on unpowered popsicle boards in the central business district.

Oh so cool for you, well at least you have shit weather, bad laws, and fat women… Oh wait, that’s not Cali…

Weed is also legal but you pay up the ass for everything and good luck finding an apartment close to wherever you work. Plus drives take forever between 6:30 to 10 am and 2:30-6:00 pm. Doesn’t matter where you’re goin… honestly its small gripes for such a great place. I fucking love it here lol