This was built in April 2019, just shifting the build thread to here.

Ok here goes. I have a big AT board weighing at 14kg, and might be heavier if i increase my battery size or get bigger wheels, so i’m thinking of making a lightweight, short-ish range pneumatic board.

Here’s the items i chose

@avX AT gear drive for the Haggy parts

Riptide tunnel risers and an assortment of accessories like bushings, pivot cups and so on.

Enclosure came first so i worked on it, stripped the black paint and did my ol usual with truck bedliner spray 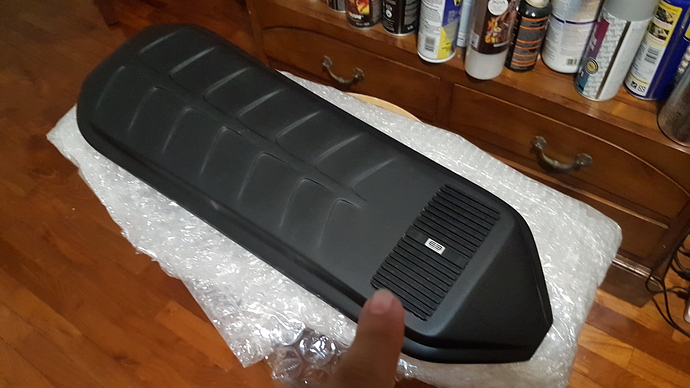 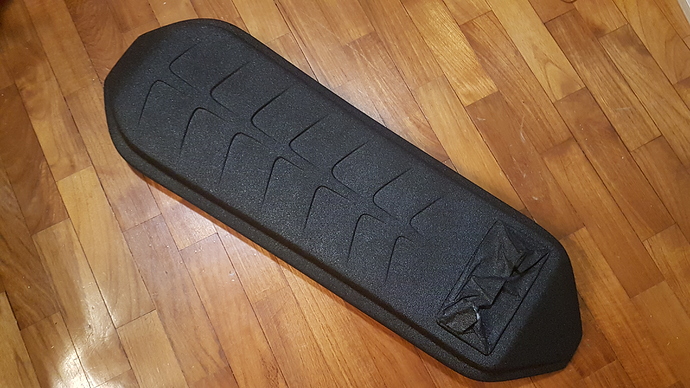 Then came the deck. I got it from someone locally who initially bought it to use on a downhill set up, but he ended up selling instead so i swooped it. 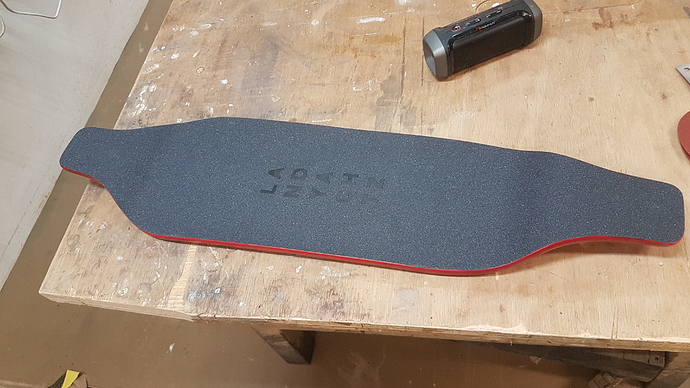 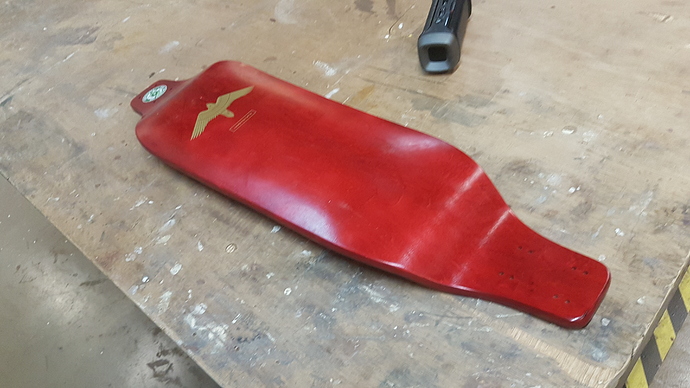 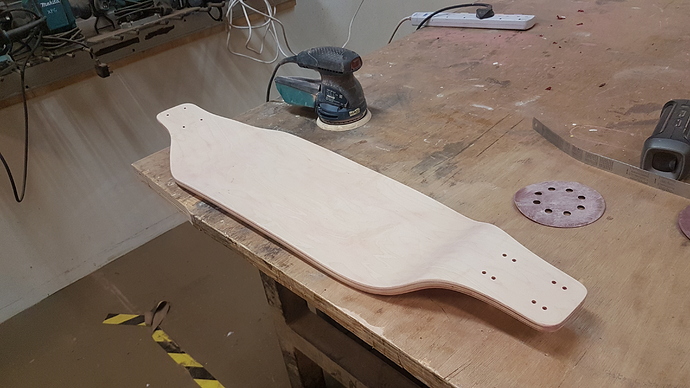 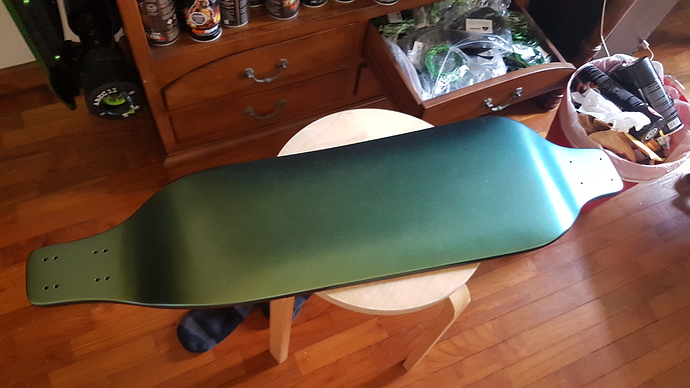 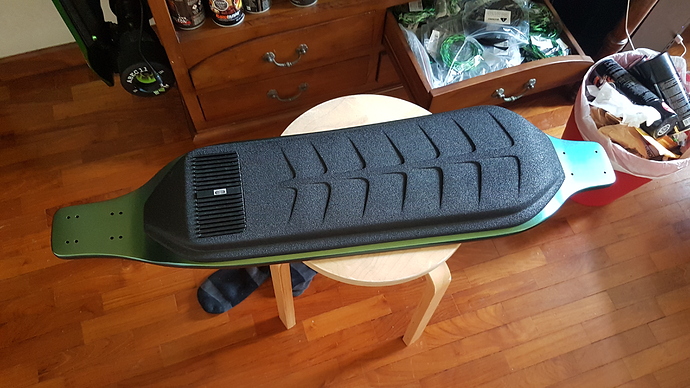 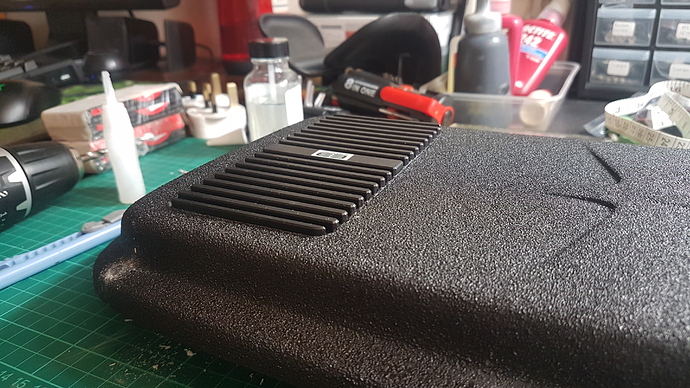 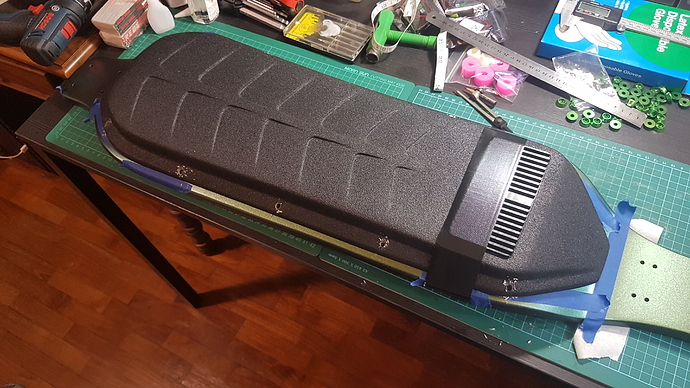 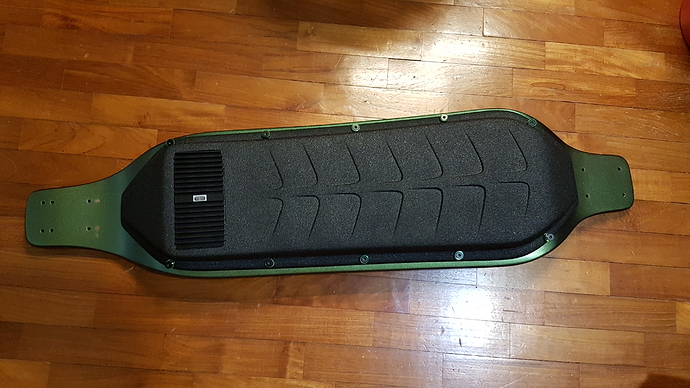 Then comes the drive system. I’m using Jeff’s AT gear drive designed for the Kahua trucks. This model is now known as the MK1 design. 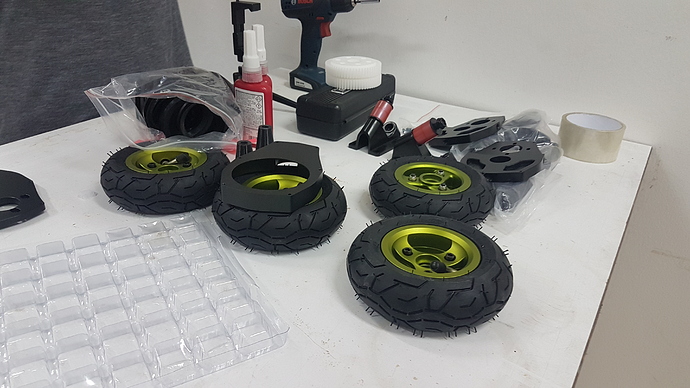 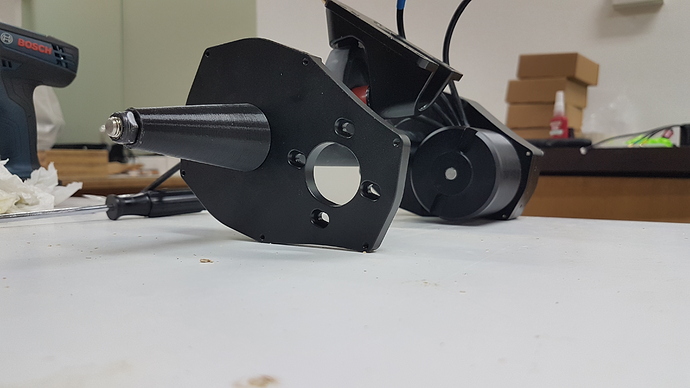 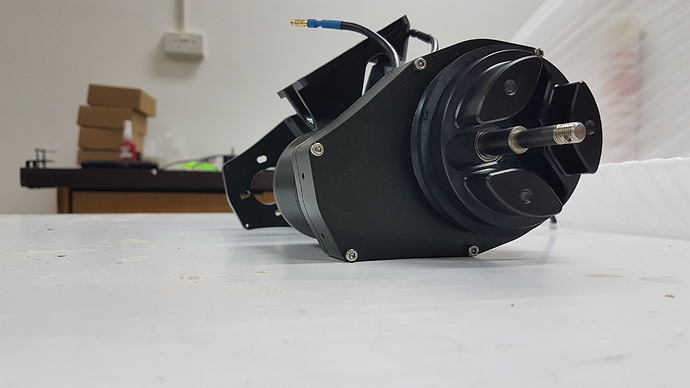 
Back to the deck. Trying something out. 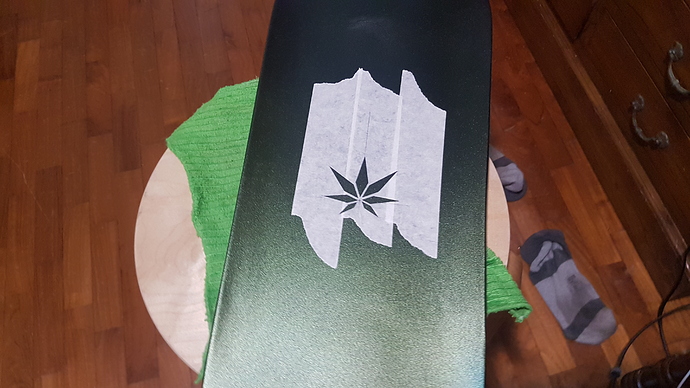 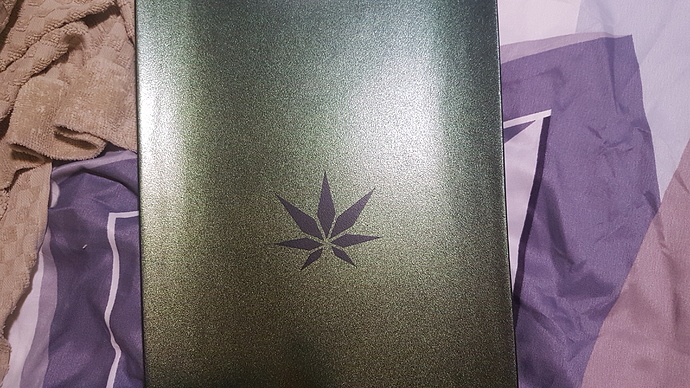 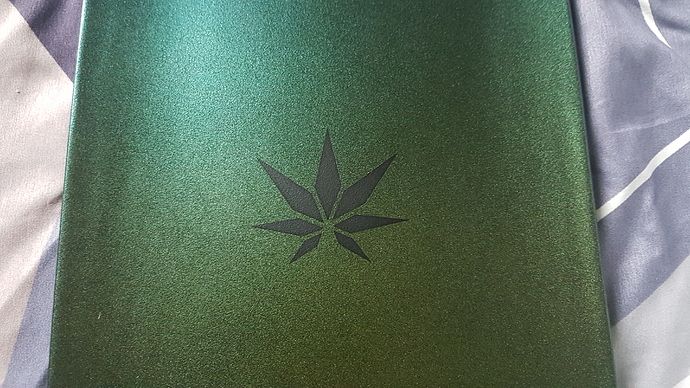 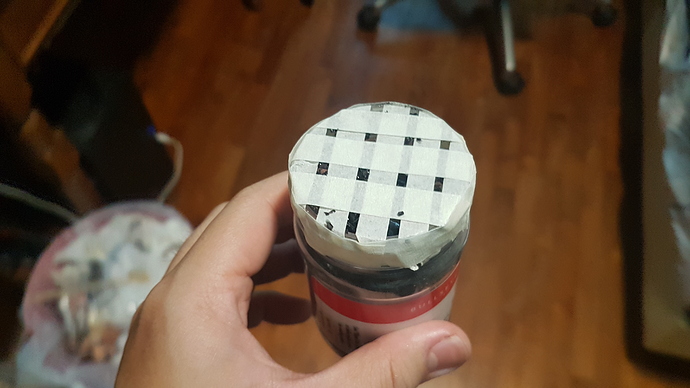 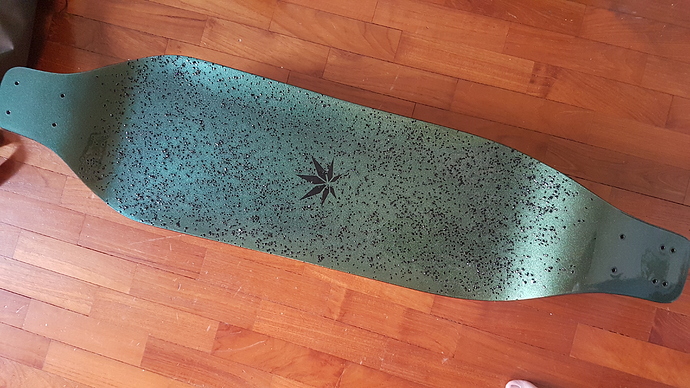 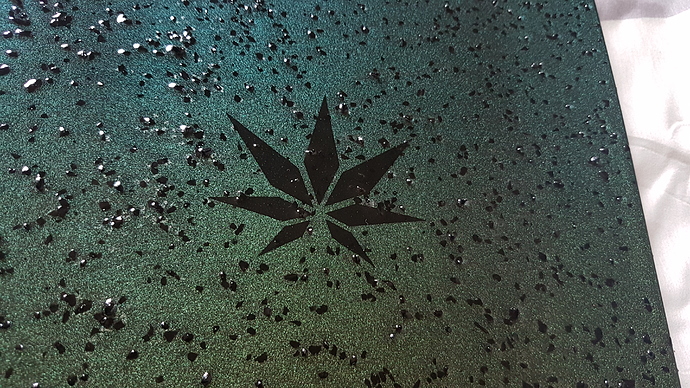 After it’s done, installed everything to the board, what’s missing now is the battery.

10s4p pack is done! There’s so much enclosure space haha. 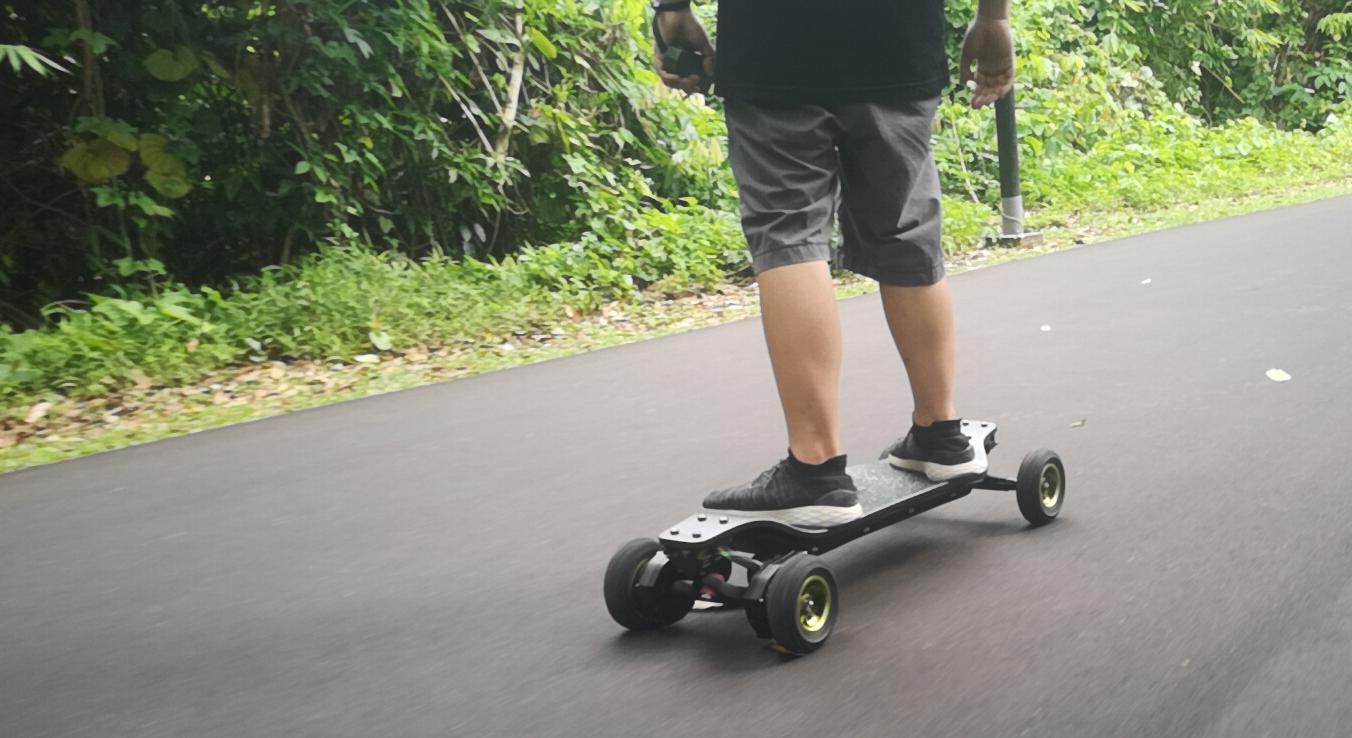 So yea, this build is perfect for urban carving and occasional offroad on grass etc. But i’ll probably use this often for when it has light rains. My area seems to that often. It’s not heavy rain, but the floors get wet. The Landyachtz Evo deck with these trucks and wheels, seem to be a good pair up, as the water that splashes does not hit the deck or enclosure, so the belly is relatively dry. Of course, mud guards would help even more. So there! Hope you guys liked the build as much as i do.

Graet Build @Linny, love the color shifting paint! may I ask you how you mounted your Unity to the heat-sink?

The heatsink that came was actually for dual focboxes so the mounting holes don’t match up. I stacked up a few layers of thermal heat tape to stick them to the heatsink plate.

Absolutely gorgeous. I’m not a fan of the falcon 36 deck, this build makes me wanna try it again

Yea normally a 36 looks too chubby and short for me but this looks perfect.

This deck is great for anyone under 5"5. If taller i’d recommend the Evo 39 or 40 in a heartbeat. I went for the 36 since the main goal for this board is to be as light as i can get it to for an AT. 10kg is pretty decent, also with the bergs, i can lift the front and drag it like a trolley.

I can’t spread out enough on the 36 at speed. I get all wobbly and loose at 30, so I like to spread my feet and straighten my front foot.

Like @mmaner said, I find that even at 5’3-5’4 ish I’m having trouble spreading out at speed… Dope af build though!

Odd, i’ve gone about 45km before on this and felt way stable. Have not gone full throttle on this yet though, since my area rarely has any straight clean roads with no one to test it out.

Well you probably have it setup to handle the speed. The right kind of setup can handle most speeds up to 35km once you go lower than 35in it starts to get a little sketch.

Love the build and the awesome 2 tone finish. great choice with the AT wheels too

Thats a beutiful board @Linny great looking u made it look easy.
Any paticular reason u went with the 36" and not the 39-40" the stance looks small u got more 30" to stand on?

What was the hardest part besides waithing on parts?

I went with a 36 because i wanted this board to be a bit more portable than full size ATs and longboards with 38~40" decks. Stance wise it’s alright for me, as i’m not a very tall person.

The hardest part would be stripping the deck of its original paint and repainting/fritting it.

DIY esk8 components are getting easier to work with and build, so i did not have much trouble with installing the components together.

Wait what happened to the frit?

It looks alright in the photos, but in real life, i guess i added too little frit and too much clear coat, it kinda looks like measles?

So i stripped it down and redid the whole thing, but spraying truck bedliner on the top this time, and then my color shift paint over it. I prefer this look now haha.