First Build - Wander, aka (not) Sponsored by Torqueboards

I grew up as a grungy street skater. Much later in life I found FPV quadcopters, and I’ve been building and flying those things for the last three or four years. One day I saw Nurk build an esk8; worlds collide. I am definitely building one of these things; I already know, like, everything (right?).

I did some research and quickly ended up here. Asked for some advice and here’s what I ended up with for a first build. There are some things I wish I had done differently as I have learned of the breadth of options available, but I’m pretty pleased with how this turned out nonetheless. Thanks to all who helped me out directly! (@Sn4Pz @Venom121212 @rusins @b264) and thanks to all of the rest of you from whom I have learned so much by osmosis in the last several weeks here. 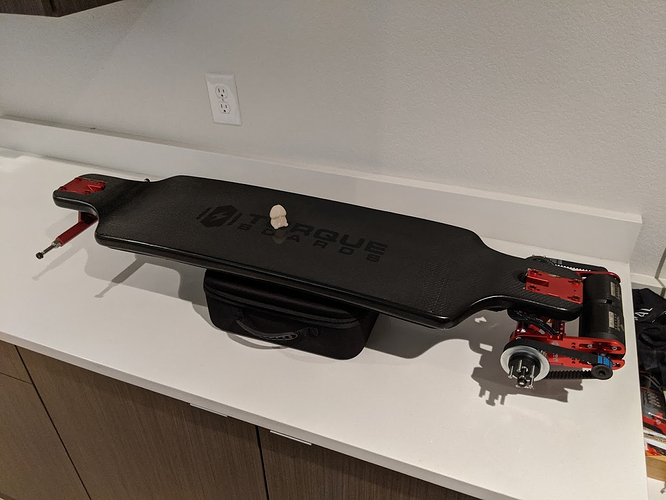 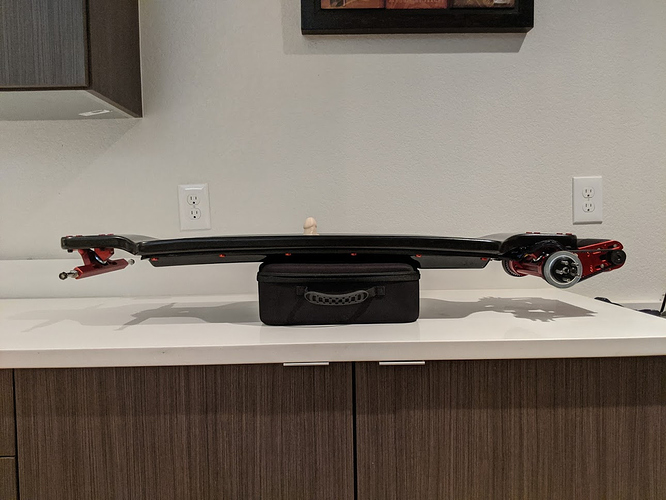 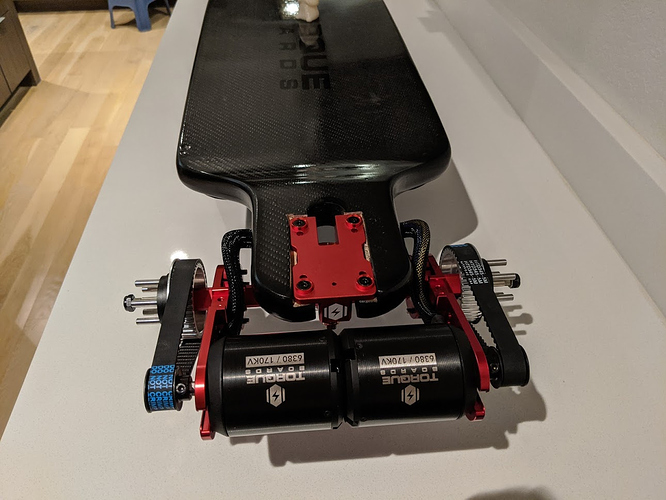 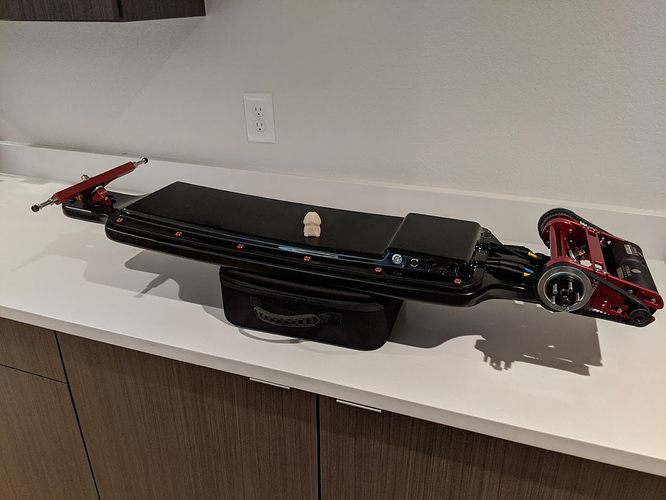 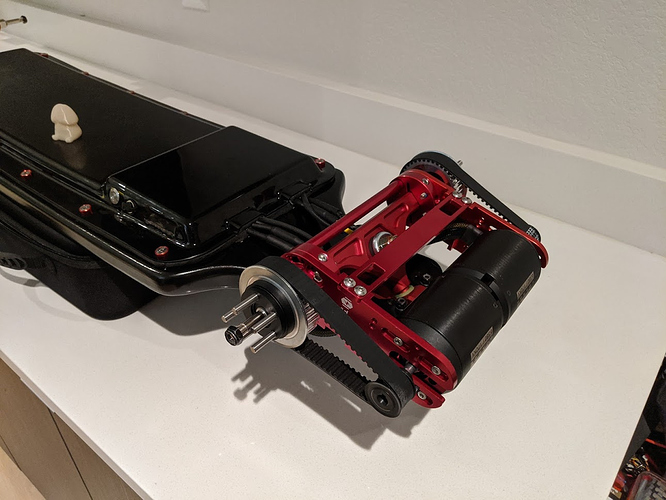 Other than that, great first build!

Those wheel pulleys sure look good

I was stunned when you shipped them next day. Wish everyone slinging esk8 gear responded as promptly!

Looks like a very sleek build with some serious planning. That’s a great part list and I’m sure you’ll be feasting with Odin soon.

Why did you choose to mount the motor mounts so close to the center? Why not flip the motor pulleys, and move the more to the side? Less stress on the motor axle then.

Edit: because of the crossbar, doh!

Can you please take a picture from the side of the board, so I could see how the enclosure pops out ?
Asking that because it seems like it’s poping out quite a lot only to be able to fit a 12s4p.
Thanks,

Yeah - that was a disappointment. Think I’m going to make a replacement crossbar to minimize the cantilever distance on the motor shaft. Pain in my fucking ass. C’est la vie

Scale is FUB. Giraffe’s name is Jefferson. I found him in a river. 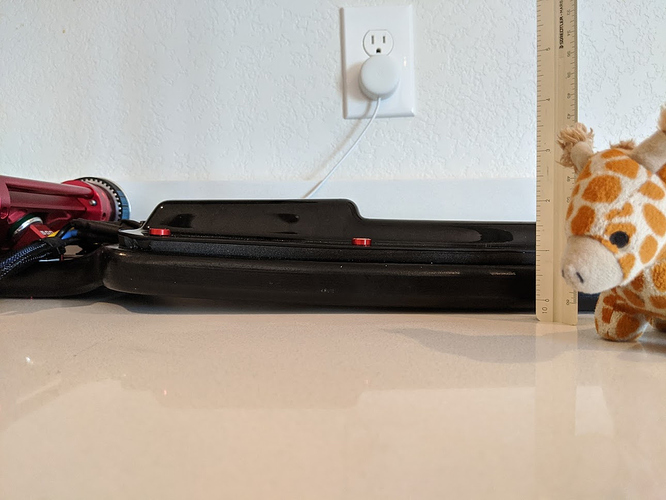 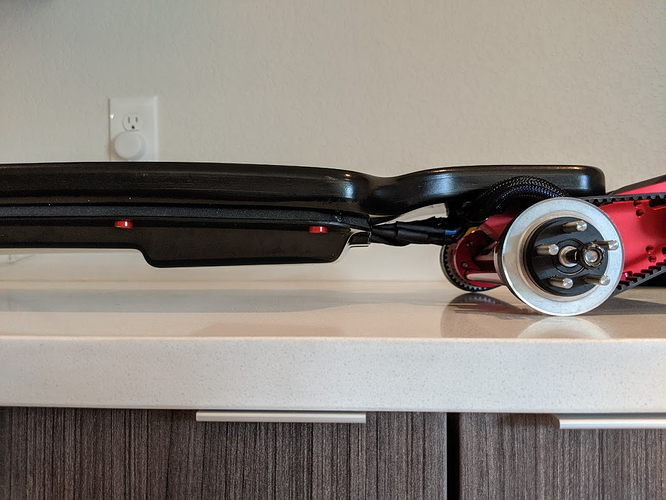 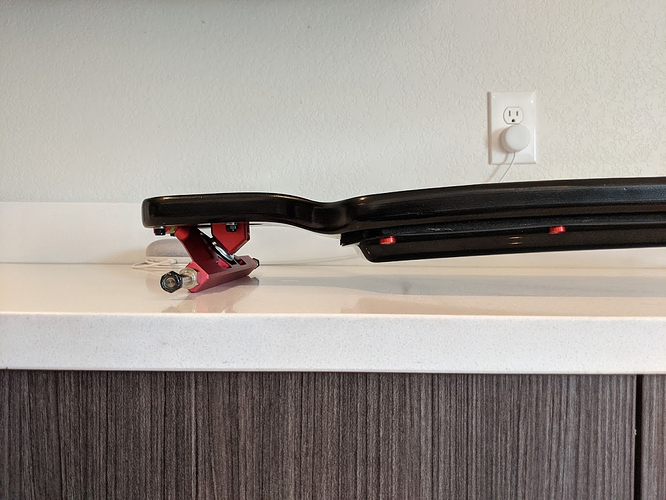 Damn, looks like my enclosure, but managed to put 12s8p of 50e under the bonnet 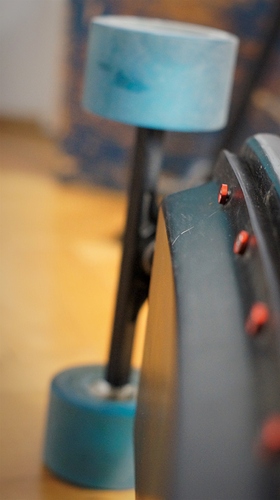 Yeah, wish I had gone with one of Ben’s enclosures. I do think I’ll end up with more ground clearance than your build has, but is that worth settling for less than half the range? It’ll get me to work in any case.

My setup is gonna be pretty similar. 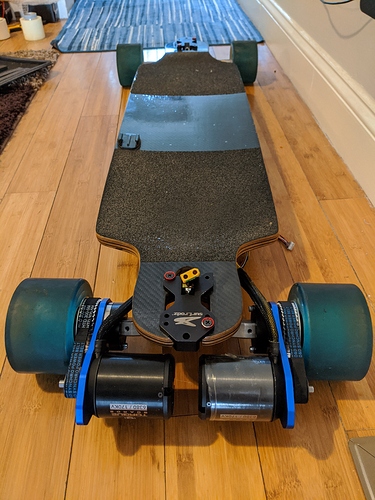 mine is going to look similar just a little less power lol what trucks did use? Looks like cnc TBs 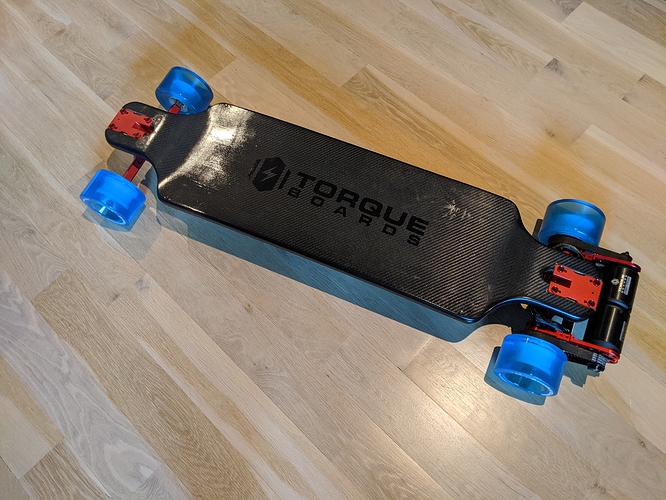 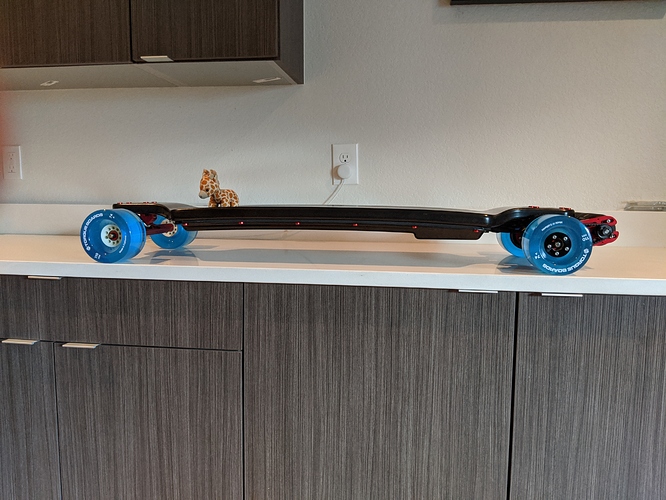 Wow, that is such a nice skate

That is beautiful… Pretty much a dream you got there! Reeeally good stuff!! How does it all ride?! need deets

If I were to dream a little harder, I would want this exact build, but then put a (matching top speed) TBDD on the front to get the look of a 2wd (motors out the back) being a stealth (as can be) 4wd.

Thanks! It’s my first build, so it rides like it rides I guess. I don’t have any basis for comparison. I was going for something with a modest top speed (~30 mph / 48 kph), but with a responsive, authoritative feel with plenty of torque. I feel like that’s exactly what I ended up with.

For my first ride, I charged the pack to 4.15 volts per cell and rode for about 11 km. Not sure what my speed was, but cars were not passing me even though I was hugging the curbs. Got home with 3.98 volts per cell left on the pack. Unity app said ~8-9 Wh/km.

Also, pro tip; avoid riding near lakes where geese hang out. Goose shit coating your legs and board is a bad look.