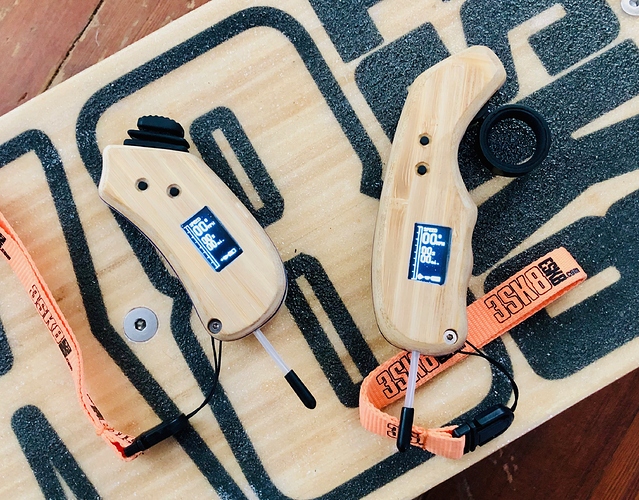 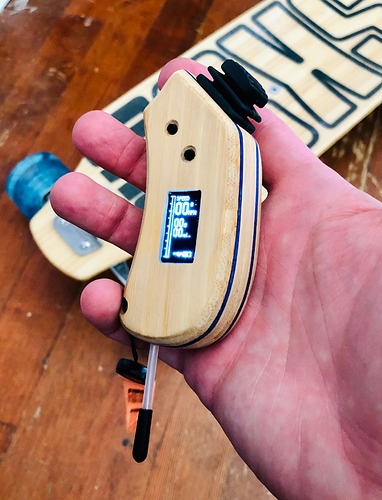 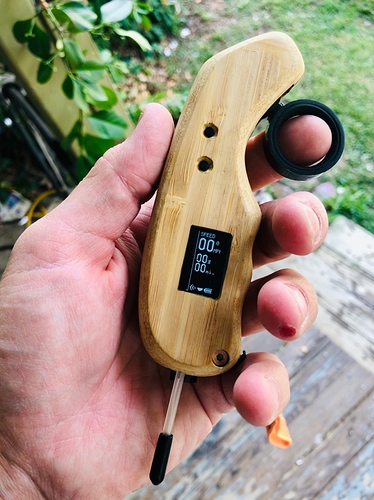 As most of you are fully aware, remote options for the DIYer essentially suck. Fortunately, out on the web, some very capable people have refined some projects that make creating your own badass remote possible… but not very accessible.

I designed these remotes for my board the 3SK8esk8 based on the firefly and Feather Smart remote project found on electric-skateboard.builders forum. Hats off to solidgeek and StefanMe for their incredible work on the code and electronics. I hesitate to say that my evolution of their design is accessible, but it might be to folks that have a different skill-set. Also, I added what I believe to be a few upgrades.

So, you don’t need a 3D printer for this and I found a way around PCB for advanced prototyping thanks to Adafruit. They conviently make a custom protoboard for the Feather M0. It saves a lot of wires and solder-points. I’ll post some pics of the custom proto-shield that I designed later.

The thumbwheel/trigger that I used is designed by a military contractor for use in aviation and with heavy machinery. It’s pretty serious and expensive. It has a very high impact and water resistance rating and a repeatable-use rating over 3 million. Also, it’s really plush, my thumb loves it. It only comes in 5V, so I had to work a little electrical-engineering magic to get it to work with the Feather M0 which only comes in 3.3v.

I made both a thumb-wheel and trigger model because that’s what people want. The handcrafted bamboo enclosure isn’t just pretty. It’s ergonomic and it has a higher impact resistance rating than concrete which might come in handy for obvious reasons. I poured 1/8 inch of epoxy over the OLED. It’ pretty rugged now. I had tried finishing the bamboo with acrylic but that made it feel like plastic. Instead, I sanded it down with 1500 grit sandpaper and rubbed in some pure tung-oil with citrus solvent. This finish allowed my sweaty meat-hooks to breath a bit more, and it has a nice citrus scent:) Fine gun grips and cutlery handles are finished this way. Why not an esk8 remote? Now you can pistol-whip fools that owe you money with it.

The OLED display has a few menus with all kinds of info like speed, ride distance, both remote and board battery-level, current, temp, connection and more.

The antenna did not need to be externalized, but I like its dorky look. And the oversized, orange wrist lanyard isn’t just shameless promotion. It will help to keep you from getting shot by the poh-lice. Also, it comes in handy when trying to fish the remote out of deep pockets and backpacks. But, no, I’ve never put it around my wrist.

Because the Feather M0 comes with a li-po jack I used a 250 mah lipo pack. It was just too convenient not to. I realize this is a controversial matter and want to mention that I think it might be best to ride with an external power-source for the remote all-together. When I’m being battery-negligent, I ride with my remote hooked up to a 5000 mah power-pack in my pocket by way of USB cable.

I added BLE for smartphone connectivity (which was stoopid-easy) and made a custom proto-shield for the receiver as well.

Right now I’m making these for the boards that I sell and for friends. I’m going to do a short run of these this summer for general DIY purposes. If you’d like to trade your first-born for a remote, check them out at 3SK8esk8.com .

Just a single axis on the thumbwheel? Some found the multi axis thumbwheel in the @waji remote strange

@Venom121212
This 3sk8 was obviously inspired by the Nordemeyer special.

Just single axis. That is my preference. I have ridden with the photon by @waji. His remote is very nice but the thumbstick is cheap and very basic. I wouldn’t use it on a vehicle. It’s meant for RC cars and video games.

Speed-vents are my favorite wheel. Especially the baby blue.

What ESC is that on your store? VESC 6?

It is VESC 6. I buy them in bulk from a Chinese supplier that hasn’t really expanded into the English-speaking market. They are one of the more compact models that I have come across with a heatsink, and currently, they are testing really well.

Nice. Can you open one up and show us pics? I’d love to see what’s going on in there.

They are really nice, the styling is beautiful, thoughtful explanation around the design process.

I am pulling the resistance on this! 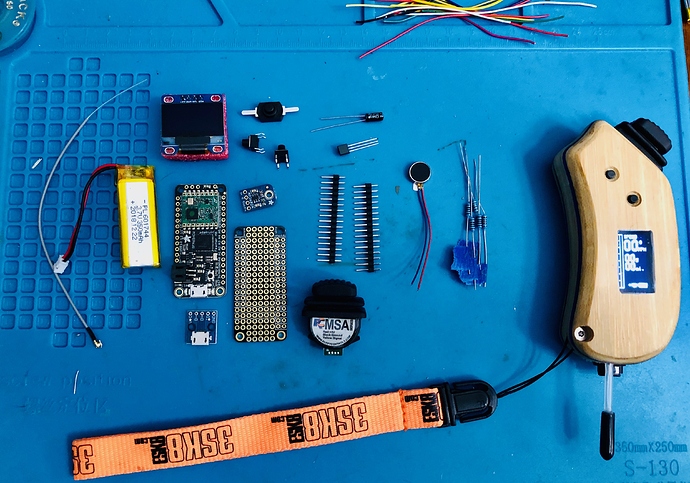 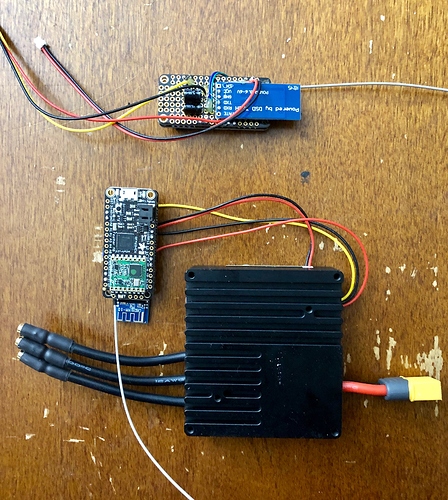 IMG_0713.JPG2981×3326 2.66 MB
Here is a pic of the parts for the transmitter and one of finished receivers with the ESC that I’m working with if anyone is interesd. The total parts list costs about $150. It’s worth mentioning that if your ESC has a poor 5V power supply (as many do) you need something called a low-current power-supply installed in the power/ground lines on the receiver. They cost about $7.50. My ESC has a solid 5V supply so I didn’t include it in my build.

I swear that I don’t work for Adafruit.

When it comes to enclosures… get creative. Ducktape would get the job done just fine or you can get fancy and press your own vaneer like I did.

or you can get fancy and press your own vaneer like I did.

Love the customization options on those thumbwheels.

I absolutely needed to have the blue in-lays:)

I know you did. That’s why I like your style. 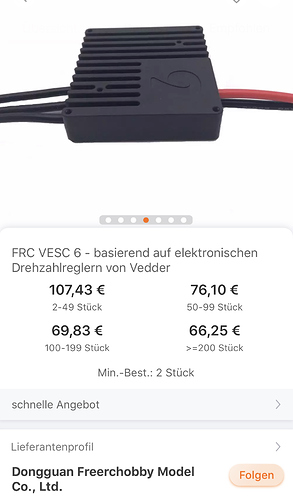 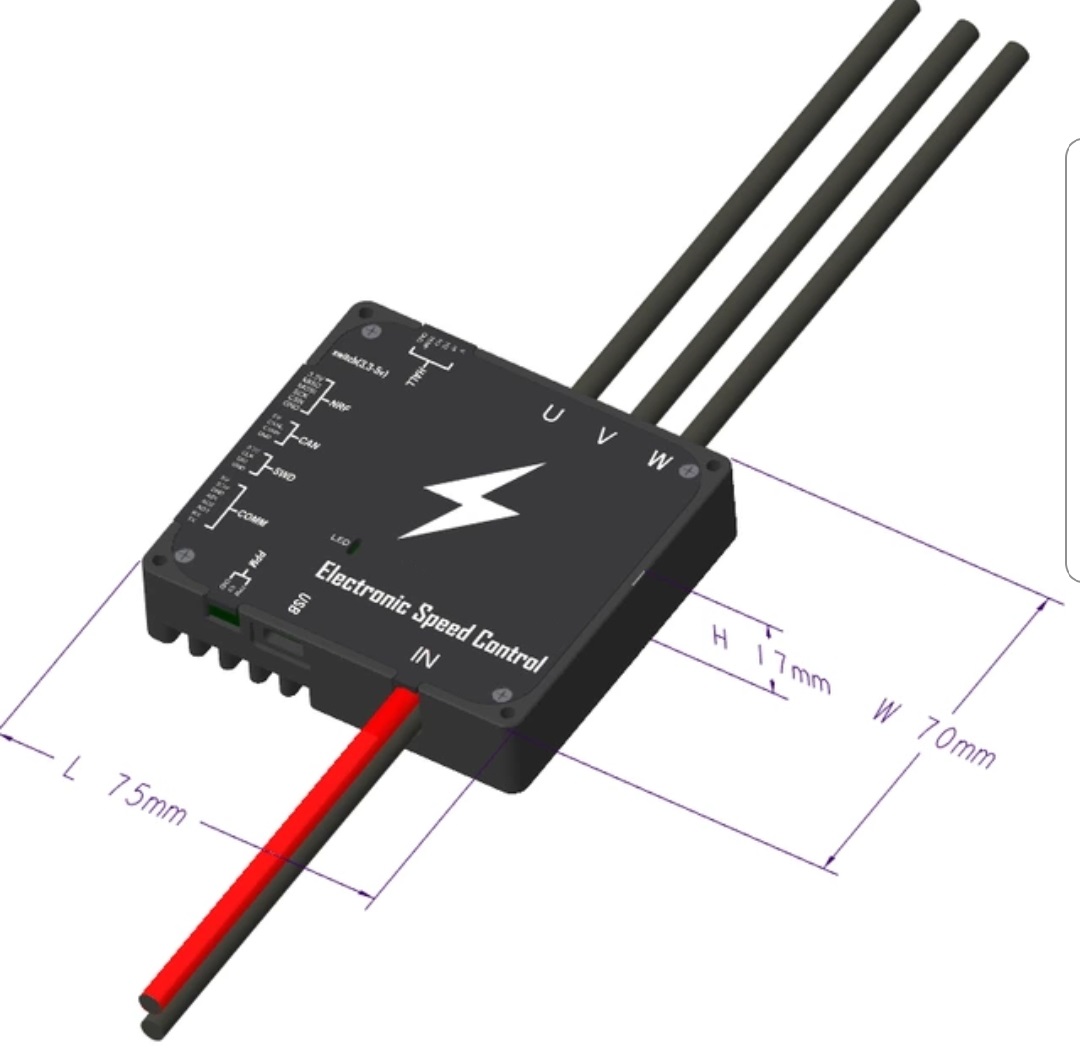