I finished my first DIY Esk8, but after a couple of weeks of having it and only being able to really take it out on the road once, I have decided that for now, I’ll take a break from esk8ing. I’m going into college this Fall, and don’t know what I would do with the board, or how much I would be able to use it, so I decided I’ll try to sell it. I would love to get more into this sorta stuff later since I loved putting the thing together, but with limited time/money I feel the need to postpone that.

Board only has five to ten miles on it, maybe less to be honest. It works well and didn’t have any problems during testing or during my one ride, everything seems to be working well. Board comes completely built, with remote already connected to the ESC. All parts were bought new, and while there are some scratches in the wood, nothing structurally wrong with the board. The motor has some scratches due to motor mount slipping earlier (nothing structural, just some cosmetic problems fixed with paint or acrylic tape), but some blue thread locker cleared that up quickly. The parts are mounted directly to the board with industrial strength velcro, with an enclosure made of PLA plus that is hard as hell and doesn’t need to be removed to charge the battery. The battery and ESC are connected through a loop key, allowing access to the battery also without having to remove the enclosure, making charging pretty easy. The enclosure is perfectly stable/strong but there are some glue stains on it that would be pretty easy to remove with some sandpaper (While putting it together I wasn’t the best with applying super glue to connect the two enclosure parts 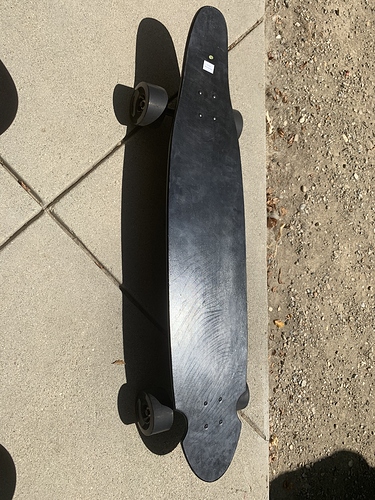 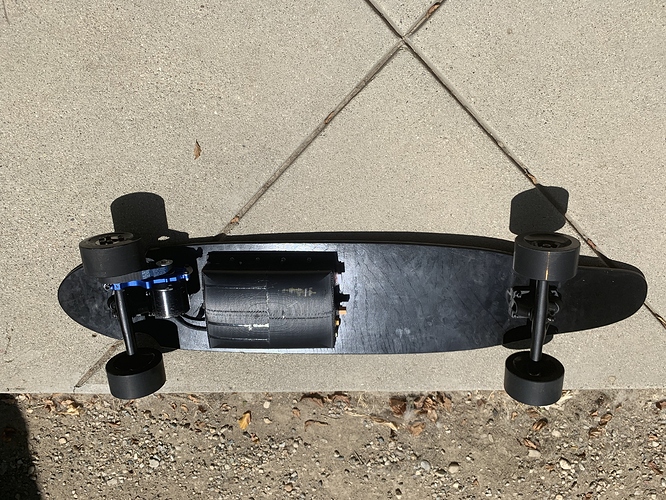 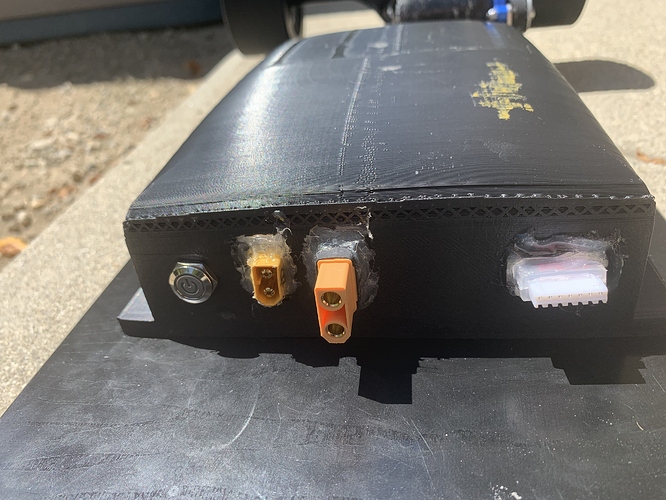 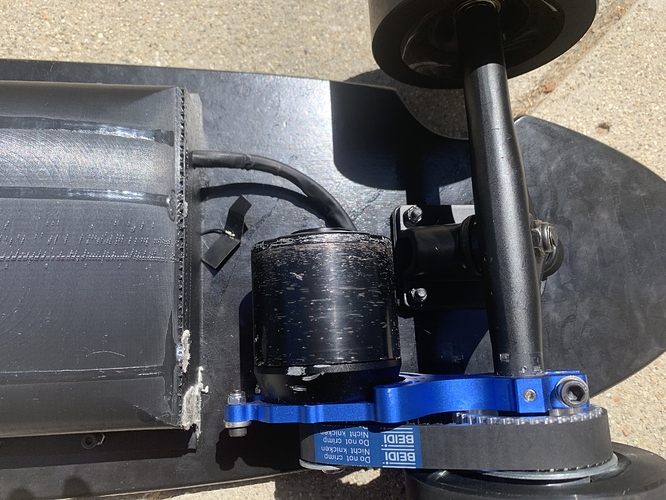 Parts:
Motor - 6374 200Kv
ESC - https://www.ebay.com/itm/single-motor-electric-longboard-skateboard-controller-ESC-Substitute/302546263597?hash=item4671299e2d:m:mCdoA1KWUudzshYh0fQGeBw&var=601544880982
Pretty basic, but it works like a charm with what I used it for
Battery - 8000mAh 6s 30C ZOPower LiPo
The motor mount is a dickyho motor that as said in intro works well. Some scratching on the trucks, but that is still just cosmetic.
Deck and trucks are basic skateboarding materials, nothing really special about them, but they work well.

Overall, I was very happy with this being one of the first things DIY things I built, if only I had more time to ride it.

I was hoping to sell for around $400, but the price is flexible. (The cost of the parts, plus a little bit due to assembly, enclosure build and such). Any offers or suggestions would be appreciated.

I’m located in California and would be shipping through USPS and using PayPal as a payment method. The buyer pays for shipping.

Thank you for taking the time to read this post!

No offense but even if you rode it 5 miles it’s now used and not new, it looks to be in decent shape but it is a single drive 6s build unfortunately you don’t get paid for your labor unless you have a reputation as a builder to justify the cost…for a simple build and as I add up the numbers in my head really for something so simple I probably say if you got a hundred fifty bucks for this then you should take it.

Needs a price per rules. Thanks!

You’ll lose more selling it than keeping it.

If you’re going to college its worth hanging on to to get around campus. Thats what got me into eskate in the first place.

Do you ever have problems keeping the charge? Im always worried about something going wrong, since my battery is always in my enclosure.

You need to be able to check when ever you want, or need, your Lipo battery. Your charger won’t tell you if it is puffed, or bms wires damaged. It is stressful for you to being always afraid and speculating. I would do something with that enclosure and keep it during college…

Yah I have 2 boards and I ride one every day at college, the other, every few days. Definitely worth it to keep imo

What do you keep your batteries in when not riding, and do you usually keep them at full charge, or slightly above nominal or what? Im just wondering how that would go, since I’m not sure how much i’d use it in college given the speed it goes and how hard it is to carry around. What board do you use?

How should I change up my enclosure to make the batteries easily accessible? I think I can use the same screw insert holes for any enclosure, as long as I can drill through it, but what amount mounting electronics?

Would it possibly be good to trade the one I have in for a smaller one just to make it easier to handle?

Well since I ride every day I don’t really worry about it being at full charge since it doesn’t stay at that for long.

As for making them easier to access, taking off a few nuts is usually alright in my opinion, that is up to you

Would it possibly be good to trade the one I have in for a smaller one just to make it easier to handle?

yes get a handle will make it easier to handle

I think size wise its perfect for campus. and idk about you but my campus has its fair share of crime so Id even suggest a sling. just getting a strip of fabric to shoulder and then hook it around the trucks will make life easier inside buildings. Ill post my solution once Im home if I remember xD

I currently have eight screws holding it in, but if I modify the case so the parts dont stick out, I could lower that down to four or six, which should still be able to hold it well for shorter rides. Any idea on how to make screw inserts stay in wood? Mine keep coming out of the wood when i unscrew the enclosure, making it harder to unscrew/screw in.

What speed do you usually ride at going around college? The only place I could imagine using it that much is going across campus to classes and using the roads to get there. Im going to UCSD, in case anyone knows the layout of that campus and could help out.

Depends on if I am on the road or not. I would check UCSD official policies regarding powered vehicles, but sure yeah I use roads, I follow the road speed limits for the most part and when I ride on the sidewalk I only ride as fast as I would push (10mph ish)

https://police.ucsd.edu/resources/bike-skate.html
Campus policy is ~8 mph and California law is ~15
That said, its mostly the up to the officer. If he thinks you were unsafe, then you were unsafe. But theyre ususally more impressed than anything. behave like a cyclist and youll be fine.

UCSD is king of eskate dude haha.
They aren’t going to say anything about eskate unless you’re putting anyone in danger.
Helmets go a long way in showing responsibility if you are worried about the campus patrol.
I go to school in LA but I’ve done my share of partying with UCSD dudes. (JOIN SKI CLUB, GO TO ALLCAL)

Haha yeah I ride at my school, CBU, all the time, I haven’t ridden on the UCSD campus but some of my friends go there

Alright. I guess ill try it out and see how it goes. At least I’m going to revelle, which is sorta far from some of the engineering classes so I’ll be able to use it down the roads a bit. At the very least, I’ll take it down the coast on weekends.

Any advice for handles or the previously stated enclosure?

Look for a kayak handle 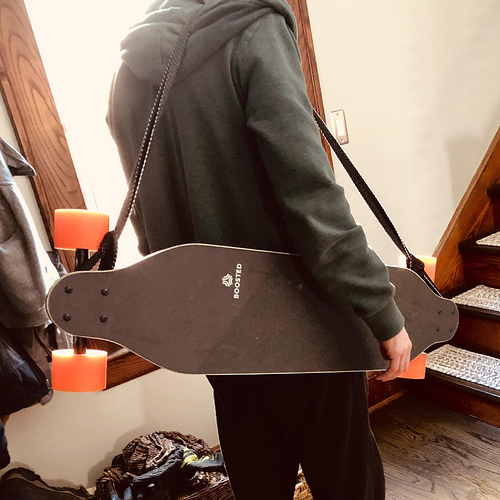 I’ve got a drawer handle covered in foam.
Seems to work. 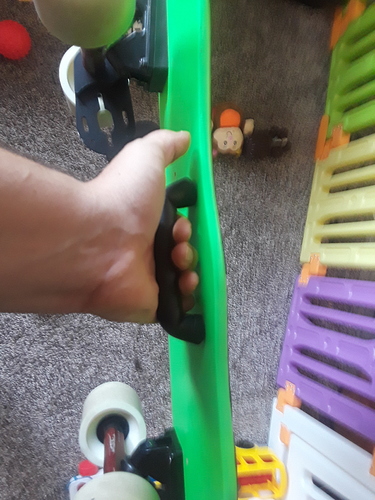