All of a sudden the website is blank. Whats going on Dave http://westcoaststandard.com/

Brand new or the one he listed in the apology thread?

Not a structural piece… further evidence that he/his claimed engineers have no idea what they’re talking about with regards to mechanical design :’(

Like, that’s basic fuckin statics which is like 10th grade physics. Wish things didn’t have to be this way

I saw that. Not safe. At all . my buddies trying to get a refund. So he can get a safe board that hasn’t been rushed and corners cut on it.

Just tell him to do a charge back so you don’t get caught up in bullshit. Cuz that’s what’s gonna happen.

I’d like to get a one of his GoPro mounts so I can kick it to flip my board over and watch it instantly break off.

The instant I saw those 3d printed parts on insta I questioned it,and they look garish.

Is that really considered MIA or is there more to the story here?

He’s responding. He’s not Mia. 3D printed x-things are not the end of the world in my opinion… I actually use them on two of my boards and they have been fine.

Please.update us if your buddy doesn’t get a dank board in the mail

I fixed the title my bad it did sound clickbaity and wasn’t clear.

Edit: I just started having PTSD from enertion carvon jed boards and jumped the gun my bad guys

Trust me, no hate, I hope he gets a board and it’s worth the money

hmmmm, did he order thru WCS?

As far as I know.

Oh ok. Are you trying to get in contact with Dave?

Just trying to figure out whats going on. I think it’s shady that psychotiller went up in smoke. Then this new comoany pops up with different partners. Then they leave. I like Dave. I love my six shooters. Just don’t want people to be out 3k plus on something that might not get delivered. And if it does it looks like its going to have 3d printed deck washers made from PLA. come on man. Amateur hour

Bruh they’re paying $3k for that shit? Just buy something from Damon at that price

Needs Dave to explain. I am in no place to explain this unfortunately… I will try to get him on here soon tho

Exactly. After everything I just feel their needs to be transparency. He hasn’t proven to be the most reliable as of late. It sucks but it’s the truth.

I opened that bag of argument with my questioning on the “brace” being 3D printed. All I was hoping for is that he would confirm that it’s a prototype and the actual production one would be CNC’ed and anodized. For production boards I don’t think anyone wants 3D printed parts no matter what filament material was used.

Could you imagine if @akhlut made this out of a 3D printer?! My nose bumper, stand is 3D printed. There’s a place for that. 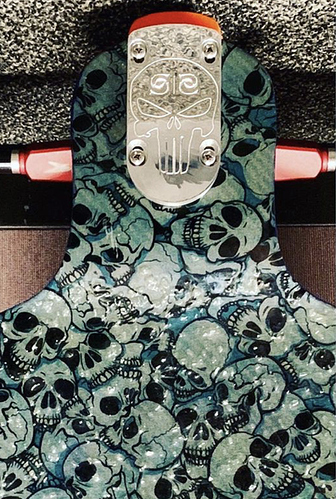 I have 3D printed x things on a couple of my diy boards. They have held up with no issue

But you are correct, if I was paying that money for a board, I would not want any parts to be 3D printed