The guy coding VESC-Tool is called Benjamin Vedder. He has written 98% of all code your skateboard runs on. He invented the VESC and wrote up the entire software A-Z and plublishes the code Open Source. www.vesc-project.com.

BECAUSE THE 4.12 is not really a perfect FOC controller and BLDC is safer.

You make assumptions and call them facts. It’s not perfect, but works just fine in FOC. Why are you taking options away from users?

Yes! I’m not so good with software and hardware stuff, but if someone could make a guide on how to get a VESC on recent firmware work with the BLDC tool I would be super appreciative. I hate flipping between tabs and hoping that everything is written, and doubling back at least twice because it straight up refused to write my values

You can run it in FOC, it is just safer to start in BLDC and them work yourself up. There are so many 4.12 clones out there that do not handle 12S FOC very well and DRVs just burn out very fast on them. It is always disappointing for the users if that happens on the first run. In consequence BLDC is the default for for HW4.12 and FOC is “experimental” for hardware of unknown spec.
Motor Config General lets you quickly switch in between FOC and BLDC. Parameters are already detected, so it’s just a button to go from BLDC to FOC.

You are all very good at complaining instead of actually be thankful that a guy coded roughly 60K pages of source code which are publicly available under GPL V3. If you don’t like certain things, simply compile it the way you like it.

VESC on recent firmware working with the BLDC tool

Do you actually want customers? The issue is that you are being asked to implement features, your refusing to do so with the excuse “I’m right, I’m always right”. Your a frikkin toddler.

Frank that is the wrong attitude.

We are telling you things we don’t like, you can either appreciate all that free user feedback or you can continue on some weird crusade. I wish you were more open to feedback.

Its simply not that easy and straight forward as you may think. The amount of time in that software is beyond anything anyone could have ever expected to be put into it.
Thousands of hours of source code writing, testing, re-coding, new FW for new devices, backward compatibility, Android App, remotes, bluetooth, RT data analysis, tons of features etc.
It’s a huge task to take the mile stone steps we have seen in the past.

The issue for us with this is IT DOESNT TELL YOU ITS GOING TO PUT YOU ON BLDC.

nobody has issue that it’s doing that to protect your hw but come on, how hard is it to put a pop up saying

‘’warning we’ve detected you have v4 hw, it’s not recommended to run FOC, are you SURE you want FOC?"

Instead it stealthy puts you into BLDC, your average user isnt going to read your change logs

Its simply not that easy and straight forward as you may think.

I am aware it’s not easy. Your assumptions that I don’t know what I’m asking are unfounded.

Here are the facts…

If you’re just not interested in feature requests from users, then say that. Stop wasting everyone’s time
being insulting and telling people they don’t know what they want.

Edit: Proof that the feature has long existed… 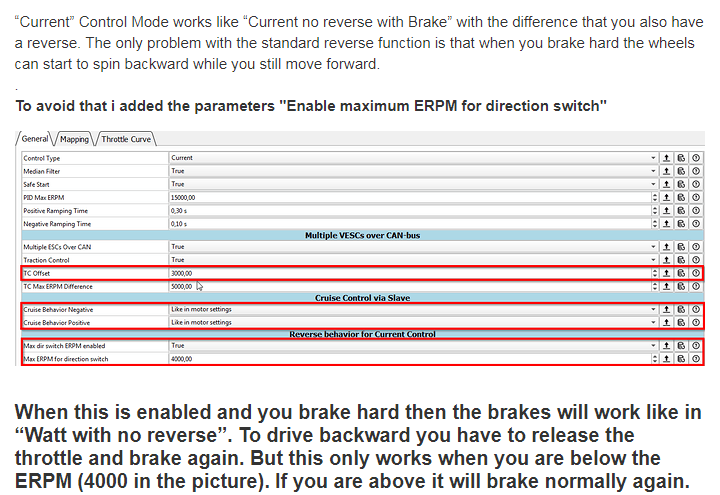 Probably will do that in future. Now there is a huge task on the table, making the App play store compatible again, using the new QT version. Apps need to be 32 and 64Bit compatible from October on.
When that is nailed, there is time for a polish.

The app also has bugs that need fixing.

Voltage at 100% constantly on dual vesc unless can forwarding is selected is one that springs to mind straight away.

That is maybe a config issue or hardware issue. On my board and phones it is very accurate.
Check your battery settings on the VESC that has the dongle attached.

No it’s a bug, I just recorded this to show you

The tool actually takes data from both ESCs to generate RT-Data.
Your dongle is on Master side and you run the Motor Wizard to nail both ESCs in one hit.
After that procedure you should get accurate readings if you dropped in accurate values.
Battery LiIon, X cells in series, X Ah.

you should get accurate readings if you dropped in accurate values.
Battery LiIon, X cells in series, X Ah.

What he is telling you is that he input accurate values but is NOT getting accurate results. It’s the same thing I and other users told you yesterday.

Did you watch the video?

The vescs are set up correctly Frank, I’ve done it more times than I care and make instructional content for others to follow. The dongle is actually on what I would call the slave side in times past, I.e the one that doesnt have the PPM input. I have seen the same thing across two different boards now, it’s a bug!!!

I need to check that myself on different HW. Did you try to put the dongle on the same side as PPM (Master side)?

Not yet, but I think we agree it shouldnt matter. I will do that though

Another bug is the “done” key not working on my Samsung when trying to change values, that’s a weird one.

That is a thing that needs checking after changes for the new QT Version.

With regards to RT-data: I think plugging the dongle into slave might be the issue. I can ask if there is a fix for that. As far as I know the master takes the data from the slave, an algorithm is making a set of data which represents the accurate average across both VESCs and that data is displayed in your APP.