I have a 100a fuse in my system. My focbox is configured for 48a max each. I was thinking about a 60a fuse direct at the vesc wires (before the 2 vescs run together) to be more safe. Does the vesc 100% just use max about 50a when I configure it or are there short times it pulls much more and the fuse goes off? I know even with 50a you aint pullin that much often. I just want to be sure for the fuse.

Does that work out?

These fuses are slow burning ie it will take quite a few seconds at 100A before they actually blow.
The vesc does not allow overcurrents for more than a few ms maybe even less.
You will be fine.

To give you an idea 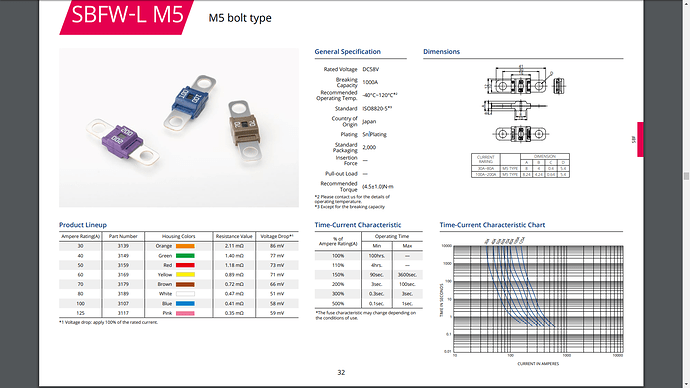 nice schematic perfect. already have the 100a fuses from them

So fuse makes only sense on the battery side than, right?

Why only at the battery side? Doesent the vesc say how much you pull? Maybe I got you wrong

That was my question. My thoughts are a fuse to prevent the battery from burning down if out of any reason there is a short on the wires from esc to battery. With short i mean the plus and minus are kind a hanging together, because of a meldet xt90 for example. Maybe not the best example

Oh jeah thats a good idea! I think you can do both. If there will be a supershort like that I think you need a fuse thats more than you battery can provide max so there is no lightbow in the fuse. But 50 ish V for 12s should work😀

Not a fan of fuses on the main system. It won’t stop your battery from burning but it will protect the vesc from the short. Of course if the board is on fire then the vesc is toast anyway. Fuses sometimes go without warning and this will result in you hurtling down a hill into traffic. I use that analogy because there is no way a fuse will blow without putting you in mortal danger, its the way the world works. You need cell level fusing to stop thermal runway of your battery and a fuse on the charge port to stop you burning down your house but a fuse on the main wiring is just asking for trouble. I would rather ride my burning board to a standstill than lose all power at the most inopportune moment.

So you don’t think a fuse on the main leads will not protect the pack if the wires short out? Why? And why you use a discharge bms if you don’t like this analogy?

wouldnt say that, fuse can protect your stuff for sure. When the battery starts to do that stuff okay but when you do everything proper take care of your stuff and pay attemtion that wont happen that fast I think

Its a big bitch Andy. If you have a short in the cells then how is a fuse past the battery going to stop it burning? All it will do is protect your vesc from the short. Of course if you have a short on the vesc then yes the fuse will protect the pack. Its a choice really. Thats all

fuse can protect your stuff for sure

sure but the fuse is the over max the vesc can do anyways. So it makes no difference except your vesc isnt burned cause of over current and maybe 1sec more break time. Very unlilly both vescs die in dual. you know what I mean?

Its not blowing the fuse that worries me through riding. You factor the size of the fuse correctly then there will be no issues but how many times have you had to replace fuses in your car that just blow? No apparent reason but gone anyway. Over time a fuse handling current will eventually fail and unless you are vigilant in your maintenance and replace them frequently then sooner or later it will fail on you.

vescs died before because exactly of that issue. So I feel saver. But I know totaly what you mean like I said

The NESE modules use these bars for making serial connections: 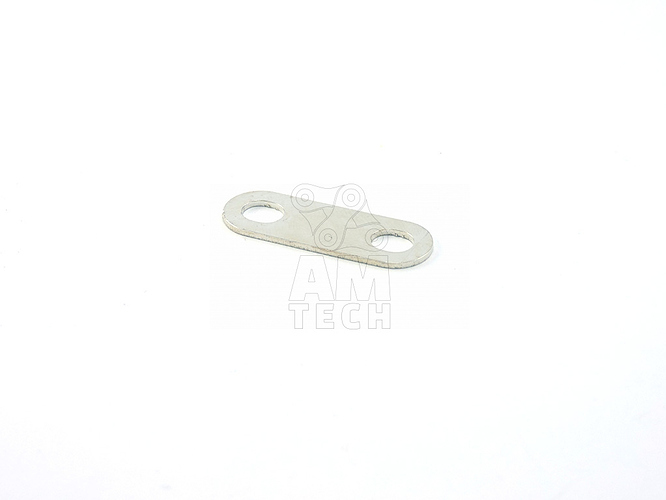 The shape is very similar to a MIDI fuse: 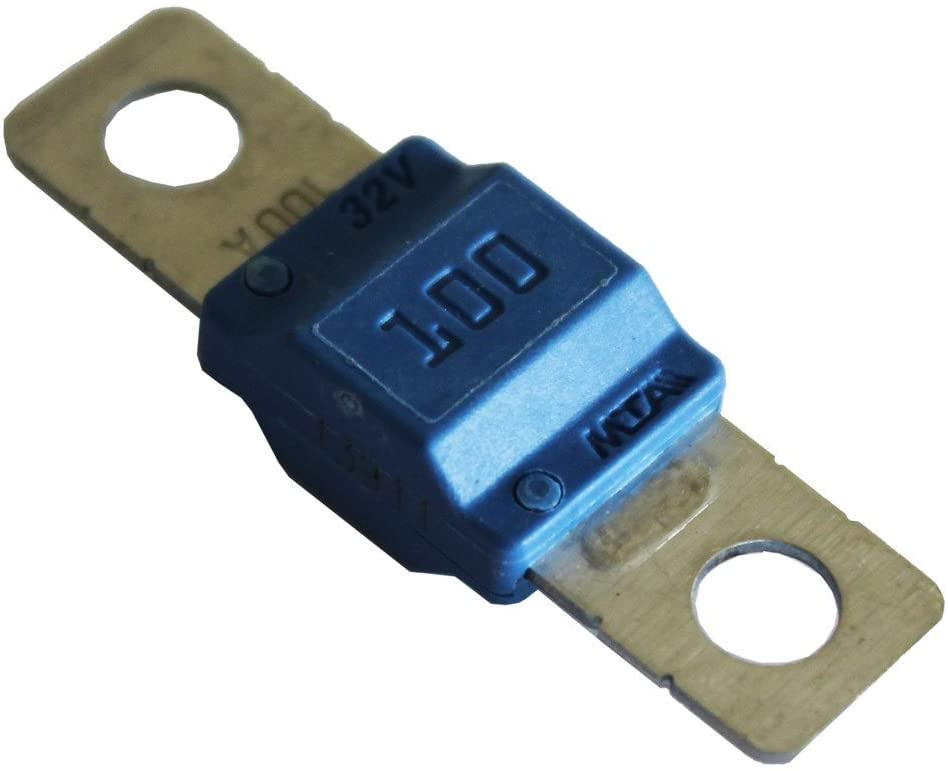 The holes are M5 in both cases. The hole distance on the fuse is 30mm and 23mm on the bus bar. Not a perfect match but close enough. The fuses could still be used in place of the bus bars if some space between the NESE modules is allowed.

The idea is to use fuses for all serial connections in order to minimize the risk of a short circuit. It’s of course not bullet proof. A short across a single parallel group would still be possible. The effort here is not to prevent the possibility of a short completely but rather highly reduce the risk.

Is this a good idea?

I can definitely see the risks of using fuses. Loosing brakes while going downhill because of a blown fuse is not fun. Still, I would rather take a spill than burn my house down. Also, braking currents are lower than discharge current so I believe a fuse is much more likely to blow when accelerating than when braking.

If thermal runaway is the main concern, would it be better to ditch the NESE and do cell level fusing instead? That should be close to bulletproof.

What fuse rating should one use?

Consider a 60A battery current limit on a VESC, 12S4P battery pack using Samsung 30Q cells, and 60A MIDI fuses (say these that are rated 58V).

Four parallel 30Q can deliver 60A continuous. I haven’t been able to find how much current they can discharge if short circuited. Will that be enough to blow the 60A fuse? According to the datasheet, the fuse will require at least 150A to blow within 1 second. With 120A or less, it will take at least 10 seconds for the fuse to blow, which is not helpful at all.

Does it only make sense to use a fuse if the batteries are able to discharge current that’s way above the configured battery current limit?

I guess I can’t give you a science base answer to it, just my thought.
For fusing each serial connection, if one p-group is shorted it will blow up blow up and take the other groups with it doesn’t matter if there are fuses or not. It’s the heat which will trigger the other cells to blow.

For the current to trigger the fuse I think yes a short will definitely blow the fuse first before a 4p pack will blow up.

For cell level fusing @akhlut did write up some nice calculations. 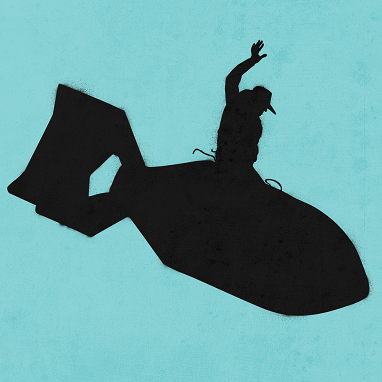 Battery Backer PCB's. Contribute to akhlut/BATT-PCB development by creating an account on GitHub.

Personally I would always fuse the main leads with a slow blow fuse and maybe as well the charge port, because why not.
If it’s possible build a pack that is a brick with plastic spacer. There everything is nice and clean and tight up. If you can’t because the battery need to fit in an enclosure, try to isolate each p-group from the others as good as you can. I think most of the shorts happen because wires get lose or cut/rub threw isolation. If each pack is nice tapped and isolated than a lose wire will cause a power cut out but no way the bare wire can touch any other part of the other batteries.
I also like neutral silicon to fix the p groups and wires. A pain in case you one day need to replace a p-group, but better like this than having the cells jumping around in the enclosure.

Also I know it’s an unpopular opinion on here but ideally this is the stuff that discharge BMS’s prevent through short circuit protection and temperature protection.

I’m curious if it would be enough to prevent the thermal runaway if the pack cut out at 60C or something but that’s something that’s very hard to test.

Also 30Q’s are technically only rated for 15A they recommend temperature management for higher Amp draws. I personally would not feel comfortable discharging a 30q pack at 20A from 4.2 to 2.5. I think a single cell already reaches around 75C under those conditions, but no one realistically ever draws 20A continuous.