Using reclaimed cells - worth it?

I’m wondering is it a good idea to use so-called “reclaimed” cells to build my 12s5p. I would like to order from NKON, trustworthy source of cells from EU, and they have offers like this, describing it as follows:

"These batteries come from battery packs in which welding errors have been found. The batteries have never been charged or discharged.

The cells we offer have:

Should I expect any problems with them, e.g. welding problems?
The price difference is huge, it’s about 50% of the original price.

What do you think?

is it a good idea to use so-called “reclaimed” cells

I am thinking to buy some more reclaimed to extend existing pack. But thats me.

I’ve made some packs from reclaimed cells and they’ve preformed well… as long as all the cells have the same calendar/lifecycle age.

If you want to be extra safe, you could run all the cells through something like the Opus BT-C3100 to make sure they all have roughly the same capacity. It would only take one dead cell to ruin your whole pack, and sometimes those reclaimed packs have a dead cell or two.

A BMS that allows you to see individual cell voltage would also be a really good idea to monitor pack health.

I have reclaimed cells that were in use, and they’ve got over 1k miles on them

It’s been over two years now, and they are starting to show some amount of imbalance. If you choose to use reclaimed, build your battery as safe as possible and at least try to make sure they’re all about the same age

I’ve made some packs from reclaimed cells and they’ve preformed well… as long as all the cells have the same calendar/lifecycle age.

This is so important. If not the most important thing.

Whoa, many thanks for your replies, valuable insight!

Would you recommend any specific?

LTT BMS is pretty well known for that and widely used.

If you are using a VESC a CAN enabled charge only BMS is the way to go. FlexiBMS or Ennoid

LLT is cheap and works, it just doesn’t talk to the vesc, but you can view it on a smartphone/davega

Sounds way more reasonable. Could you share a link or something? I guess my brain is crippled these days, as I clearly cannot find this on my own

Relatively cheap Chinese Smart BMS that supports UART communication and comes with a bluetooth module. An Android app that can display cell voltages as well as other useful information is available. It’s a very basic app. The UI is by far not as polished as Metr, but it does provide all the info anyone may care about. There’s also a number of configuration options. 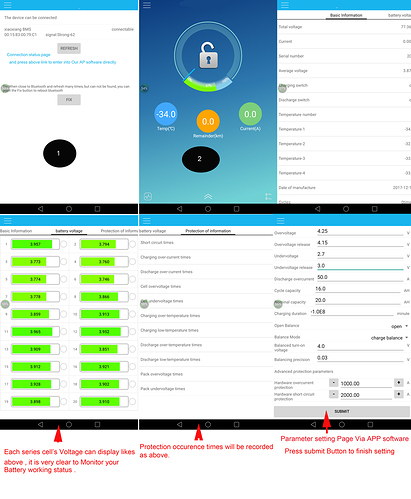 A third party iOS app is available for $1.

Flexi bms, neptune bms, these are the fancy ones, llt is on budget but it works well

But you will only be able to see the voltage of p groups, not individual cells

The cells in a p-group all have the same voltage.

Hi All. Iam just bought reclaimed cells. Price was great, but now I see why. Have you some ideas how to fix damaged isolation and how to remove burrs from welded strips? 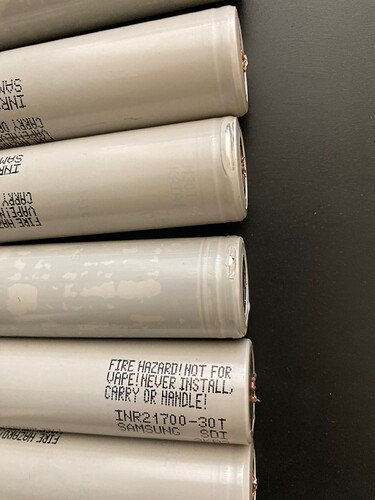 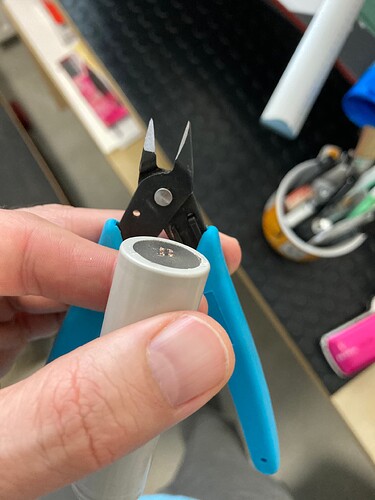 Yep-replace the wrap entirely, and personally I prefer using a Dremel with a sanding drum to take the nickel bits off

**Also, be reaaaaly gentle with the sanding drum. I’d err on the side of less sanding is more material sanded off, just to make sure you don’t accidentally shave off too much.

Replace the wrap? You mean remove it out? And use kapton tape instead? Or just fix gaps with kapton tape? Thank You a lot for Your help🙏

No, I mean cut off the original wraps entirely and replace it with new shrink wrap.

Kapton tape isn’t use for physical insulation like the wrap currently on your cells. It’s too thin for abrasion resistance. Kapton is better for preventing things like voltage arcs and other things I can’t remember right now (you should Google it though). It also has a high tolerance for heat.

Thank You , that sound good.So replace it is from Your point of view better then cover old wrap with new one?

Yep, personally I’d just replace it. I suppose you could just wrap new shrink over the old but then there would just be unnecessary extra thickness.