Has anyone had this issue? One of my hubs started clicking today during a very normal, uneventful ride. It started as a very quiet chirp, and I thought it was just the sleeves rubbing, but it got worse and worse throughout the ride. Now it sounds like this:

For context I’m running 12S, 50A motor accel/deccel, 30A battery. I haven’t gotten them hotter than like 50-60 degrees Celsius (going by hand-feel). I’ve been babying them really. I’ve ridden them for less than 100 km so I’m kind of disappointed…

Kind of a long shot since I know very few people have these and even fewer if any have had this issue. I’m mainly here just to document it. I emailed Unlimited about it and will report back with their feedback.

I’d like to hear what unlimited says, but my money is on the bearings. They probably need replacement. About how many miles do you have on them?

Have you tried tightening it down? Sounds a bit like a speed washer or that cone washer being loose and bouncing around.

I run mine at 25A and it gets really hot. Granted I go really fast on mine, but still.

I checked the torque on the wheel nut and it was slightly loose. I just cleaning them, torqued them down really good, and redid motor detection in VESC tool. They seem fine electrically and sound slightly better, but the noise is still there.

I run them at 50A per motor… they detected at just over 30A but I increased it until I was happy with the braking power. I don’t push them hard enough that they get too hot (i.e, never hot enough that they burn my hand) so I didn’t think I had to worry about that. I’ll keep it set to the detection currents for now though.

I don’t think it’s the bearings. In the back of my mind I know it’s probably a magnet hitting the stator or a loose winding but I seriously hope not.

One thing that was interesting is that the spacers holding the rotor in place rotate while the motors spin. I don’t think that’s what’s causing the noise though.

Actually, watching the two videos, it sounds much better now! Hopefully it being loose on the axle was the issue then. I’ll have to remember to check it every once in awhile. Thanks!

I’m not sure what that clicking noise at the end was, but the beginning sounds 100% fine, just like mine.

Oh yeah I think that’s just the VESC hitting 100% duty and backing off. It doesn’t happen in normal use. But that’s good to hear!

I think the issue is resolved but I’ll update with Unlimited’s feedback, if they respond.

Update for anyone else who has/will have this problem:

My hubs still click after a few hundred kilometers but it is barely noticeable anymore so I haven’t been too concerned about it.

It took quite awhile to get a response from Loaded after emailing, but it turns out it was a waste of time because they weren’t willing to help for a DIY project. I can understand why, but I had hoped that they could give me a bit of guidance

. Maybe they haven’t seen this problem before. 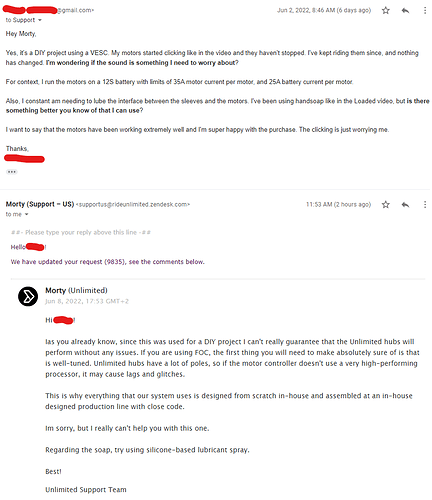 Anyway, I won’t be pursuing this further because the clicking hasn’t gotten any worse, doesn’t affect my ride, and really doesn’t bother me anymore.

Also had this with a couple of different hubs before, re running motor detection AND yes to defaults always fixed it for me.

If I just re ran motor detection and didn’t reset the settings to defaults, the issue would still be there.

I’ve got the same clicking with one of my loaded hubs. It first occurred after I had removed the hub from the truck and then put the the hub back on. I tried to work out what had happened, but couldn’t come up with anything. Ive been riding on it for 18 months with the click. It hasn’t become better or worse in that time and hasn’t caused any other problems. Would love to sort it out though as it is a bit annoying to listen to at times.

What ESC are you running? Im using the dinky Flipsky 6.6 minis. I doubt thats the issue but im trying to eliminate it.

Im not running my hubs on any board atm but I remember that the issue only happened for my right hub and the sound was loudest when I was making a right turn, but still made sounds when I was taking a left turn. On a perfectly smooth road going straight the noise went away.

The noise is barely noticeable now though after cleaning the axles and the part of the hubs that touch them, and then torquing them on the truck super hard.

Running the complete loaded setup. I’m fairly convinced it’s something mechanical. I only had the hub off for 5 minutes and it seemed very obvious that it was because of that. I’ve tried varying the nut tightness but it has no effect, so who knows…