(This is going to be a long one, with lots of images) 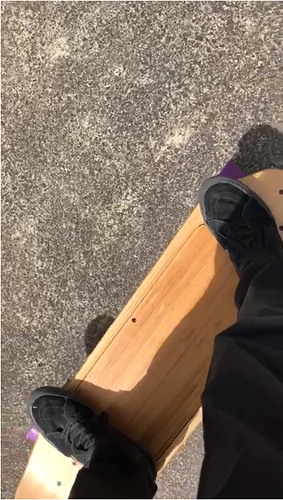 Well it all started in early september 2019 when someone in Electric Riders Melbourne posted a link to the rideNEO website, I was very interested in the integrated deck @jeffwuneo was offering, especially after missing out on a Haya a month or so earlier, On Mon, Sep 23, 2019 I pulled the trigger and decided to contact Jeff and buy a deck, shipping and exchange rate brought it to just under $500 AUD, basically my entire pay at that time.

Jeff told me the deck would take a couple of weeks to be produced and delivered, so in the meantime I started to look at components for the rest of the build.

Being my first DIY I really didn’t have anything to compare or contrast specs or quality of anything I would be using, so I relied on the knowledge of the forums (everyone’s least favorite, .builders, and everyone’s most favorite, .news) and the members of the Melbourne eskate groups.

Flipsky had a good (to me) deal consisting of Dual FSESC4.20, 2 190kv 6354 motors, an antispark, a bluetooth module, and a VX1 for $500 AUD, so I bought it, thinking that even if some of the components are of moderate quality I can always buy something better in the future.

I also got 2 torqueboards motor mounts with 15/36 ratio.

In mid October Jeff told me that my deck had finished being CNC’d and was nearly ready for shipping, but because of the cracking/delamination issues experienced by a couple of people he would be producing a new deck of the modified and improved design, which would take a few more weeks to produce and get to me, around this time the group buy was ran on the forum, so I was able to see progress by that. I am very happy with the way Jeff handled this whole situation, I absolutely did not expect for him to just dump the potentially faulty deck and produce me a brand new one, for no extra charge, this solidified my view of him as a great member of the community, something that I’m sure everyone here can agree with me on. 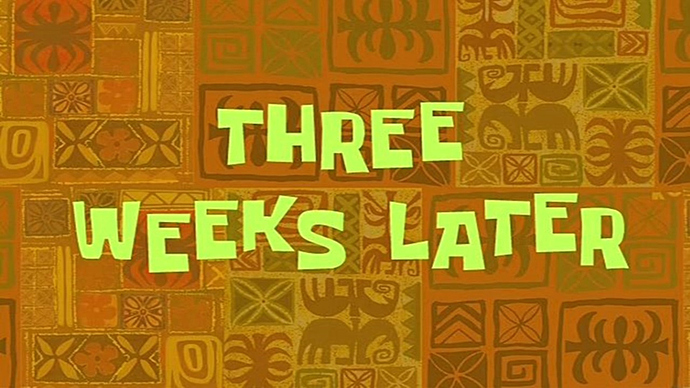 I get an email from Jeff for address confirmation for shipping and was elated, about a week later I got a message from AusPost saying I had a package waiting for me at the local post office, not realizing what it was, I rode there, this was a mistake… 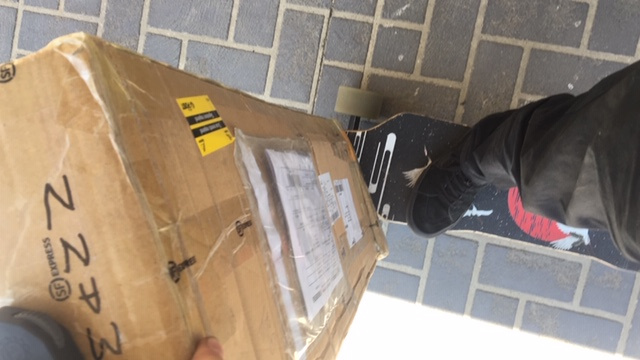 Getting it home was a fun time /s but I made it, and just about ripped into the box to see how it was, the deck was everything I ever wanted and was absolutely prime craftsmanship by Jeff and his team. 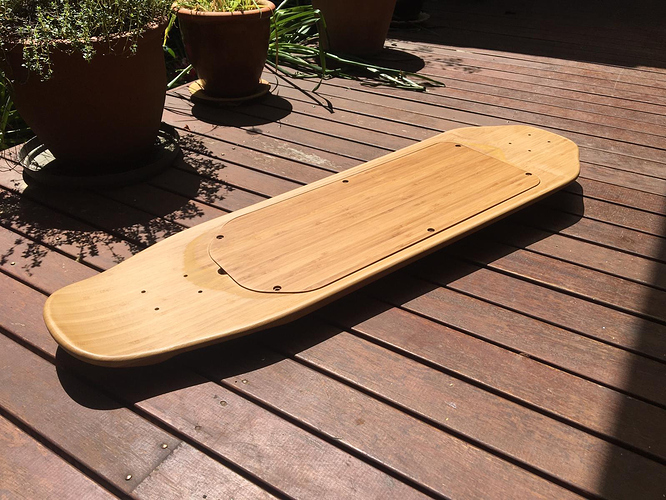 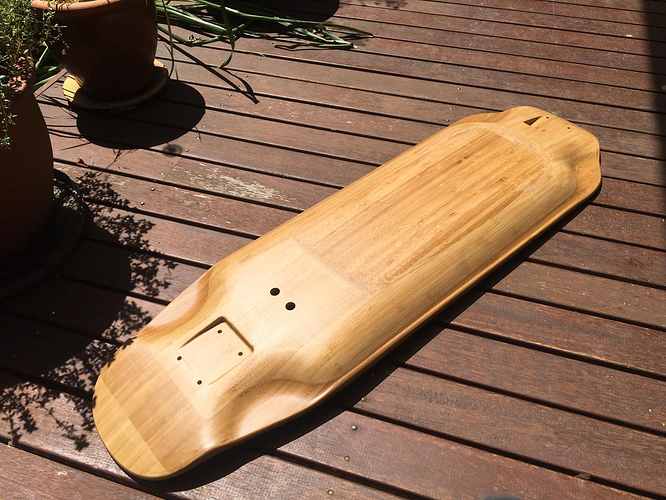 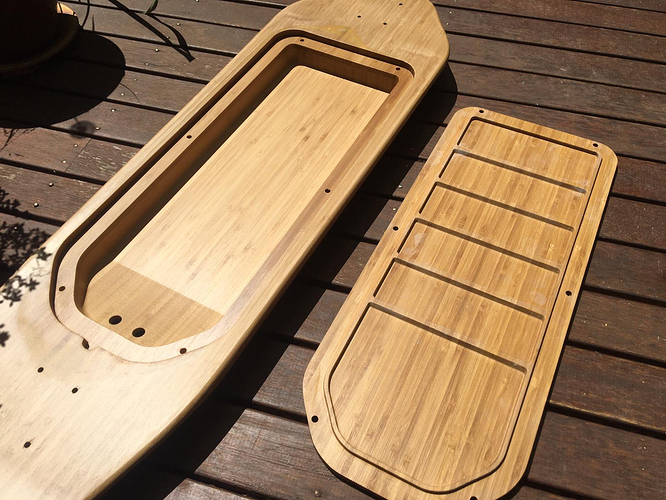 At about this time I started to think about what battery I would cram into this thing, I knew I wanted 1 thing out of it, double the range (or better) than my Backfire G2T, which has a 10s2p 30Q pack. This meant either getting some type of 26650/40T pack, or a 10s4p 30Q pack. I also had the dilemma of not having any resources or knowledge regarding battery building, and it also being something I wasn’t particularly keen on trying out, considering how expensive it is and explosion/fire risk of it all, so I started to reach out for builders who would produce one for me. @glyphiks Initially didn’t have time to do it but eventually made up some time and produced an excellent battery pack for me, as documented in this thread.

Glyphiks delivered the battery to me without balance wires or a BMS, I purchased a dickyho 10s BMS and went to town with balance wires. 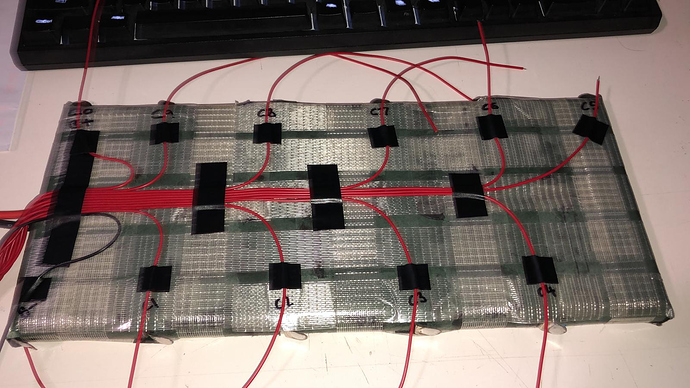 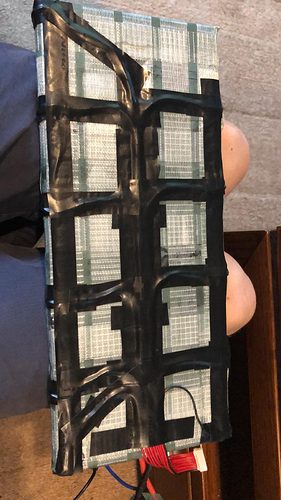 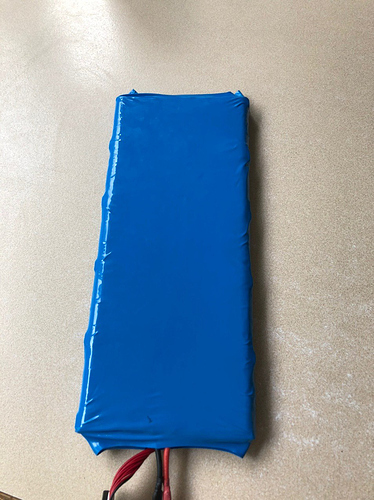 The Trucks and Wheels

Standard Caliber II’s and Caguama 85mm 83a, nothing interesting here (other than nice pictures). 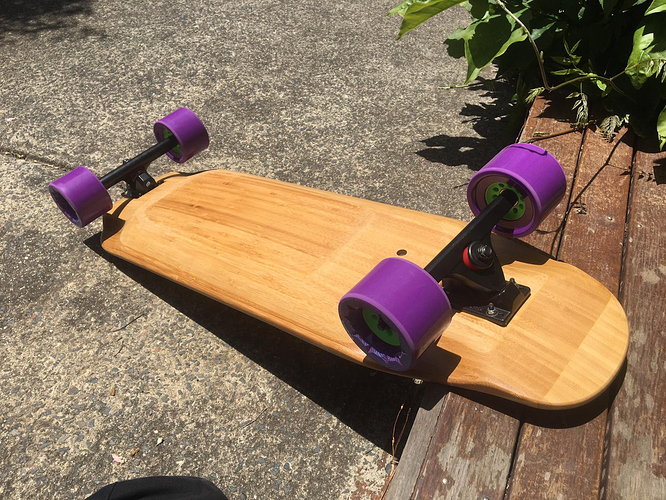 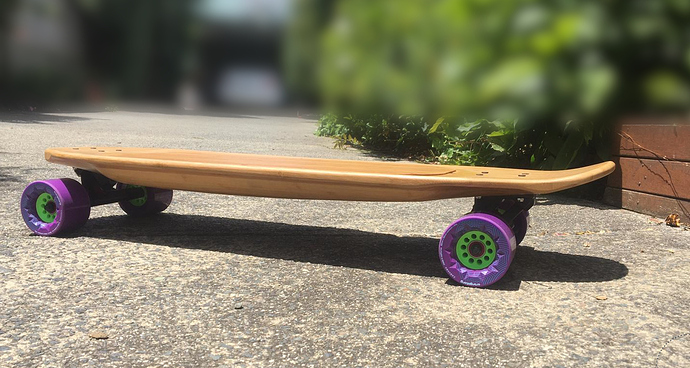 Jamming everything into the Neo was definitely no easy feat, with the battery taking up over 85% of the available space. 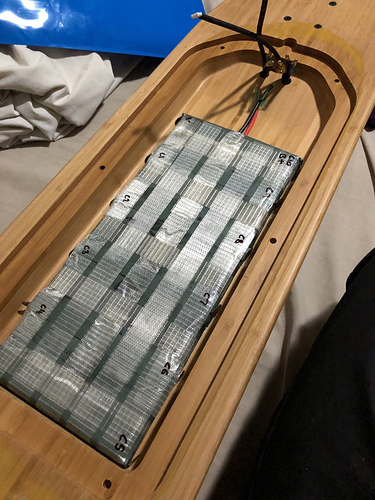 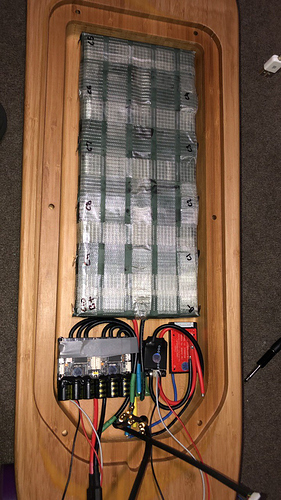 I ended up having to modify some weird stuff like the antispark switch as it was too high. 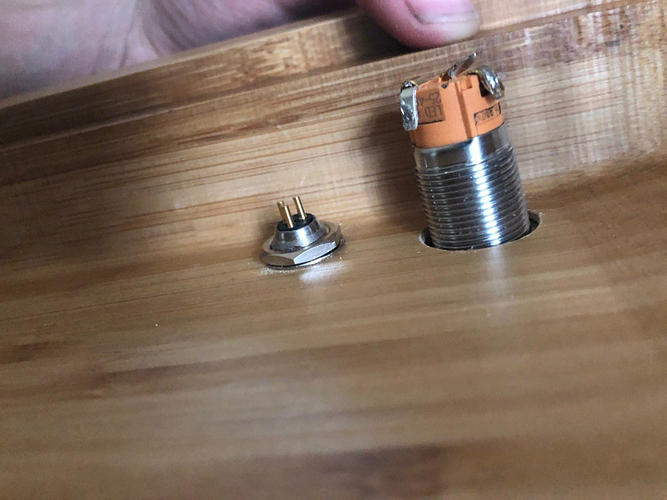 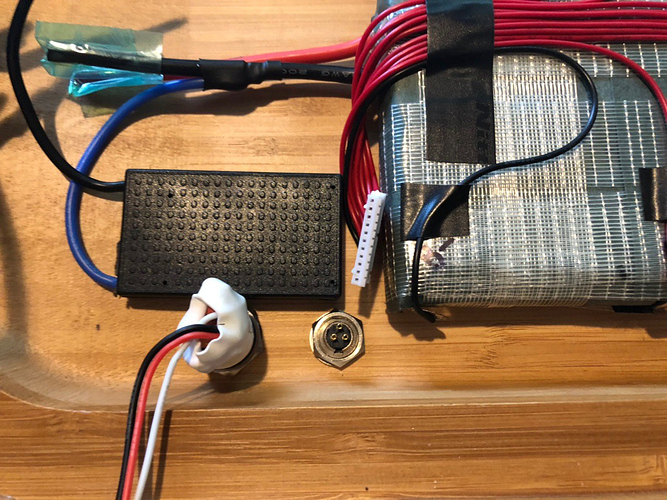 Eventually I managed to squeeze it all in, its tight. 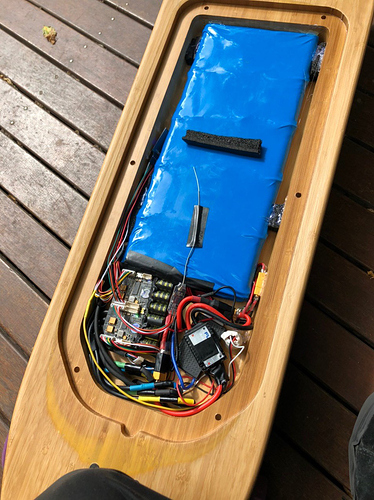 The lid even fits!

Of course I went for a test ride 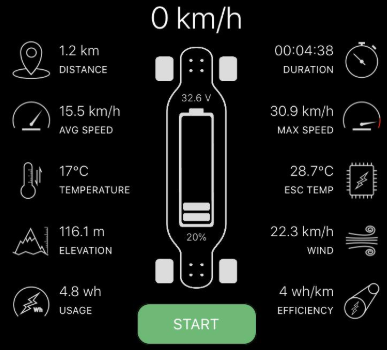 About half way though aforementioned test ride I lost some power, concerning… stupidly I didn’t stop and actually inspect things and carried on home, when I got home I realized that the grub screw holding the motor mount onto the trucks had come out. Time to spend ages finding a grub screw on a kinda busy road just after peak hour… 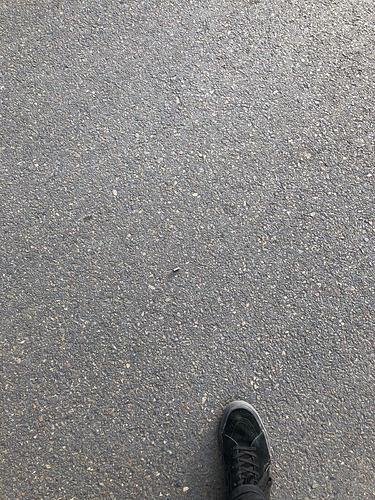 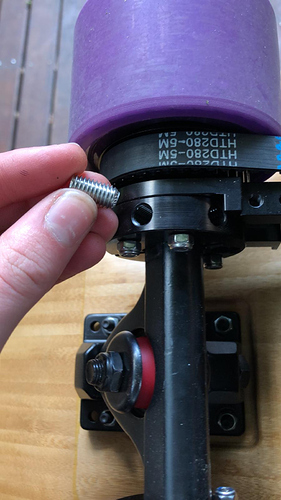 After I found it i proceeded to liberally apply locktite and torque. That won’t happen again.

I didn’t really want to deal with another charger so I did something that many people will balk at, cut the backfire charger near the connector and soldered my own inline, so I have one power brick and a couple of tails to connect different boards. I decided to use Mini XLR as my ‘standard’ power connector, as its rated to 5a per pin, with 3 pins and a shell I can theoretically pull up to 10a on it, not that I’ll need it with my 2.5a charger.

After a few days of riding it’s going really well, such a huge improvement over my backfire, I’ve charged it once this week and I’m down to 85%, it handles really well and rides like a dream, will be better once I obtain some blue cags though. Here’s some pics I took while waiting for a train 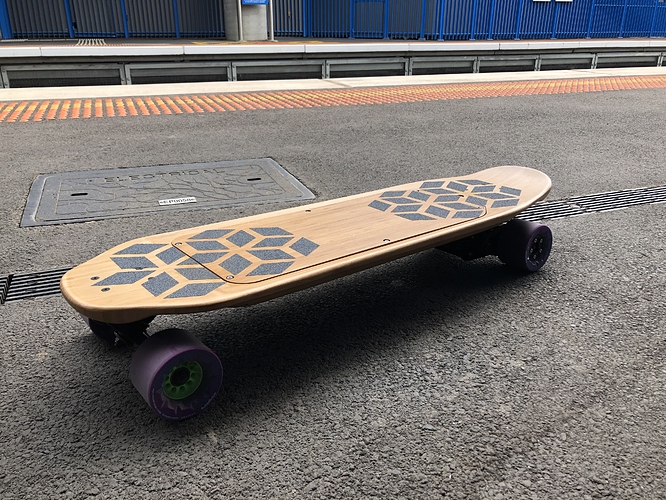 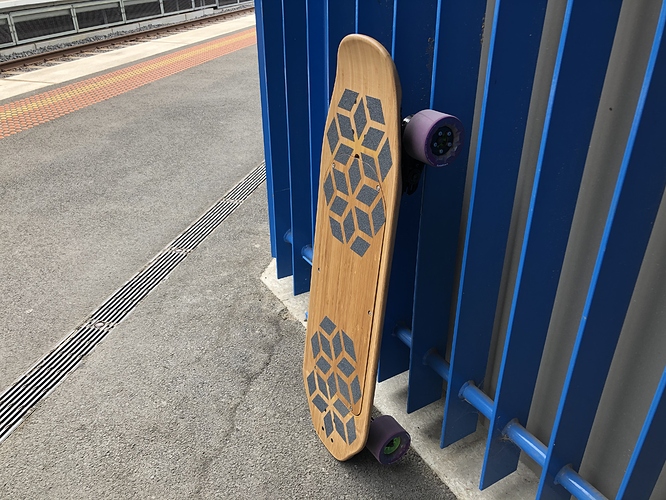 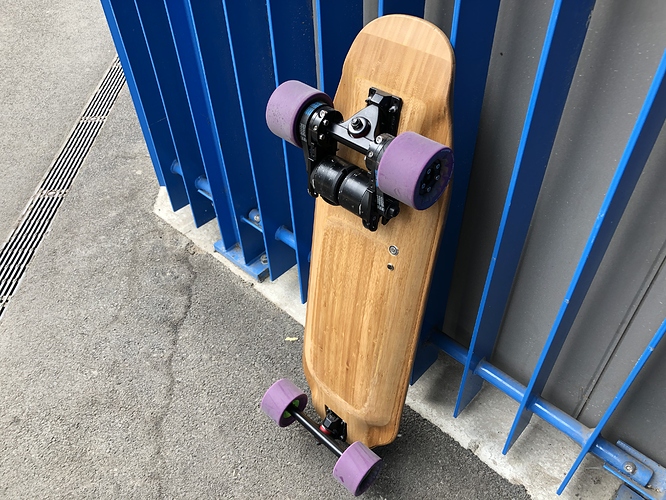 Thank you to @jeffwuneo for his amazing deck, amazing customer service, and willingness to do almost anything to benefit the community.

Thanks to @glyphiks for making my battery and generally being helpful throughout the whole build, the modular battery concept was a very good idea but its unfortunate it didn’t end up working in this deck, hopefully it’ll work better on more conventional decks.

Thanks to the all the members of Esk8 Melbourne for dealing with my stupid questions and constant messages at weird times.

Thank you @monoxane for kind word! It look great for finish. Please riding safe with helmet.

If at some time I perfect the modular battery scenario, we can talk about swapping out your current battery. I have ideas (thanks @ZachTetra) and it doesn’t seem as far out of reach as it did after my failed attempt

Now I need to finish mine so I can race you

Nice build!
I want to see the charging connector from outside. 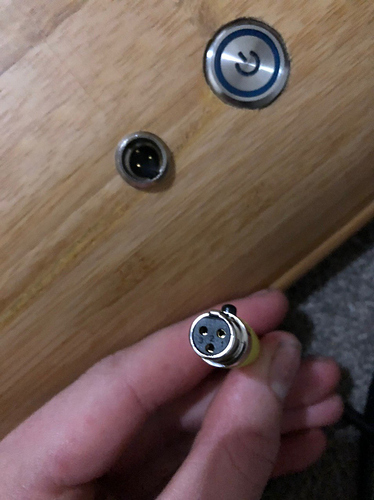 Ignore the rough edges around the power button, I had to do some dodgy things to make it vaguely flush…

Wouldn’t the charge port on the board fill up with dirt as it is exposed?

Very nice for a first build! Just a couple of nitpicking comments:

Yea i’m still working something out for that, I’ll probably modify a rubber plug for a different connector to fit or something.

I got the purples simply because they were in stock and on sale for under $100aud, I intend to get a set of blue cags for everyday use and keep these for ride n slide nights, but until I get a good price on the blues I’ll keep using these.

I used red locktite on the truck mounts and blue on the motors and pulleys.

I used red locktite on the truck mounts and blue on the motors and pulleys.

Check the Boa Sigma, those would look rad, wider than cags

They only exist in pictures!

Awesome build, perfect for day to day use

The blue Caguamas are awesome, but keep in mind that if your area has sharp rocks or anything that cut the wheels they chunk like crazy after a while