The Great 2000km+ Esk8 Adventure Into The Arctic Circle

So I’ve been thinking about doing this little longer distance journey/adventure on my Esk8. 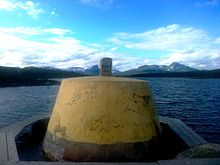 Three-Country Cairn (Finnish: Kolmen valtakunnan rajapyykki, Northern Sami: Golmma riikka urna, Norwegian: Treriksrøysa, Swedish: Treriksröset) is the point at which the international borders of Sweden, Norway and Finland meet, and the name of the monument that marks the point. It is an example of a geographical feature known as a tripoint. A monument of stones was erected on the site in 1897 by the governments of Norway and Russia (which was administering Finland at the time). The Swedish could...

The three country cairn is the point where the borders of Finland, Sweden and Norway meet right up in tip of the Finnish Maiden’s arm and in the arctic circle. 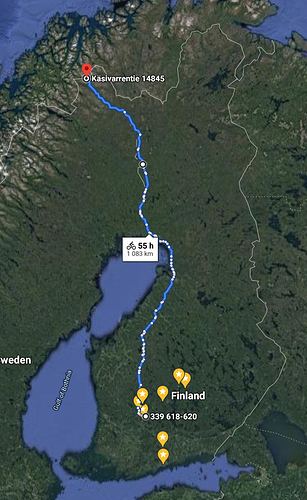 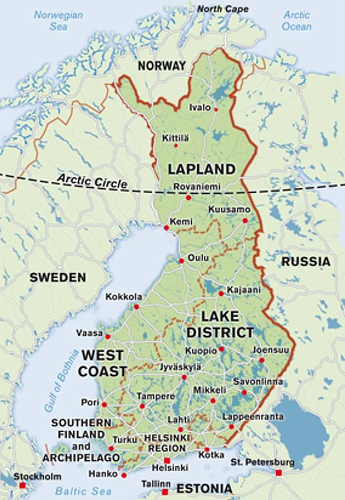 The distance from my town is about 1100km in one direction using the recommended route by google maps and avoiding crossing onto Sweden’s side when in the far north. Most likely the actual distance will be longer, as I most likely can’t actually keep following the shortest route to my far destination.

So, I can already hear the questions popping up in your minds about “how am I going to actually be able to do this”? Well you see, extraordinary distances require extraordinary ride ranges before needing to charge. Small pack (energy wise) and quick charging is not an option as you need to find too many places where you’re allowed to charge and we will be going through the Finnish countryside and I’m not looking into knocking random people’s doors asking if they could spare me a crumble of electricity.

No, I need a lot of range capability with one charge with the ability to charge up to full over night. This gives me more flexibility in planning my route.

So I need a pack that is capable of getting me the distance I need.
How much distance exactly?
Anything above 200km+ per charge minimum. Now I have this little pack in the design phase that would consist of 432 pcs of Samsung 35E cells (high capacity) arranged into a neat 12S36P configuration. This would give me roughly 4.5kWh of energy capacity.
How much range can I realistically expect out of this?
Hard to exactly say with the actual travelling gear aero wise, but if it’s warm, I have good tire pressure, keep my belts not too tight, travel at a reasonable average speed (~18-20mph/~30-33kmh) and eat a lot of beans to engage boosters for maximum efficiency. It should be able to do in the neighborhood of 300km per charge with it.

How are you gonna charge it while on the road?
While of course using personal friend connections where possible during the trip, it won’t still be enough to cover the whole distance (I have couple friends near Oulu in the middle of the trip) between points, so how am I gonna charge in-between these places? 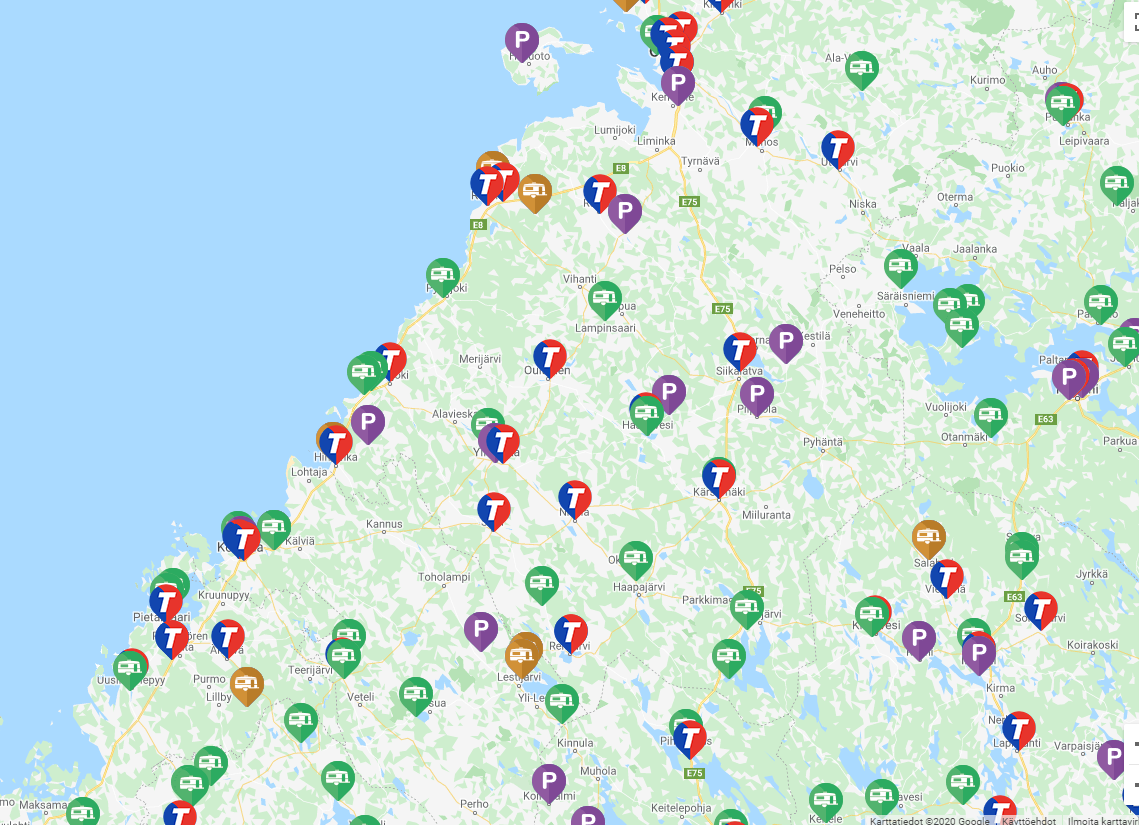 These places are dotted all over the place like pimples on a teenager’s face. Most of the places are able to provide electric poles for RV-Campers. Now I have an option. I’m going to be carrying a sleeping bag, a hammock and a tarp with me so I can essentially sleep in any forest with Everyman’s rights ( https://www.visitfinland.com/article/everymans-rights/#3836d673 ). The camping sites usually offer either a tenting spot or a car spot with prices being 5-10€ for tent spot and 20-30€ for electric spot, so not really expensive even with the car spots. I’ll most likely try to get a tent spot and then try to sweet talk someone to allow me to charge my board. If not I’ll get a car spot to just charge my board.

There’s gonna be quite an amount of gear I will be needing to take with me from spares (belts, inner tubes), tools, camping equipment and clothing. But in the end this shouldn’t really be anything that couldn’t be overcome in my view at least.

EDIT:
I need to hop off, as I’m gonna go sleep in my hammock in a nearby forest to test the gear out, as the weather has finally warmed up, so nights aren’t actually near freezing in temperatures. I’ll probably write more tomorrow and reply to people’s questions.

Wow this is awesome! Now you can do what the guys did with Mboards garbage except do it right lol

Wow! This will be quite the adventure!
Onnea matkaan!

Ambitious! Do you have any other plans for the deck besides the battery? I’m thinking you’d want a trailer for all that battery and gear… 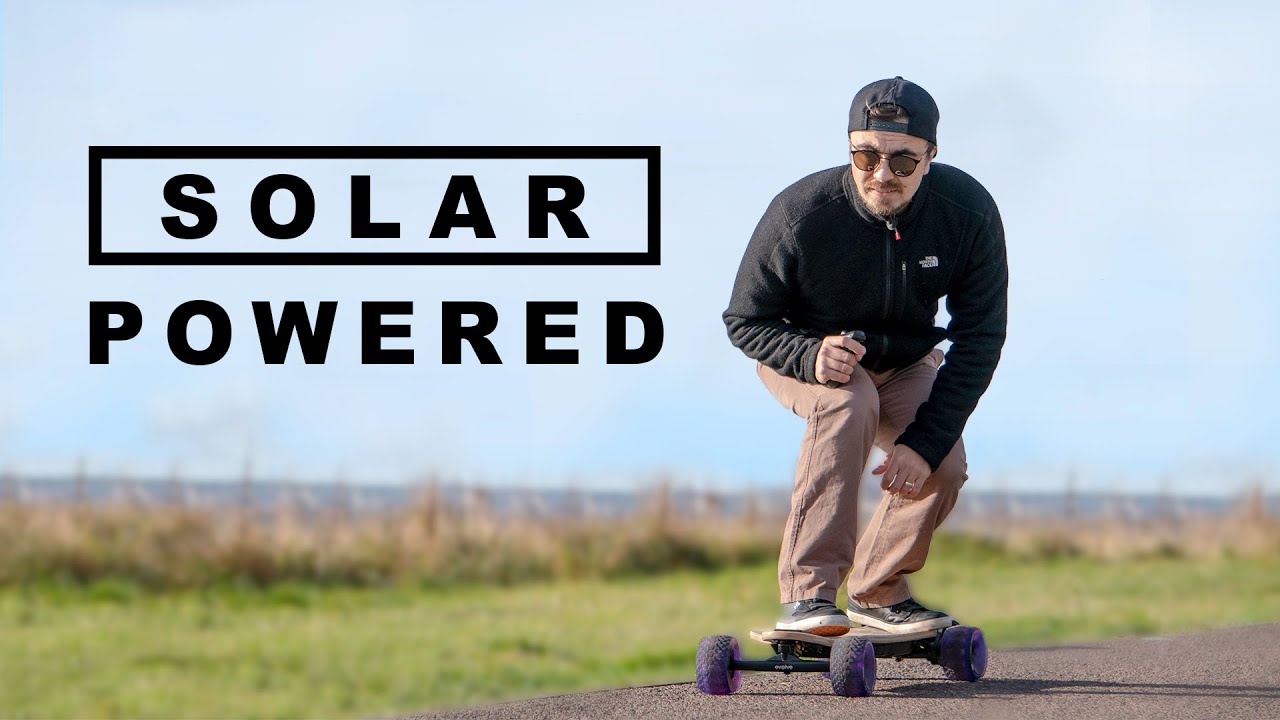 One thing is if you are making a multi kilowatt hour pack perhaps it would be better to find some large capacity EV cells rather than 400+ 18650’s.

Paging @Riako he did cross country France, maybe he can chip in

Hell yah man! Sounds similar to what the French guys did a while back. It will for sure be an epic journey.

I want to do something like this myself someday.

What board are you going to use and what will be the weight of it with that crazy battery? Will you go alone?

Noped out of the forest last night after about two hours (1AM/1:00), as I realized I was starting to get cold from the bottom side of the hammock. The sleeping bag I was using is meant for quite warm temperatures, so I’m gonna try again this night, but take some extra clothing and insulation stuff and test how much I need to add under me to stop the cold seeping in from underneath the hammock. 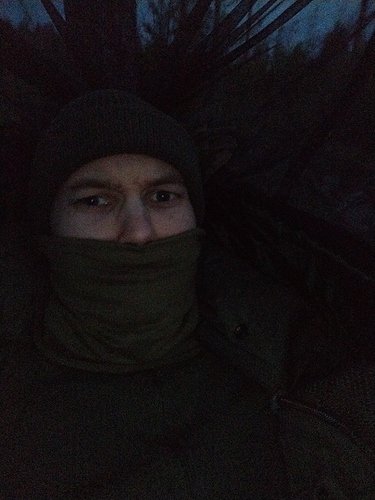 Then once I find a setup that I can actually sleep in, I can decide if the extra stuff is or is not worth it due to extra carrying space required and if it would be more efficient to just carry a colder climate sleeping bag.

I was also taking video on my phone, but discovered a stupid 8 minute limit on the video length, so I missed a large part of the recording as I had set the camera up to film me. I’ll try again tonight and see how to get around that limitation.

Do you have any other plans for the deck besides the battery? I’m thinking you’d want a trailer for all that battery and gear…

Packing all the gear with me and the board is going to be a bit of a challenge, but I believe doable. Just need to smart about how to pack everything… I have thought about the trailer concept, but at this point I feel it’s a bit of an overkill, maybe in the future if I decide to start venturing to middle Europe… Well maybe get this done first.

Yes, as a concept and for short ranges it works, but he made a one day ride that was 60mi/100km. I’m going easily over ten times that distance and it will be a multi-day effort. He is dedicating all/majority of his backpack space to the panels and the charger. I don’t have that much space to spare, as I need to carry camping gear, extra clothing and tools/spares with me.

One thing is if you are making a multi kilowatt hour pack perhaps it would be better to find some large capacity EV cells rather than 400+ 18650’s.

I’m essentially just making a bigger pack with the style that I have made smaller ones so far. Point is that the 18650 gave the best packing efficiency into the enclosure I’m building it into. 21700 wouldn’t have fit as efficiently.

What board are you going to use and what will be the weight of it with that crazy battery? Will you go alone?

Custom mountain-board and -deck. This is my 5th board that I have built so far (old ones recycled for parts) and I got it done 2018. I now have over 7000km+ distance on it and have it pretty well dialed in.

Below is a couple of pictures showing my current 10S6P pack and the marathon monster pack. The small pack has been with the board since I finished it, so it has done over 7000km. It has lost about 5-7% capacity from new (20.0Ah -> 18.8Ah), as I do capacity tests on it every now and then to track it’s degradation. I did 44km on a single charge on it couple days ago.

Now the monster pack is gonna be a bit of a squeeze to fit to the board, but it should fit and I feel that I can still stand normally with it between my legs. I’ll be tying it to the board with a cargo strap like I’m doing with small pack (need look into the specific execution later). I’m probably gonna move the foot straps a little bit more towards the ends. I am planning on strapping some of the gear on top of it during the travel (sleeping bag pouch and water bottle at least).

I love this idea mate! I’m keen to do something similar myself one day.

Consider hammock under quilt, you attach it under the hammock thus no crumbling of insulation

You should add a phone charger to your board, get an unlimited data plan, and live-stream the whole journey. (And hope no crazy people come find you lol)

Sick idea. I envy you. What an adventure! 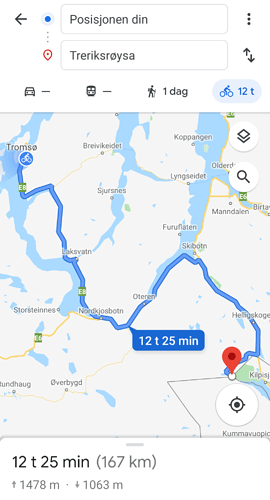 Hmm…would have been doable from here

You could make one of these range extender trailers: https://en.reset.org/blog/ep-tender-trailer-helps-electric-cars-cover-long-distances-04032017

I wasn’t thinking 21700’s I was thinking of Nissan Leaf cells or something in the 20 ah range.

I wasn’t thinking 21700’s I was thinking of Nissan Leaf cells or something in the 20 ah range.

I took a look at the Gen2 Leaf cells ( https://www.secondlife-evbatteries.com/nissan-leaf-1670wh-module.html ). They are good value for the price, but I would then have to build another enclosure for the cells, which I don’t really have tooling or materials for…

You could make one of these range extender trailers: https://en.reset.org/blog/ep-tender-trailer-helps-electric-cars-cover-long-distances-04032017

Main problem with that trailer approach is that it might be a bit bulky if I need to do city riding, sharp turns or off-roading

what will be the weight of it with that crazy battery? Will you go alone?

depending on the final implementation the actual cells are going to be around 22-25 kg + whatever the enclosure housing them will weight.

At the moment I’m planning on going solo.

I don’t think what you are trying to do is possible using just a single board without a trailer.

A small trailer should not greatly limit your maneuverability anymore than carrying all of the things you will need in a backpack will.

Why don’t you simply shoulder a backpack - much easier than a trolley, no?