This was my very first build, and honestly it’s a disappointment. It’s a mountainboard meant for all-terrain, but it’s neither practical for pavement nor offroad.

Deck: MBS Colt 90X, bought off MBS, comes with the handbrake assembled.
Trucks: Swapped out the ATS-12 trucks with Matrix 2 Pro with yellow shock blocks. Originally came with orange and red shock blocks.
Tires: Stock T1 Tires and fivestar rims from the base MBS Colt 90X board.
Mounts: Boardnamics Mountainboard Mounts for Matrix 2 Pro trucks. Solid set of mounts, would recommend.
Drivetrain: Belt drive, 18T motor pulley from Boardnamics, 72T 3D printed pulley made from PETG.
Motors: 2x 6374 Torqueboards. Had to swap out the can on one of them for a Janux flux drive can.
ESC: Prototype Haggyboard Dual VESC 6. This is basically ready for production, but needs more testing on the 4.x firmware versions.
Antispark: Originally flipsky smart switch, now Prototype Haggyboard ToughWire Antispark. Smart functions work so well I never have to hit the push button. Antisparks are ready for production, which is planned. Forum testers have not reported any issues.
Battery: 10s SPIM08HP lipo cells. They pack the power, but they’re huge and lack energy density. They were cheap for how much power they put out though. Wired with a 70A fuse and a charge-only BMS. Needs a high voltage cutoff to prevent damage (most of the their capacity is in the3.6-4.3V range).
Remote: Flipsky VX1. Works well enough and never had an issue with the remote.
Enclosure: Pieces of aluminum hacked together into a box.

Why this board is a disappointment

The enclosure is ugly AF and is wide open in the back– This is mostly my fault, but it is a really bad idea to flex lipos and I need to have them sit flat. The ESC also barely sticks out the end, so I don’t have an easy way of sealing up the enclosure, and even if I did, I service the thing so often it will hardly be dust resistance or water resistant.

I can’t turn on this thing– Even with yellow shock blocks with no compression, I can barely make a turn around a cul-de-sac. I removed the footstraps for reasons that I will detail below.

My dumbass bonked my head on this thing– Back when I was running hoverboard hub motors reterminated to delta configuration, I decided to speed test it without a helmet, yeah, I am idiot. Got up to 21mph while strapped in with the bindings and did a full 180 flip with the board and bonked my head on the concrete. Racked up some hospital bills. Despite flipping 180, the board kept running as if nothing happened. (I padded down the battery with PU foam and bolted the electronics down). The enclosure is ugly but rugged as hell. Removed the footstraps after that incident and never putting them back on.

I can’t stay on this thing when offroading– Literally the main purpose of this board is to eat grass and go offroad. Without the bindings I can’t stay on top of the board going faster than 8mph. Doesn’t help that the enclosure has a gaping hole in the back. The brake cable is also slightly too short with the Matrix 2 Pro trucks so I have to hold it a bit uncomfortably while riding.

Seeing this thing in my garage makes me sad.

Expect a sale /part-out thread in the coming weeks. 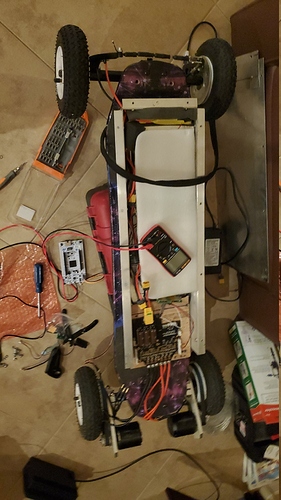 This is great. What doesn’t work can be equally as useful as what does at times. Thanks for sharing.

Lol me with everything I build. The honesty is refreshing

Hm, so what is the number one issue here that can’t be fixed easily? The trucks?

Isn’t it a bit unfair towards the board calling it a disappointment because you crashed without a helmet?

Or did it behave oddly?

Maybe try bindings off road and no bindings on road? Seems like that would help.

@Venom121212 correct me if I’m wrong but this deck isn’t meant for the matrix ll trucks is it?
The angles seem wrong. Looks like it’s made for those MBS tkp style trucks.
Probably why you can’t turn

Yeah the angle just doesn’t look right to me.
I bet getting some wedges to get it at the proper angle would make a big difference in control.

A new deck or angled risers are expensive and I don’t need an offroading board, so I want to get rid of this thing.

By the sound of it, it looks like I need to do a part-out.

What kinda board do you wanna build? Up for any trades if you decide to part out?

I am planning on one more build that I have some of the parts for.

I need a pair of the new avio gear drives, pair of kahua trucks
one TB 6380 motor.
A remote.
12S BMS high side switching.

Going to use the rocket core integrated deck with a diy 12s4p VTC6 battery.

Yes those trucks are at a very incorrect angle which is why you have no turning. Fix that and you’ll be so much happier.

Any suggestions on angled risers? If I fix the angle will I be able to sell the board as a complete?

I’m not sure you can get a riser with enough angle while still having the bolt holes line up right, @Venom121212 had a very similar problem with the angled risers. The best fix is getting a mountainboard deck with tips in the 25-35 degree range (but they’re usually pretty expensive). Higher degree tips provide more turn. I’ve been using a 35 degree deck on my Matrix 2’s and it’s super carvey.

Is it worth just getting a new deck to sell the board as a complete?

Are the markone ones the right angles? Still probably angled enough for one of those risers to work enough if they aren’t quite 25+ degrees.

If they are @Gamer43 gots to get one. Super cheap.

Just want to clarify, even if this build stops being a disappointment, I still want to get rid of it.

That’s what venom has his matrix trucks on now. He loves it far as I know