Backstory: Basically I’m working on fixing up an electric motorcycle, so in my search for SUPER POWERFUL high voltage speed controllers I found this company. High voltage, high power, my kinda thing. But I saw something referenced on their website about the “next gen controller”

Much to my surprise it appears to be vesc software based and will have some very interesting features. Like a built in boost converter. You could literally charge your board off a 12v car battery using this. https://www.youtube.com/watch?v=F64T9DeuCGA

Other than that, normal features of a vesc, but more focused on ebike and emoto applications with field weakening for higher speeds. A feature I’m not sure esk8 has adopted yet for some reason.

Disclaimer: not affiliated with powervelocity, but if they want a full, high production review of that 15kw controller, hook me up.

Man this looks amazing for an “ebike” build. More like e-crotch-rocket 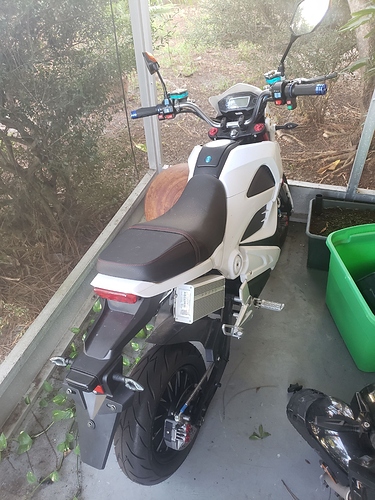 I actually got 2 “ebikes” in this package deal. The other looks like a ruckus scooter, and now has a 20s nissan leaf battery in it. Working on that video first since it’s a more simple repair. Waiting on the BMS to show up, finish some cosmetic and safety stuff, and do a full range test, before I finish the video and post it.

Though I have been daily riding it around without a bms, and it’s great fun, but I won’t be pushing the limits of range until I get the BMS.

Anyway, on the topic of power velocity. His site seems to be having some issues, it wasn’t like that earlier this month. I did manage to get into the fourm and it seems pretty dead. I think this guy could count his customers on just his fingers. Which is very odd since people always complain about how expensive and hard to program sevcon and other “industrial” motor controllers are.

Last update he posted said covid was messing with his timeline to start production on the next gen controller.

His video showcasing his proper electric motorcycle complete with “fast charging” off a J plug was pretty neat too. Had 2 eltek flatpack power bricks paralleled into the DC boost charger of the motor controller and charging his 100v battery at 35a.

High voltage 120/240v capable lithium chargers are really expensive! (you need the 240v to use the J-plug chargers). So this built in boost charger ability in the controller allows really any power supply to be used as a charger.

I’m not sure the pricing on those flatpack2 power supplies, but I think something similar could be done with the super cheap 48v15a led power supplies. Parallel 3 of those together and you’ve got an incredibly cheap fast charger.

There’s a big thread on that controller over on endless sphere.

So there is. Not sure why I didn’t find that before. Looks like I’ve got some reading to do.

I think there are several egrom projects like yours over there as well, including mine, the one with the ASI BAC4000 controller.

There’s a big thread on that controller over on endless sphere.

I was also considering that, but oh boy is it expensive. And I’m not seeing it take higher voltages.

I can’t change the motor, more current just gets me up to 40mph quicker, therefore the only “easy” way to boost speed into the 80mph range is to crank the voltage up super high. I’m guessing somewhere in the 120-150v range should get the speed I want.

The math here gets fuzzy cause there’s no magic calculator like esk8, so I’m just chucking the max voltage of the controller I can at the motor and hoping for the speed I want.

Honestly I would never want to go 80 on 12in wheels, especially on a Chinese egrom. If you plan on it, you should definitely swap all the suspension parts with OEM Honda grom parts.

I calculated the kv of my motor at about 15-16 and I think mine is probably the same motor if that helps. I also have thrown peaks of 12kw at it and it doesn’t seem to mind too much, just make sure the torque arms are up to it.

Or you use the calculator with 1:1 ratio, wheel diameter in hundreds of mm and Kv of the motor? Add bigger weight due to the bike, if possible use instead “downhill stance” to get a closer average aerodynamic.

Some time ago I asked if the charging mode feature could be ported to our vescs. But I guess people weren’t interested then…Archived: the OG noob question thread!

Odd, it’s a great feature idea that would make long distance trips easier where you don’t know what kind of power you can find.